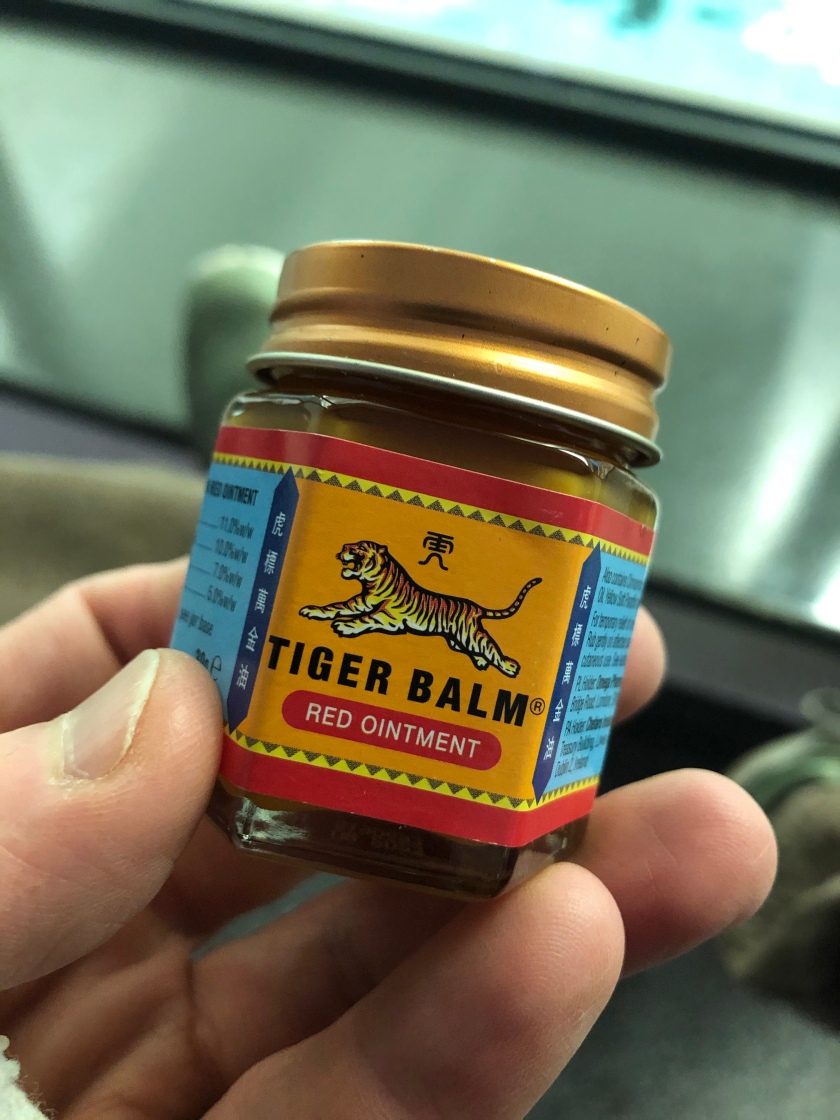 So the weekend has ended – and it’s already Tuesday. Boy oh boy are they moving at light speed again now I’m gainfully employed.

If you blink then you miss them!

However they probably pass by at such a frantic pace because I’m doing all I can to make absolutely sure that they’re crammed with fun things – which in my case usually means spending time with people I care about and doing lots of exercise. 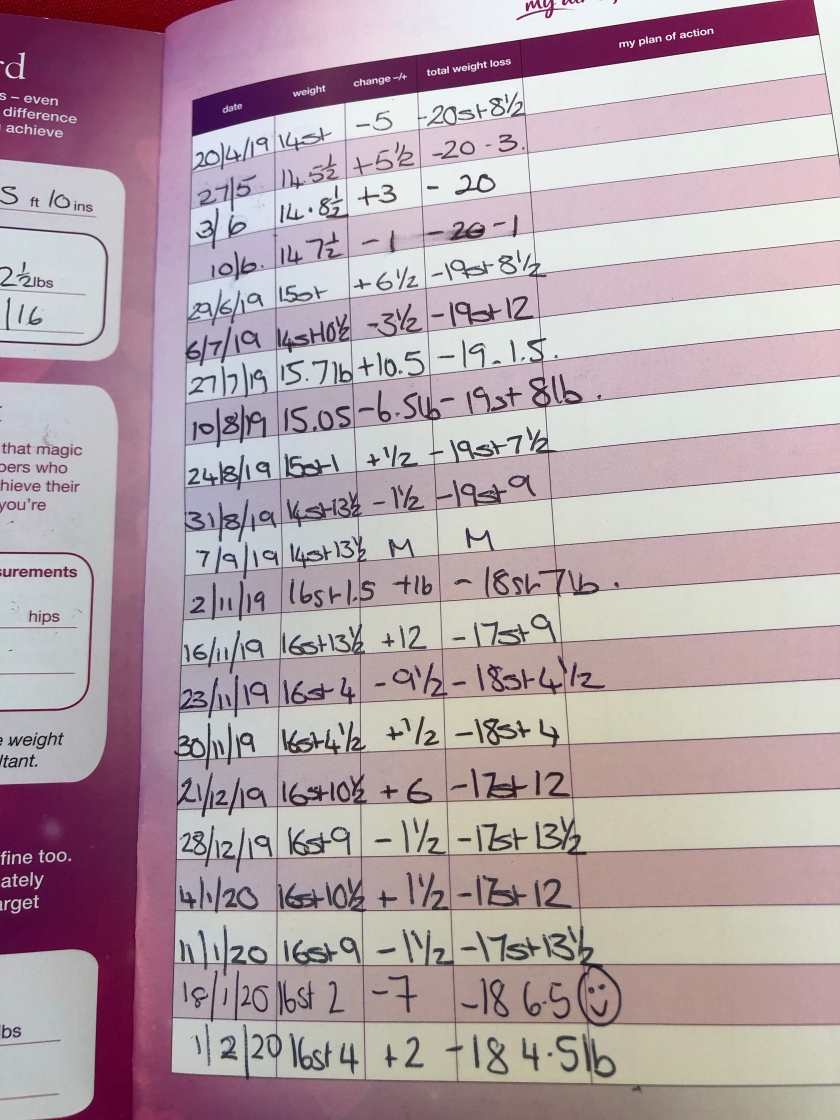 Saturday was just such a day – and after taking my now customary kick in the man globes at Slimming World (where for no good reason this week I put on not one but two pounds) we headed out to a local hotel for a wonderful afternoon and evening celebrating the 50th birthday of a good friend.

We’ve known eachother for literally decades now and I’m proud to say that he’s a mate.

This isn’t just because we share some of the same interests (we do – check out his flipping awesome cake in the above pic) but because he’s a genuinely solid and dependable guy with a sound moral compass who’s also been with me (along with his wife) every step of the way as I crawled my way back to health over the last few years.

When I was incapable of climbing up a ladder to pull ivy off my wall and out of my guttering he brought his one round, clambered up it and did the job for me.

He did this not once – but many times – and it was made all the more poignant when I realised he doesn’t like heights.

It’s people like this that you have to look after your relationships with in life. They keep you grounded, remind you why it’s important to be a good person and demonstrate how it makes others feel when you reach out to help just because it’s the right thing to do.

Now I’m fitter I try to pitch in whenever I can to repay his favours – and I hope by now he knows that he can ask me for any kind of help and I’m there.

On Saturday though I was just enjoying his hospitality (plus maybe a little too much cake) and a lot of boogies to some great 70’s and 80’s music. 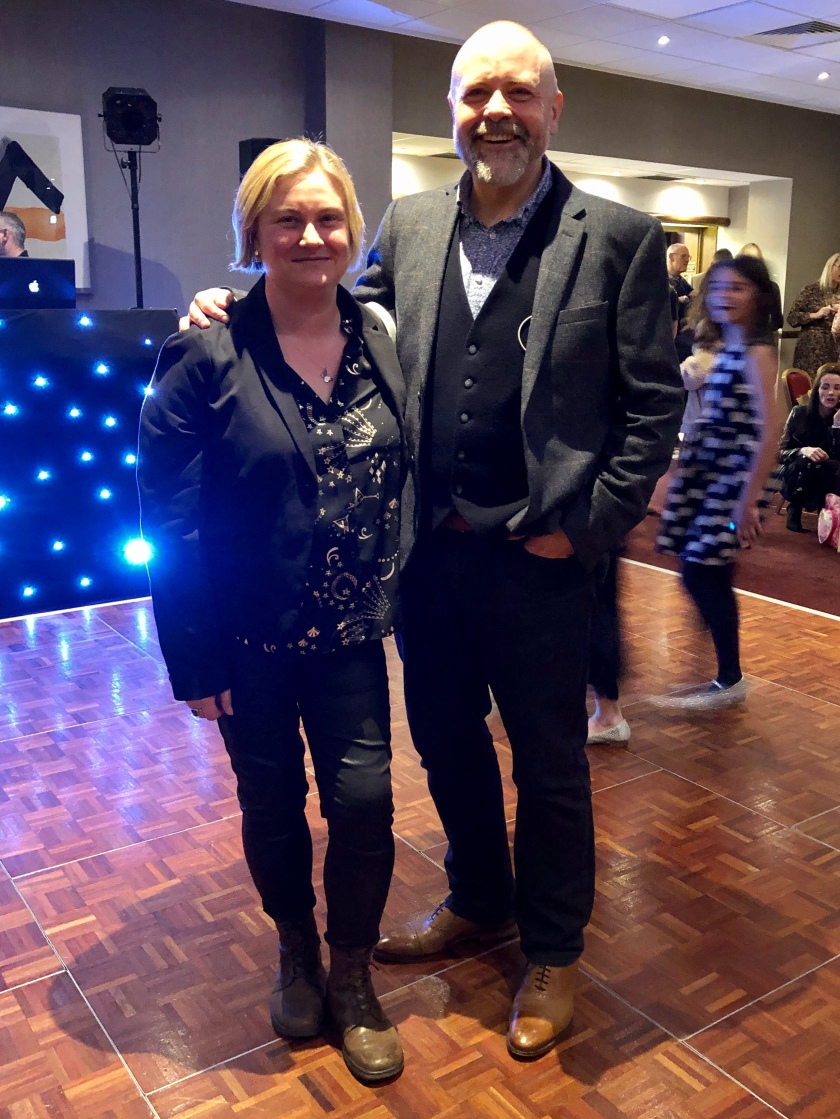 For the longest time as a teenager (and adult) I felt incapable of enjoying events like this (whoever they were for) without being completely smashed, and even when I was small enough (back in the early 90’s) to spend any length of time on the dance floor I had to have some form of lubricant flowing through my blood stream to make it happen.

These days I don’t care because I just dance and enjoy myself.

I imagine most onlookers simply wonder if I suffer with epilepsy or am a recovering stroke victim.

On the bright side if they do I’m sure the memories of my ‘special’ moves on the dancefloor will cause them to donate money to sympathetic charities when an appropriate collection box is placed under their noses.

I’m therefore doing my bit for good causes and equal opportunities whenever I step out and throw some shapes.

Rollicking about with gay abandon isn’t always a great idea though – and when I got into the car to drive home I realised that (whilst helping Angie to pack away the boxes of books and hifi bars at the end of my SW group) I’d managed to sprain my wrist.

I could barely change gear!

The pain (although very slow to arrive initially) appears to be persistent now – and for days now I’ve been unable to put weight on it or go swimming.

This morning (Tuesday) I gave the pool a go with very little success – and after a few painful lengths had to admit I couldn’t grip the side to turn, that each stroke hurt, and I could barely climb up the ladder to get out.

Looks like the only option is to keep going with the Ibuprofen gel and tiger balm (which my brother introduced me to in Starbucks on Sunday.)

It’s rather good, makes things all warm and tingly and takes your mind off the strain with it’s frankly delicious scent.

If my wrist doesn’t recover at least it’s delightful bouquet will make the task of chewing my lower arm off a little more palatable.

My brother’s taste in drinks does not appear to be quite so refined as his taste in embrocation however – and when we met at Starbucks he decided in the queue that he would try their new ‘Golden Honey Macchiato’.

Admittedly the picture on the board made it look great – however the reality was far grimmer, because not only was it a lurid dayglow yellow colour (it contains saffron) but it looked like someone had just sneezed on it when the (optional) honey was added. 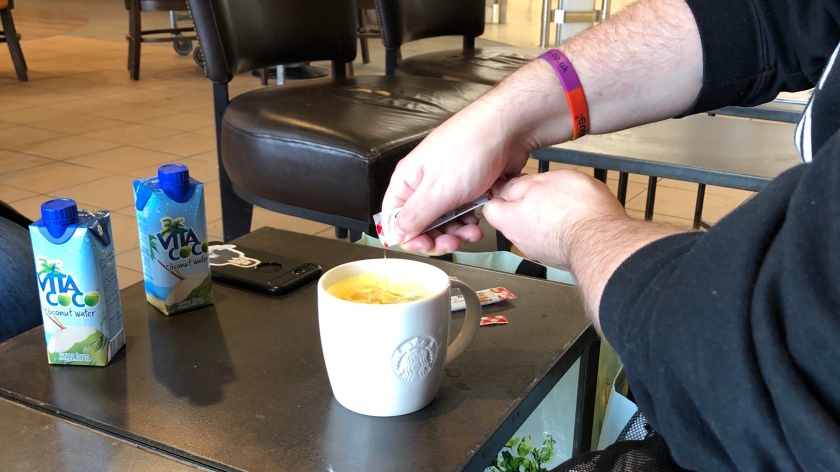 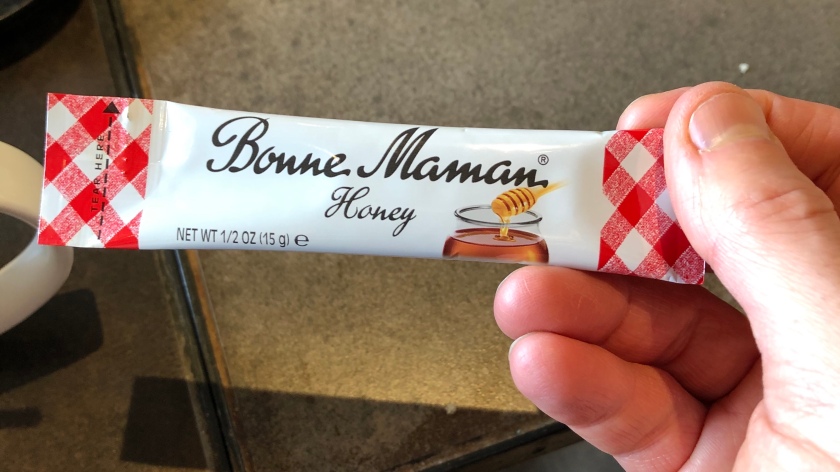 Needless to say, after a few exploratory sips (by all around the table) a number of grimaces and a lot of funny faces later the rather sorry looking cup of yellow froth was left for the next occupant of the table to dispose of.

I hate waste but I’m not sorry I didn’t drink it.

Not only did it taste like ass but it was probably wasn’t very healthy as a dietary choice either.

Tellingly the Starbucks site has no nutritional information on it’s website about this drink (at least none that I can find) which leads me to believe that it’s not going to fall under the category of a Slimming World ‘healthy extra’.

My black coffee was precisely 2 kcal – yet this sugary monstrosity (or ‘crime against coffee’ as my sister in law called it) probably had a couple of hundred in it.

I’m going to have to be super careful this week too.

If I can’t swim my usual distance my food intake has to be lower and that’s a problem because I’m used to a certain portion size (namely large).

I’ve never had to stop at 250m before and it really peeved me when I was forced to get out of the pool early.

On the plus side it cheered me up to see my partner in crime continue to power back and forth in the lanes working on her own milestones.

Yesterday she even got out of bed and went to swim on her own!

This may not seem strange to those that don’t know her, but there’s a massive change in the mornings now that she’s really getting into her swimming – and frankly I’m saving a fortune on dynamite because I no longer have to leave a lit stick under her pillow to propel her upright as I creep off to the loo.

She’s bounding out of bed at the moment like a Labrador puppy chasing 20 tennis balls.

Her swimming (since she started putting her head under water during breaststroke) has improved in LEAPS AND BOUNDS and she’s almost as fast as I am now.

The only thing that’s different that I can see is that she’s slightly slower on the turns – but her stamina is fabulous and bit by bit she’s catching up.

This morning we appeared to be neck and neck and it just goes to show that if you put your mind to something you can achieve great things.

You can also achieve great things together.

Sure – there’s nothing that either of us couldn’t achieve alone, and I’d be swimming whether we’d met eachother or not.

I’d have probably also found a way of sorting out the ivy on my back wall when I was bigger – but then there’s the absolute joy of human relationships that makes everything in life better.

We’re not meant to be separated from friends or partners – and the natural predisposition of a successful human is to be around other like minded humans. It works with Slimming World and it works with life.