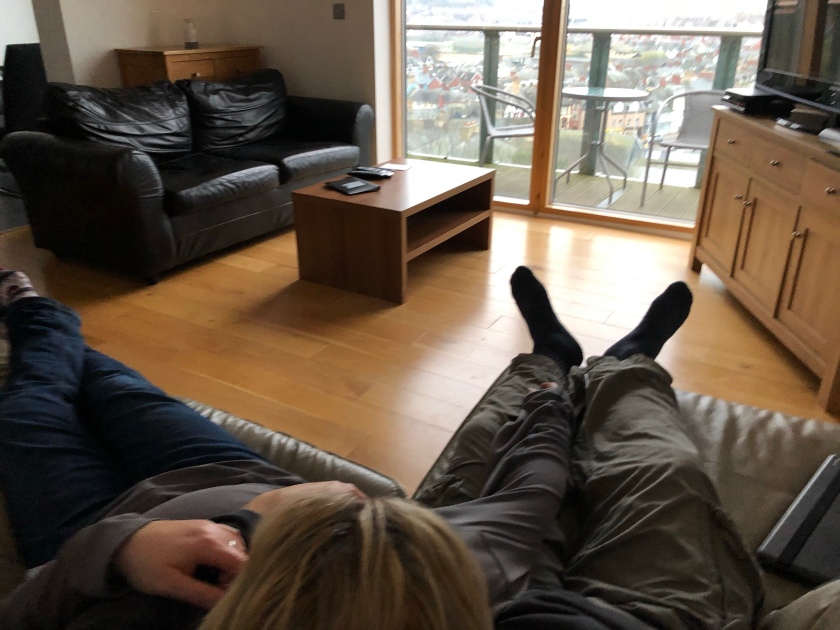 As I start this post it’s very dark outside and I’m awake.

This isn’t unusual because for over a month now I’ve been getting up at about 5:40am to go swimming in the morning.

Today and tomorrow however executive decisions have been made.

We’re having two days off – which is unusual.

This does honestly make me a little twitchy – because it means a streak will be broken in my stats.

By the close of play yesterday I’d surpassed my previous record for swims in a month – and completed 23 in January! 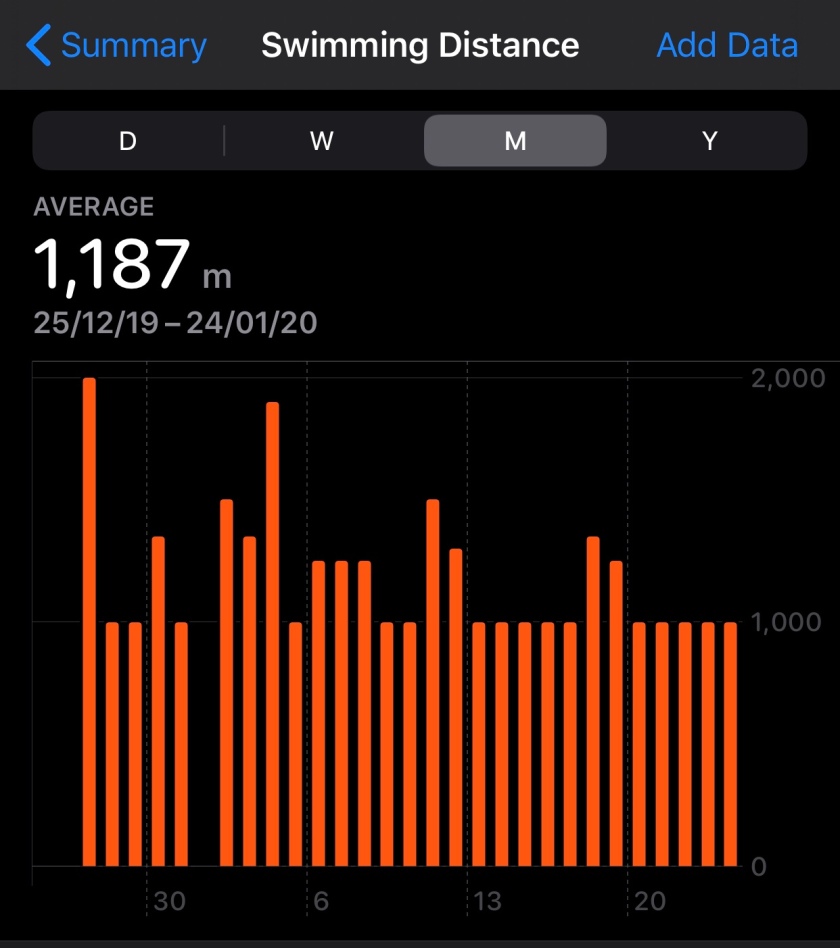 The number of swims I’ve done is one thing mind you – and even though I’m proud of this I’m even happier with the fact that I’ve never managed this level of daily consistency before.

I’m so focused on swimming at the moment that it’s crazy – and although my distance per swim is ‘only’ 1km (myself and my partner have to fit this in before work so we can’t spend too long in the pool) I’ve definitely gotten stronger by doing this more regularly.

Many people pass me in the pool (there’s a guy I know from my SW group for instance who seems to effortlessly glide past me twice per half an hour) but I don’t mind in the least.

If I compare that time to yesterday’s stats there’s simply no comparison. I no longer pause between lengths at all – and where I started vs where I am now is poles apart.

I think it’s actually pretty crazy that I’m now four times faster than I used to be.

There have been major improvements not just in stamina – but technique – because when I started I also didn’t wear goggles and I couldn’t effectively swim under water or breathe properly when I tried.

My partner was the same when I first met her – and although she was a better swimmer than I was when I started she also had the same nervousness about putting her head below the water line that I did.

We worked on this fear together in the pool one quiet morning in December.

I don’t think I’ll forget the absolute joy on her face when she swam beneath the surface with goggles on for the first time.

She’d never felt that it was possible before – but together we did it.

For almost a month since then she too has massively improved her technique and breathing to the point where she’s fast enough and confident enough to move from the slow to middle lane of the pool.

There’s very little difference between us in terms of capabilities at the moment and she’s already putting in times per length that I’d have been really proud of when I first learned the same techniques.

It’s meant that our exercise output and calories burned has massively improved in December and January – and although my average has tailed off a little since I started working it’s still pretty darned good! 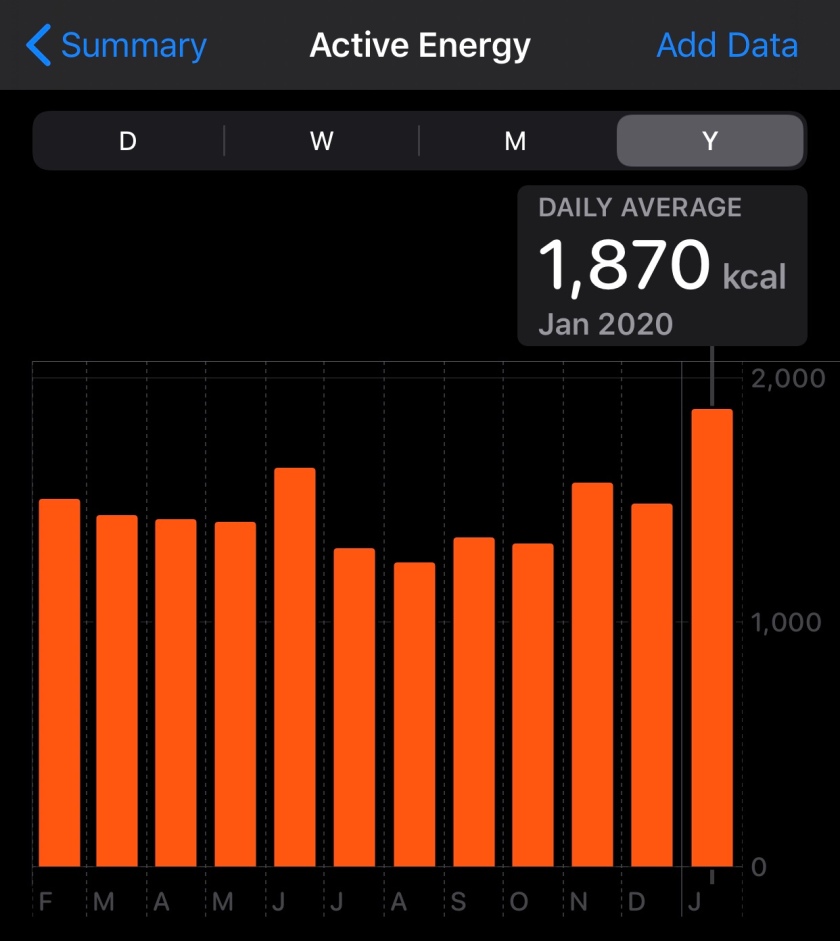 As well as having my personal swimming goals I’m also on track for Apple Watch’s January challenge – which was to walk 280.3 miles in a month. 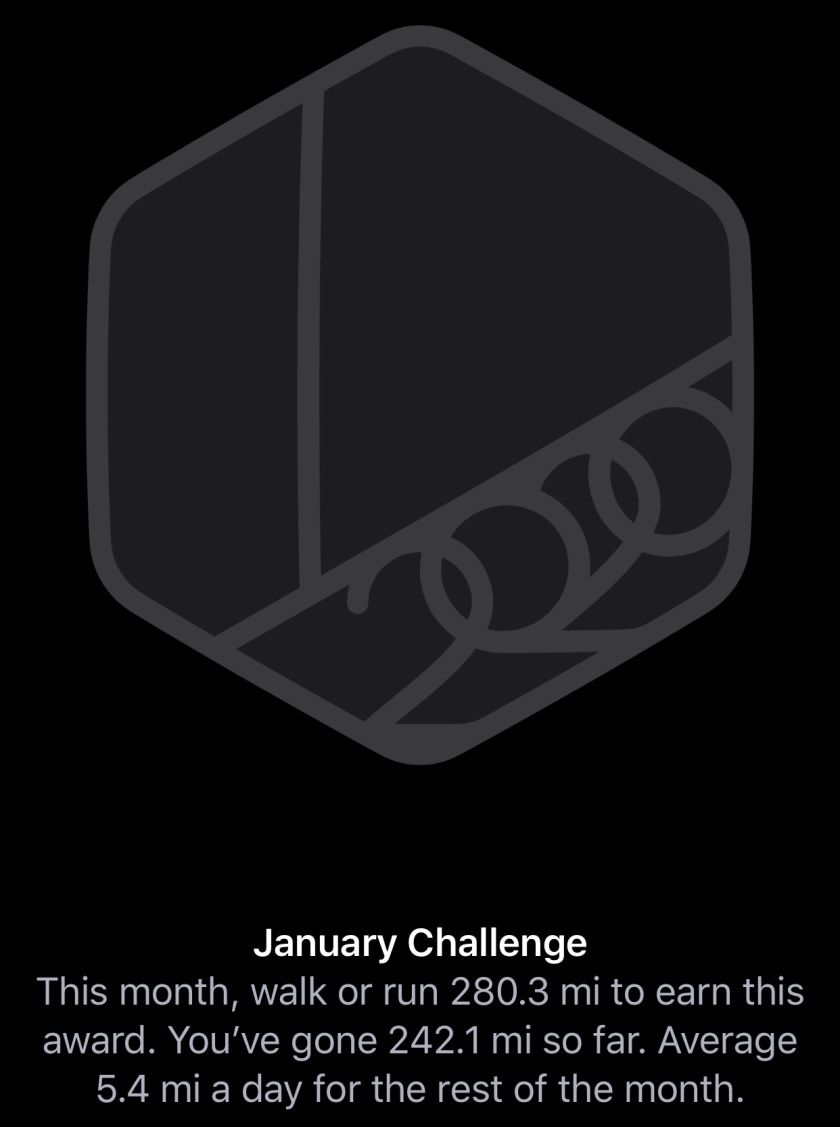 Given that I’m working again I’m absolutely stoked that I’m still managing to maintain this level of commitment to keeping fit – because it means all the difference now that I’m sitting in an office for 8 hours a day.

It just goes to show that there is time if you’re willing to try and fit things in.

I’ve also been almost 100% completely on plan – so I’m hoping for a positive result on the scales as a reward.

However – as I said earlier.

I’m also not going to group to weigh in either.

This morning I awoke to the sound of seagulls and I’m back in a town that I have a huge affinity for.

My partner and I have rented a lovely little apartment with a great view of the town for two nights and plan to spend the day strolling and mooching before catching up with family tomorrow.

The first order of the day has been (of course) breakfast – which as anyone on holiday knows is a must at the hotel.

However this is self catering…

Thankfully I love cooking and I also adore the idea of a cooked breakfast when I’m away – so I packed all of the ingredients we’d need to have a great on plan start to our day.

(The prunes on the Weetabix are 6 syns by the way in case you wondered!)

(We eat and go out – and I continue writing much later)

Our browsing has been rather enjoyable – and although the charity shops in Aber appear to be completely tapped out (it is a student town after all) we did find a really cool bargain on sale in a lovely shop called ‘Polly’ on the high street.

It’s actually one of three we discovered – with the other two being just over the road, but in the one we went into first there were a pair of boots that immediately caught my other half’s eye. 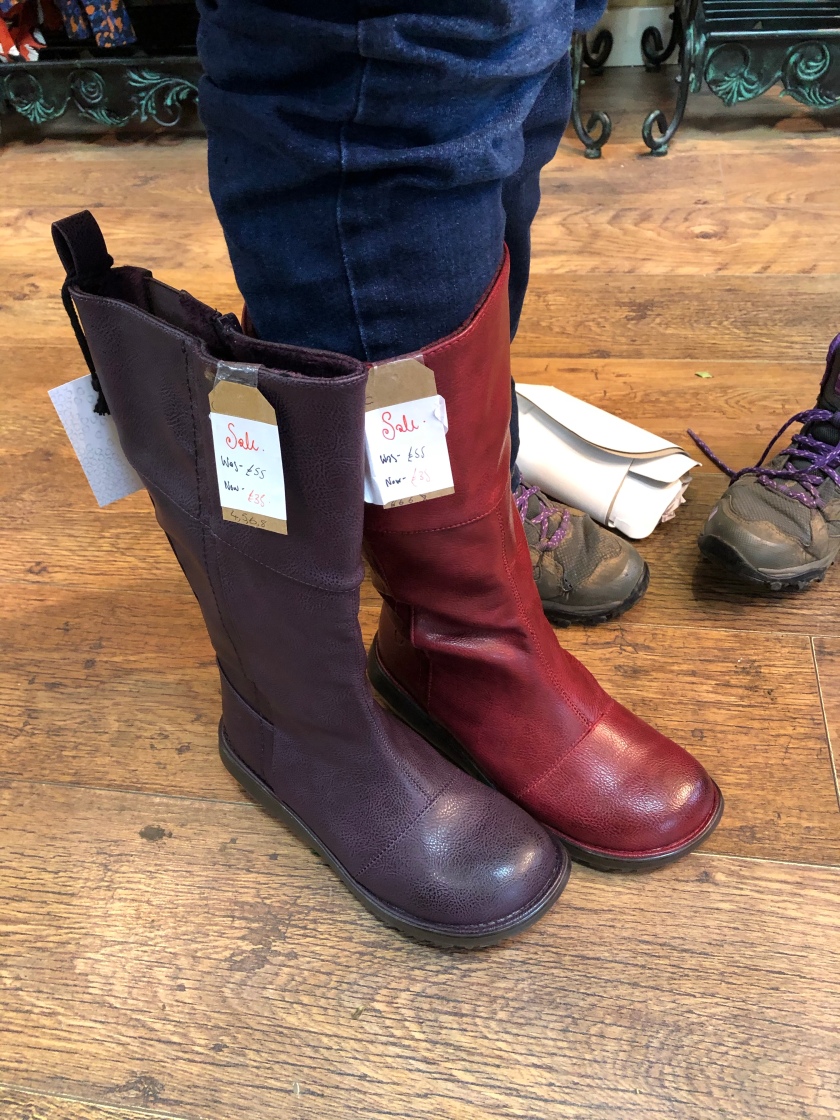 They looked super on her, would go with at least two skirts I could think of and all of her jeans. Plus they made her smile as soon as she zipped them up – so I quickly whipped them out of her hands and over to the till to buy them before she could object.

I’m a man of means now and have been gainfully employed for two whole weeks!!!

If I can’t spend my outrageous wealth on her then what’s the point?! 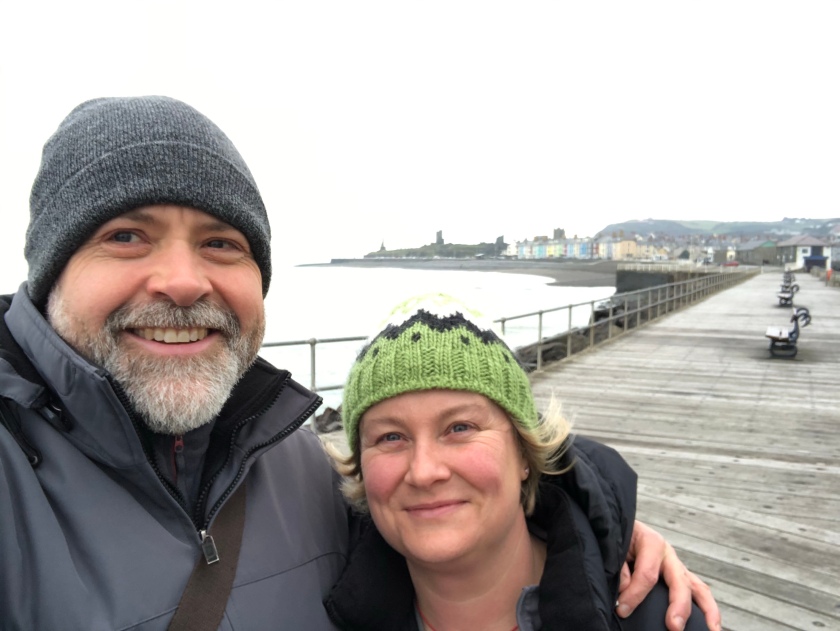 After she’d chastised me gently for being mushy and buying gifts (I in turn reminded her about the jacket she kindly bought me for the Slimming World Ball in November – link) we took a walk to the end of the pier by the harbour and then back towards Constitution Hill.

Once there we quickly clambered all the way to the top and sat down to have a a drink and a snack.

It was here that my angel of tranquility and serenity temporarily lost her mojo.

Whilst my Apple Watch showed a healthy amount of exercise (46 minutes after our lengthy walk from one end of the pier to the other and back again) hers showed only 16 minutes.

As I strained to hear the sound of the waves over the grinding of her teeth enamel I already knew what was coming.

I could see her mind working away silently on how to fix her stats.

‘Shall we carry on walking to Clarach?’ She said.

The walk there was mostly downhill – but the uphill return would be even more cardio and it would undoubtedly fill her ring to the brim.

My little ray of sunshine is not a lady to take an unfilled ring lightly – and frankly it’s one of the many reasons I love her.

Whilst I’m easily the more obsessive of the two of us about most things, there are some areas where she’s either a close second or a clear leader.

I looked down at the flask of tea that she was drinking and for a moment I could have sworn that the metal looked like it was bending under her clenching fist.

After a quick visit to the toilet (and once she’d rebooted her phone and watch) we carried on over the coastal path.

This is a lovely little walk with a view of the gorse covered cliff side below that looks absolutely fantastic by the way.

Clarach Bay itself though is just a rather desolate collection of static caravans and a shuttered up off season amusement arcade.

However if you look in the opposite direction it’s got a really rather nice view. 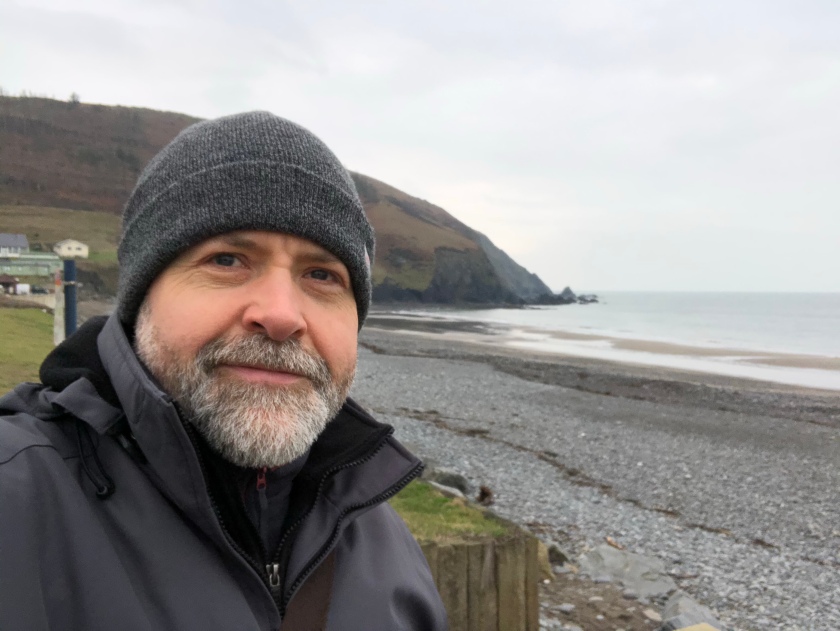 The beach (if you crop out the holiday park) is pretty cool and it’s a lovely spot (at this time of year for a bit of peace and quiet.

There’s no one around.

By the time we’d made our way back along the coast, down Constitution Hill and into town again it was clear that we were both flagging a bit – so the only clear choice was to get some lunch.

I’ve always had happy memories (from when I lived in Aber) of The Treehouse cafe.

In the 90’s it was at the top of town, then it moved to slightly bigger premises a couple of streets away. 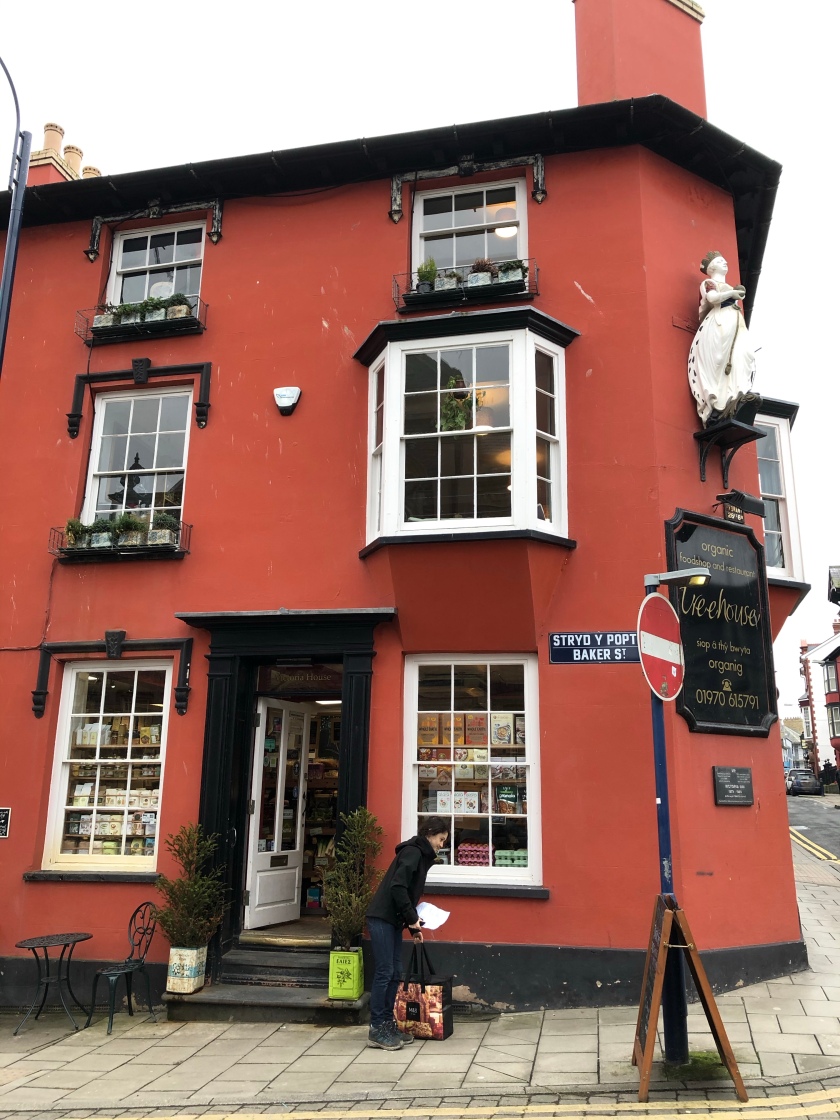 It turns out that they’re moving again soon into the old Welsh School development by the railway station and I think it’s awesome that change is coming.

They’re totally organic (although I’m not particularly militant about this in any way) and their food tastes great.

After a long walk it was just what we needed.

I have to say that around this point I practically faceplanted.

I had been up for a lot of the night thanks to a very warm room and an unfamiliar bed – and this had begun to catch up with me.

We grabbed a couple of bits of shopping and headed home to have a cuppa and a rest before tea.

It was touch and go for a minute but I almost fell fast asleep right there and then.

The sofa was super comfy, the tv was playing Star Trek TNG in the background and I was just nodding off.

Thankfully I didn’t and managed to pop in some baking potatoes and set a timer on my watch. 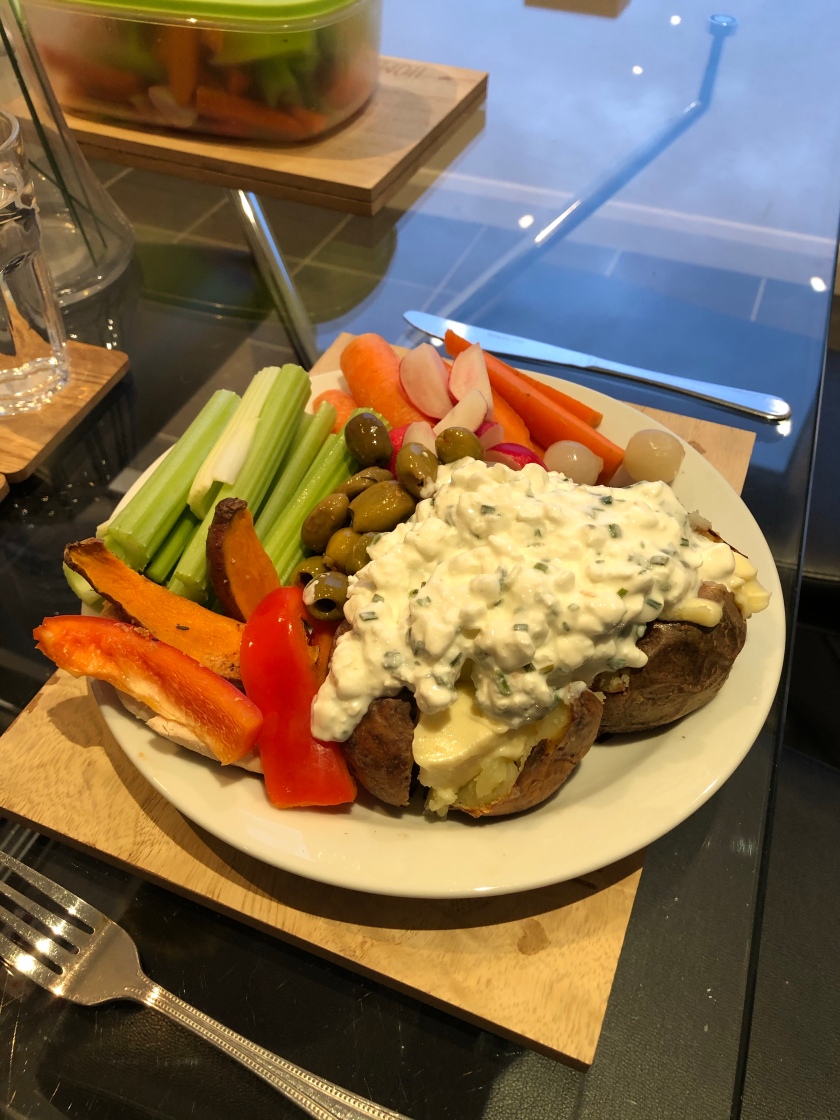 The day finished with another on plan meal thankfully and although I’ve had more syns than I should have I think that for a holiday this has been pretty darned good.

Tomorrow it’s supposed to be absolutely slashing it down – so I’m not sure whether it’s going to end up even vaguely like today.

We can only hope it’s not – but I lived here long enough to know that rain is all part and parcel of the deal.

Anyway – for now I’m going to take advantage of the moohassive bath that’s in the flat and have a loooooong soak in the tub.