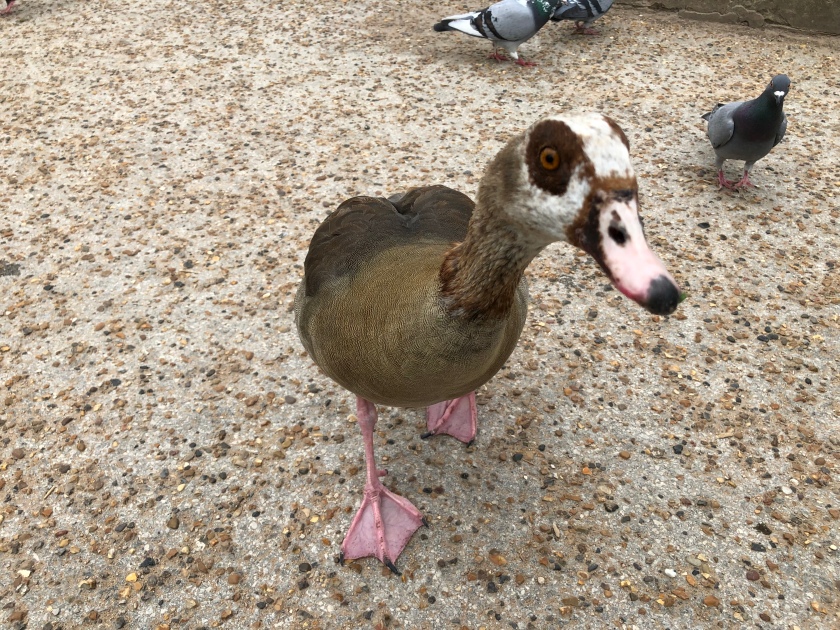 I get a lot of pleasure from lots of things that I never used to these days – but one that continues to surprise and delight me is my garden.

Long term readers may remember that back at the start of my journey in 2016 (when I still wasn’t coping with every aspect of life very well) this was viewed by me as something of a burden rather than a boon.

Right up until early 2017 I considered the maintenance of it to be a disagreeable chore rather than a chance to get out and have some exercise. 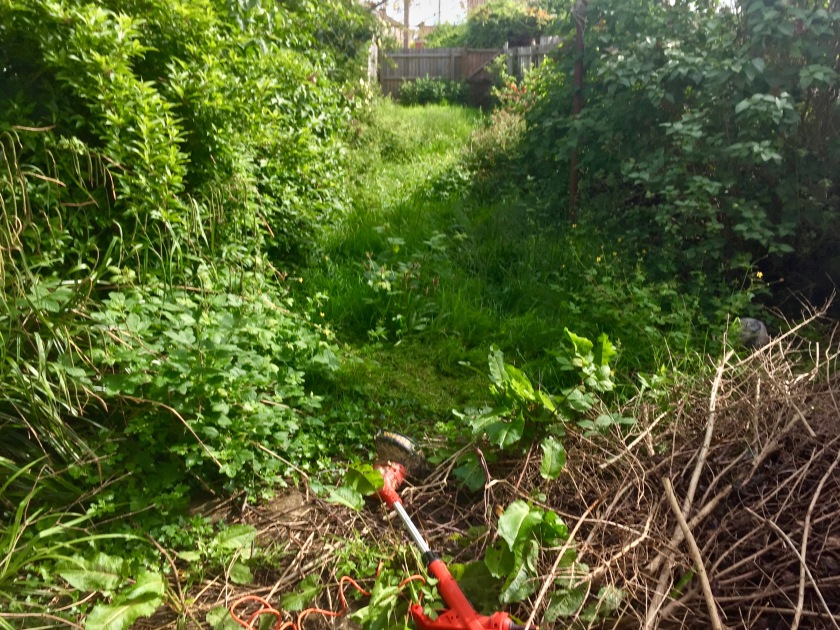 Consequently I’d let it slide into a shameful mess and I didn’t know where to begin. The problem just seemed too huge to tackle.

Although generally things were becoming easier for me as I lost weight the mental barriers were still bigger than I realised at the time and every time I pulled back the curtain of my back window (which usually remained closed – because out of sight is out of mind) I was convinced it was still beyond me. 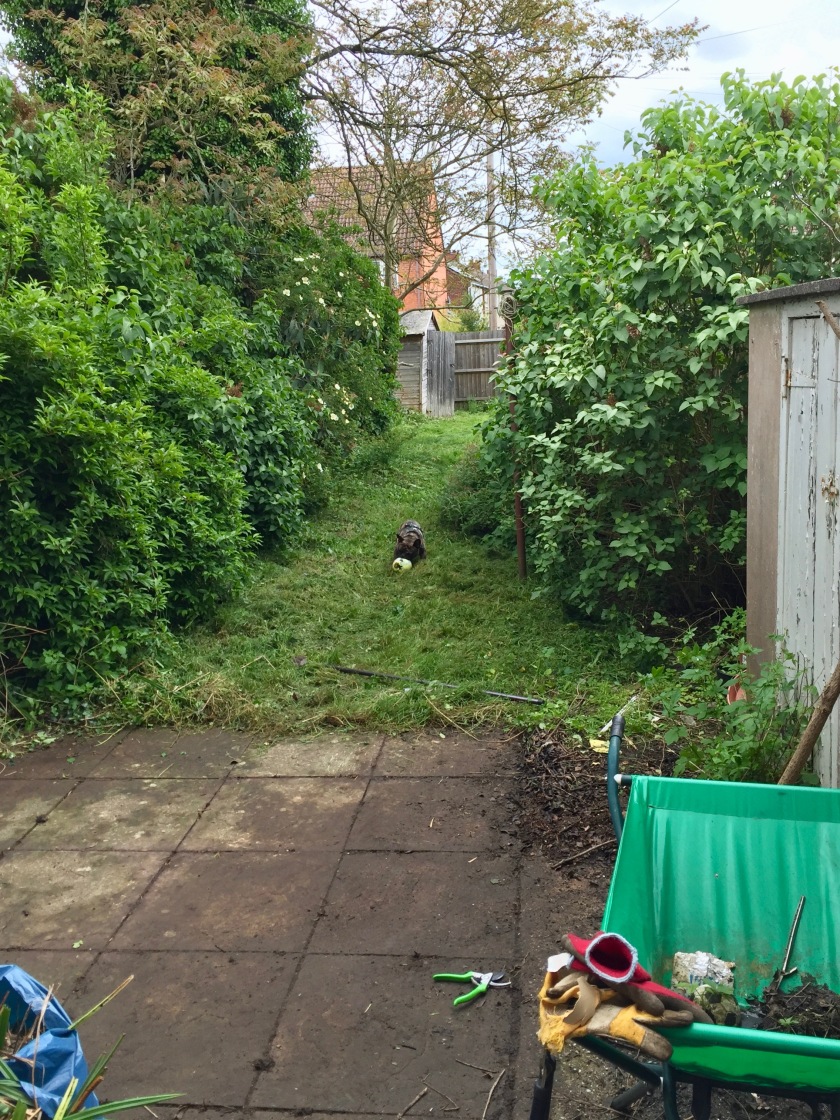 I was doing a lot of walking back then though – and as well as becoming increasingly fitter I was beginning to fit into mainstream clothes more often than not. I was still a different man compared to the one I am today – and at 20st 10lbs still had quite a distance to go before I reached my target weight. 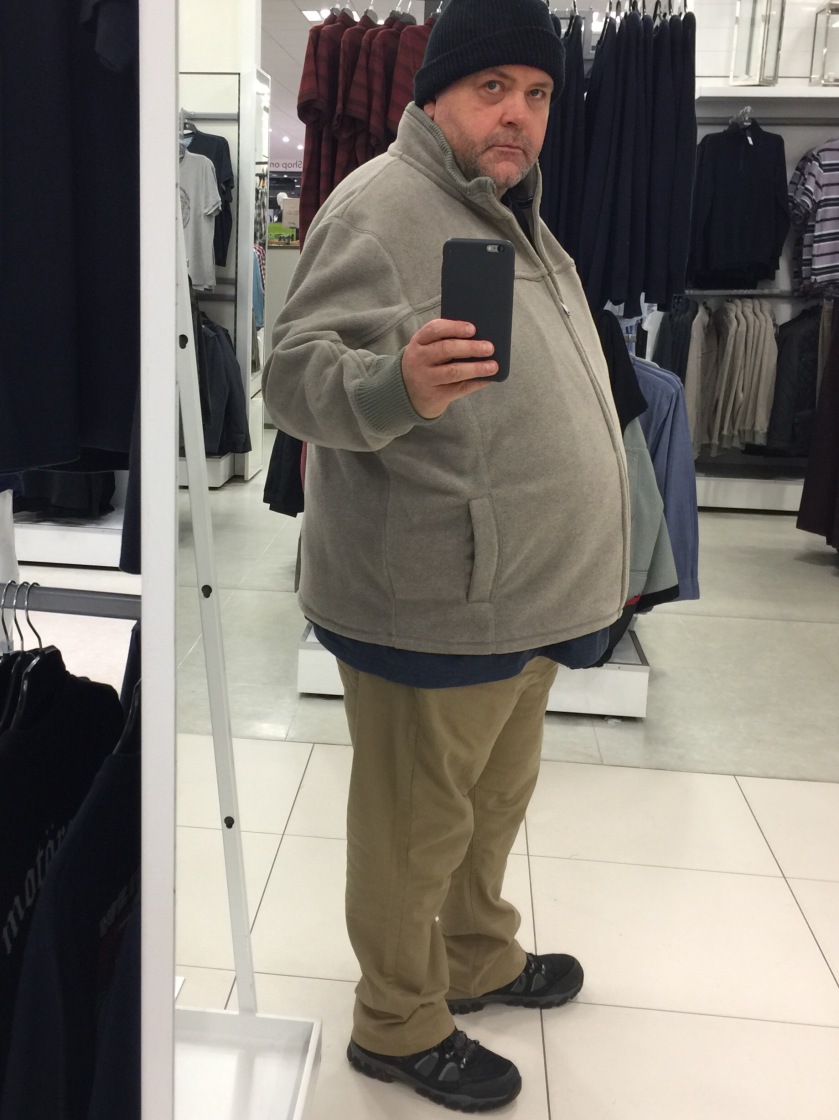 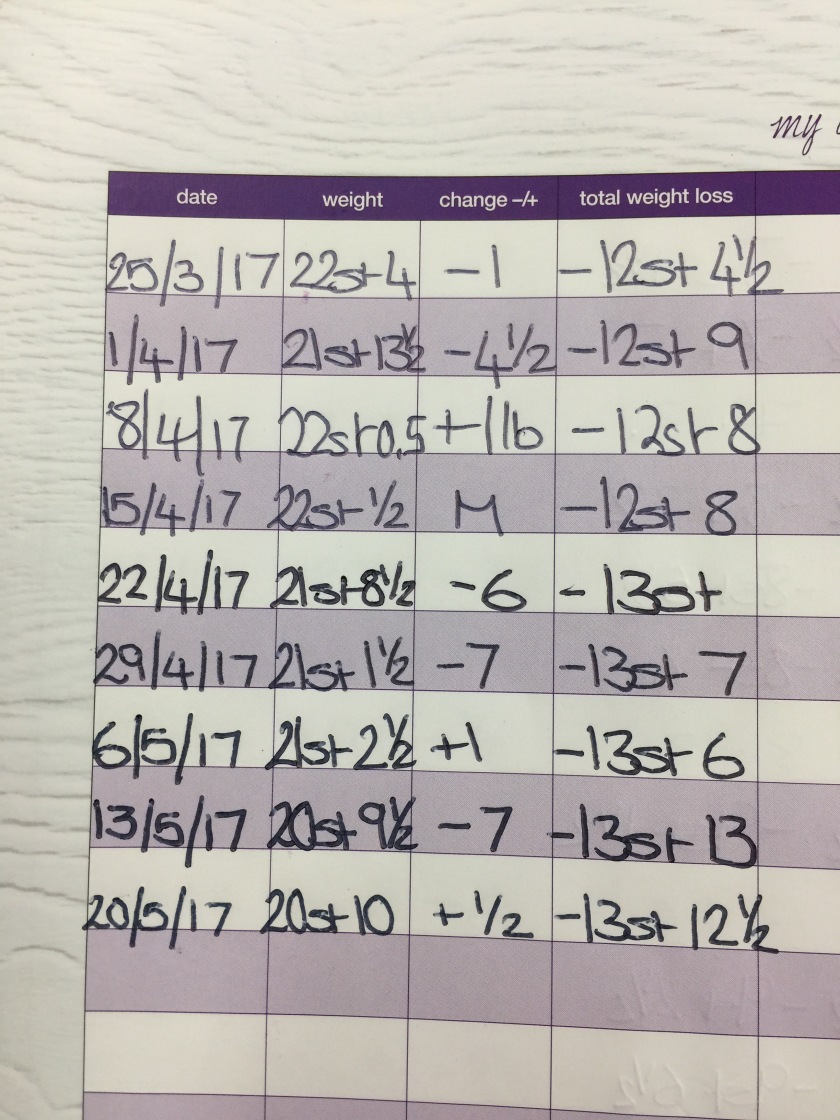 When I look back at my mindset then and compare it to the one I have now I can see that without doubt I was still being held back by an increasingly outdated perception of my capabilities. There were a lot of things that I was afraid of trying or tackling head on and certain tasks were so knotted up with fears and memories of how they used to affect me that I avoided them altogether.

This was until my friend eventually grabbed this particular bull by the horns and offered to help start me off with a couple of days clearing it (link).

I (maybe a little pensively) started with his support – fully expecting the (previously ever present) crippling back and joint pain to be immediate – and that I’d be drenched in sweat throughout. It wasn’t easy – but it also wasn’t the sweaty agony I expected – and as the days wore on the process slowly yielded pleasing results.

For one thing I could see my path and the fence again. 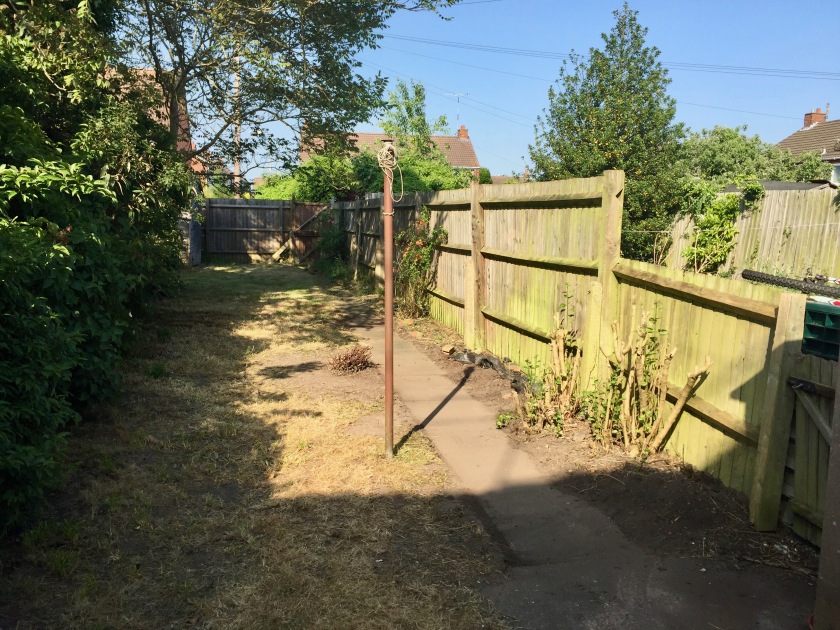 After many weeks of chopping branches up into little pieces, trundling back and forth with my wheelbarrow, filling refuse sacks and seemingly endless trips to my local tip I finally cleared it though.

My persistence had won the day but the fact remained though that my satisfaction from doing this wasn’t because I loved the process of gardening. I’d done it purely because I wanted to open my curtains and it had been bugging me for a very long time that I’d let everything slide so badly.

My approach going forward was therefore proactive and ongoing preventive maintenance. ‘Do a little a lot’ was mantra I adopted – and in doing so the garden soon became very much like washing or ironing because although I liked to see it look tidy – in truth it was just another chore around the house and very little more.

However this mindset wasn’t the whole story. 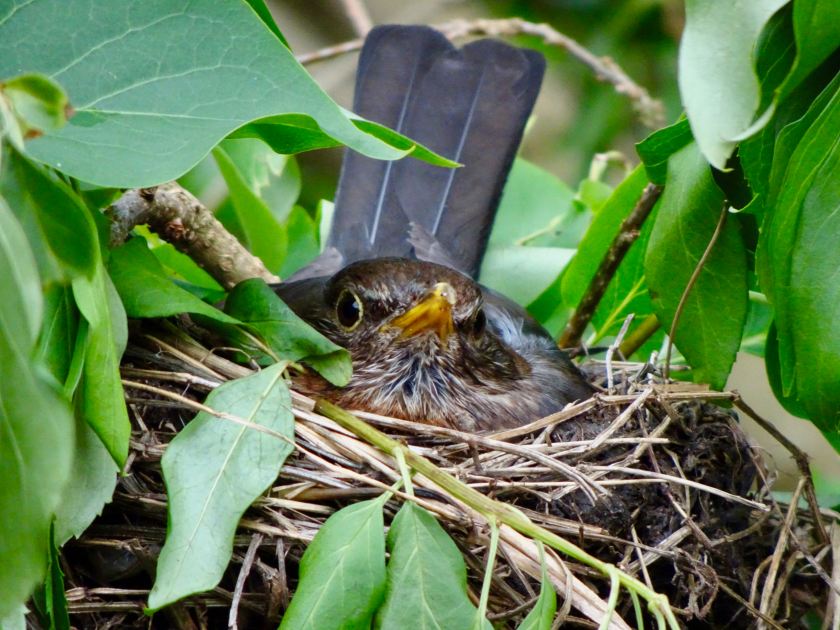 Whilst cutting the bushes back I’d been majorly upset that I’d accidentally disturbed a blackbird nest – and despite trying my best to cover it back up (link) ultimately the elements drove the little family out and their eggs were eaten (link). 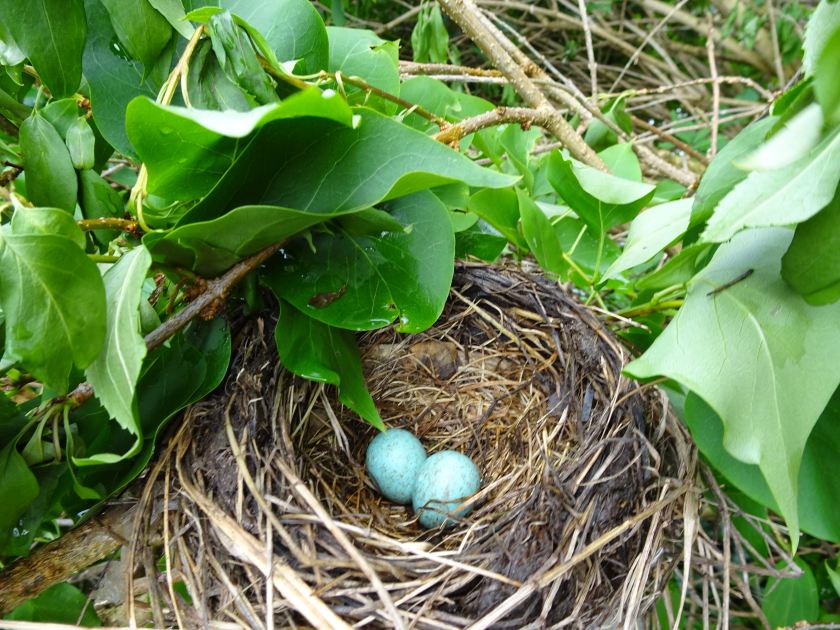 I spent a lot of time watching this struggling little family and couldn’t help but fall in love with blackbirds – which (mostly because of their inquisitive behaviour) quickly became my favourite reason for having a garden.

They monitored my activities while I was working and bit by bit became bolder – following the cycles of my digging and mowing to get the choicest morsels for their dinner.

The more bugs and worms I unearthed the happier they were. 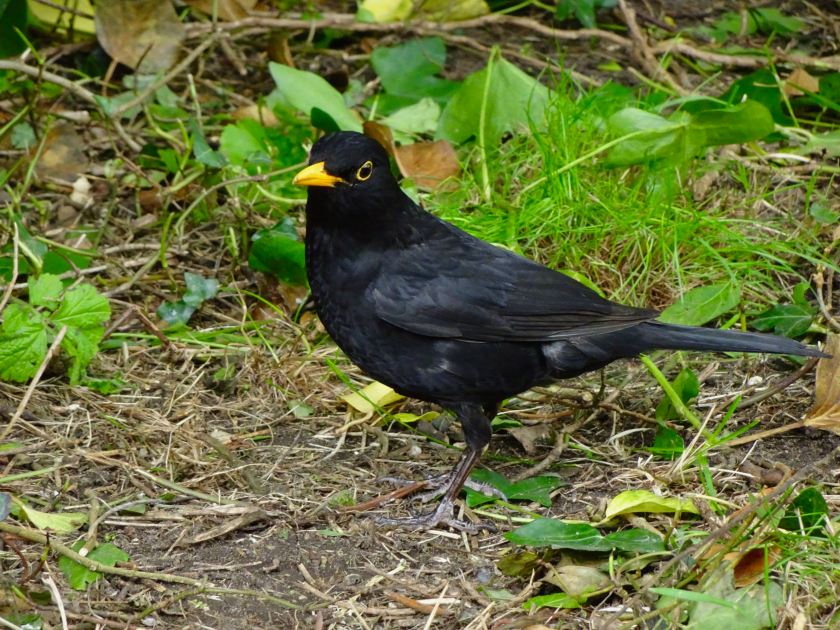 Then I started realising that if I made an effort to feed the birds in my garden and left places for them to nest (I stopped cutting back my bushes so brutally and left a thicker canopy) birds would come back and I’d always be able to listen to their pleasing twittering when I was in the kitchen.

Soon after I also started putting bird boxes and feeders in the garden which I regularly filled up with seed balls. 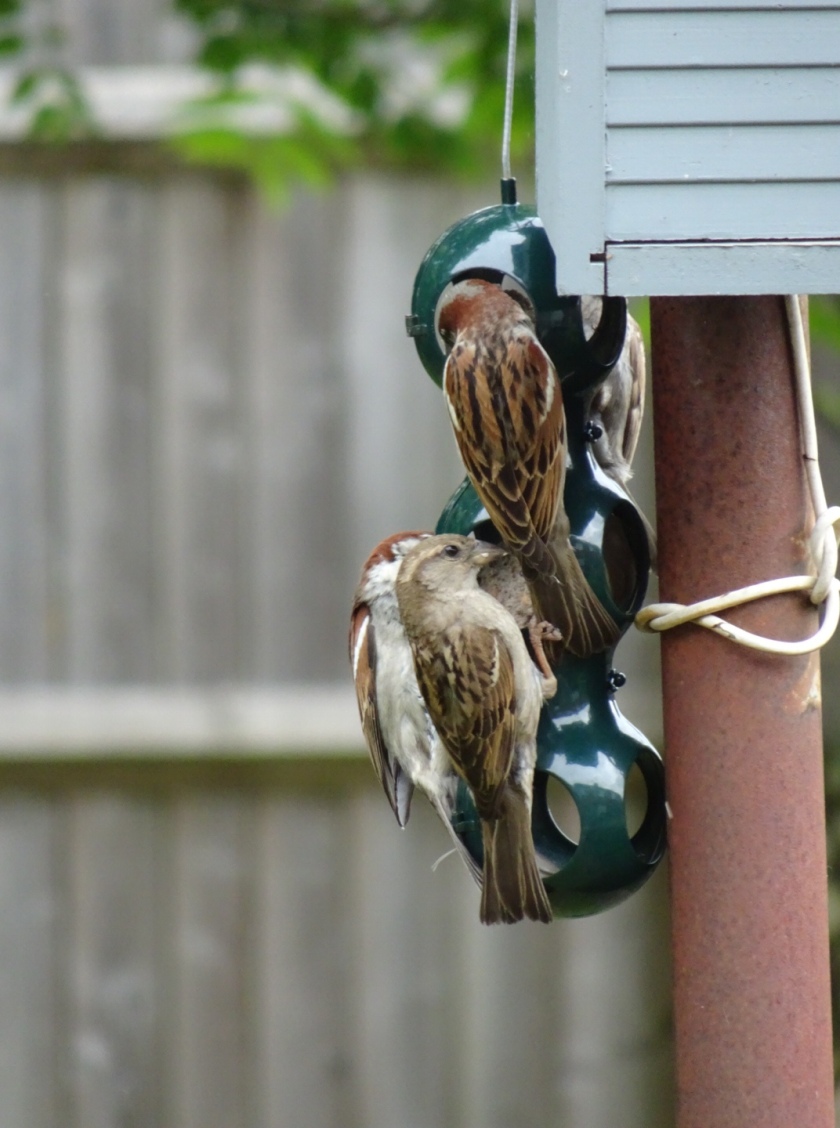 The record that I’ve seen this week is five sparrows clinging to it – all chiselling away at the tasty treats – whilst blackbirds and pigeons hoover up the crumbs below.

Over time, and just like me, the garden has taken on a new lease of life.

It’s not just the birds though because I’ve realised that there’s another dynamic at play lately. I enjoy it a lot more with company.

Now the weather has improved when I cook for my partner we tend to sit outdoors and enjoy the birdsong and leafy ambiance together.

Whilst I was weeding my patio and path the other day I realised that I’m no longer making it look nice because I have to. My incentive to maintain it has now shifted and I’ve realised that I’m doing it not as a chore but because I want to share the space with someone else.

It gives me pleasure to know that they like it too. 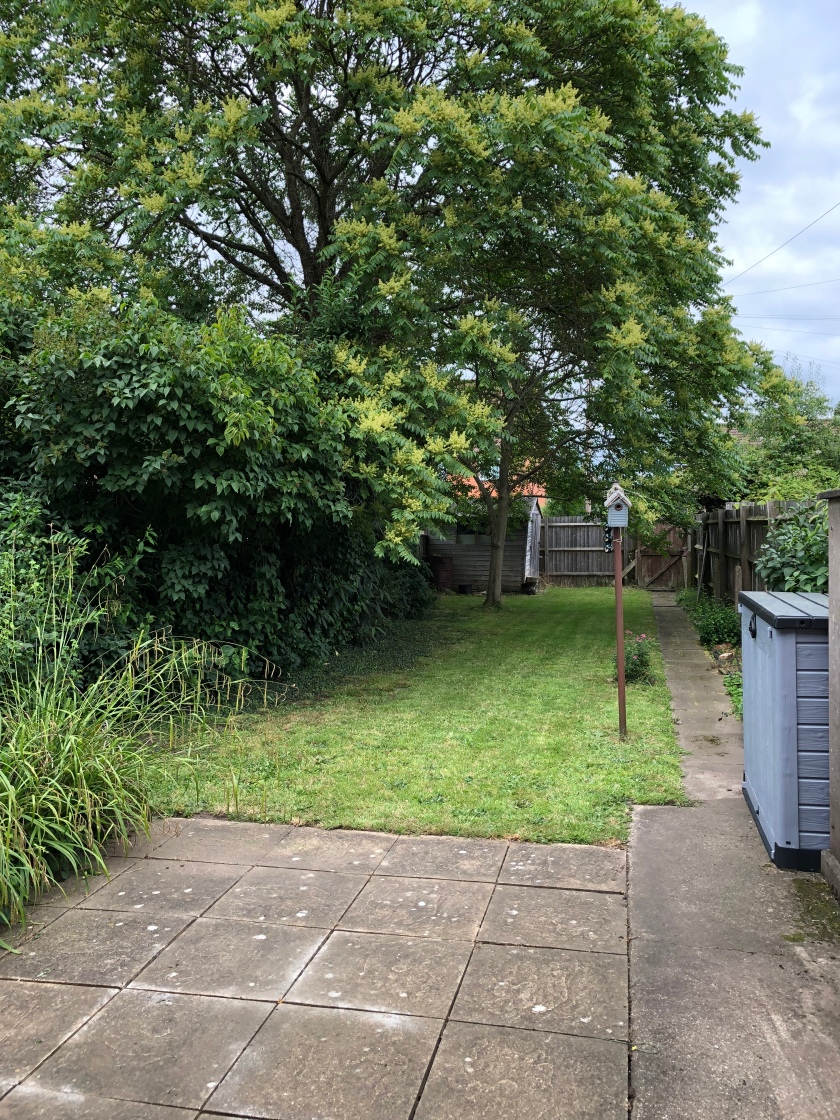 A garden is a fascinating little eco system that supports any number of little creatures and tending to it (as well as continually being out and about in the wider world) keeps me feeling connected to it in a way that I never was in the past.

On Thursday (in between my various gardening exploits) I visited Coombe Abbey for the first time in a couple of months – and it didn’t fail to disappoint. 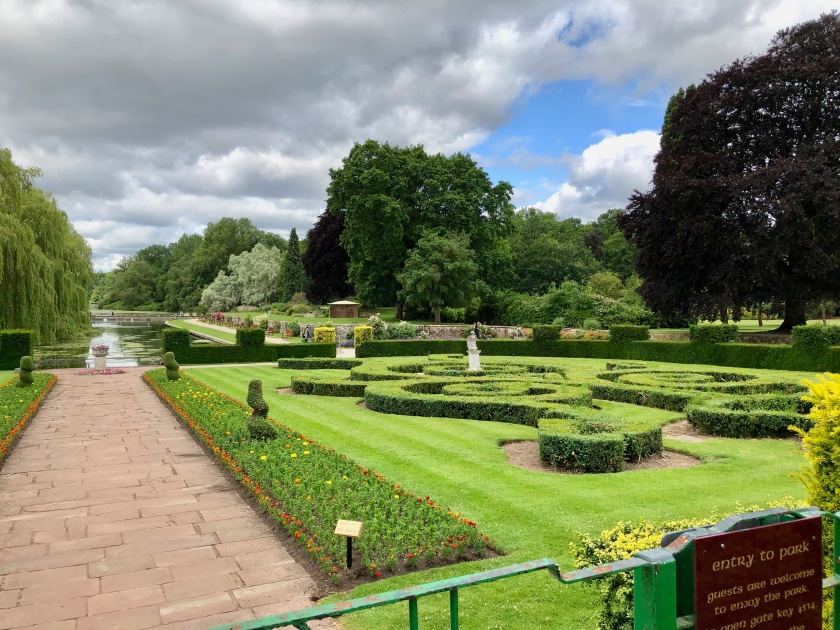 Everything is in bloom – and this applies doubly to the wildfowl.

They’re doing very well indeed this season – and the swanlings (remember those?!) are clearly thriving because there’s plentiful food for them to eat. 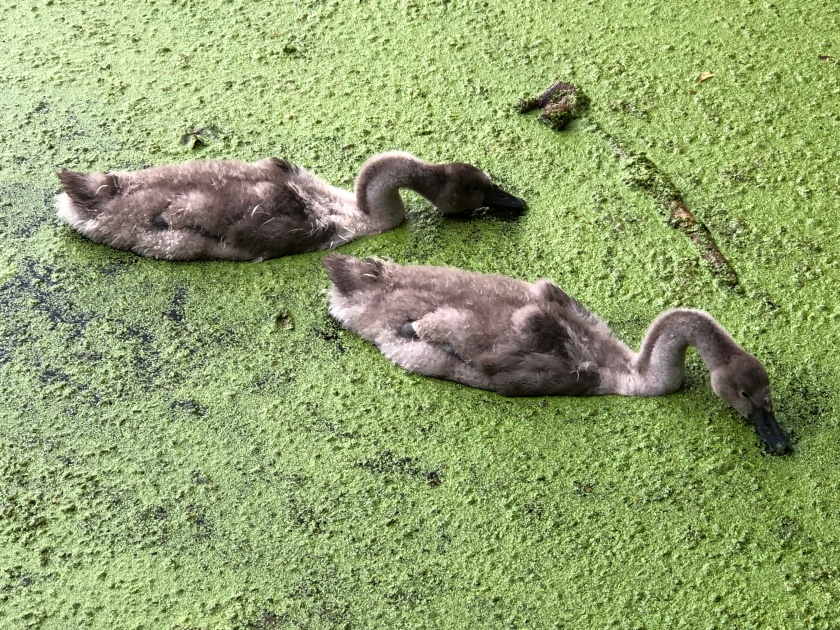 There were seven in this particular brood. All seemed to be in rude health and were nibbling away at the wonderful green algae that was absolutely covering the pond they floating around in. 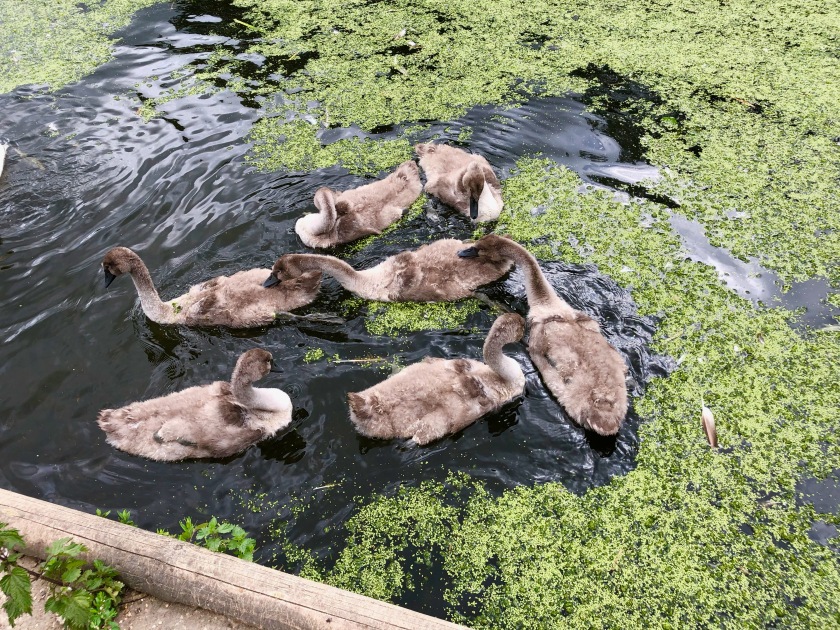 Full tummies seem to mean more chilled birds – and neither the swanlings or the ducks at Coombe seemed to mind having their picture taken. 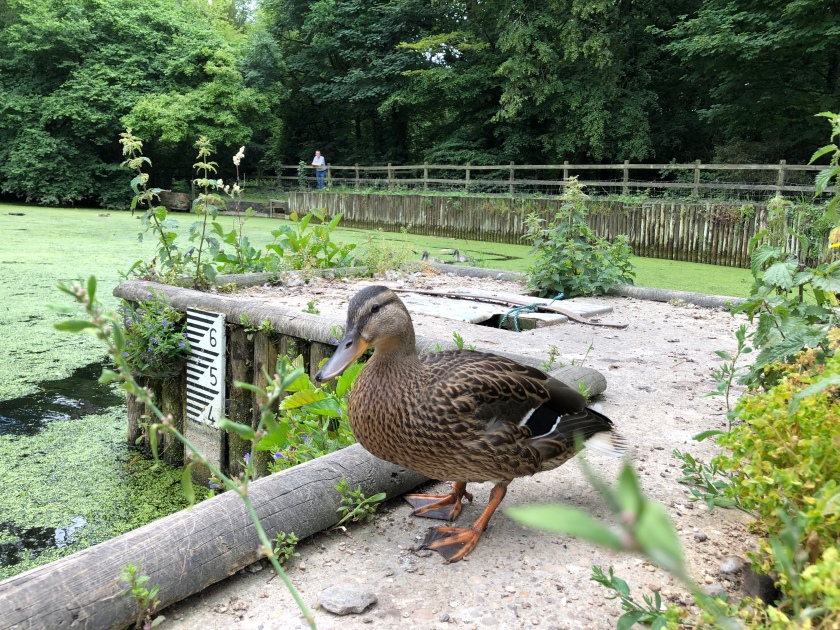 When you get closer to them the expectation is instead that you are very likely to have food – and as such a natural fear of human beings quickly evaporates and is replaced in almost all the birds by a willingness to eat seeds directly from your hand.

Coombe is hope to something else of interest though – and it wasn’t there when I last visited. 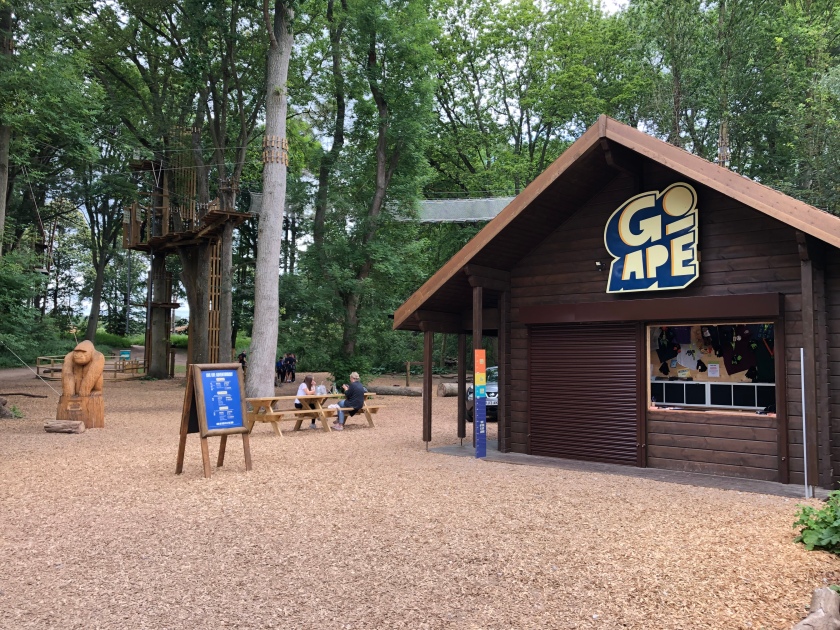 There’s now a ‘go ape’ facility there and the whole tree line in one area has been repurposed with all manner of climbing ropes, ladders and zip lines.

The prices are a little steep in my view (it’s going to be a wallet battering hour or two for a family of four) but I suppose if you want properly trained staff and good facilities then you have to pay for the privilege. 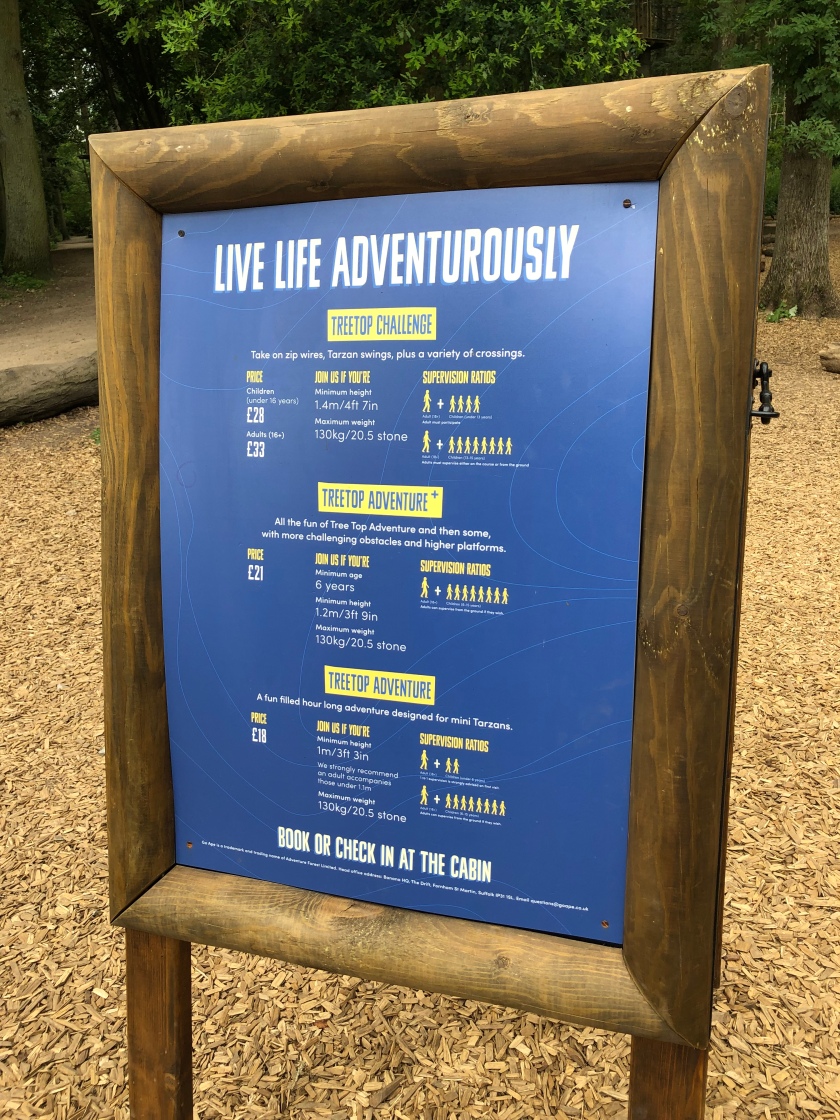 Whilst I was looking at the notice and saying I’d like to give it a go my friend pointed something out. 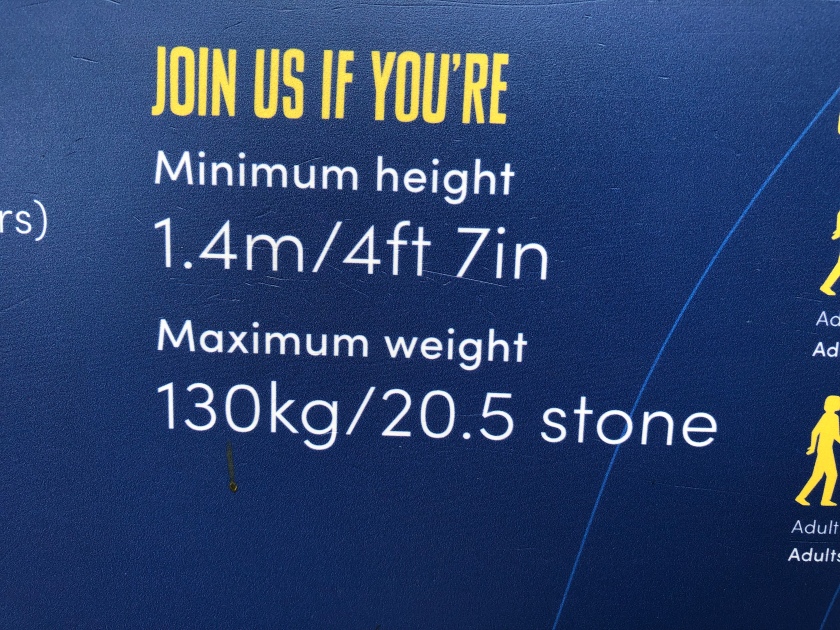 The weight I’d lost to get to target (if it was real live person) would have been too heavy to use the facilities! Furthermore if I’d been the same weight as I was when I started clearing my garden they wouldn’t even allow me to buy a ticket! 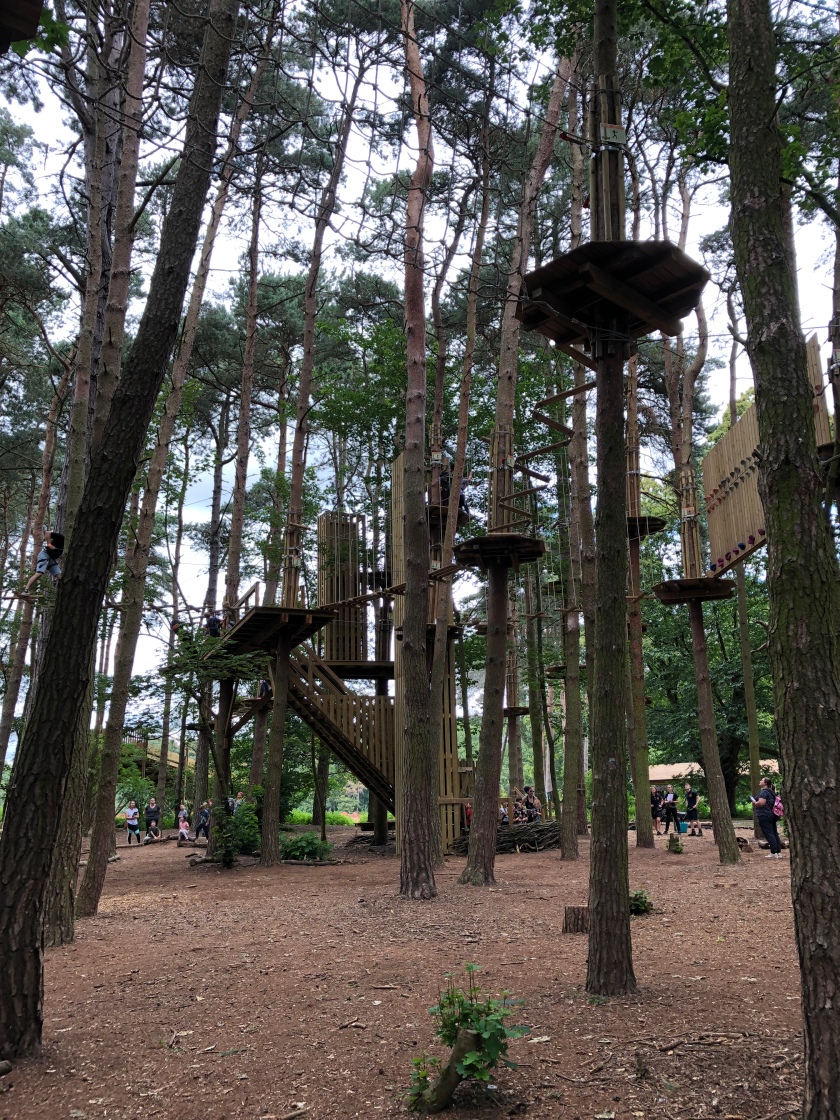 I plan to give it a go at some point though regardless of the cost because it looks like good fun. Plus over time I’ve realised that somewhere along the line I became ‘outdoorsy‘.

I must get on. I have a lot to do this weekend.

Once again I’m working towards making my partner’s move to Warwick a reality and there’s a whole load of things that need to get done before that can happen.

At least I know though that when she arrives the garden will look ticketty boo!

These photos popped through the letterbox earlier, courtesy of the kind PR people at Slimming World. Friends think I know nothing about football – and that my lack of willingness to watch even world cup matches when they’re on means that I don’t have the first clue regarding the subject.

How wrong they are!!!

I for one will never forget meeting Gary Lineker – although admittedly I thought his ears would be bigger. It just goes to show – your heroes are never what you expect! 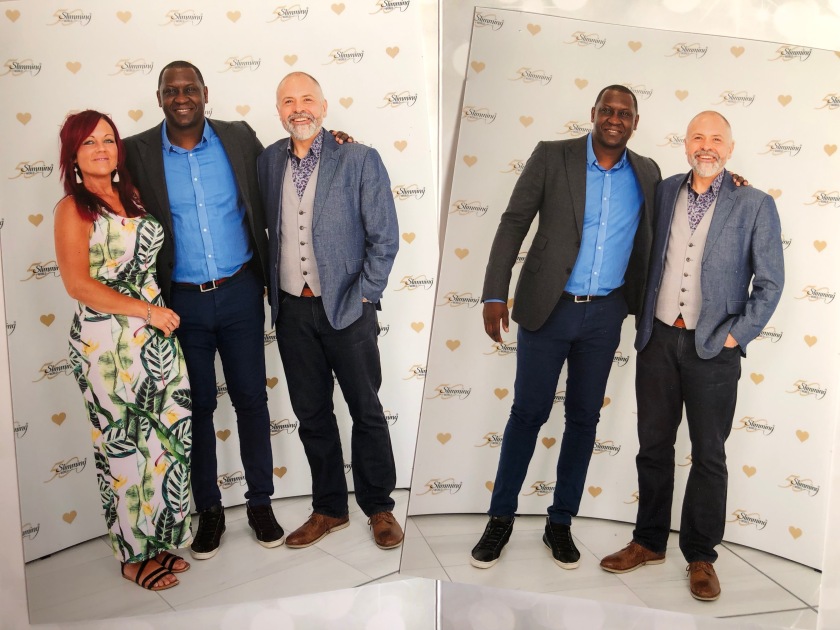