Ok – so my diamond target member badge is in the bag. I’ve managed to maintain my weight for a year.

Now I’ve reached yet another milestone though I have to consider what the next one will be.

Maybe it’s just the nature of my particular beast – or maybe it’s because I’m capricious – but now I have what I’ve always wanted I feel slightly deflated.

The problem (if you can call it that) is that when you focus all of your energy – and pour the essence of your whole being into a task until it completely dominates your day to day life – there’s often a noticeable dip in your mood when you achieve what you’ve set out to do.

When you arrive at the finish line (after the initial relief and happiness washes over you) you’re left asking ‘so what the hell comes next?’

In the past I’d have moved immediately from one health goal to another – but I have to be completely truthful and admit that Slimming World is no longer the sole focus of my attention it once was.

Whilst I’m still continually following the plan things in my overall priority list have changed significantly.

Since late 2018 my gaze has definitely shifted towards other (in my view more important) things in my private life and I now have some brightly lit beacons in the distance that have nothing to do with weight management.

In my mind’s eye they’re represented by a glow that’s emanating from a distant island in a big ocean – and I’m currently in a little boat rowing in their direction.

The sea is calm and there’s a warm sun above me in the cloudless blue sky.

However – as forgiving as the gentle waves beneath me are there’s still a lengthy distance between where I am now and where I want to end up. Furthermore when I look down I’m only holding one oar.

However instead of the boat going in circles I’m still heading toward my objective, because sitting in it to my left is someone else holding the other oar pulling in time with my strokes. The longer we sit side by side the closer they become, and the quicker the boat moves.

I know where I want to go and my companion does as well.

It turns out that we’re heading for the same island and are focused on the same beacons.

This journey and shared objective is only one part of the puzzle though, and I can’t ignore my progress with SW at any point. Whilst it isn’t my only guiding light any more I need to remain fit and healthy enough to get to my destination. When I reach it (and I will) I have to continue to build and enjoy a full life.

This requires me to maintain a solid focus on multiple areas – but I’m determined that whatever else is on my mind I will not shift my gaze away from health maintenance. In the short term therefore I have given myself an objective and have decided to dedicate March to exercise.

This is mostly because February saw a noticeable dip in my stats. They’re not bad by any stretch of the imagination – but they’re not where I wanted them to be. 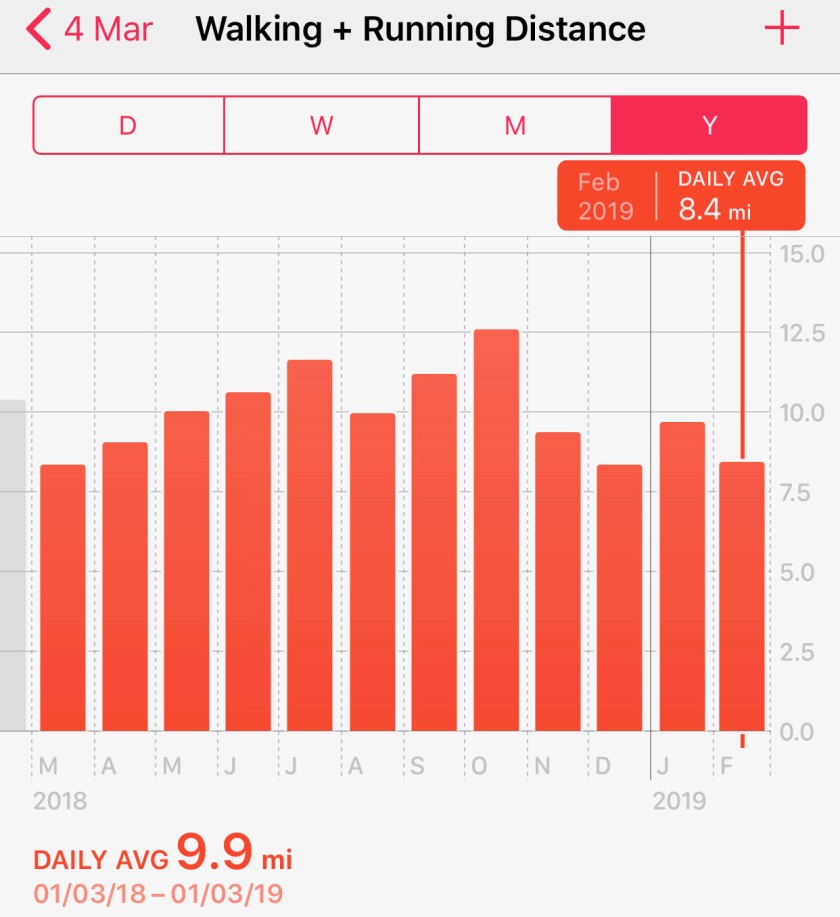 It’s worth noting two things at this point.

Firstly – the swimming stats are an average of the distances I swam in February – but are not a DAILY one as the title suggests. I’ve realised that Apple’s health app is actually giving an overall average for the days I’ve swum – rather than an average for the whole month, including days that I didn’t go swimming.

Secondly (when I interrogate my workout history) in January I can see that I went swimming on 18 out of 31 days.

So – my first objective for March is to complete at least 15 swimming workouts.

Apple Watch (maybe sensing my mood) has also set me a challenge to walk 236 miles, which is 7.61 per day. Therefore my second objective therefore is to walk an average of 8 miles a day.

My third is that I want to make three days of each week an SP day (Slimming World’s uber weight loss approach which focuses on speed and protein food groups only.) This should enable me to strike a comfortable balance between relaxation and focus – which since I started swimming has been something of a tricky thing to do.

I’m also going to up my focus on cooking super healthy and filling meals – because February had way too many days where I went overboard eating free foods (as well as some marathon hi-fi bar munching sessions that are best not discussed) and then had to pull everything back into line afterwards.

My slow cooker is one of many great ways to achieve this aim with as little friction as possible.

The above insanely filling and warming dinner was made with 500g of diced lean beef, a can of chopped tomatoes, a Tesco butternut squash and red onion stew pack, a carrot and swede stew pack, two leeks, 4 cloves of garlic, a stock cube, salt, a few bay leaves, some couscous and a can of (drained) baked beans.

If you decide to make it yourself  my advice is that you put the last two ingredients in at the end rather than the beginning – because otherwise the couscous sticks to the bowl and the beans just turn to paste.

If you don’t feel full up after a couple of bowls of that then I suggest you have some (speed) fruit and fat free natural yogurt with a bit of stevia and some cinnamon for dessert.

If you haven’t had your healthy extra then bung in 40g of rolled oats too (my trusty fry light cap measures out just about the right amount – which is 7 syns if not a HE).

It’s worth noting that this picture has Sainsburys Basics low fat natural yogurt in it – which is synned on Slimming World’s plan at 0.5 per 100g whereas fat free is lower in calories and ‘free’.

As you can see from the nutritional info (low fat on the left and fat free on the right) there’s a difference of around 100kcal for a 500g pot. 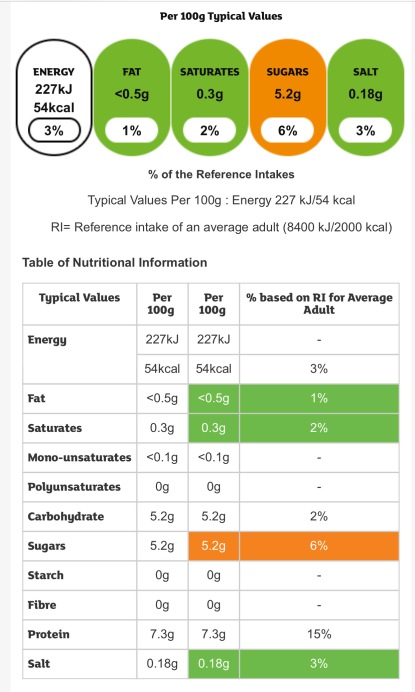 Personally I can’t tell the difference in taste but others I know prefer the slightly more decadent alternative!

I need to get walking.

I’ve got two swims under my belt for March so far (one of which was 50 lengths early this morning) and I need to get another five miles of pavement pounding tacked onto my stats before I can even think about making myself a super sized salad later on this afternoon.

Here’s to new goals and re-focusing on objectives internet!