Friday night is always a tough sell for me when it comes to sleeping.

It’s usually related to weighing in on a Saturday morning but at the moment (as I sit awake in the dark early in the morning) I don’t have that excuse because I’m not standing on the scales tomorrow.

I’m planning to be elsewhere – busy enjoying my life.

I am however preoccupied (and have been for a couple of weeks now) with the upcoming anniversary of me reaching my target weight – which means that (if I’m still in range) when I next stand on the scales I’ll be a diamond target member.

I’ll be honest and say that in many respects remaining in this bracket (although I’ve lowered my target twice since then – making it a stone lighter at 13st 7lbs) has been in some respects harder than I first expected.

It’s not because the Slimming World plan has ceased to work for me – but because of the continued game of mental hopscotch that target members have to play in order to keep themselves out of the ‘now I can just relax’ mentality.

Sometimes I manage it and sometimes I don’t – and in truth there have been times where I’ve been easily half a stone (maybe a little more) out of range over the last 12 months.

It’s been a tough thing to deal with at times – especially because on top of the pressure that I already heap upon myself to be practically perfect when it comes to my weight I also have the added pressure of being the Slimming World’s MOTY.

Whilst precisely no-one has told me I need to do anything other than just be me (warts and all) the sense that I have a duty to be a role model to others is something that’s always present.

It’s something I’ve taken very seriously over the last seven months since I won because over time I’ve seen what my success has prompted in totally random people.

I’ve watched with amazement as they have used (and cited me) me as a source of inspiration and motivation and it’s honestly humbling.

For someone who felt like a failure for over 40 years to suddenly be viewed as a source of inspiration is a pivot that’s both mind boggling and still occasionally an extremely uncomfortable place to be.

At times it’s a heavy burden to bear because I really don’t want to make the right food choices each and every day.

On many days I do not.

Just like the rest of the world I can still be an emotional eater and I occasionally hugely over indulge with free food and consume massive portions at meal times.

Whenever I can however I mitigate this tendency with food optimising and make sure that I eat extremely large amounts of what SW refer to as speed or free foods.

My ‘syns’ are usually ‘savvy’ ones and are cooked into the foods that I eat. Consequently I tend to stay on track in maybe the same way others do when the consume smaller portions of more processed foods.

Typically I never eat junk food. Just lots and lots of freshly prepared meals or lots of fruit and veg.

If I’m out and about I don’t go nuts or slip into holiday mode – I try to be sensible.

When I can’t then I look at whatever transgressions I’ve made as flexible syn days, forgive myself and just move right along with a brand new tomorrow.

As much as you might expect me to continually babble on about food optimising and Slimming World’s plan however that’s not the whole story.

Since I started to appear more and more in social media I’ve tried very carefully to minimise how many pictures I post of the food I eat because my weight maintenance is about so much more than just what I put in my mouth.

Instead my image is one that’s about being outside.

Sure – I couldn’t have gotten to where I am without making the right choices when it comes to food but my life has been lived outdoors for the vast majority of the last three years – and it’s that element of my life that I feel is most fundamental to my continued success.

Whilst food intake is undeniably a massive part of my story I’ve also seen major health improvements (such as my diabetes reversal) that I am completely convinced would not have happened without my continued emphasis on exercise.

Furthermore I’ll go as far to say that without my willingness to go out EVERY SINGLE DAY and fill up my Apple Watch rings I’d not be where I am now.

Whether you refer to it as body magic or (if you too have the device I do) ‘filling your rings’ this is the key (in my view) not just to enable transformative change in the first place – but to ensure that once it’s taken place the benefits have permanence.

The truth is that whilst I may eat more than most I also do more than the average slimmer – and it’s not unusual for me to finish some days with around 5000 kcals expended.

A while back (just after winning MOTY) I read a mildly critical comment about my ‘obsessive’ walking (around 10 miles a day roughly) under an article regarding my MOTY success story in the Daily Mail.

It questioned why I bothered to do such a ridiculous amount of miles when the simple answer was that I should just eat less – because if I did then I’d need to do less.

For some time this bothered me – because I’ve continually felt guilt about my portion sizes being the ‘last bastion’ of problem eating in my life.

They’ve never really changed since I started my transformation – and instead of modifying quantity most of the time I’ve modified the content of a meal in order to compensate for my worst impulses.

I have wondered in the past whether my walking has been all about enabling such bad behaviour (if you can call it that) or whether I do it for another reason.

As time has gone on though and I’ve added swimming to my regular routine I’ve realised that my continued appetite is not just about greed – it’s because I need to replenish the stores of energy that I burn – and that I eat more to move more.

This is the point of my social media presence on Instagram – which doesn’t contain endless pictures of every meal I consume – but instead contains images of a life that is being lived to its fullest extent.

I spend my time seeing all that the world around me has to offer, sharing that with others who are close to me and drinking deeply from the twin cups of nature and the human spirit.

I’m happier not just because I’m thinner (that just makes me like everyone else) but because I spend my spare time outdoors – and as much of it as I can with the people I love doing activities ensuring we will have long lasting friendships that enrich us all.

It’s because of this that I’m where I am in life.

Healthy eating alone is not the answer.

In order to have a sustainable and healthier future I need to continually chase the sunset.

That means swimming just a little more, walking a tiny bit further or just trying every day to be a better version of myself. 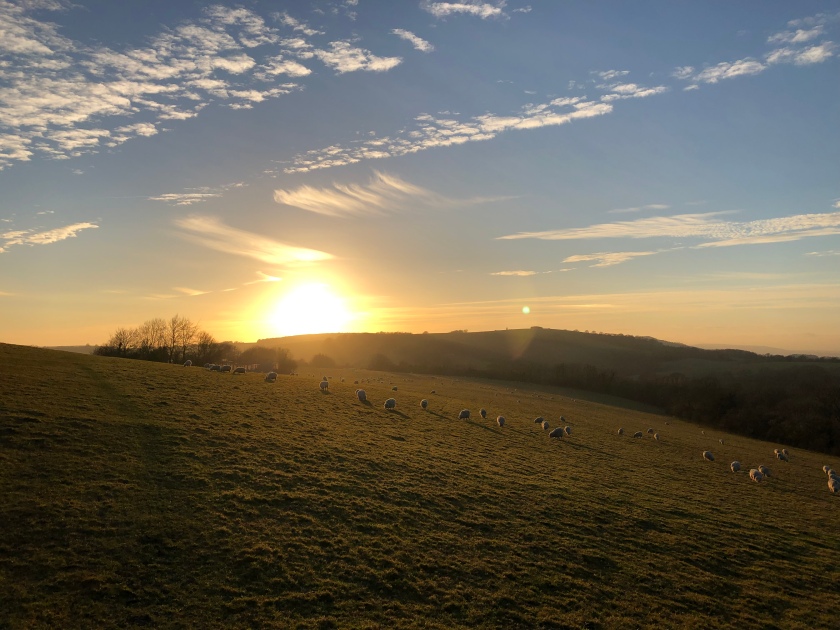 If I do then anniversaries like my diamond target membership or annual milestones regarding alcohol abstinence will eventually just come and go without any fanfare.

They are already my every day normal – and because of that I know that I will not only hold that award in my hand very soon but that I will carry on being the same man that got there in the first place.