Even at the best of times it can be really hard to remain focused on one’s goals (regardless of how important they are) and in this case mine is to remain in target for the whole of February.

I weighed in earlier than usual (or later, depending on how you look at it) on Monday and managed to maintain my weight – coming in at exactly 13st 7lbs.

Honestly I went a bit off plan after that (don’t we all after weighing in?) and ever since I’ve been trying to slot myself back into ‘the zone‘.

When it comes to maintaining weight this is a difficult place to be because mentally you’re ‘already there’.

Often you feel like you’ve ‘done it’ – and all too easily this can translate into relaxing way too much.

In my case I did a bit – and it’s meant that I’ve eaten more than I normally would, walked a bit less, and occasionally stayed in bed listening to the wind and rain outside when I really should have gotten up and walked to the leisure centre for a swim.

It’s not been a completely ‘shut in’ week mind you. I’ve still been exercising.

For instance the other day I spent quite a while walking to, around and from Coombe Abbey.

It seems to also have intriguing little micro climates too – because whilst the duck pond was completely frozen over just metres away in the woods spring appeared to be in full effect! 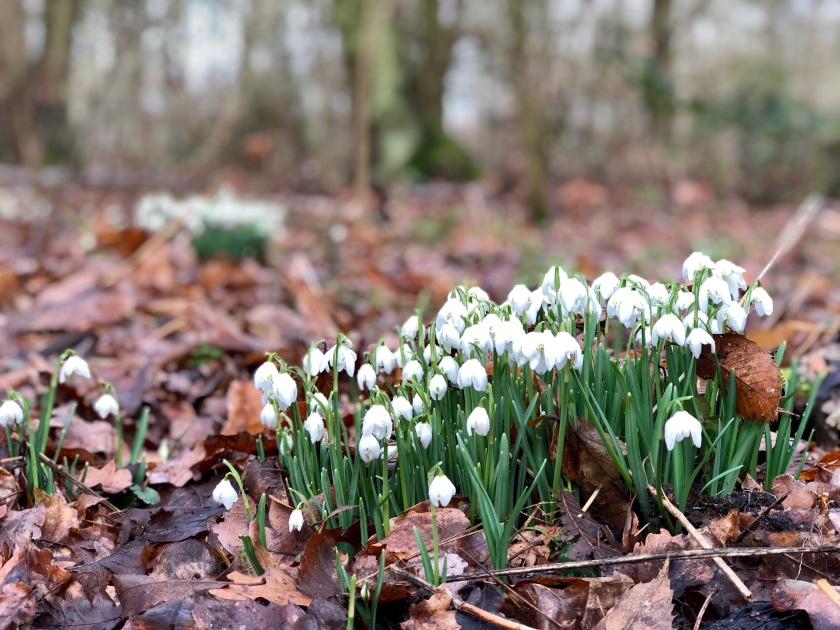 I adore these little flashes of new life poking through the undergrowth – and it’s not just aesthetics that they’re good for.

I need to get outside in order to maintain a positive mindset – and regardless of how grey the skies are when I do (and see things like this) I’m always reminded that there’s something lovely to be found nearby.

It makes me feel connected to the world – and that I’m also alive and continually growing.

On other brighter days this week (when I’ve been out of bed early enough to see the sun come up) I’ve also been treated to some absolutely fabulous skies. 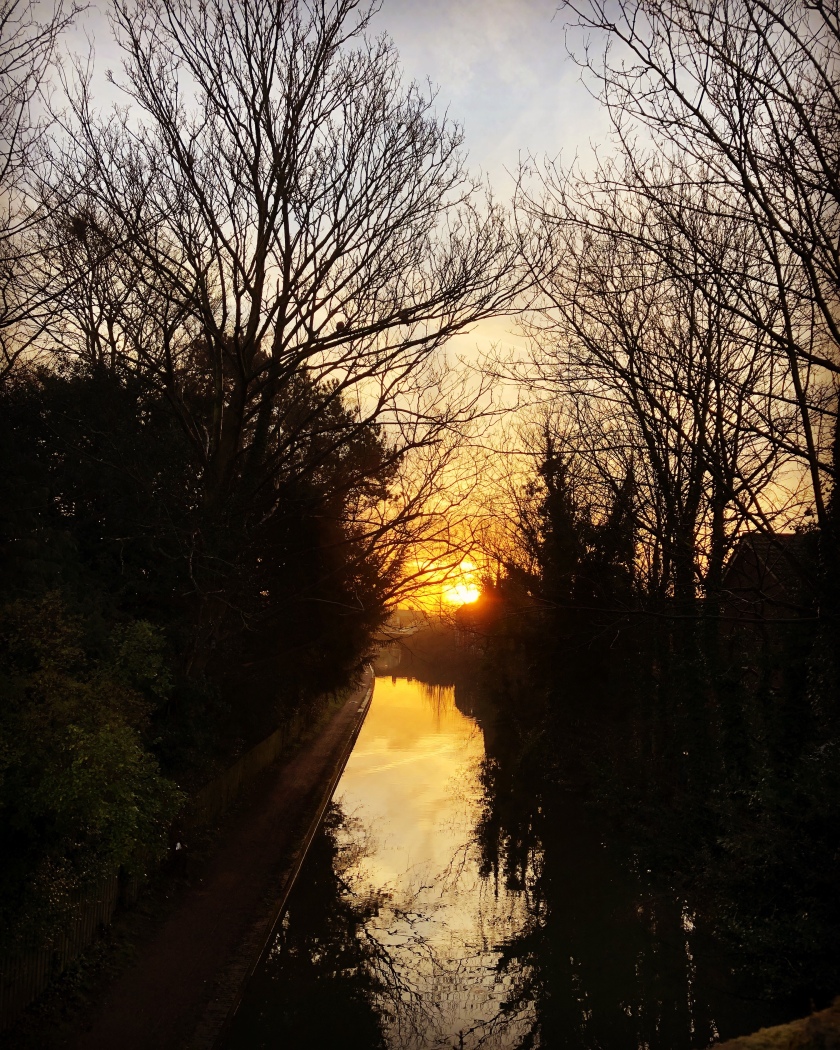 Being outside never fails to give me a sense of well-being and positivity.

There are other reasons to feel good too.

At the very least if I get up, go for a walk and have a swim then these activities offset at least some of my bad behaviour, and if I’m in a grump about over eating this causes my mood to lift.

However I have to be careful about thinking that exercise fixes everything because this is a potentially self defeating mindset to get into.

Ultimately no amount of it (at least in my experience) will make up for continually not sticking to plan.

Ultimately you’ll get sick of swimming back and forth or walking ever larger distances way before you ever get bored of eating nice food.

So this morning represents something of a line in the sand.

I really don’t like ‘drawing lines’ – because if I’m honest (for no good reason) the phrase irritates me intensely.

However today it seems appropriate. If I don’t rein in my overeating then when the end of the month rolls around I’ll be scuppered.

I decided therefore to make a stand against my own bad behaviour, get up early and go for it at the swimming pool.

Despite almost stopping and calling it a day after 60 lengths (I felt really tired!) today I pushed on and finally managed to do 100 continuous lengths at St Nicholas.

Thats 2.5km and it accounts for nearly 2000kcal burned before 9am!

I’m not chasing any records though.

I’ve stopped trying to beat previous times because I’ve pretty much plateau’d in that respect – and without significantly improving my technique (I still don’t put my head under water during the breaststroke) I doubt anything will change.

At least for the moment I’m happy to remain very much an amateur swimmer. It hasn’t hindered my ability to exercise one little bit and my average speed is still quite respectable.

There are several people doing front crawl in the ‘fast’ lane that I’m regularly keeping pace with – and so far I’ve noticed no-one at all swimming for as long or as continuously as I tend to do.

At the moment I have immense pride that when I swim in the morning I’m usually in the pool well before the usual regulars and get out well after them.

Furthermore, unlike many of them I don’t stop at all now.

The entirety of my time in the water is spent swimming, rather than pausing and nattering or taking a breather.

Whilst many people I see each day swim much faster than me almost none swim so continuously.

For those who haven’t been following my blog for a long time I only recently started swimming again (November the 16th – link) and the very first time I tried my arms simply weren’t up to the job.

I had to pause at each end of the pool for a minute or so to let the aching subside before going again.

It’s amazing how quickly this improved however – and within a couple of weeks things were quite different.

Not only am I chuffed to bits with my overall fitness and stamina gains but I’ve been really pleased with the visual and physical improvements over the last three months in my arms, chest, shoulders and back.

At times though it’s mildly disheartening – because whilst from a muscular perspective I am stronger than I’ve ever been, from a skin perspective I still have way more than I need.

However – when I embarked upon this path in life I never set out to look like a catalogue model.

I’ve always known that this will never be my reality.

My body has a history. For better or for worse I have to live with it and accept it, because there will never come a day when I decide to cut bits off for vanity.

The truth is I have learned to love some parts of myself and simply accept the bits that I currently can’t.

Then unexpectedly proof positive arrived not so long ago to remind me that this kind of thing really doesn’t matter in the grand scheme of things.

My new partner in crime has proved to me that I can still be loved regardless of my imperfections.

When someone you adore can look at you and not notice (or care about) all of the faults that you think are so huge it’s a timely reminder that there’s only one real competitor in any race.

Only you stand between where you begin and the finish line.

Your faults, failures, flaws and shortcomings are never as big as you think they are – and even if some of these seem larger than life it really only ever comes down to your personal opinion.

If self belief and self perception are aligned then you can accomplish amazing things – and it never hurts for me to remind yourself of this.

I continue to do this with comparison shots.

Whilst I still have an uneasy relationship with pictures of myself from the past and present nothing makes me prouder than contrasting a practically immobile man that I no longer recognise in an 8XL shirt and 66in waist trousers with a guy wearing a medium jacket and 34in jeans. 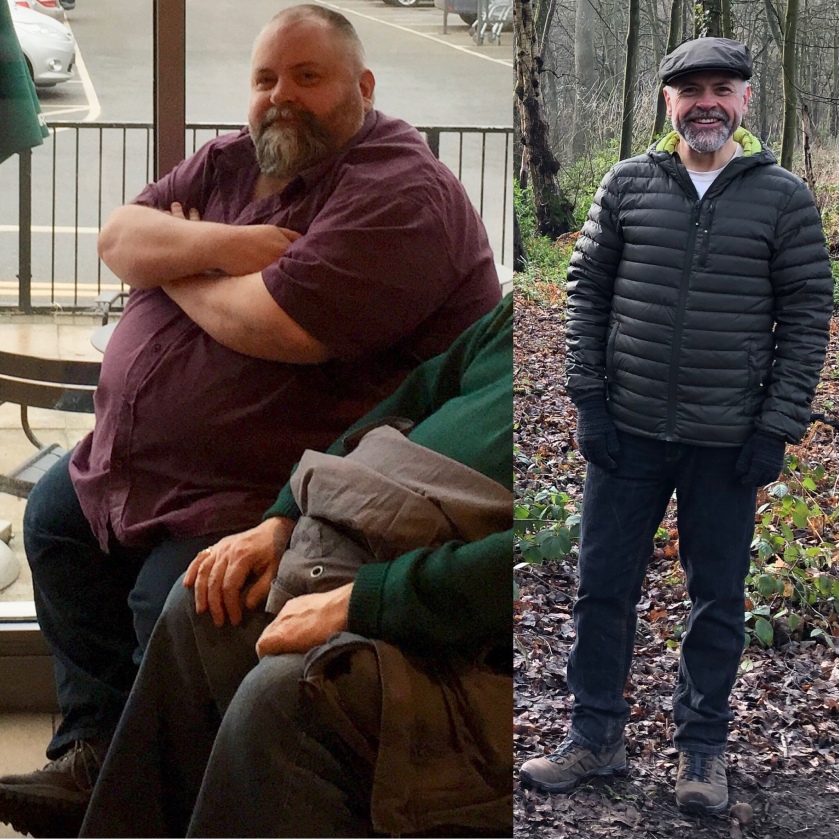 It’s also worthwhile remembering when I look at these that I’ve effectively lost more than an entire overweight father (sitting to the right of me) who told me when I started in April 2016 that I had to lose more than his (at the time) 19st frame to get to where I needed to be.

It’s also something of a personal triumph to know that his confessed irritation with seeing me drop from almost 35st to below his weight proved to be a catalyst for him to take action.

Consequently he lost pretty much all of his excess too – and my father (who is not far away from his 80th annual increment) now weighs in at a lower weight than I do – having lost somewhere between 6-7 stone.

So – the (endless) battle continues.

For all of us.

Just like my dad I’m still working towards my goals, still trying to get better, and still challenging myself to do new things.

Hopefully by the end of February internet this attitude will pay dividends and I’ll get my diamond target member badge.

You’ll have to come back and see if I do closer to the time!