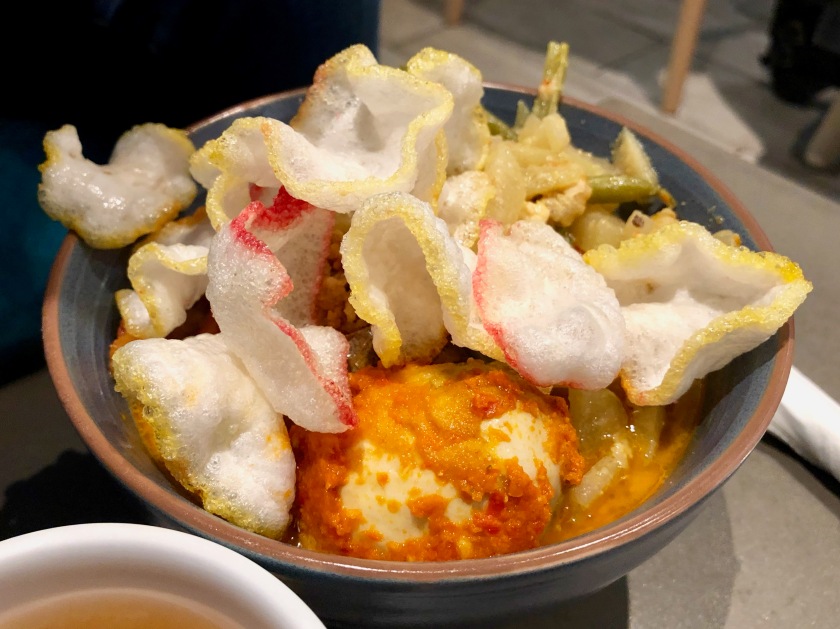 There’s something about the tastes and sounds of a place (which you call home when you’re away from it) that can immediately pull you right back and remind you of all the things you’ve missed from there or that have come to form a part of who you are.

I’ve been thinking a lot lately about my history and wondering how best to explain ‘who is Dave’ to anyone that doesn’t yet know me.

Most of me is in the pages of this blog – but suggesting someone read it for this purpose (particularly when there’s nearly 700 posts of ‘me’ contained within this site) is not the same as personally leading someone through the highlights of events and decisions that led you to where you are now.

When you have a lot of well established friends who know you really well it can often have the unexpected side effect of making you feel rather lacking when it comes to explaining why you are who you are and where you come from.

Existing mates already know but explaining it all to someone new is complex – and it’s an entirely new skill to perfect.

In many ways this comes naturally. I am after all something of a chatterbox – but in other ways I find this quite hard to do – because there’s a lot about the new me that still doesn’t fully make sense or hasn’t ‘settled’.

In many ways I’m still discovering a new ‘self’ – although I’ve come to the conclusion recently that I’m not unique or special in this respect.

Everyone else is constantly learning who they are too. Just when we think we have a handle on who we are, life has a way of rocking your particular boat and making you rethink how you stay afloat.

So far I’ve found that explaining myself is actually (at least to begin with) a fairly generic box ticking exercise. For me at least it seems to keep returning to stringing songs or films together and then talking about the sense of place and memories that they bring back.

What was your favourite album – and where or who does it remind you of?

What movies do you love and where did you see them? Who were you with?

How did all this make you feel?

It seems that I’m more musical than I previously thought – or maybe I’ve just leaned into it as an interest to allow me to give things a sense of time or place. It’s amazing how these little tunes or iconic moments of celluloid become part of us and shape the story of ‘who we are’.

With them we write a conveniently packaged narrative of someone that’s ‘into electronic music’ or ‘a geeky sci-fi nerd’ (guilty on both charges) and our early choices in these areas form the basis of how we typically explain who we are to others.

Hopefully if we sling these classifications and likes out towards other people in the guise of interests they will resonate with them and we’ll uncover common ground. If they do relate to us then hopefully we will find a bond of shared experiences and eventually belonging to accompany it.

Sometimes though it’s not about getting to know someone new and connecting.

Sometimes sharing a memory is about reconnecting.

For my sister in law part of the story that explains her is Lontong Sayur.

I’d never heard of this before – but this warming Indonesian breakfast dish is apparently a big thing where she was born – and since it takes a long while to prepare it’s a food that tends to only get eaten on special occasions.

For one day only only a small artisan Indonesian coffee shop in the centre of Birmingham was serving it, and the number of available portions would be limited to thirty or so.

I’d been invited along by my brother to have a bite to eat and also indulge in the speciality coffee that they proudly roast themselves in the shop.

However – we’d need to get there early.

I didn’t mind. I’m usually up at the crack of dawn anyway.

I was on the way to the train station shortly after 8am, and before long at 9.30am I was standing outside of my destination – which was called Ngopi (link). This can be found half way down Dale End just opposite the NCP car park by Ikea in Birmingham city centre. 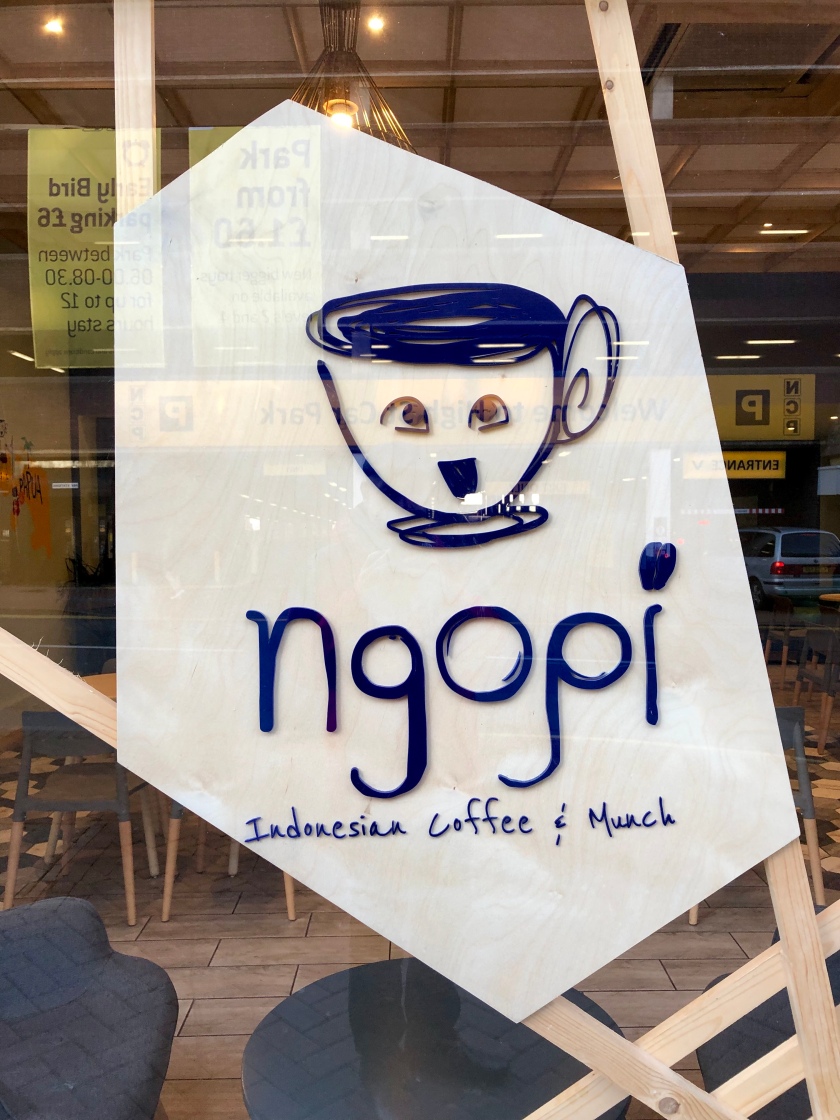 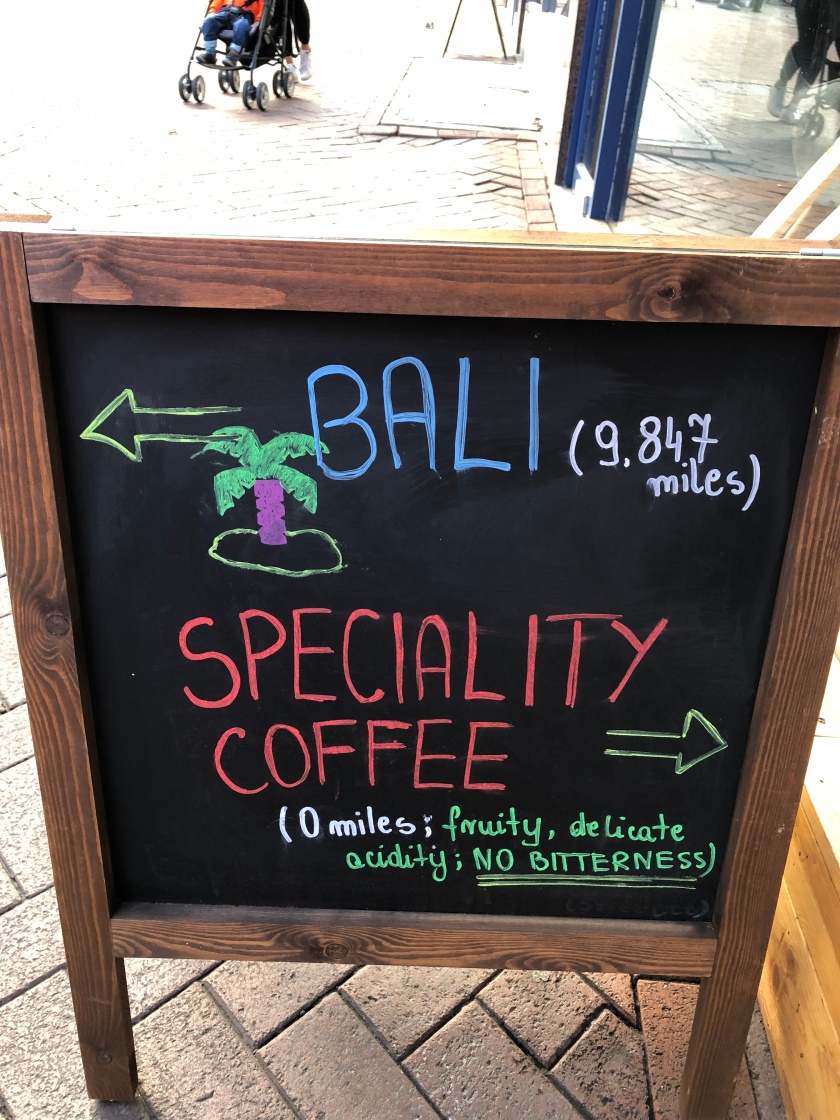 I used to spend a lot of time nearby in my youth.

The cafe is practically next door to a doorway that takes me back to a time and a place where I felt a part of my personality was formed. It’s definitely a little jigsaw piece of what made me… me. 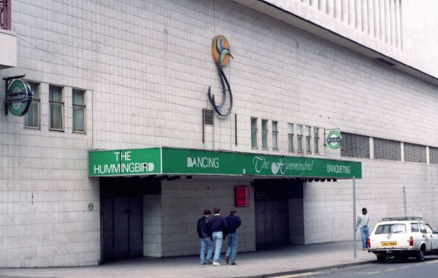 Here young Davey destroyed many many brain cells and also danced an awful lot whilst in the pursuit of both oblivion and the opposite sex.

I’m happy to say that I managed to successfully accomplish both objectives in that building and whilst many of the memories of my time there are unsurprisingly vague they are all universally cheerful ones.

Yesterday though I was just there for the coffee – and although it was rather tiny my Americano was undeniably lovely. 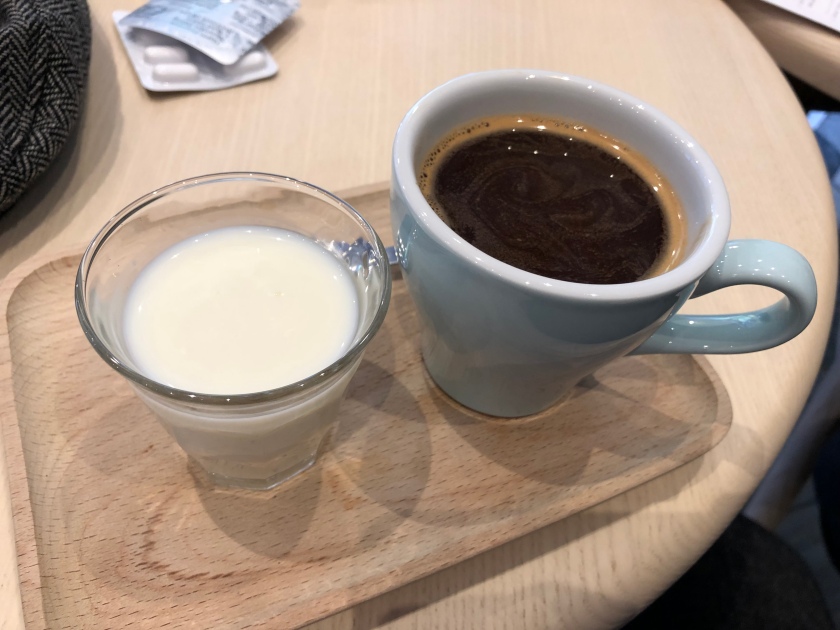 Unfortunately despite the early start – and being literally the first people through the door at opening time – we soon realised that the main attraction was still being prepared. 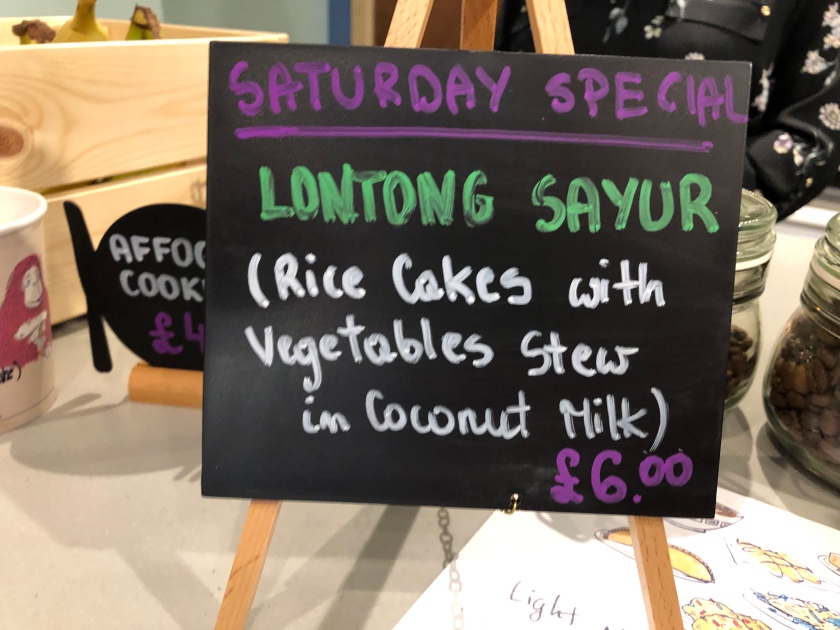 Lontong Sayur takes well over two hours to cook – and despite it usually being a breakfast treat we were informed by the lady on the till that it would not be served until midday.

So, since it would be rude to just sit doing nothing for two and a half hours we decided to have a light bite and come back a bit later for the main attraction. 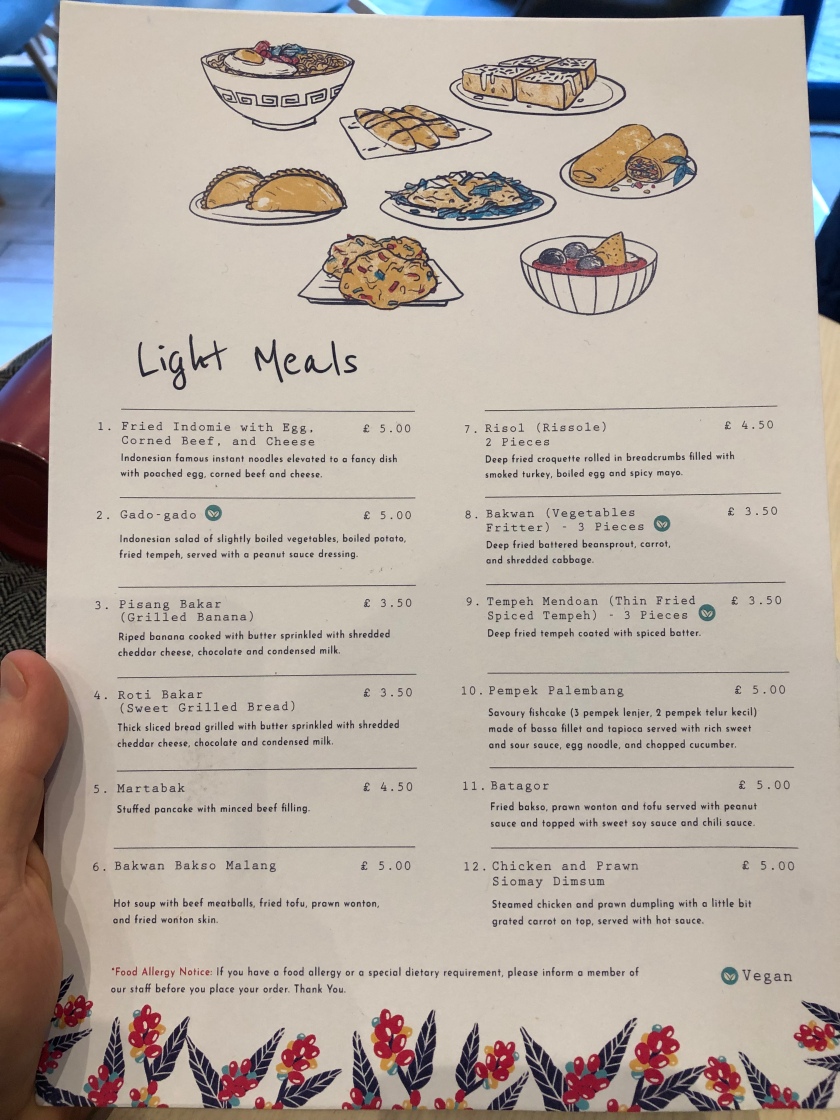 On my brother’s advice (I have practically no experience of Indonesian food) I ordered Bakwan Bakst Malang as it seemed the most SW friendly item on the menu. 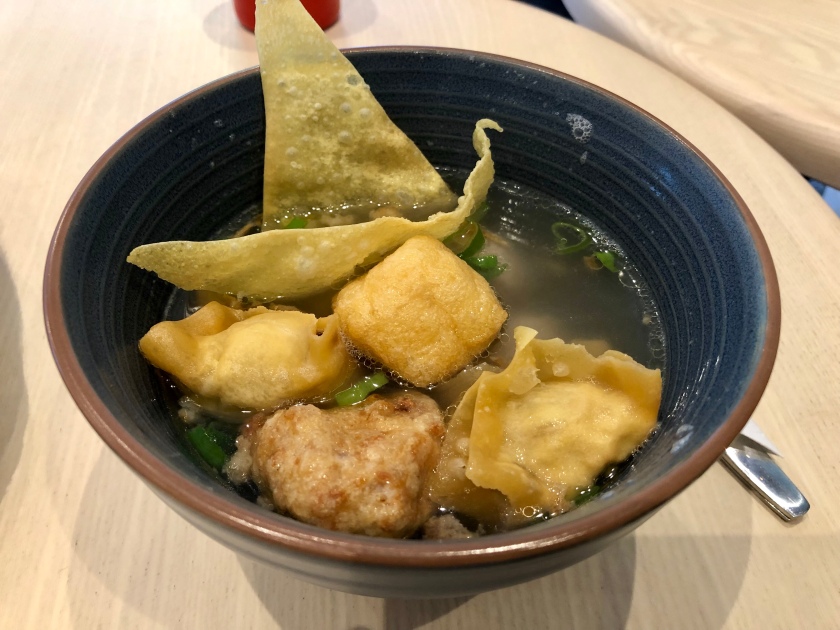 My sister in law chose the same, whilst my brother ordered the Chicken and Prawn Siomay Dimsum. 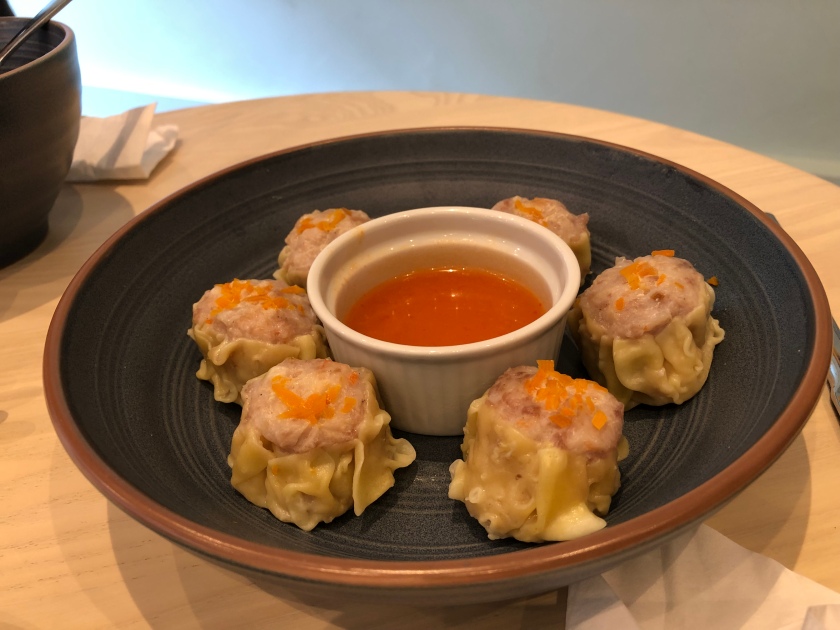 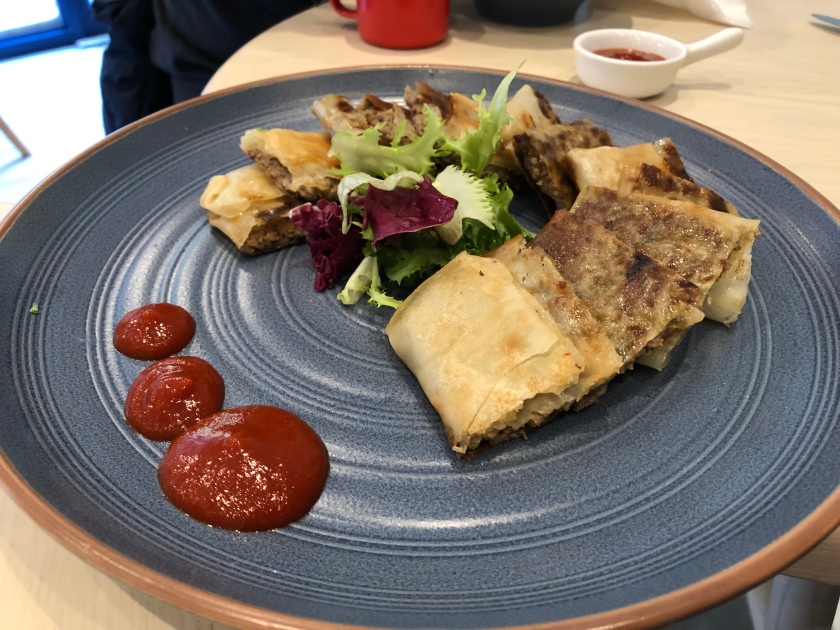 As a platter to share he suggested we also get a plate of Martabak (which came helpfully cut into little squares) and once it all arrived we began to tuck in.

I have to be honest – clear broth has always turned me off trying food like this – and on reflection I think I’ve been really missing out. 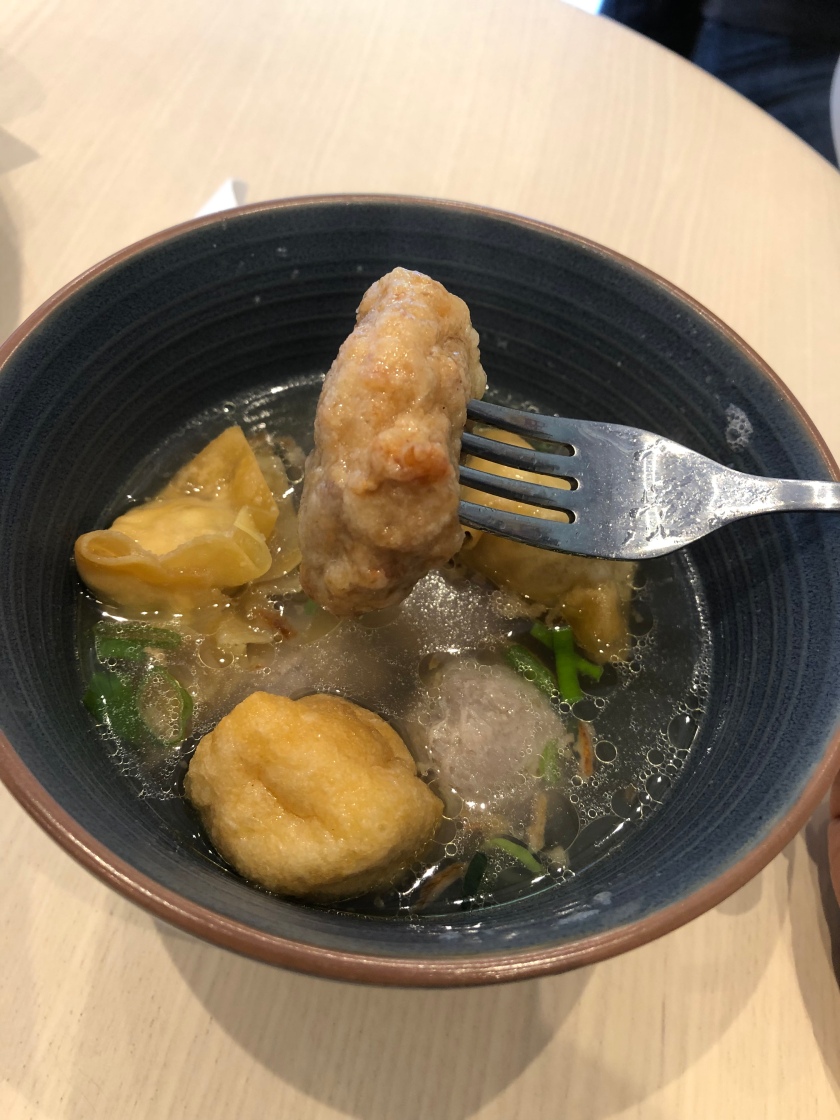 The beef in my dish was cooked to perfection and the flavours were delightfully delicate too! What’s more the Martabak we shared was flipping delicious and I think it was easily my favourite one of the three dishes.

Once we’d finished it was nearly 11am. The next course would be ready for another hour, so we decided to mooch.

Birmingham has a really nice Chinese quarter – and from an Indonesian perspective this area is basically Mana from Heaven. Every single unique item that you won’t find in a UK supermarket (vacuum packed chicken feet anyone?) can be found here, along with a selection of drinks that you don’t see anywhere else. 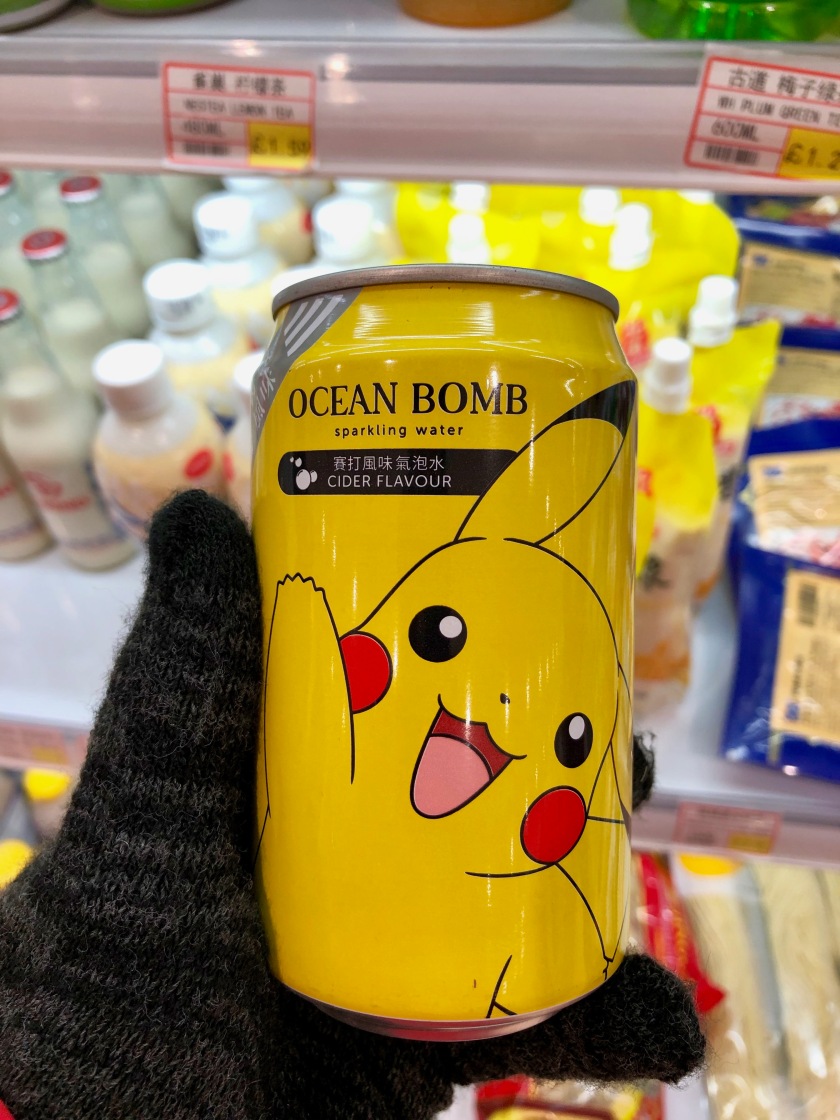 I was very tempted by a cider flavoured Picachu – but eventually decided against it because the vast majority of this can’s contents appeared to be corn syrup and sugar. I’m particularly wary of the former (the latter is no good either) and anyone that suffers from or has previously had diabetes should be too. It’s really not good for you (link).

I put the pretty little Chinese can of evil gently back on the shelf, briefly examined a bag of chicken feet and then we headed back to Ngopi.

We were bang on time – and once she had her bowl of Lontong Sayur in front of her the broad smile on my sister in law’s face said it all. She had what she’d come for.

A taste of home.

A taste of her life as a child.

(from Wikipedia – link) In Indonesia, especially among Betawi people, lontong usually served as lontong sayur, pieces of lontong served in coconut milk soup with shredded chayote, tempeh, tofu, hard-boiled egg, sambal and kerupuk.[4] Lontong sayur is related and quite similar to Ketupat sayur and is a favourite breakfast menu next to bubur ayam and nasi uduk.

She wasn’t the only one smiling. The small coffee shop was filled with local Indonesians (many of whom looked like students) and for a brief moment we were surrounded by the sounds and people of her home.

The music playing, the cheerful people, the children running around, and the food (which every single one of them was eating) gave a sense of place. The dish united all of the cultures in the room and brought everyone together with a sense of belonging.

Food is a fantastic way to bring others in to your world  – and as we sat around the table she explained the dish whilst inviting us to taste the constituent parts – which were really really nice!

She looked happy and It was clear that the journey had been worth it. 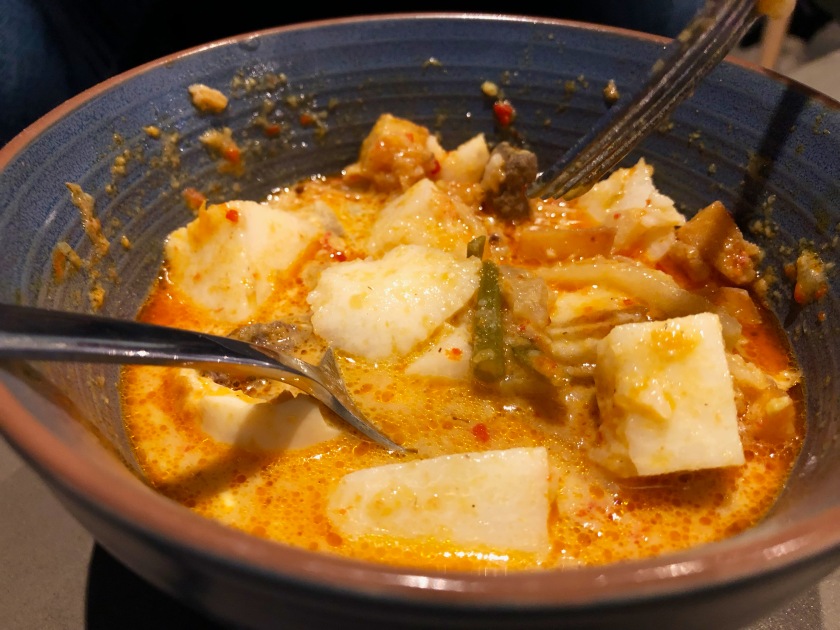 As we left (thanking the staff for their cooking) each of us seemed toasty both inside and out. The food had been lovely – but the sense of belonging had warmed parts in a way that nothing else could.

As we parted company and they headed back to the train station I headed off on my own further into the city centre to explore, whist thinking about my own past.

Dale End (as rough as it’s become lately) had brought back a lot of memories – and the rest of Birmingham was doing the same. 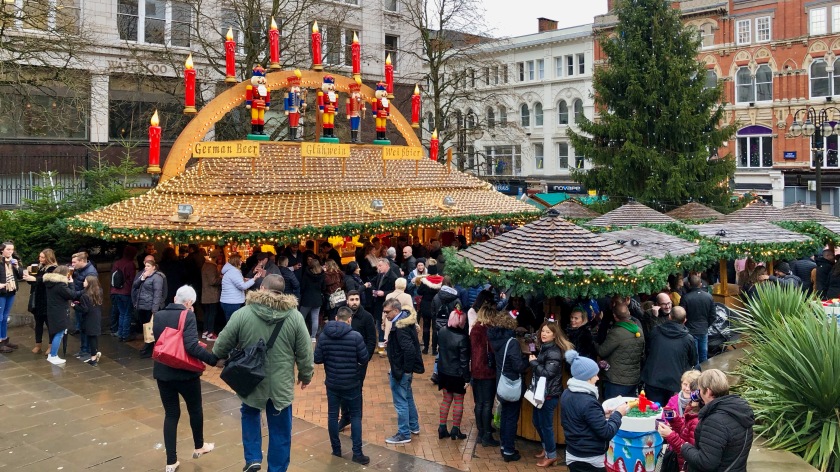 After walking through the heaving German markets (which are less markets and more stand after stand encouraging people to buy huge amounts of alcohol in litre sized glasses followed by tons of fattening food) I found myself in another old haunt.

In here I am Batman and I used to be him every weekend without fail. 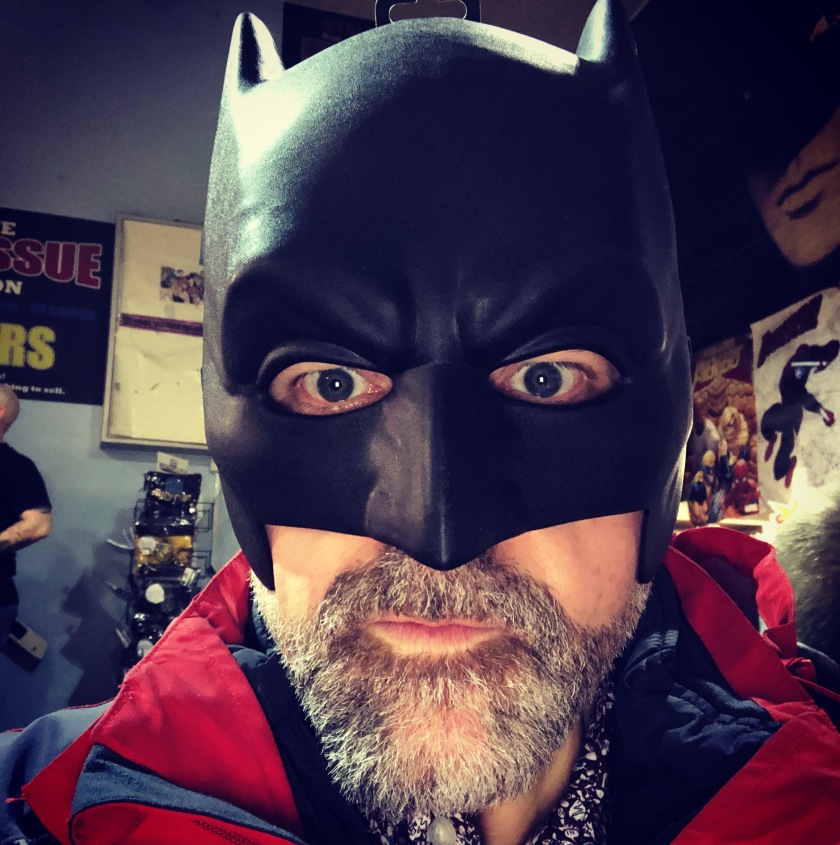 As much as some things change others (like my geekiness) remain just the same.

As I walked upstairs to look at the dusty back issues from yesteryear and see if there were any bargains I turned to look behind me.

Even though the downstairs area is far cleaner and more sanitised than I remember it (it’s all bobblehead figures and rack after rack of really expensive graphic novels now) the same movie posters that I’d seen when I first walked in are still on the back wall. 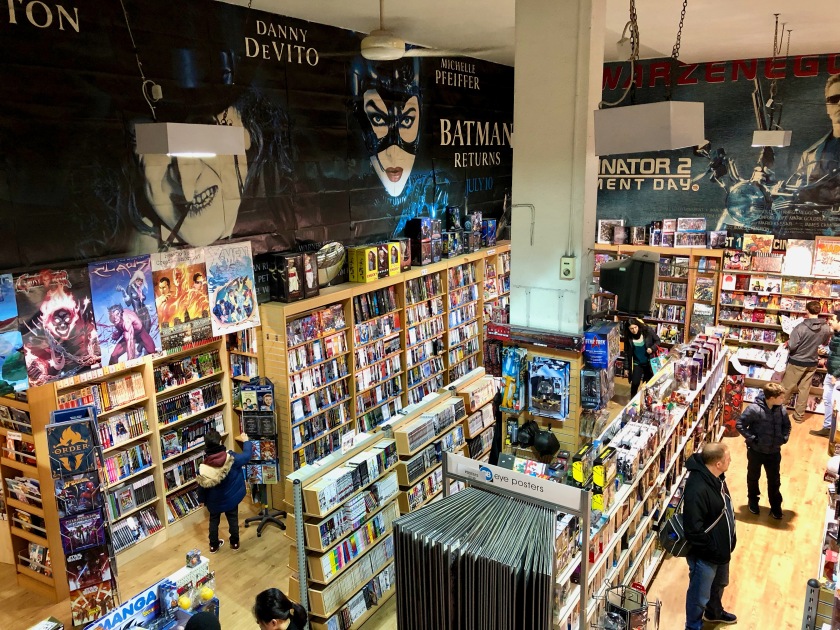 On the plus side there are way more women in the shop these days – and significantly less body odour – so there are at least two areas where definite progress has been made.

As I left (empty handed) and continued to wander through the city centre I soon found myself passing under a rather sad looking bridge. 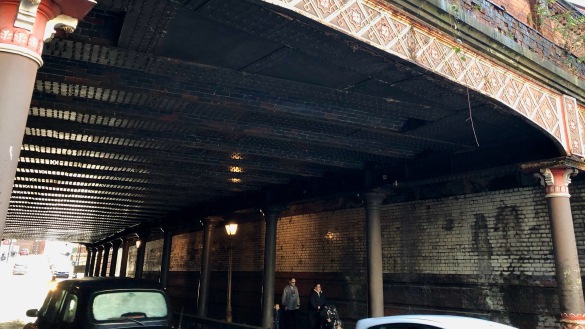 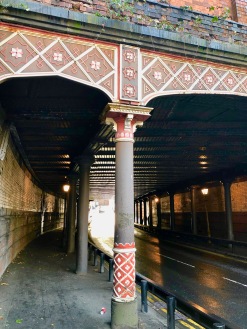 I’m not sure why I stopped to look at this, but I did.

I was transfixed by its rusty rivets, peeling paintwork or its vaulted iron and brickwork ceilings – and for a moment I felt like I was just where I needed to be.

It’s not concrete. It’s not prefabricated. It was created with love, care and attention to detail, in an era where utilitarian things didn’t have to look bland or ugly.

They spoke to a sense that we can express ourselves even in the mundane, and in doing so this bridge still evokes a sense of place and history for me that a rebar infused flyover simply does not.

To me, at that moment in time, this tiny piece of urban decay felt like home.

It spoke to me of a youth that may have been wayward and lost in many respects – but in others it was creative, unfettered and hopeful.

This place is part of the story of me.