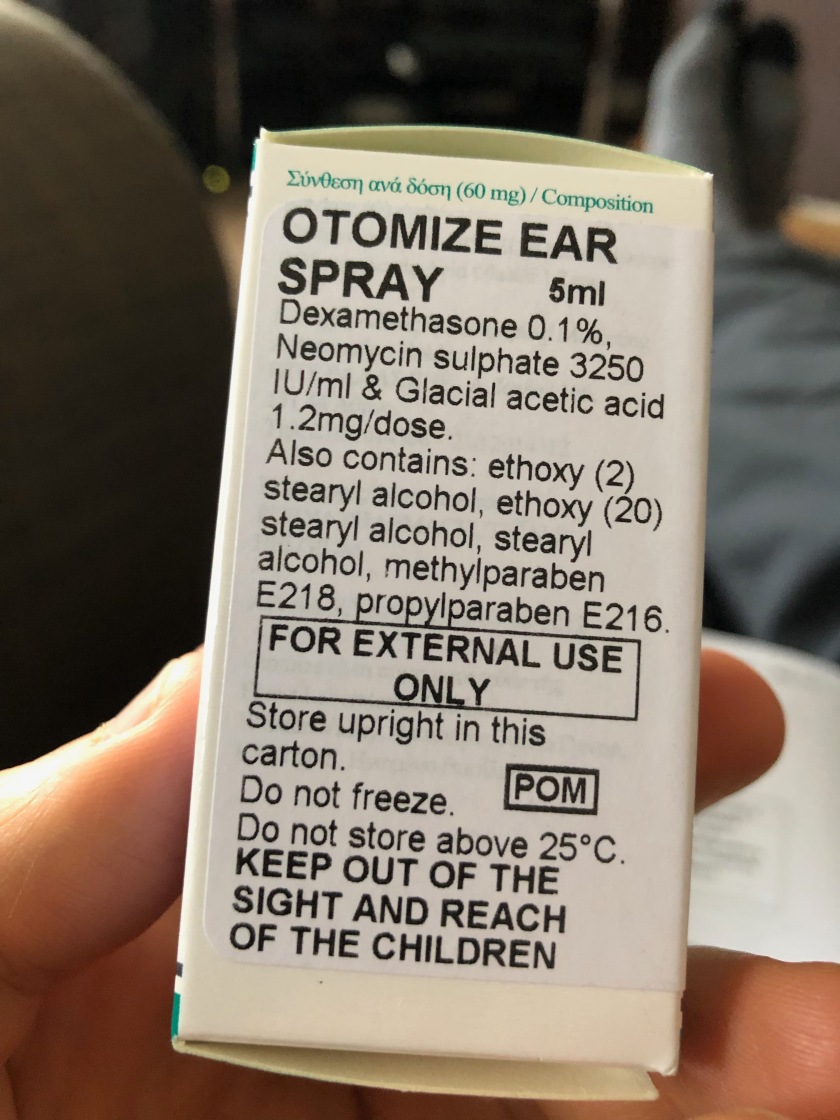 I dislike doctors waiting rooms with a passion and in this respect I doubt I’m alone.

They’re always full of ill people and there’s nothing worse than sitting in one when you don’t feel really sick. Although… in my case I suppose that’s not strictly true because I don’t feel very normal at the moment.

Ever since my vertigo episode things have been a little ‘off’ upstairs and I’ve felt like I’ve had a mild hangover that’s stretched all the way through from Sunday to today. I also have a sore throat and aching ears. Despite taking the pills I was prescribed the symptoms seem to be persisting and I’ve felt a little disoriented, dizzy and ‘off balance’ ever since.

The A&E doctor suggested at the time that an inner ear problem may have been the cause of my sudden descent into temporary Vertigo Hell (link) however when I was examined there weren’t any issues that were immediately apparent.

Worryingly the only other possible cause he had to offer was ‘a brain issue‘.

Little did he know that many people have told me over the years (particularly the opposite sex) that I don’t actually have one.

The joke’s on him!

(Author is called from the waiting room where he’s been sitting to see the doctor. He then heads home after a visit to the pharmacy…)

Well, in the spirit of my usual disarming honesty I may as well discuss here what I talked about in my doctor’s consultation – because from a weight loss perspective I feel it has relevance.

My ears are also worth talking about before this. After my last blog a surprising number of people said they or someone they knew had experienced the same thing and this may be helpful. The causes and symptoms of what happened to me were unknown and terrifying – so I think it’s important I share what I’ve learned in case it befalls a reader.

I apparently have a viral ear infection called Vestibular Labyrinthitis – which it seems is a common cause of sudden onset vertigo. 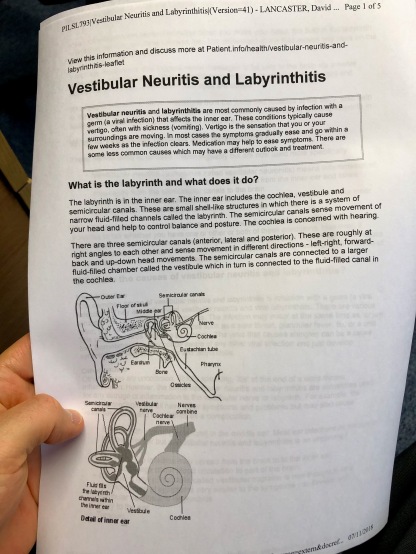 This doesn’t require any antibiotics, is treatable with an ear spray (Otomize) three times a day – and hopefully in my case this will sort the problem out over time.

From what I’ve read in the literature (that the doctor helpfully printed out for me) the symptoms are pretty text book – so the search for my missing brain has been called off before it ever began. It seems like we’ve found the culprit thankfully – but I’ll keep you advised of the progress and hopefully let you know conclusively as time goes on.

The first spray of the day is settling into my ear canals as I type and I have my fingers crossed.

Whilst with my GP I also discussed something else that’s been in the back of my head for a while – but isn’t a topic that I’ve really paid any serious consideration to (or worried about) until quite recently. 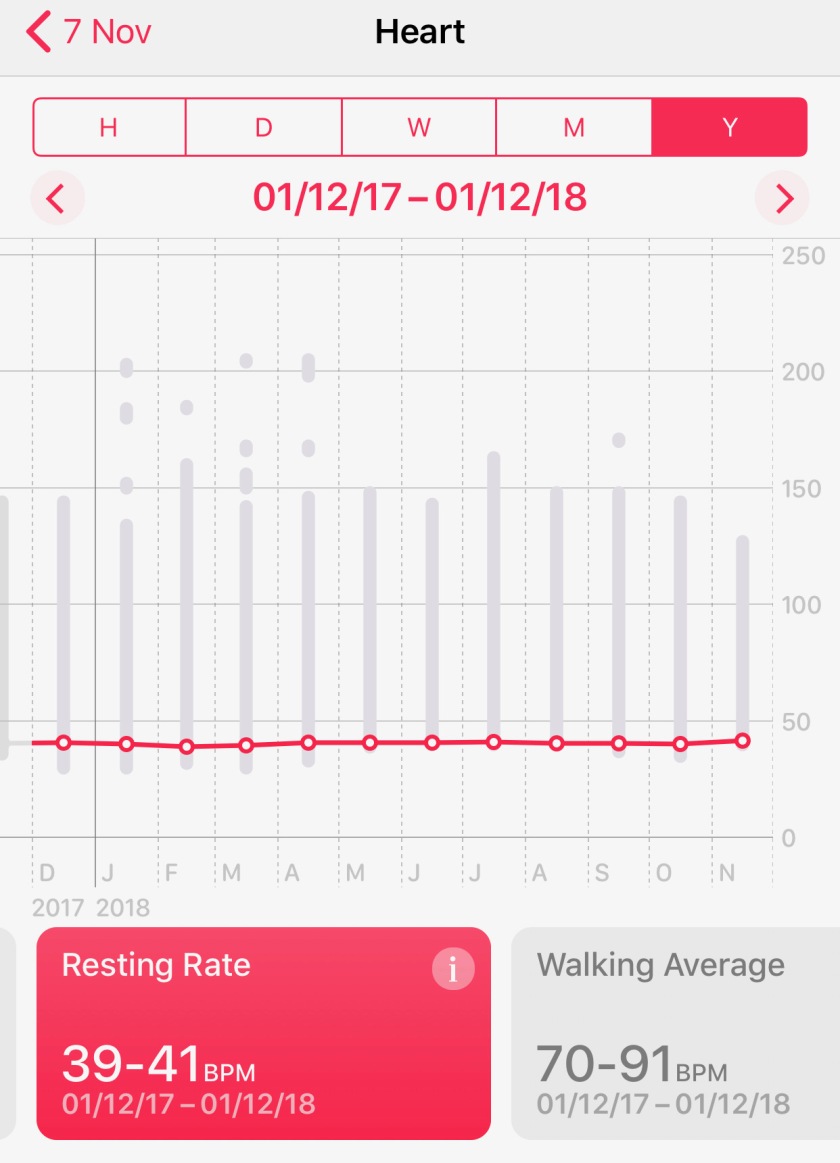 When I initially noticed this I was in a Slimming World meeting in 2017 and Angie had invited a guest speaker into the group to talk about fitness, how muscles burned calories and adult heart health.

It was at this point (when I looked at my Apple Watch, whose o/s had just been updated to enable the tracking of this stat) that I realised my resting heart rate was lower than practically everyone I knew – in fact it has more in common with an athlete than a man who had just moved from being colossally unfit to just walking an awful lot.

I dismissed it at the time and put this figure down to the fact that I was exercising so much.

I typically burned (back in 2017) between 1500 to 2000 extra kcal a day according to my stats. I never got out of breath and I was full of beans. Therefore my RHR had to be due to fitness right?

The more I thought about it though, and the more that health professionals (and pretty much everyone else) looked completely confused when they saw it (this has happened a lot, not just in hospital on Sunday) the more I wondered whether or not it was actually a problem.

The truth of it was I smoked, drank and ate to excess for years, did almost no exercise and was practically unable to breathe in almost every position.

How on earth could I be so fit now without any lasting consequences from the abuse I subjected my body to?

As I started to try and rationalise the problem in my mind I wondered if my excessive size and rapid weight loss with exercise had actually given me unexpected benefits.

This is all plausible enough in my own head – but I’m no doctor and honestly I’ve never actually asked one directly whether there could be any long term consequences related to being who I used to be.

So, after a casual comment on my vertigo blog post relating to Brachycardia (a condition wherein an individual has a very slow heart rate) I decided that since I was visiting the doctor about my vertigo anyway I’d ask the (rather scary) question.

Is my low heart rate a problem?

The short answer is that it depends how you look at it.

After listening intently to my heart and asking questions about whether I had any symptoms that could be problematic I’ve been told by my GP that I have an underlying condition that unless I seriously change my habits is completely untreatable.

I’m ridiculously fit and healthy and unless I start eating pies and lying on the sofa all day long immediately it’s unlikely that this will change any time soon.

It’s not often that you get such devastating news – but honestly I don’t think I can face giving up carrots so this is probably going to be with me for the rest of my life.

All flippancy aside though – I’m aware that readers may have their own, not so great diagnosis or underlying heath conditions and may not be in the same boat as me.

It’s not my intent to be triumphalist about the fact that I’m healthy – but it IS my intent to highlight that from what seems like a place of absolutely no return, where a slow and very painful death seems to be the most likely outcome there is hope.

All of these things seemed completely impossible a relatively short space of time ago – and now here I am, still fighting the odds, and proving that a healthy diet and exercise along with clean living can produce what some may consider to be a miracle.

It’s not a miracle though.

So – if you’re looking for an excuse not to, and thinking (because everything looks physically dire) that change isn’t worth it, here’s the proof that you’re just making excuses.

Just do it internet.

You have nothing to lose and everything to gain.