You join me for part two of my adventures in Birmingham. Part one can be found here.

After the rehearsals we were all free to mingle and check into our hotel rooms. Thankfully Angie’s wonderful husband had transported all of the luggage by car whereas Angie and I had both caught the train – so there had been no need to carry anything but wallets and smiles.

We were staying at the (rather swanky) Hyatt hotel, which Slimming World apparently use a lot for these events at the ICC. There’s a sky bridge connecting the two complexes – which for the purposes of just being able to walk right in to the hotel from the auditorium (or vice versa) is ideal!

As seems to be the case when you’re a guest of SW they really look after you. 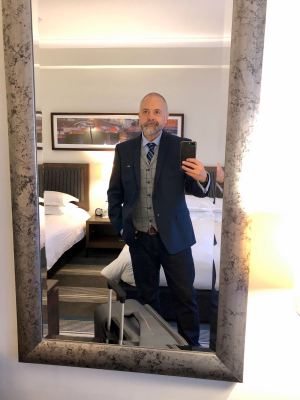 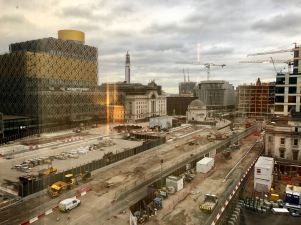 My room was a spacious and comfortable double twin (for myself and a friend, who was arriving later) but unfortunately you couldn’t really proclaim that the view was spectacular – because Birmingham is undergoing some serious regeneration at the moment!

After a short while chilling in my (very relaxing) hotel room my friend arrived and our little party met up in the bar downstairs. It was at this point that I told him about something I’ve actually wanted to do for a while – and on this particular day.

When I was made redundant in July 2016 (already a few stone lighter) I took this selfie with him. 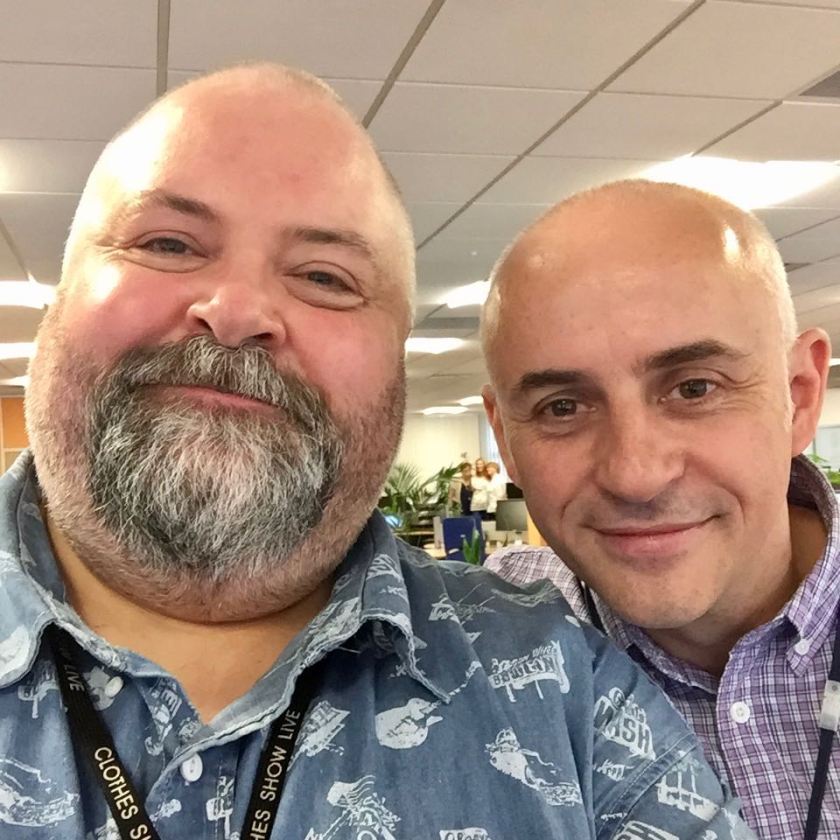 There are a lot of mixed emotions in that picture. At the time we were both leaving jobs that had defined our adult lives and had lasted for between 16 and 18 years. We’re both smiling but I know how we really felt about a whole variety of things – both employment wise and personally.

Life has moved on though and as it does it has a way of showing you that adversity can take you in one of two directions. You either fall over and don’t get up or you just carry on and do your best. 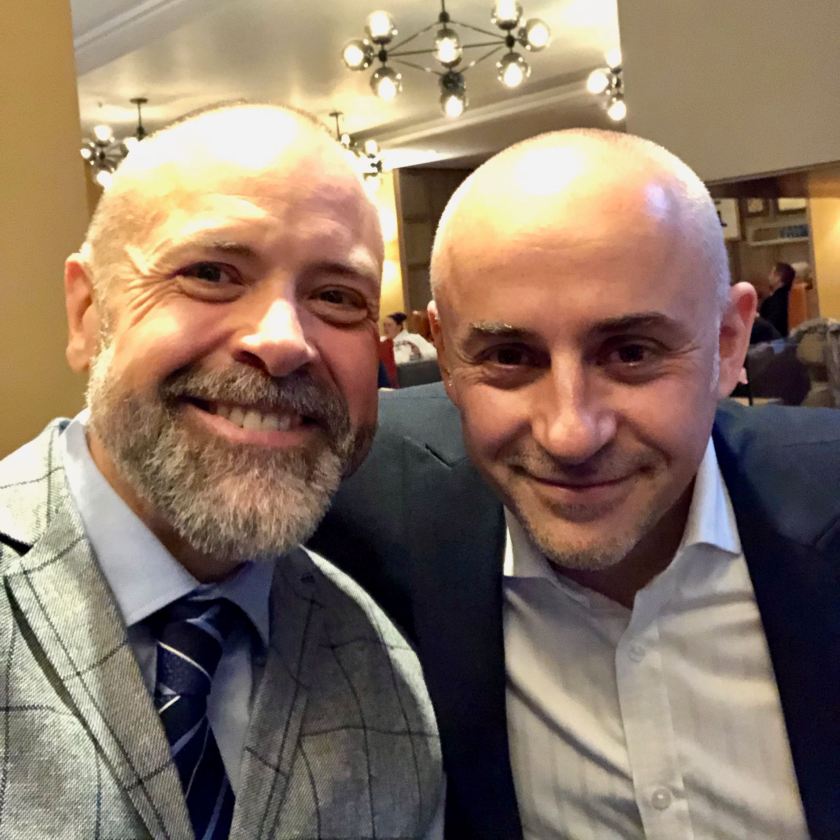 I’m of the opinion that we both look well despite the passage of time. The same but better.

He, like many others in my life, has been there every step of the way (literally – we twalk all the time) and it was great to be able to bring him along to the event with me to share the moment.

Shortly after we headed for a few complimentary drinks (diet coke in my case), a quick photo opportunity and then into the (now absolutely PACKED) auditorium.

As we took our seats down to the left of the stage (for easy behind the curtain access) I looked around me.

The table was perfectly arranged with little heart shaped boxes of minty sweets, glossy programmes and lots of pre-ordered drinks for the guests we were seated with.

The glossy brochure had my face in it (!) as well as the couple sitting next to us – Glyn and Gillian Woodward (link) who were really lovely.Between them they’d lost almost 24 stone – although Glyn told me he’s actually lost a further five stone before he joined – taking their total to a much bigger number! 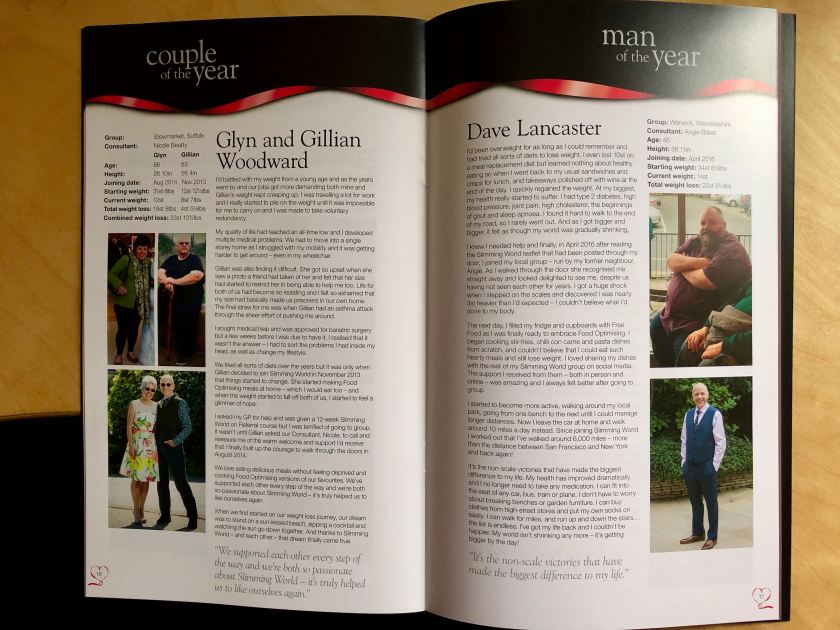 To be honest at this point all I could see were crudités, I’d not eaten at all so far, and by now it was around 7pm and I was ravenous.

I tucked into the olives and cherry tomatoes as the event began. 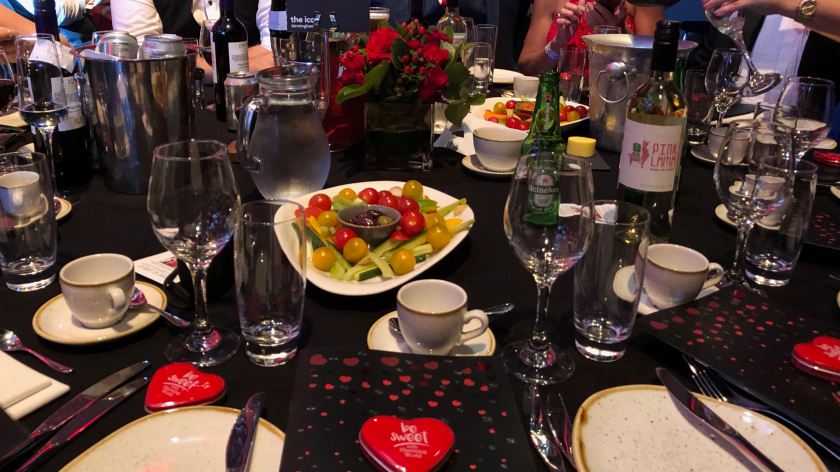 What an awesome feeling it was! To be part of all this! It’s so incredible to think that I’ve moved from feeling so low and pathetic in life to being seated amongst all of these people both as a winner and special guest.

It was just mind blowing.

After a short speech by the Slimming World founder Margaret Miles Bramwell (who I’d been introduced to for the first time earlier that day) she introduced the Special Guest star – Rylan Clark-Neal onto the stage (who I’d also met earlier at the photoshoot) to great fanfare.

We were second from last in the final group to be called up – and while we waited at our table we got to watch from the other side of the curtain as all of the wonderful people went through their success stories.

Before long however WE were about to go out onto the stage. 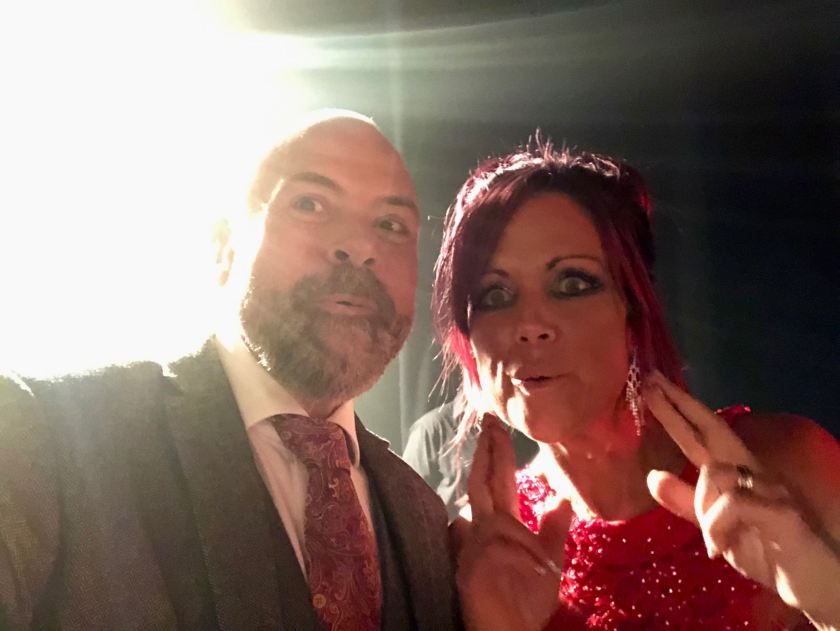 As we waited they played my Slimming Wold video – which I watched, with a lump in my throat.

Then, we were there.

Although I had absolutely no idea who he was before this event I have to say I rather liked Rylan. Although initially he seems all teeth and smiles the truth of it was he came over as a genuinely nice guy, and I found myself instantly warming to him.

He asked me what was important about the journey and staying on track – and although it wasn’t what I was expecting him to say it enabled me to talk about something that I’m really really passionate about.

If you have facebook then you can find a video of my moment on stage (it’s not mine unfortunately so it may at some point be removed) that’s pinned to the top of my public profile – here.

Although when Angie was asked her question and told the 2000 strong (mainly female) audience that I was not only single but ‘ready to mingle‘ (and she’s not wrong – I am) I feel that my surprising level of comfort with the cheerful compare may have muddled up her message somewhat because I immediately flung myself into his arms.

It got a laugh at least and he is absolutely lovely – so I regret nothing! He’s ace!

It’s not often that you’re made to feel like a rock star – and even now (with everything that’s happened lately with Slimming World) just when I think I’ve seen everything that my recent success could throw in my direction it ups the ante.

When this happens it shows me (once again) that their slogan ‘touching hearts and changing lives’ is more than just empty corporate rhetoric.

It’s a state of mind and a philosophy that seems to run throughout the DNA of the entire company.

It’s important to note that I’m not paid to say that and although I’ve have a title bestowed by them I’m a free agent.

I speak as I find – and I find nothing related to my own experience to stop me unreservedly recommending what they stand for and what they can help everyone achieve.

All who are associated with this juggernaut of an enterprise have in some way shape or form had a battle of their own that’s either being conquered, is still being fought, or that affects a loved one.

The select few who have never had to lose weight absolutely get the pain that others go through – and in my experience they want nothing more than to help people that feel they’ve lost all hope.

When a few thousand amazing people join together as both consultants and members competition winners the atmosphere is nothing short of electric.

It’s impossible not to be bowled over when such an audience not only greet you with applause but follow this with endless hugs, kisses, tearful sharing of stories, requests for selfies alongside genuine outpourings of solidarity and heartfelt understanding.

It’s like a tidal wave of compassion and it’s truly difficult at times like these to know what to say.

(you don’t think I’d tell you EVERYTHING that quickly do you?)

Come back next time for more…