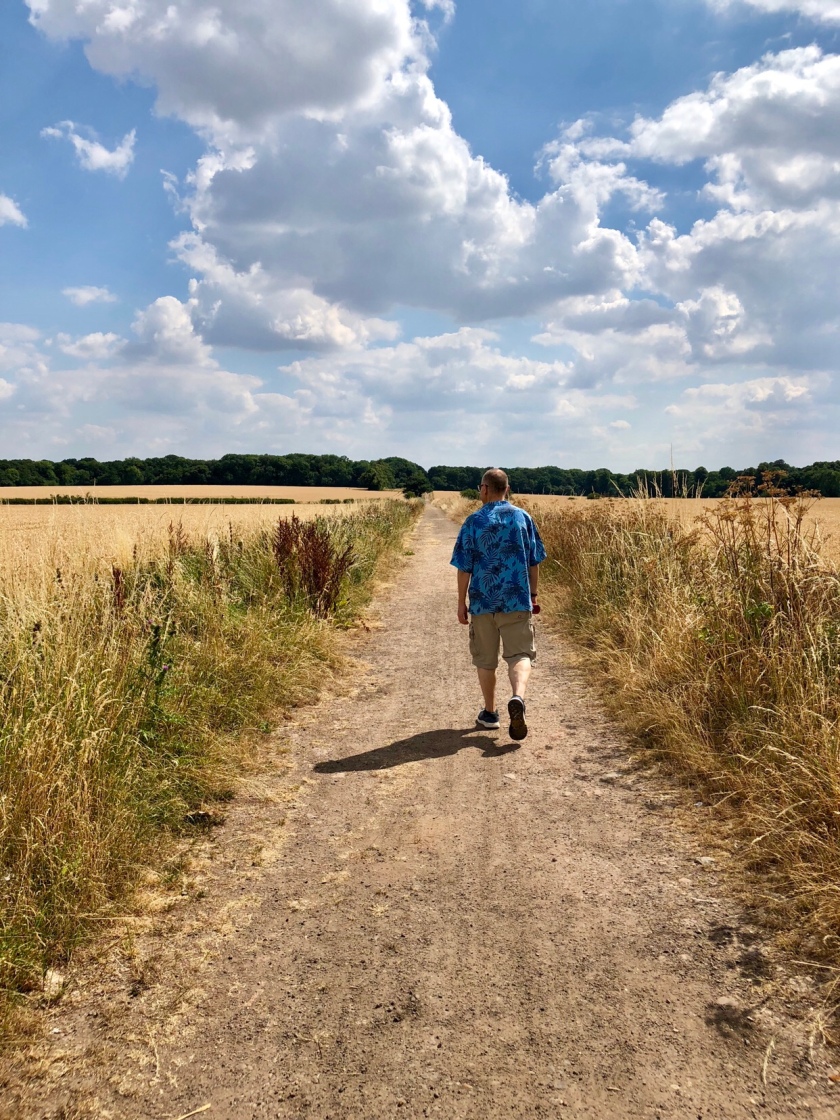 So far it’s been a busy weekend and I’ve been doing a lot of talking to a lot of people about lots of things.

It’s trying to move in a million different directions at the moment – and probably as a consequence of trying to flatten several mental mountain ranges I’ve been getting a limited amount of sleep since last Sunday.

The event at Slimming World left me with a lot to think about.

I’ve been keen to absorb and contextualise the stories that I heard whilst I was there – as well as process the feelings and realisations that remained afterwards.

As you all know – I walk a lot and all of a sudden I found myself worrying that readers might see this as a barrier to their own success.

What I don’t want is for someone reading my blog to say ‘I’m never going to be capable of losing weight because xxxx physical disability prevents me from moving like him.’

If you have ever thought that way – firstly let me apologise if I’ve made you come to that conclusion – and secondly let me try to re-format your way of thinking.

Last Sunday was a real eye opener because something that genuinely left me thinking how lucky I am to be at my current place in life was the number of contestants that had managed to lose similar amounts of weight to me without the same level of exercise.

Many simply couldn’t do what I was doing because they suffered from serious disabilities. Some of these were aggravated or caused by weight – and others completely unrelated.

The massively impressive thing was despite serious mobility problems that were unlikely to go ever completely go away they still succeeded in their goals and managed to reach their targets.

They just followed the Slimming World plan and they saw the results.

In every case that I was confronted with the benefits of profound weight loss were plain to see.

These men’s quality of life was dramatically improved and every single one of them had seen life changing results.

To one this meant the difference between being completely confined to a wheelchair or being able to move about on crutches under his own steam.

It was clear that whilst he still had major challenges in life his health and future outcomes had been massively improved by his efforts to lose weight.

His still limited but greatly enhanced mobility was a gift and he recognised it as such.

I take my hat off to that man and others like him – because I know from personal experience how hard it can be to mentally move from being almost completely immobile to a head space where you start trying to make your way around what appears to be a threatening world.

When you do it’s a fearful place to inhabit.

You feel vulnerable and scared because you’re not in control. You don’t know how far you can go and you often don’t trust your body to get you home again.

It’s painful, embarrassing and sometimes even humiliating when you start – but these men showed me that there’s simply no excuse not to.

The truth of it is anyone can do what I did. All they have to do is want it enough.

I’m just determined – the same as the other 41 men I had the pleasure to spend time with.

The day we shared provided me with a really serious reminder that I’ve somehow (through a crazy genetic lottery) managed to return myself to a level of health that I probably do not deserve.

Truthfully there are times that I feel a level of guilt about that – because I have close friends whose health suffers for no good reason whereas I’m somehow doing ok.

Life just isn’t fair – and there are times I wish that I could give the health I have now to others that I love.

I’d give anything to repair the problems they have.

Instead the very best that I can do is keep walking, keep talking, keep trying, and give as much back to those that helped me and those that still need help as I possibly can – and to that end I feel more driven than I ever have before.

This morning I got up early.

The sun was shining and I was aching to get some miles in.

I’ve got a seriously busy week ahead of me – and I suspect that in my case busy will not necessarily translate into active.

I need to get my distances up otherwise my OCD regarding exercise will start tingling like spidey-sense.

After further discussion with Angie I’ve again tweaked my target weight and we’ve agreed to set it to 14st on the nose.

In my underpants the lightest I’ve been over the last couple of weeks has been a few pounds lower than the picture below – and quite out of the blue I find myself sitting comfortably in a new weight bracket.

I’m (for the first time in my book but not on my own scales) under fourteen stone!

Yesterday (immediately after weighing in and telling all of the people in group about my adventures at Slimming World HQ) I headed out for a long walk.

My friend with the poorly paw is slowly improving and we’ve now graduated from hobbling around a flat mile in St Nicholas park to a five mile dirt track jaunt to Coombe Abbey.

Going for a stroll is a pretty hot and dusty undertaking at the moment – but the great thing about going to Coombe is the shady bits.

This is just another example of a place that I didn’t know existed until a year or so ago – and now I visit it a lot.

I’m beginning to love the change of seasons and how different the landscape and wildlife looks as the months pass.

It’s a flipping lovely place and no mistake!

Today I’m still trekking about – and I’m on a mission to wander and enjoy the world before the madness of the working week kicks in again.

I want to do as much as possible before I’m jolted back to reality.

Maybe unsurprisingly the start of the day was in St Nicholas park.

It’s somewhere that I’ve been indulging in a rather public love affair with for over two years now – and my amorous intent shows no signs of letting up any time soon.

As self indulgent as all of this wandering and photography seems there is however a purpose.

I take all of these pictures and talk about my walks for a specific reason.

I want to show anyone reading who is in a similar place to the one I used to be that there’s a world out there.

It also doesn’t have to be viewed on a 65in 4K HDR television from the comfort of your armchair.

It doesn’t matter how far you go as long as it’s a little further than the day before.

Every tiny little inch you move will make the next inch easier – until the inches become feet, the feet become yards and eventually the yards become miles.

You can do it internet. Get out there and experience the world you live in and be happy.