(This post started it’s life on Sunday morning. It was early. VERY early….)

It wouldn’t have taken someone with acute betting acumen to have laid odds on me being wide awake at 2.30am on the morning of the Slimming Man of the Year Awards.

I just can’t manage to push it out of my mind. Last night I was endlessly trying to get straight in my head what I wanted to say when asked.

There’s so much to my journey that compressing it into a brief five minute (maximum) talk seems impossible – but compress it I must.

Unlike my usual ‘it’s ok to wing it a bit’ attitude to public speaking – in this case I have one opportunity to show everyone who I am in 300 seconds.

How do I cover all I’ve achieved in such an insanely compressed timeframe?!

I’ve realised now though that when you’ve gone over something again and again until all you can see on the page is a massive wall of alphabetti-spaghetti it’s time to take a break.

It’s now 4am. I still can’t sleep. I’ve just stepped off my exercise bike after a 40 minute hill climb programme – and I’m dripping with sweat. The house is boiling and even though I’ve stopped pedalling my pulse rate still seems to be elevated. It usually drops a lot quicker.

Maybe a cold shower will help.

(Has a cold shower)

Well that didn’t help either – so I guess the only thing to do is get up.

(Gets up, potters about, does some ironing. Gets outfit ready, takes a selfie before leaving for the day.)

Despite it being quite pricey (at least by my standards) I decided to buy a swanky new tie for the event.

I’ve been coveting this lovely little piece of silk ever since I strolled nonchalantly past it in M&S the other day and fell in love. 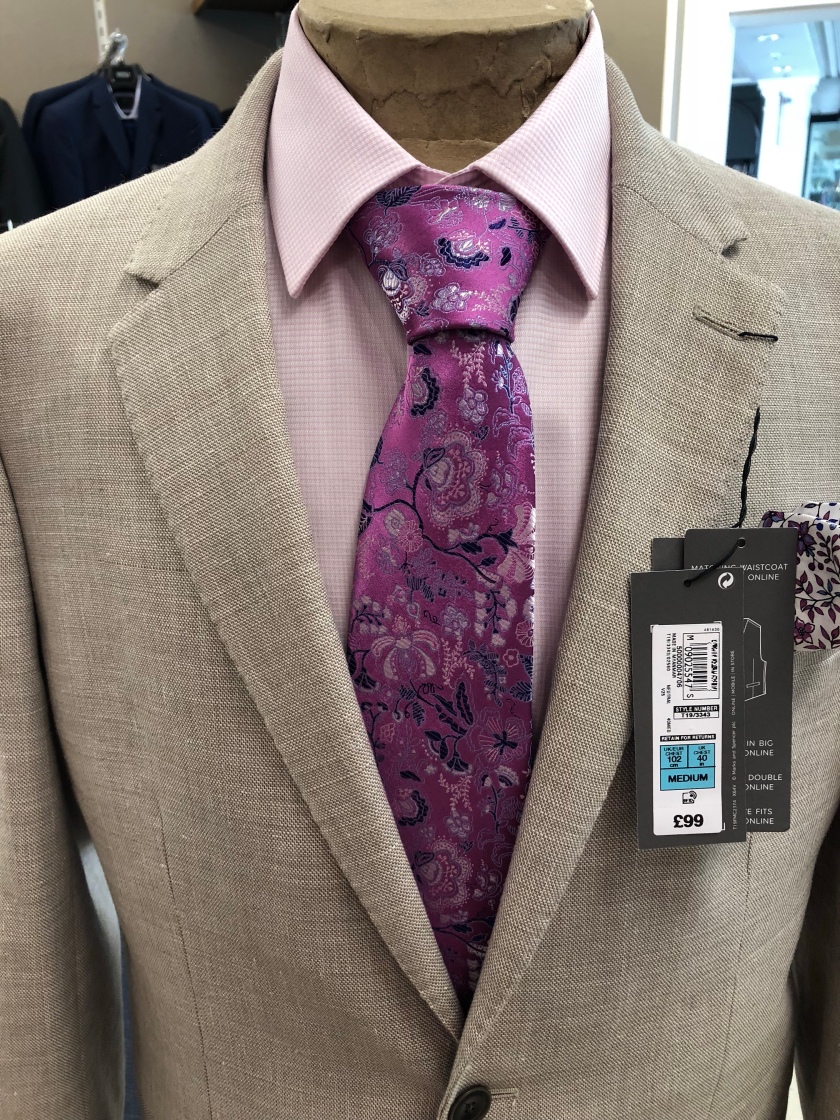 I probably would have gone for the same shirt colour if it wasn’t such a ridiculously hot day.

No-one looks good when they have sweat leaking through a coloured cotton shirt, and although this isn’t really a problem normally I had to be realistic.

It was going to be a long day and I’m human.

Spending a little money is worth it though in this case and I’m glad the people that I asked for an opinion urged (or rather cajoled and pushed) me to buy it. There’s a real joy to being able to walk into a room not feeling like you’re wearing a giant sack to hide your flab – and now I can dress myself with ‘normal clothes’ I want to look my absolute best all the time.

At the moment I like what I see in the mirror.

It took a lot of hard work to be able to say that – but it’s the truth. I feel proud of what I’ve done and who I am – and crucially I feel no guilt about that.

I feel dog tired but also glad to be alive.

A couple of years ago I didn’t think I would be here now and it boggles my mind to think that instead of being buried in a box or cremated and sprinkled over my armchair and Playstation I’m a semi finalist in the Slimming World 2018 Man of the Year competition.

Maybe also because the world is sunny and I can hear the birds outside it doesn’t mean a darned thing that I’ve had zero shut eye. I’m totally jacked up on adrenaline (and a little caffeine) if I’m honest which is just as well because I’ve got to drive to Derbyshire after picking up my consultant Angie.

There’s so much to think about and do!

(Author drives to his consultant’s house and finds a similarly nervous mirror of himself trying unsuccessfully to do the zip up on the back of her jumpsuit.)

Well – initially things seemed to be going well. After sorting out wardrobe malfunctions out we jumped in the car and sat talking in the aircon for a little while before we left.

It turned out that this was a good thing because we’d managed to FORGET the presentation boards we’d put together for the event a few nights before.

This would have been a colossal shame – because they took us a really long time to make and we were both rather chuffed with how they turned out.

The aim was to write little bullet points of success and pepper them between pictures that showed moments of pride as well as my improved health and fitness. This meant that if I choked with my speech, dropped my my cue cards or failed to talk through everything in the allotted time that the boards would pick up the slack.

If we’d left this behind we’d have also neglected to bring my old 66in waisted trousers to emphasise how wide my bottom used to be.

Well – there are a LOT of people here. Milling about are a small army of Slimming World staff, consultants and members.

The headcount also includes a celebrity!

I have to admit I was kind of hoping that the planets would finally align and it would be Kelly Brook (sigh… Kelly…) but it wasn’t to be.

Instead it seems that something called the ‘World Cup’ is popular at the moment (football is quite niche but some of you may be familiar with it) and in honour of this they introduced ex England international John Barnes to some very excited guys and encouraged us all to line up for pictures.

I was dreading the inevitable question. I don’t have the first clue about football.

John Barnes (ex England international) smiled broadly and warmly shook my hand, looking me directly in the eye as he did so.

He enthusiastically congratulated me over my success – and then it happened.

‘Where are you from?’ John Barnes (ex England international) said.

‘Warwick’ I replied, knowing exactly what was coming next.

I didn’t have a Scooby Doo.

I said nonchalantly and John Barnes (ex England international) put his arm around me as the camera whirred into life.

The next guy in the line moved up, I shook John Barnes‘s (ex England international) hand again and shuffled off, now a bit lost in the little crowd of happy faces.

I couldn’t tell who was who. Consultants mingled with members and since all of them have themselves been on the Slimming World journey (they’re just normal people) it’s often difficult to tell who’s who. Since it was MAN of the year though I could discount the ladies – but otherwise I just couldn’t call it.

There were forty two of us in fact – according to the speech that followed my photo opportunity – all with a combined weight loss of (drum roll) FOUR HUNDRED AND TWENTY EIGHT STONE AND ONE AND A HALF POUNDS!!!!

With stats like that it’s worth remembering that every man in this photo could have had a (perfectly proportioned) wife or girlfriend with him and we’d have weighed the same as we did individually when we started our routes to health and happiness.

Once all of this was done the next thing was to move into groups of 8-9 and start the semi finals. My name was in the first group and as we were called out we all slowly filtered out of the room we were in and moved upstairs to the conference center.

As we sat in a circle (the order of our speeches was chosen at random) we took it in turns to go through what had brought us to be sitting there, at that moment in time.

I had a HUGE lump in my throat after the first guy and I was fifth out of nine.

By the time it came to me I could feel my heart racing and my mouth drying up. I took out my cue cards and the lady started her stopwatch.

My previous run throughs had come in either just on target or just over – and as I went through my points I realised that I’d slowed down. I wanted to emphasise things – but this wasn’t the time or the place.

The lady with the stopwatch indicated the four minute mark (where did all that time go?!) and out of the corner of my eye I saw Angie walking around by the judges with my boards and them pausing to look.

I only had one thing I knew I had to say so I skipped two cards ahead, hoping the bits I was missing would be covered by the pictures and words in Angie’s hands.

I’d done it, almost without my lip trembling and without crying – which honestly this material and it’s associated feelings often makes me do. There was nothing for it now but to answer a question or two from the judges and then listen to the stories of the remaining semi finalists.

I couldn’t call it.

EVERY word that I heard from these wonderful men was spoken with disarming conviction and contained obvious memories of hidden inner pain stretching back to their early childhoods.

They could have been coming out of my own mouth.

They’d seen it all. We all had.

No-one had more of a right to win than anyone else.

They all deserved the award.

By the time it was over, trembling I got up and left the room with Angie – grabbing a drink and a couple of Hi-fi bars as I passed the refreshments table. There was nothing to do now but wait until we were called back into the hall.

In the meantime we would have an hour to chat and get a (food optimised) healthy lunch. Which was great because I was completely famished! 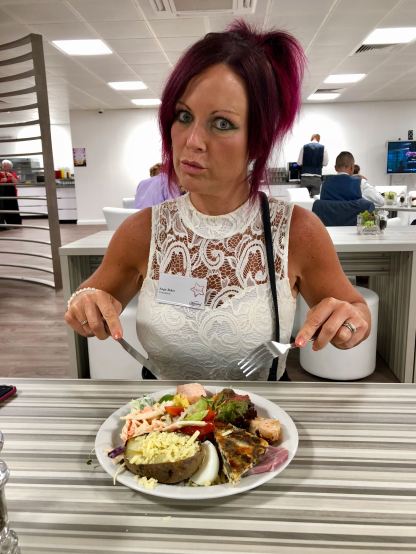 If only all canteens and restaurants were like this!!! All of the meals had syn values and everything was made the Slimming World way. The facilities were gleaming and spotless – and the staff soooooo helpful and friendly it was a pleasure to eat there.

As Angie and I chatted over this guilt free gourmet feast it seemed that neither of us had any idea which way it would go – and in fact we both had different perceptions of which ones the judges would think worthy.

I was convinced I was going home – but it really didn’t matter.

I’d come along, experienced the event and it was not the first, but the second time that Slimming World had welcomed me onto their premises and treated me like an absolute rockstar.

There was no shame in going home empty handed – not when everyone else there was a hero in their own right.

As Angie excused herself to visit the toilet I began chatting to the ladies on the table nearby. They were judges and it was clear that the choices they had to make were difficult ones.

If I’m honest I didn’t envy them. It looked like an absolutely heart wrenching set of decisions to me and I wasn’t responsible for the task.

I tried to aimlessly natter as best I could – but by this point I was so tired I wasn’t even sure that what was coming out of my mouth made sense. The only thing keeping me going was the endless supply of fresh coffee in the canteen – and BOY was I making spirited use of it.

Then the call came. It was time for everyone to head back upstairs….

But that dear reader is (for the time being) where this story pauses – because Slimming World have asked that the participants in the Man of the Year competition do not reveal in public or on social media who the winner was so that it preserves the special plans they have for him.

So – far be it from me to spoil the event in advance – and you have my apologies for the cliffhanger.