It’s next to impossible to not be carried away with the peaceful and easy feeling that the current spell of warm weather has brought to the UK.

Recently Scotland recorded the hottest day in its history (link) which was measured at a scorching 33.2C degrees in Motherwell, North Lanarkshire, and the forecast for Warwickshire is similarly toasty for the next week or so ahead.

To use a well trodden phrase I’m ‘making hay while the sun shines’ and getting the most I possibly can of my usual twalking companions’ willingness to get out and about and my own desire to enjoy the outdoors plus (when necessary) de-stress.

Usually I count my walking weeks (and work toward my 70 mile objective) from Saturday to Friday – and already I have enough in the bank to take my foot off the gas a bit, but so far I don’t feel the need, because I’m just loving life. 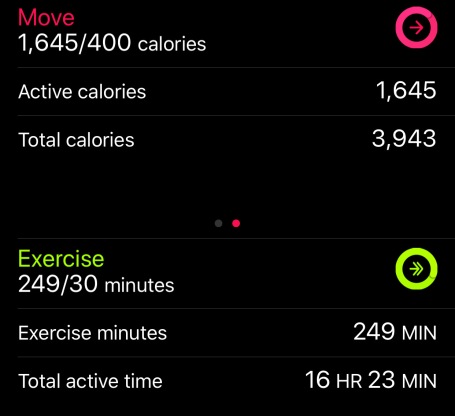 Every day currently just seems to come pre-loaded with a reason to bounce out of bed. Most days have seen me begin a little early and take a longer route than I actually need to so that I can make the most of the world while it looks so beautiful. 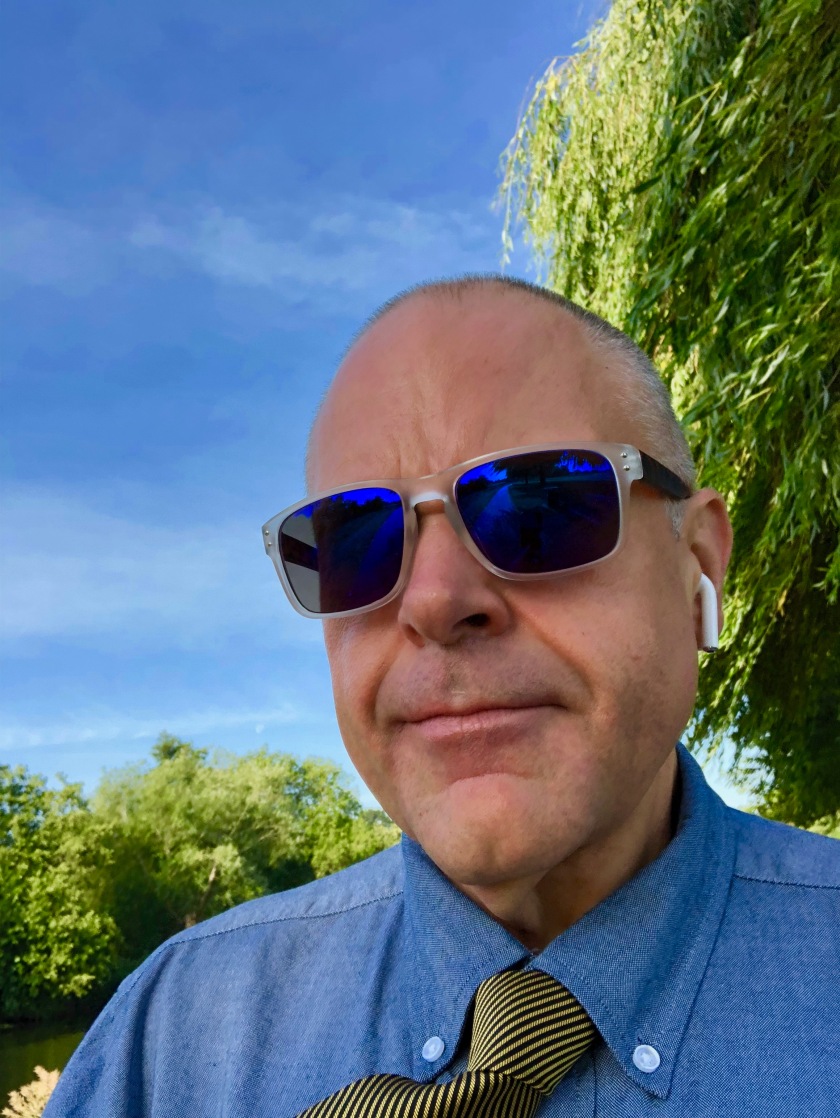 A reader asked me recently some practical questions about walking to work (in an attempt I assume to replicate my behaviour) and queried what I do about sweating, ‘beetroot face’ and the need to shower after doing so much exercise.

You may notice in the photo above the sun is shining and I’m wearing noting but a dangerously light coloured blue cotton shirt.

Truthfully this used to be a big consideration – and in the job I had before this current one (when I was a little heavier) this was a daily concern.

I’d already lost a lot of weight and in August 2017 I had started walking to work (two miles each way in that case) for the first time (link).

I remember being quite paranoid about how i’d look when I arrived in the office and was wearing a white tee-shirt under all of my shirts to soak up any sweat if it happened. At that point I was four stone heavier than I am now (12th August 2017 – 18st 8lbs) but still pretty proud of where I’d managed to get to in terms of fitness and put some before and after photos in my blog. 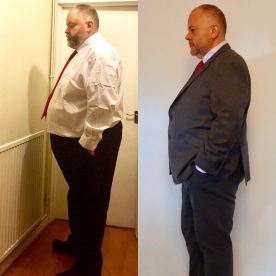 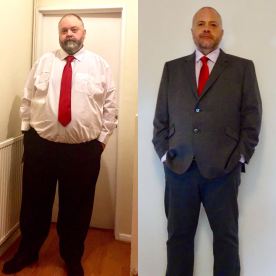 ‘Beetroot face’ is something that stopped happening (I don’t remember exactly when) but from memory this wasn’t something directly related to weight – but increased fitness.

I guess in answer to the reader’s query I should say ‘if you need to take spare clothes and shower and/or change at work then do it. If you’re worried about looking hot and sweaty then just remember the embarrassment is in your mind – not other people’s.

I know only too well that random passers by can be spontaneously and surprisingly cruel (link) (more links) but when it comes to the people that know you all they’ll see is someone trying to better themselves and they’ll be supportive and encouraging.

If not then you work with assholes and it’s time to find a new job.

It’s as simple as that.

Your goal (as difficult as this can be) is to have a better life and to be healthy and happy. To reach that point you don’t need to look good or impress people with how effortless it is because it’s not.

It’s flipping hard and I take my hat off to anyone trying to convert sedentary fat into muscular fitness because it’s not an easy path to take.

It is however the right one  and over time it gets easier – so keep going.

If you do then everything opens up – and in my case the flower that blossoms is literal as well as metaphorical. While you’re out and about you get to see not only yourself but the world around you growing.

Yesterday evening I was finally able once again to do a full circuit  (around 3.5 miles) of the golf course at Leek Wootton with my friend. 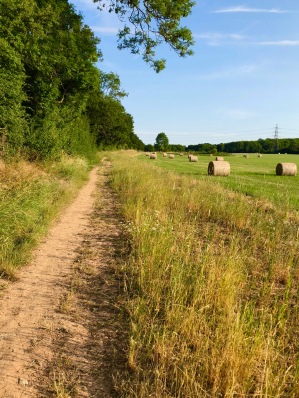 Regular readers may remember my companion as a lady with a poorly paw. Not so long ago this regular partner in crime of mine took a tumble whilst we were twalking in the Hickey Hills back in March (link).

For a few weeks now (since she got the OK from her doctor) we’ve been taking baby steps on flat surfaces in order to try and build up her capabilities again. Now I’m glad to report that she’s getting to the point where uneven surfaces and some gentler gradients are once again possible.

There’s been a lot of frustration on her part associated with the length of time that the injury has taken to heal – but honestly I’m amazed that it’s done as well as it has, given that ‘a ligament tear’ actually turned out to be ‘a ligament that pulled a chunk of bone away with it too when it tore’.

But now we’re out and about again – and what a time it is to be doing it! 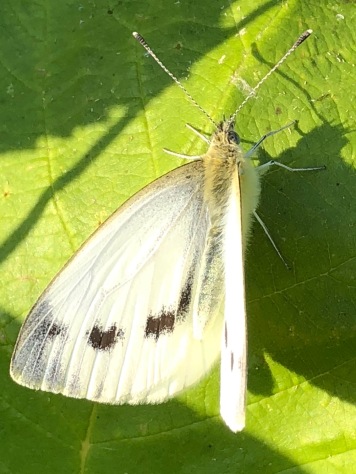 Yesterday everywhere seemed to be heavily populated with butterflies and moths. No matter where you walked the hedgerows were thick with the Red Admiral and Cabbage White varieties.

Even before I’d started the twalk, sitting on my recycling bin when I returned home was this little guy. 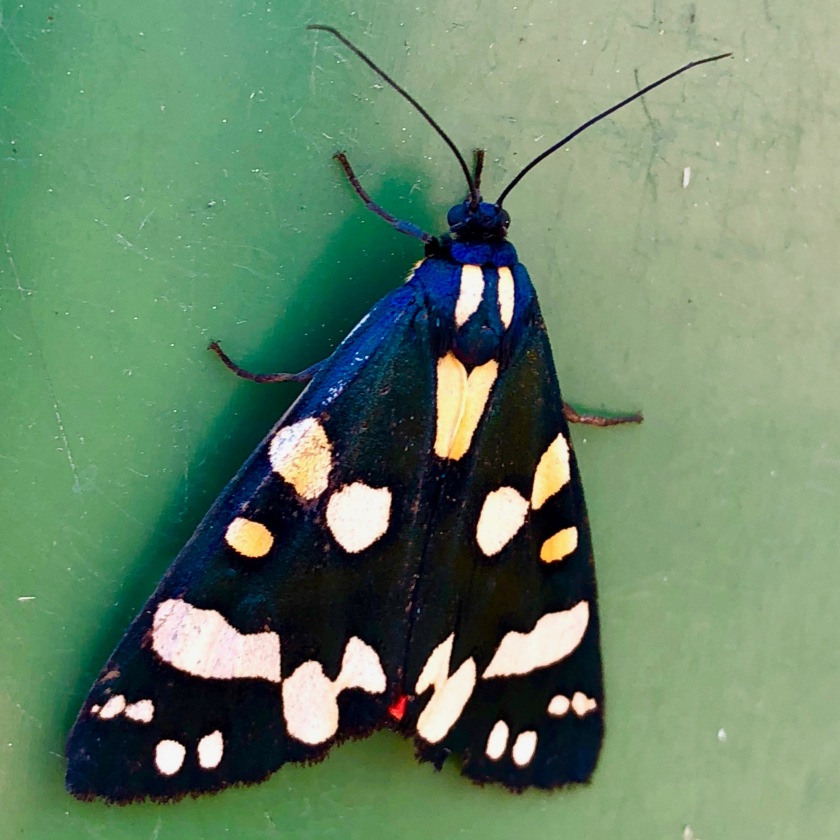 I’m seeing a few varieties this year that I’ve never noticed before – and the milder weather may well be the cause – because while I was looking this up (it’s a Scarlet Tiger – link) I realised it’s predominantly found in the southern parts of the UK.

Hopefully I’ll find more as the weeks go on – because I’m just loving blundering into these little guys!

Who knew moths could be so vibrant and colourful? I’ve only ever noticed the irritating little brown ones fixated on lightbulbs before and these couldn’t be further apart if they tried!

Anyway – I better get on internet. I have another busy day ahead of me.

Whatever you’re trying to do to improve yourself – keep doing it – and to anyone reading that feels like they’re approaching the deep end – just keep swimming!