I hadn’t intended today to be a trip down memory lane – but quite unexpectedly it was.

My regular twalking buddy had suggested that we go for a walk around Symonds Yat after she’d been exploring there herself recently – and since I’m no longer one to pass up an opportunity for a walk in the countryside I eagerly agreed.

I’d never been there before and it seemed like a really good opportunity to explore.

I picked her up at 7am and since the roads were extremely quiet we made very good time. As we drew closer to our destination (by now it was around 8.30am and quite deserted) I found myself surveying the surroundings with an ever increasing sense of deja vu – but I couldn’t quite put my finger on exactly why.

Ignoring this we parked up, paid and displayed and had a look at the available trails.

The longest yellow one ‘The Highmeadow Trail’ seemed to be the one to go for. It appeared to take in some really nice views along it’s rather meandering 11 mile route – and at five hours with plenty of gradients also appeared to be capable of giving us a good workout.

We started out at the top of the visitor’s car park and headed for the nearby cafe and it’s viewpoint across the River Wye – which from a geological perspective is rather interesting. 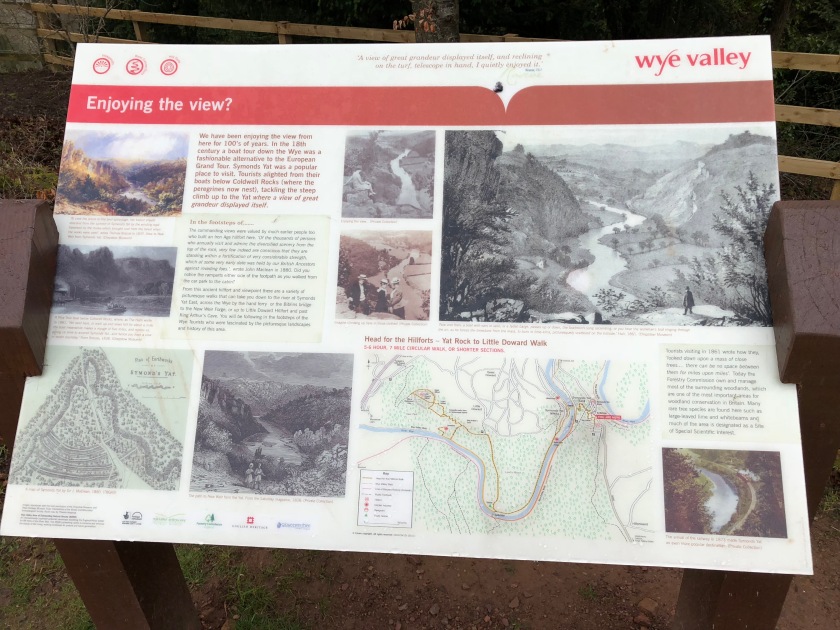 Although it was cloudy for pretty much the whole day today the rain mostly held off – and the absolute worst we experienced was a fine drizzly mist.

This made the view a bit hazy – but no less wonderful.

It’s a truly lovey place to stand and soak in the scenery!

I couldn’t help wondering what it would look like on  realy nice sunny day with some blue skies to compliment this rather wonderful view of the valley and it’s meandering waterway stretching into the distance.

We both agreed we needed to come back on a better day. This has to to be experienced at its best!

After a couple of pics we headed off down the trail and immediately we came to the conclusion that the going underfoot was going to be pretty treacherous today.

Although initially most of the paths were well maintained they were all extremely damp – and it was clear that several days of rain had not made for the best underfoot conditions. Almost all areas with any kind of gradient could truthfully be described as ‘ex-waterfalls’.

As we continued downhill to the Wye I looked closer at a photo of the map in the car park that I’d taken earlier. 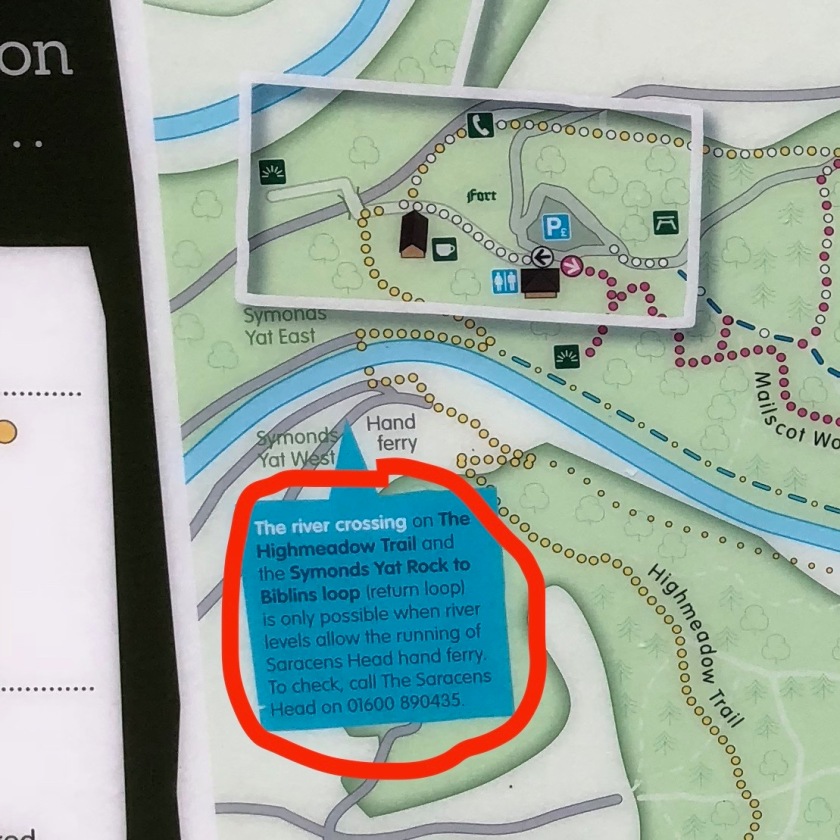 When we reached the river it didn’t seem like it was short of a few gallons..

Somewhat unsurprisingly therefore, when we arrived at the hand ferry there was a large sign proclaiming that it was cancelled until further notice.

Undeterred by the setback we decided instead to double back and continue following the river before we picked the trail up elsewhere.

After all – how hard could it be?

I had OS maps on my phone and it shouldn’t be that difficult to follow a waymarked trail with the aid of GPS.

I was blissfully unaware of this distant and unwitting sabotage however as my companion and I happily made our way along the riverside chatting away and just soaking up the fresh air and moist atmosphere.

No-matter how much I was enjoying the company though I was really getting a sense that I’d been here before. I just couldn’t shake it at all – and it was only as we rounded the bend of the river to a physical bridge and started walking over it to have a look at the view (and take a shameless selfie) that I realised ‘Wye‘ (pun intended.)

Looming large there was suddenly a memory from my past – which I have no idea how I managed to forget.

I’d stood on this exact spot before – and what’s more at home I had some of the few remaining photos of me as a younger man at the tender age of 27 during a brief camping trip in the area (which I ferreted around and found this evening). 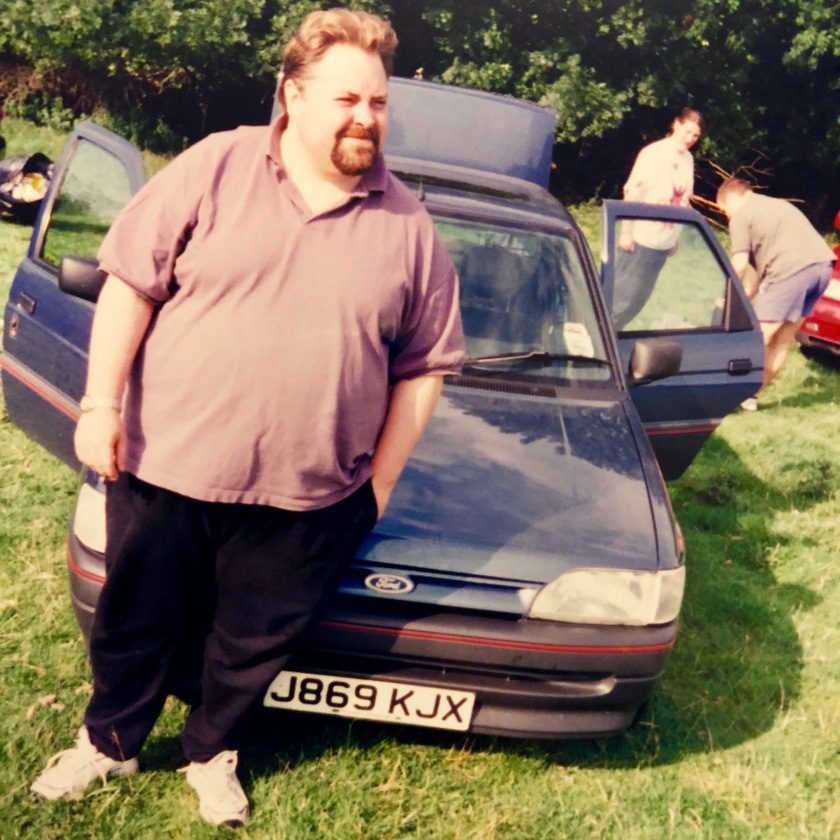 I’d been with a group of friends and had walked with them to a nearby pub for dinner. When we did we’d passed over the bridge and then walked together along the river.

I remember this at the time being a rather exhausting and uncomfortable stroll on what was a rather warm day.

Honestly – although I enjoyed the company and spending time with friends I don’t remember enjoying being there at all (even though it was undeniably pretty) and from memory I had a real sense of reluctance when it came to going anywhere that day.

I had my usual back pain if I remember correctly (my stomach made this something that was continual even back then) and just wanted to get back to the car and go home. I was so eager to go that I never registered the name of the place I’d visited and frankly was just happy to leave.

Today though I was in a much better frame of mind and just wanted to explore.

Forgetting old memories we headed back along the path and took one of the branching signposted paths that we thought would take us the right way.

I have no idea how we managed to do it – but for around two hours we clambered through mud and bracken, climbing up and down gullies and slopes (stopping briefly to take a picture at the oddly named and innuendo laden suck stone – which must have launched a million suggestive chat up lines) and ultimately got completely lost. 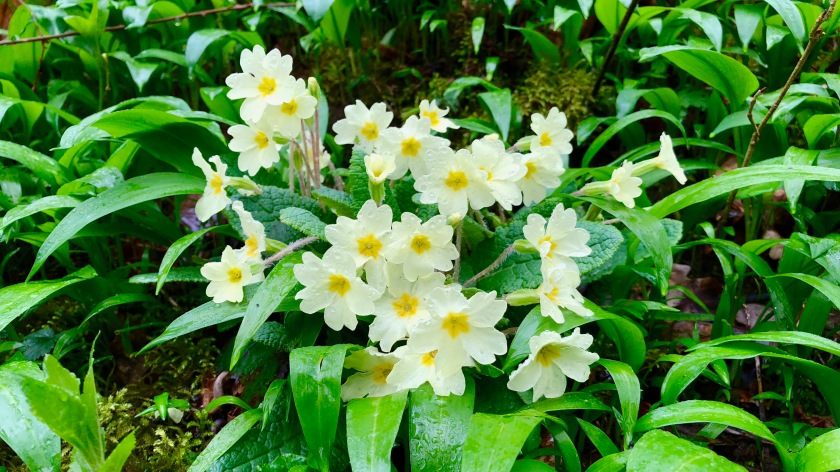 After a rather picturesque but also slightly boggy traversal of some woodland we realised that we’d emerged (at around midday) EXACTLY BACK WHERE WE STARTED. By this time we were both a bit hungry and decided to make our way back down the river and eat our packed lunches at a picnic bench overlooking the Wye. 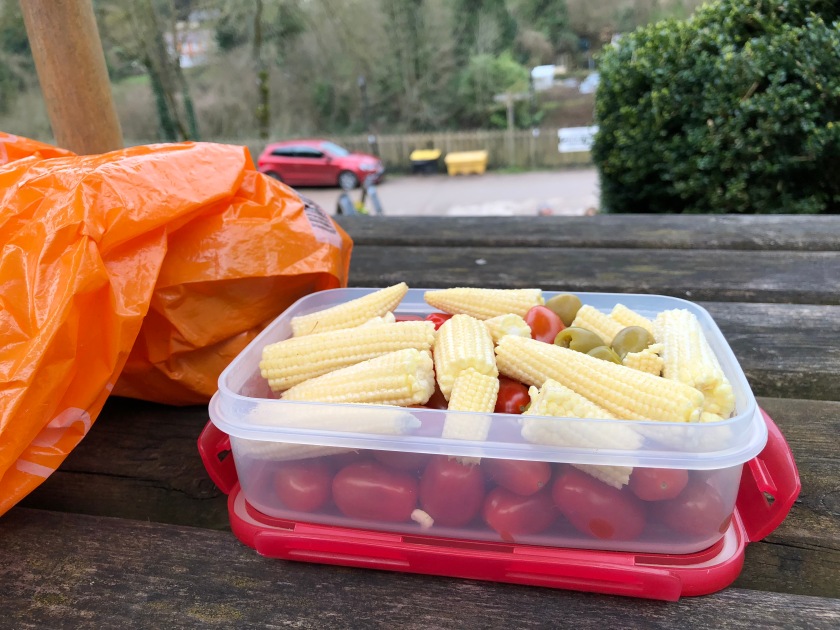 I have to say though internet – despite getting a little turned around in the woods we both thoroughly enjoyed the day.

It’s so often the case that the days where things don’t go quite to plan, and you end up a little off the beaten track (or off piste as my chocolate enhanced friend would say when we’re trying to figure out where the hell we are) are the days that you remember as jolly good fun.

Throughout we talked, laughed, nattered, gossiped and just set the world to rights as we made our way enthusiastically through puddles and undergrowth.

It was a grand day out internet – and one that I thoroughly enjoyed!

We’ll be going back and no mistake. Hopefully next time there may also be a vague odour of chocolate in the air…