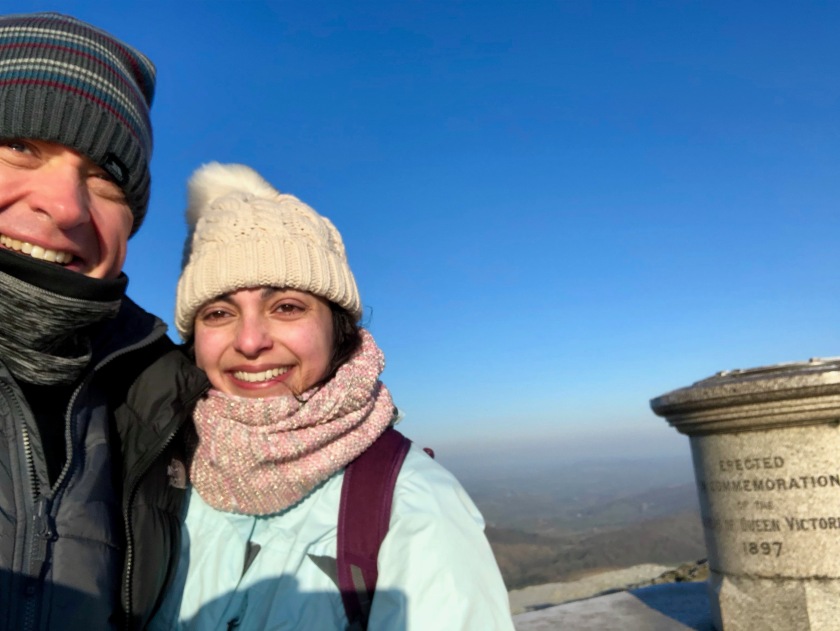 It’s 5am on Sunday, my alarm has just gone off and I’m tired. REALLY TIRED. I can lay the blame at the feet of temporary insomnia – which usually only occurs before Saturday but absolutely never usually happens after Saturday.

The truth of it is though that this broken sleep comes without my usual twin helpers (stress over weight loss or over indulgence in caffeine) and is clearly attributable to something else.

I’ve been waking up over and over because I feel deliriously happy.

Yesterday I became a target member at Slimming World and I’m buzzing.

So – despite feeling totally shattered I’m in a really good mood. My friend is picking me up shortly and we are going to walk the length of the Malvern hills and back again today. 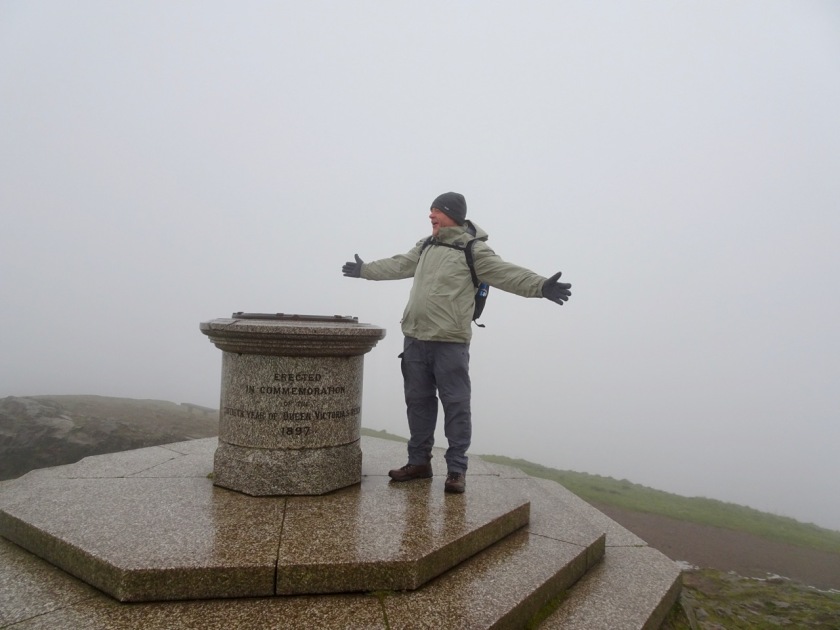 Both times we’ve been together before the weather turned out to be awful – and she’s never managed to get see beautiful blue skies you can get there combined with the practically endless views that I have in the past – but today the forecast looks rosy and I have high hopes.

We’re both fit and are definitely capable of doing the full end to end challenge in the right weather. If we’re lucky it will be windy but bright and clear and we won’t be found frozen to the fossil of a cow by archeologists in a thousand years or so…. 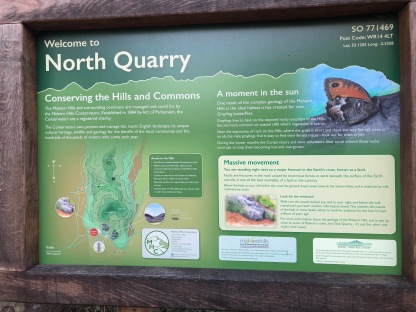 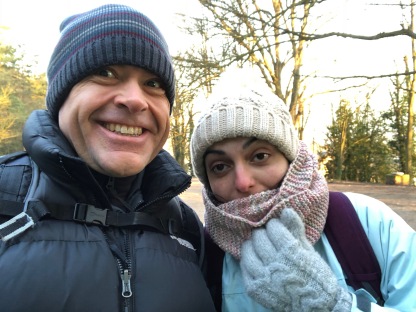 Well we go here in good time and parked up near the North Quarry car park – which I’ve never been to before. We checked the map quickly and then headed up the nearby dirt track to the top of the first hill.

Although everything was thawing nicely down in the town below, up on the hills the wind chill factor was epic. Pretty much everything around us was frozen solid – and the puddles we found here and there were thick, rock hard sheets of ice.

There’s no denying it though – this type of environment is where I now feel most at home and complete. It just makes me feel at one with the world and it’s where I always want to be. I don’t care if it’s windy, raining or snowing. I just love being here.

In a relatively short space of time (not long after 8am) we’d reached the commemorative monument at the highest point of the hills.

The scenery looked fabulous – but it blowing a gale that made the camera impossible to hold straight and it was hellishly cold!!!

We headed off with our objective barely visible in the distance – and were going at a good pace. This didn’t seem tough in the least – and when you have a companion that conversation is easy with time just flies. After much spirited twalking we’d quickly reached the British Camp car park for a rest stop.

By this point I was really in need of some nourishment (breakfast actually!) and a coffee to warm up. 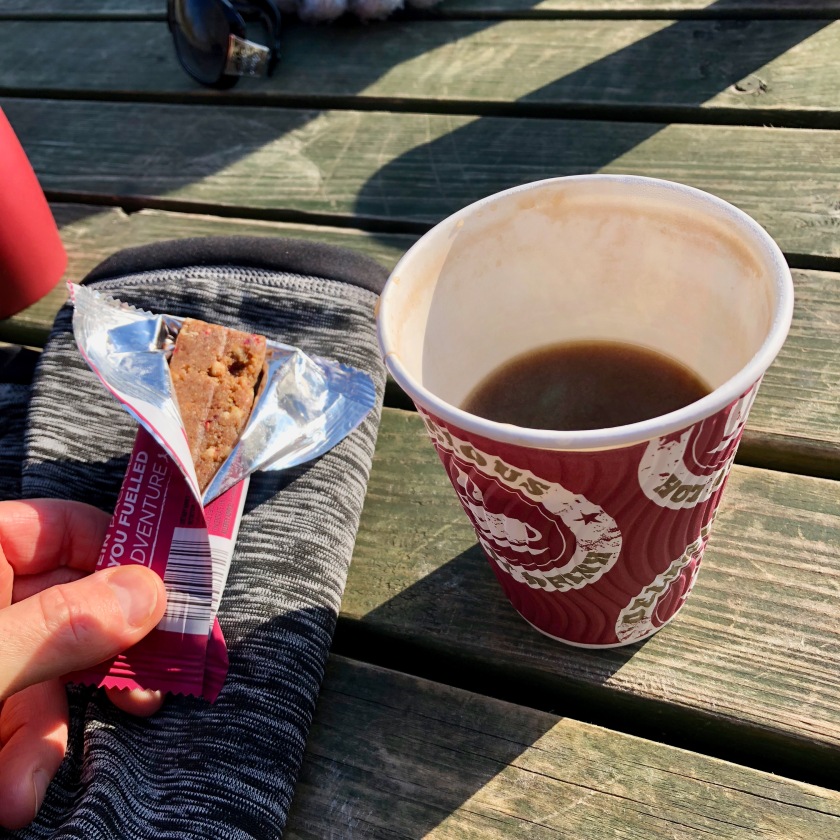 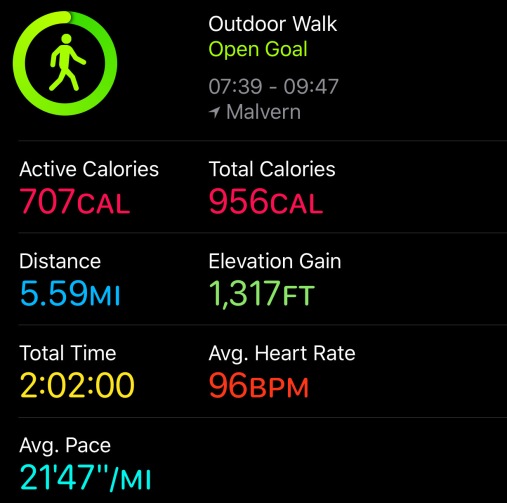 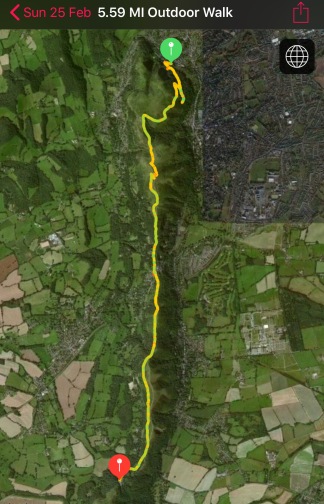 It was here that one of the tamest robins I’ve ever met decided to come and say hello – and perched on the bench behind me sitting so ridiculously still that I managed to slooooooowly get my camera out of my rucksack and take a great little zoom photo of him.

He just sat watching us quizzically the whole time!

After moving around beside us for a while he then hopped under the table to have a root around by my feet too!

Once this cute little guy had finished rooting around and flown off we finished taking on board some sustenance and headed up the hill by the British Camp car park with our sights on Midsummer Mount and its monument in the distance.

As we climbed I couldn’t help but sell my companion on the majesty of the Giant’s cave – which she had never seen. I asked whether she was ok with the dark and capable of going into an extensive underground complex without getting lost.

She assured me that she was capable of functioning in even the most extreme environment. I needn’t be worried, she reassured me. She was sure she’d be OK. 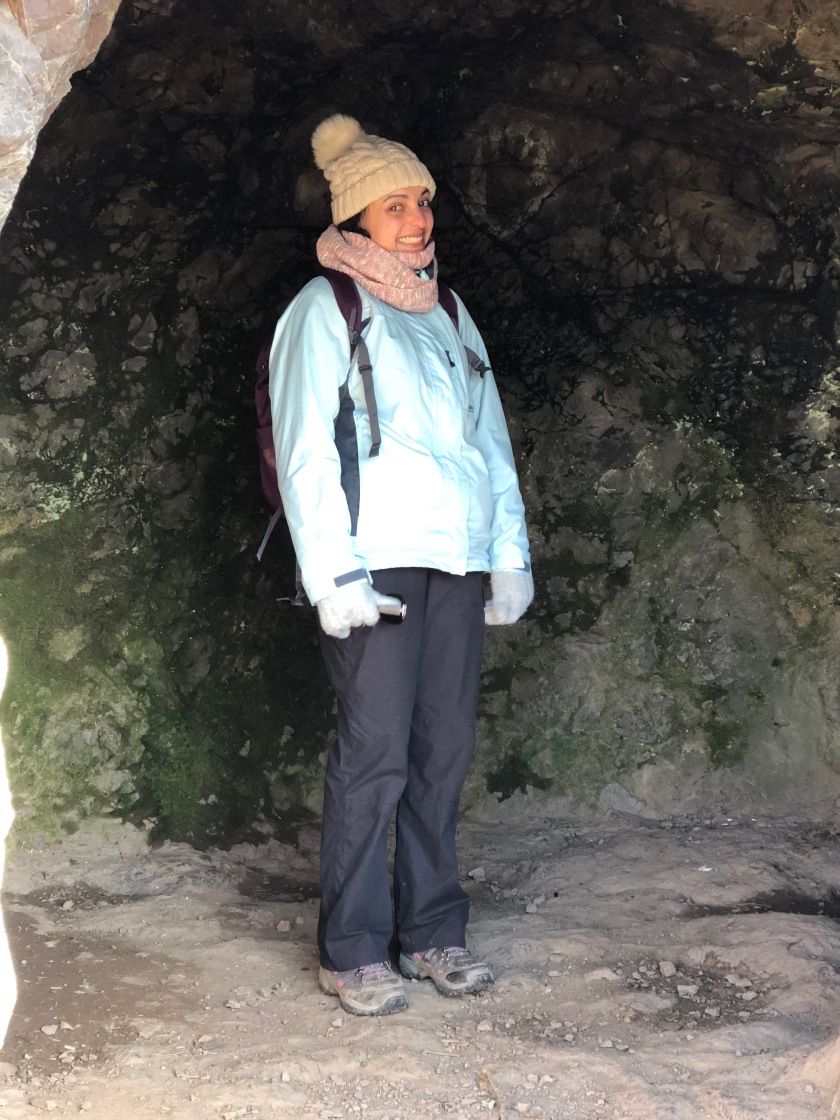 After she recovered from the experience of the underground wonderland that I’d presented her with we made tracks. We were soon at the needle – which has clearly seen better days.

At this point we’d done half of the distance we’d planned for the day – and the next task was lunch. After popping on a preventative plaster or two (you have to ensure you don’t needlessly get blisters!) We headed back towards the British Camp car park for a hot dinner and a sit down – one again making good time!

The sky was a wonderful azure blue and the view (although a little hazy) looked incredible.

In the pub I decided to have a baked potato (the butter was left on the plate) and some seasonal vegetables – which really hit the spot. 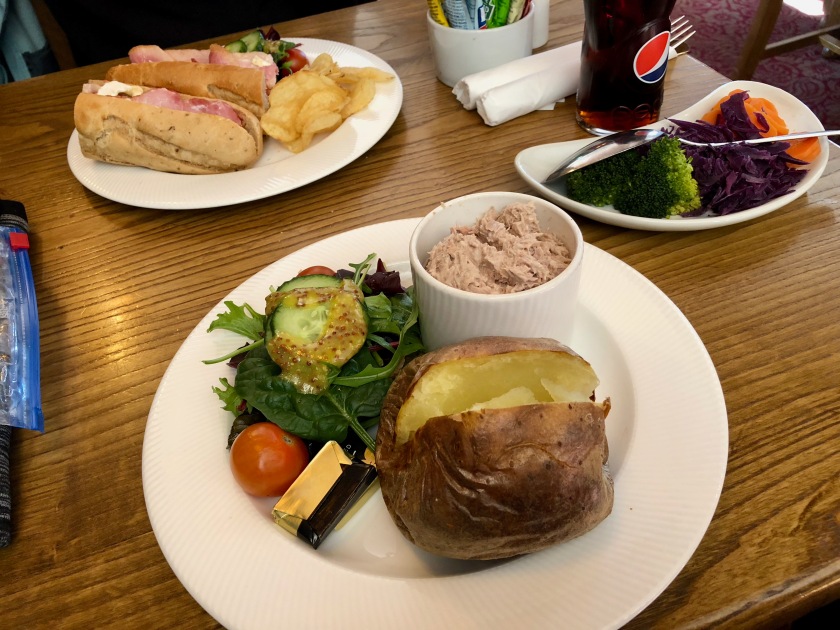 It was at this point however that I realised I’d managed to catch some sunburn on both my hands and face.

Despite it being largely freezing I’d suddenly noticed I was intensely itchy and had completely neglected to put any suncream in my rucksack. Thankfully my companion came well prepared and I liberally smothered myself with some of hers while we sat chatting.

After around an hour of talking, eating and drinking coffee we headed to the nearby roadside cafe where I filled up my flask with a nice hot Americano and we made tracks for the car.

Although much had begun to thaw on the top of the hills the wind was still bitterly cold and I was amazingly glad that I’d brought my gaiter along for the trek. It came in really useful – although made talking next to impossible! How the hell Spider-Man manages is totally beyond me!!!

Our next brief stop was at the loo – and there’s a really nice little covered seating area just outside where you can stop for a breather and sip coffee without fear of being battered by the elements.

After a brief rest we powered on for the last leg of the journey enjoying the views as we twalked. It was a great day to see miles and miles into the distance, and although it wasn’t the clearest day I’ve seen there, it was still pretty darned great.

Before long we were back at the car, and feeling suitably tired! It wasn’t the longest walk that I’ve done – or even the highest that I’ve climbed in one day – but this was something a bit different to me.

This was the fifth time that I’ve travelled to Malvern for walking since I began getting fit and pushing my limits.

When I first came here I was getting fitter – and working towards climbing Snowdon – but still had a long way to go (link). I couldn’t do the whole end to end distance at the time (not even close) and at 22st 4lbs, although I’d lost over 12st by that point I looked a lot different.

I also suffered a lot the day after. 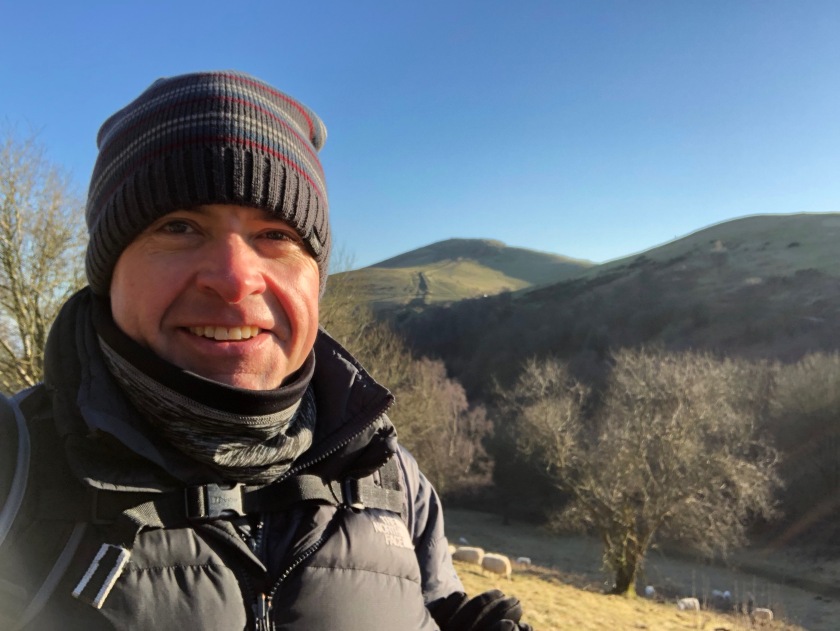 In contrast today (it’s now Monday – I flaked out yesterday shortly after having some food when I got home) I feel just fine – and we did it. We walked the whole thing in a day! 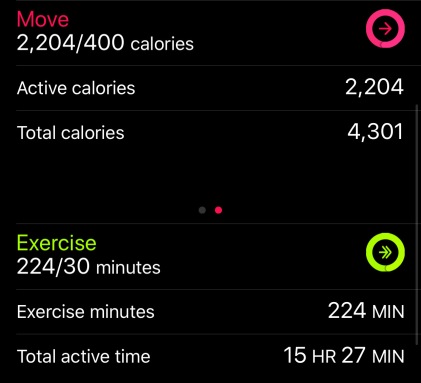 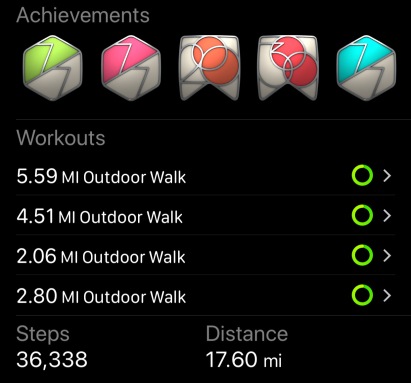 Life is better when you twalk.

Life is even better when you twalk with great friends in a wonderful place on a fantastically sunny day doing something you absolutely love doing.

(although my hands and face are REALLY itchy!!!)