It’s Christmas Eve. I’m lying in bed and my eyes are burning. They’re itchy and uncomfortable from tiredness mostly – and I suspect that this is because I drank waaaaaay too much coffee yesterday.

I think it was my way of celebrating my weight loss – but also (since it’s my last remaining vice) also my way of being naughty. Everyone needs something to make them feel decadent!

I think I’ve probably only had about two hours sleep. Last night was spent talking with my friend whilst wrapping our remaining presents (there were loads!!!) until around 1.30am (which is way past my usual bedtime).

Prior to this we’d gone out for a walk into Warwick and stopped for a Chicken Caesar salad at a little homely Italian restaurant called Piccolino’s just by the castle. I’ve never been there before – but I have to say it was really nice food and a surprisingly large meal for the price.

It’s a testament to the quality of the food that I forgot to take my obligatory blog photo – so for that I apologise!

(Author has to get up, go to visit his family to exchange presents, walk into Leamington and back home again, before eating dinner of sorts – which mostly consists of lots of apples – and then annoyingly falling asleep at around 2pm, finally awaking at 9pm on Christmas Eve with the day virtually over.)

As I sit trying to complete this post (because I started so therefore I must finish) and wiping the sleep from my eyes with very little to show for the day something occurs to me.

What did I look like during other Christmases past?

It’s actually a little sad to begin with if I’m honest because despite some of the smiles I know how uncomfortable (both physically and emotionally) I felt when most of these were taken. Many of them I’m quite drunk in – which also takes me back to a big part of my life I’d like to forget.

The first is taken in 2003 at a work Christmas Party – wearing (from memory) a 6XL shirt. 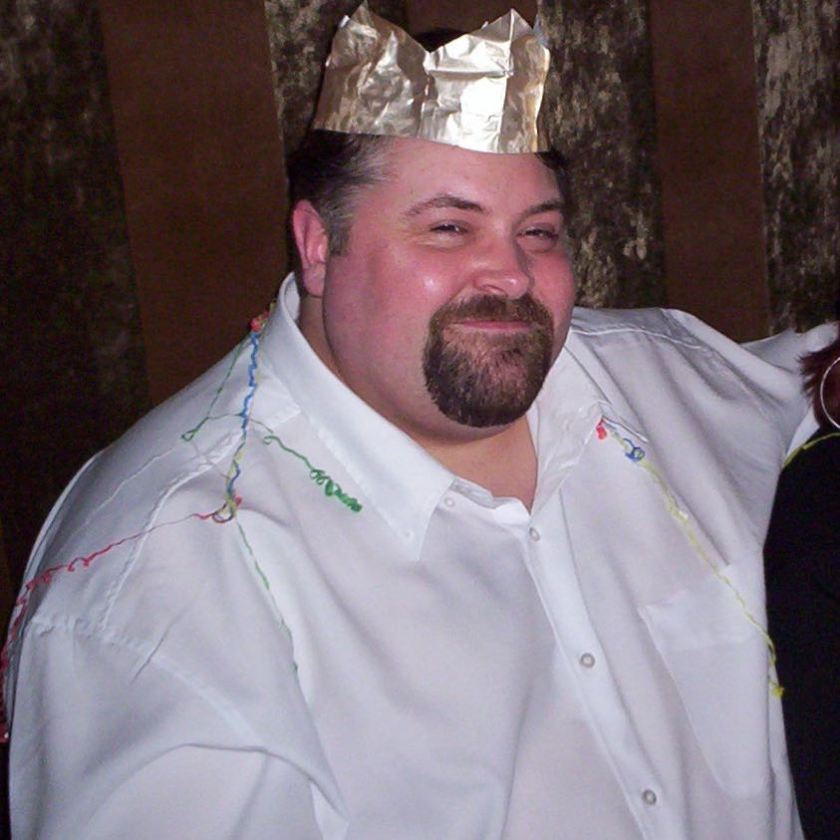 December 2009 – I didn’t go to the Christmas party that year, although I cant remember why. I have no idea of the polo shirt size I’m in (I think it’s 7XL) but I know I look special in my 3D glasses… 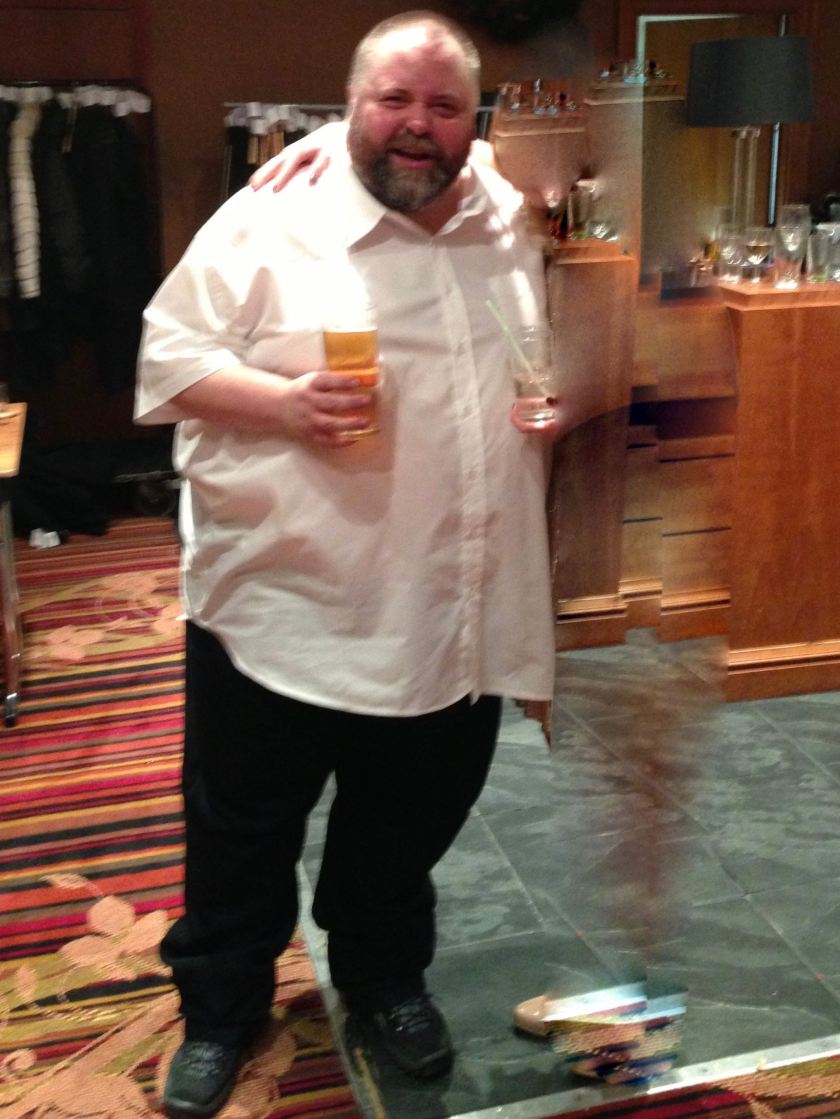 December 2014 – at my friend’s wedding – and now in the 8XL shirt that features so often in my ‘before’ photo comparisons. It’s my largest item of upper body clothing and I’m forced to wear it both to work and on special occasions. 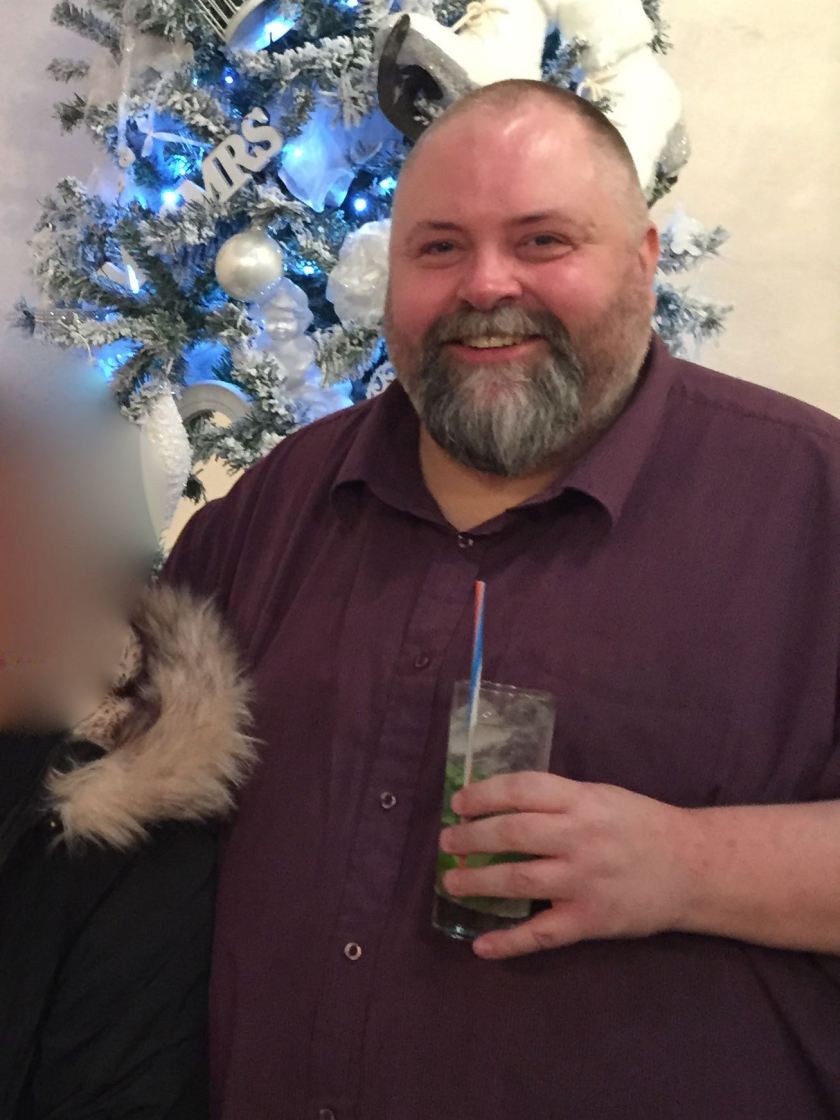 December 2015 – at my lowest ebb and getting more and more immobile. I’m no longer getting out and about. I’m rooted to my armchair and wearing a huge tracksuit with lots of give in the waistband.

It hurts just to just sit still in my armchair – which is often where I’ve been forced to sleep because I can’t breathe lying down. I have begun regularly drinking until I pass out – to numb both physical and emotional pain – which I was doing at the time I took this picture.

December 2016 – I’ve been sober for approximately eleven months and at Slimming World for eight months. I’m now beginning to see lots of changes. I’ve lost over nine stone and I’m thinking about going to job interviews in the future.I’m back down to a 5XL shirt and have made some good progress.

I still hate how I look with my shirt tucked into trousers – with good reason. However I’m walking as much as I can and feeling much better.

Finally we get a little more up to date.

It’s December 2017. I’m wearing an XL Christmas jumper, 38in waist trousers (they’re loose – and need a belt in this photo).

I think I look genuinely happy and I know it’s because I have my life back.

I guess that the point of this little trip down memory lane isn’t so much about torturing myself over why I didn’t do something sooner or how I got so low and so incapable of looking after myself.

It’s to show that in a relatively short space of time, when I decided to be different that I was capable of making great strides – and more of them than I ever believed were possible. It shows that whatever your ghosts of Christmas past are that they don’t have to define you – and that you don’t have to remain trapped in the same paradigms year after year.

Someone asked me recently how I managed to bear being incapacitated for so long – and truthfully a human being can get used to a lot.

None of it happened overnight, and much of it crept up slowly over a period of many many years as I self medicated emotional pain away with one substance or another. I barely noticed as one by one things became difficult or even impossible to do – until at the age of 42 I was practically housebound and weighed around 35 stone.

Downstairs I have gifts waiting to be unwrapped under my tree.

It’s the first Christmas tree of my adult life as many of you know – and it’s all the more special because of one little cardboard bauble sitting in it’s branches.

Hopefully soon I’ll be at my target weight and then the real battle begins, because losing 20 stone (as proud as I am of what I’ve done so far) is only part of the picture.

In many respects after almost two years of rebuilding my life I’m just back to where everyone else is. The next phase is to continue to build a different me. One that’s continually improving and evolving – not just physically but mentally too.

This is a version of me that doesn’t sit still for long ever again, and strives to be better in some way shape or form every single day.

I wonder where Christmas 2018’s photo will be taken and what I’ll be doing? I hope you join me in a year to find out internet – because I for one can’t wait to find out!