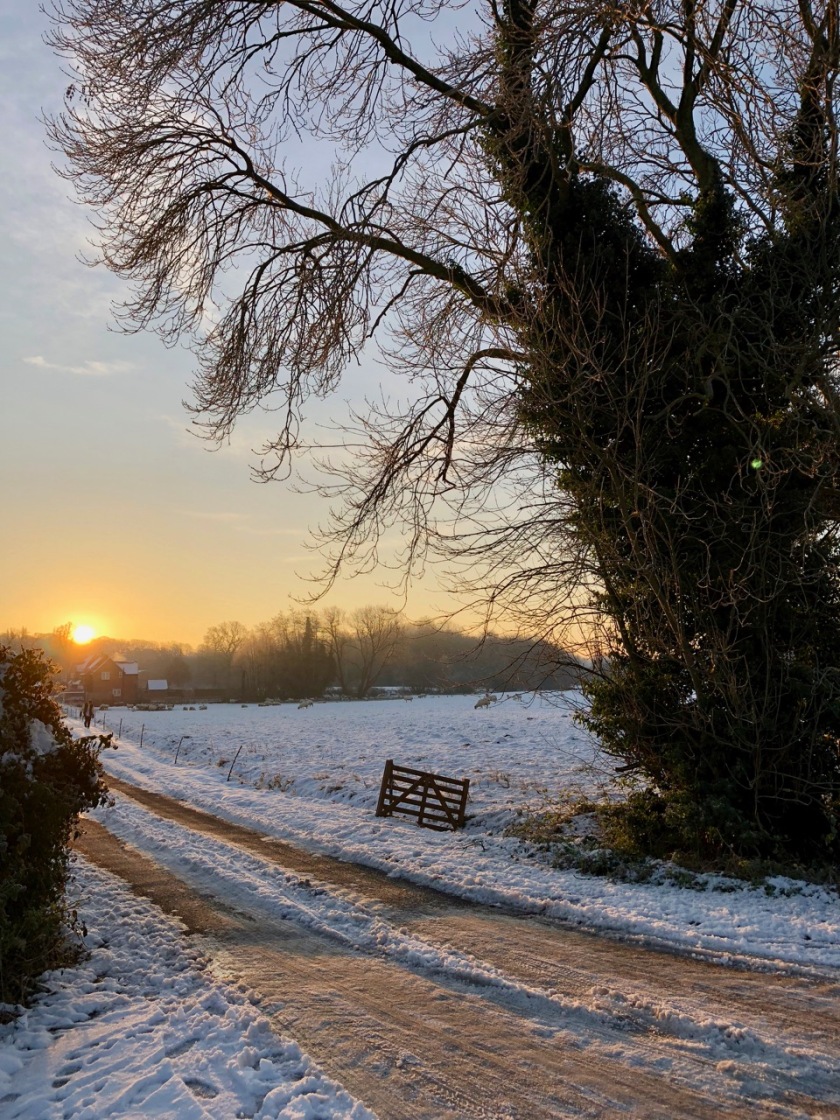 Being good is a tough sell sometimes and today I really didn’t want to play ball.

I’ve picked up a bug of some kind – and whilst the person who I suspect I caught it off seemed to have been hit with a viral apocalypse (she was virtually at death’s door last week in the office) I’ve just felt cumulatively more achey and crappy each day for a few days.

It doesn’t help that the world is frozen solid at the moment – and because of this yesterday I took the unprecedented step of driving to work.

I know I know. I feel dirty just saying it.

The words drive to work should be outlawed – but nevertheless when faced with the appallingly icy pavements of Warwickshire and the largely clear roads yesterday I decided to take the easy option.

If the truth be told I regretted it immediately – because I just spent the rest of the day stressing about my exercise stats. When I finally came home I engaged in a less than pleasurable session on my exercise bike to try and plug the gap – but doing this whilst feeling achy and run down was just trying to hammer a square cycling peg into my round walking hole.

It just didn’t feel right – and I really missed my usual morning and evening constitutional.

To make up for this I decided to set out extra early today to compensate for being a bit slower and grab some Lemsips on the way. 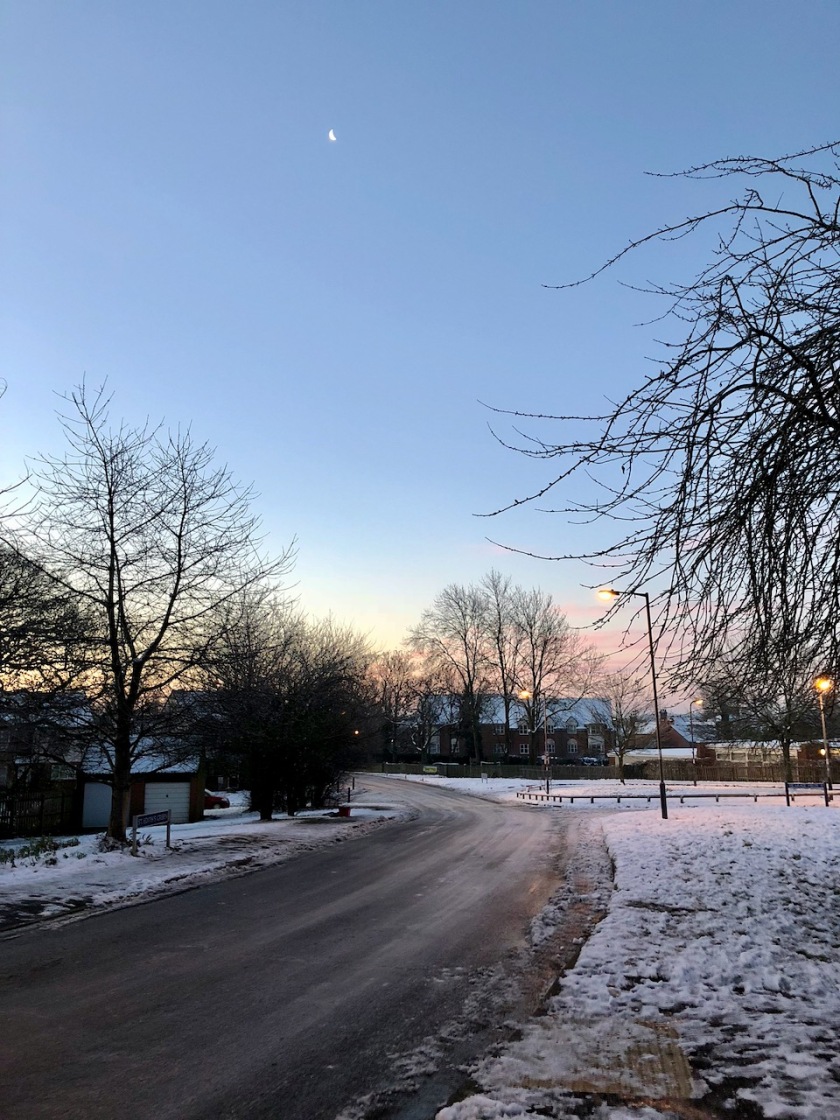 The moon was still clearly visible in the clear blue sky as I left the house – and everything felt extremely crisp and crunchy underfoot.

It’s at times like this that I’m really really glad that (in order to remain both comfortable and active) I’ve invested in some really good footwear, thermal socks, Supercoat 2, base layers, heavy winter gloves, a neck and face warmer and a seriously cosy Thinsulate wooly hat.

However – regardless of all of my cladding and insulation my head was still pounding, my nose still running and my limbs still aching. I really needed some kind of cold remedy and fast.

Irritatingly by the time I’d arrived at the Sainsburys local (a mile down the road) I realised I’d forgotten my wallet. To add further insult to injury I’d failed to re-seal my flask of coffee after drinking from it along the way and it had leaked over everything in my bag.

Part of me started to slip into Davey’s grumpy cat mode.

That is – until the universe, impressed by my willingness to walk in all weathers despite the fact that I was feeling like a sack of crap decided to reward me with a bean.

The world is full of shocking litter bugs. How can people just sling their rubbish on the floor all the time? Thankfully it makes me happy that (like a human Womble) I find what they leave behind, make good use of it and tidy up as I go. 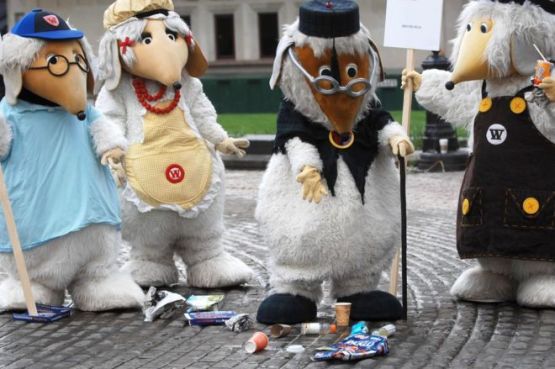 Who am I to complain if it means I keep getting little stickers entitling me to free coffee for my efforts?

It’s becoming something of an addiction to pick up and dispose of other people’s rubbish and in doing so I’m taking a real pride in where I live. The only thing that completely eludes me is how everyone thinks it’s ok to just throw their crap on the floor when they’ve finished with it.

Luckily the universe had my back and Sainsburys accepts ApplePay – so after waving my Apple Watch at the till I walked out with some hot lemon powders and cold and flu tablets.

After taking a couple of these I slowly began to feel a bit more human and continued on my way – skating and sliding around on some of the frankly treacherous pavements – which unlike the completely clear roads are deadly if you’re not paying attention.

The extra focus required is a good thing though.

It’s impossible not to feel awake when you need to get to work on time as well as not break your neck in the process – and while you’re intently paying attention to every shiny crack in the pavement you soon realise that you definitely feel more awake and alive.

Plus when the sky’s as clear as it was this morning it’s hard not to be entranced by the little details along the way. I can’t help but stop sometimes and admire my favourite little bits of my route.

It looks absolutely delightful whatever the weather. 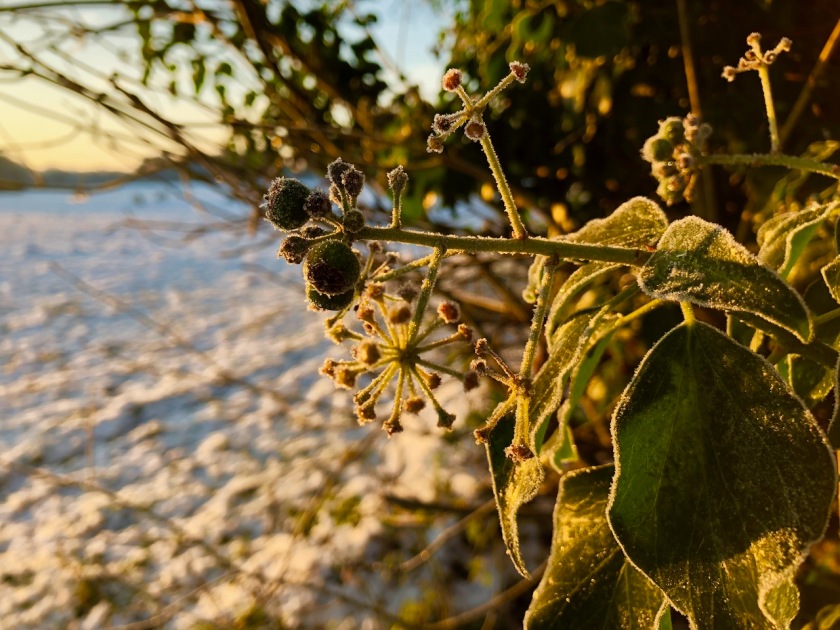 So, I could have taken the car. I could have sat in air conditioned warmth, and I could have arrived having spent another hour in bed – but where’s the pleasure in that? I know for a fact that I’ve burned a nice chunk of calories – and that I felt better for doing so.

I still feel like utter doo-doo tonight, but I’m convinced that whatever this is would have hit me way harder if I wasn’t so intent on keeping fit and active. I’m convinced it makes the difference between just crawling into bed to die and carrying on regardless.

However – I’m still having an early night tonight. That’s just a given.