There are many things to be thankful for.

If you think positively then the universe often provides – and sometimes way more generously than even I expect. I’m a great believer in thinking that the best will happen, because I find that quite often it does.

For instance – you’ll never hear me say ‘call me when you get back’ or ‘drive safely’.

This isn’t because I want someone to meet a brick wall on the way home or not arrive at all – but because 99.9% of the time everyone does.

All of the people I care about manage to tie their own shoelaces, turn off their gas, and not fall over onto beds of nails with boring regularity. Life isn’t like the BBC drama ‘Casualty’ (unless of course you work in an A&E dept) with deadly power tools lurking around every corner.

My default position is you’ll get home perfectly well without me stressing needlessly and you won’t drive like an idiot even if I don’t engage in pointless worrying.

This doesn’t mean that I don’t care what happens to you. Far from it. People that I love usually occupy the vast majority of my thoughts.

This morning I was thinking about something else however. I have a special occasion to attend and there’s a glaring gap in my wardrobe.

I’d gotten ready early because I wanted to nip into town before my weigh in and see if I could find a nice brown leather belt.

Then rather bizarrely I found something just lying on the pavement outside a hotel on the way into Leamington.

It’s a thick brown leather belt from River Island – oddly enough in a Medium size – and it fitted my now 36 inch waist so perfectly on the very first notch that I was kind of taken aback at the sheer serendipity of it all.

I was going into town for a brown leather belt – and there, lying on the floor with leaves frozen to the buckle was just the thing I needed, in just the style and colour I wanted.

How can one fail to have a bad day after something like that?!

Well the fact is that they can’t.

After a bit of mooching around the shops (and a few nice little purchases) I headed back towards Warwick and my morning weigh in.

As I said earlier in the week I’ve been expecting a maintain or a gain and as it turned out I wasn’t too far wrong. After the massive and unexpected loss last week my body has slowed down again – but it’s still creeping along just enough for me to see a one pound loss. 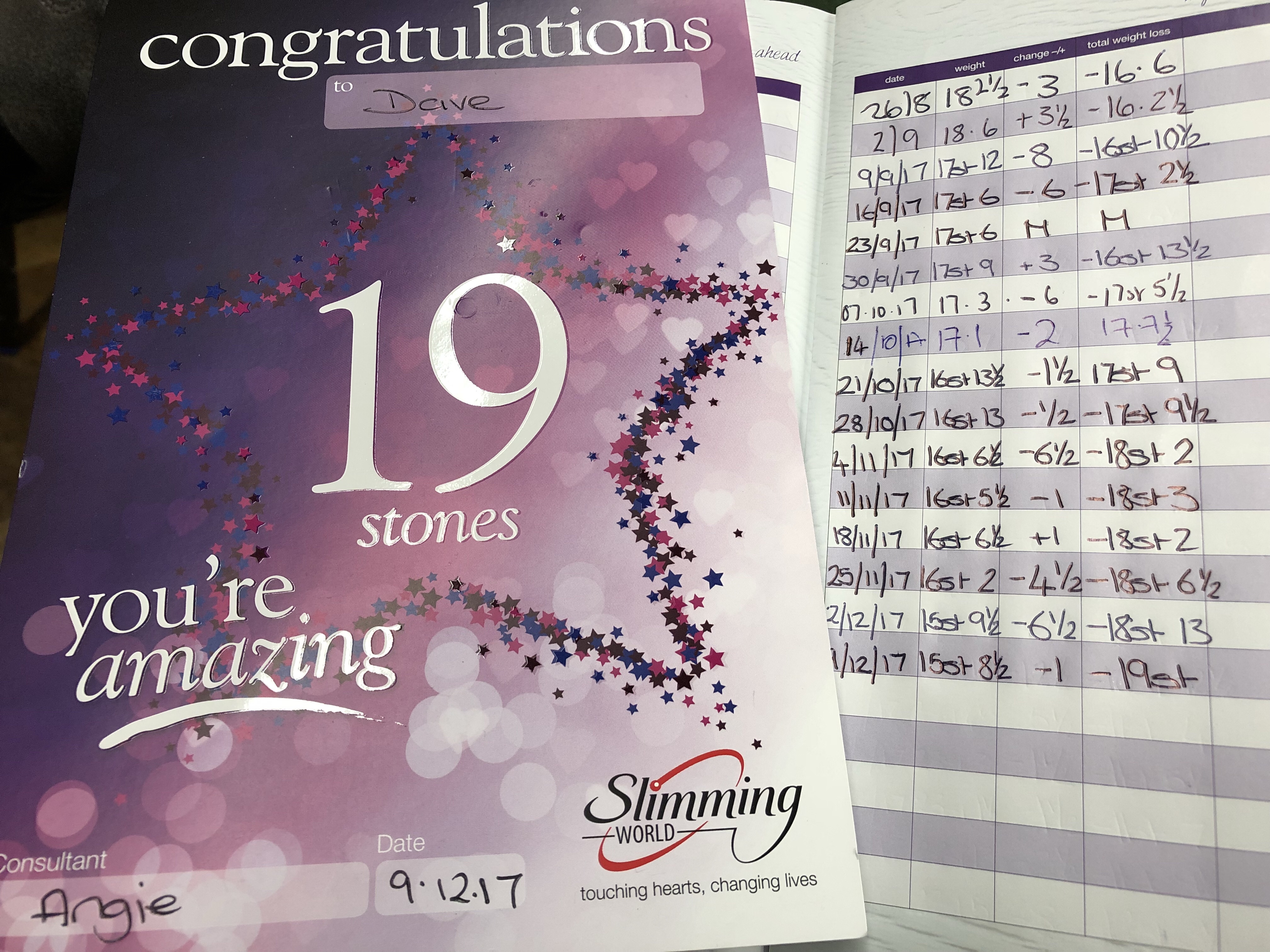 This of course means that I’ve now lost a mind boggling 19 stone of body weight.

How incomprehensible is that?!

I must admit – I’m the one that’s lost it and I find it really hard to bend my mind around it. It’s absolutely insane that I’ve gone from looking like this in 2016

To looking like this in the same place and same seat today.

After leaving my group today I had to go to the pharmacy to pick up a prescription – and the lady that works there once again completely failed to recognise me.

In her defence though it’s been a few months and a few stone since the last time!

When I told her about my latest milestone she just stood behind the counter, looking at me with an open mouth.

She was just agog.

The thing is that this lady in particular knows more than most what I was going through. She dispensed the prescriptions for the Metformin and Glimepiride to manage my diabetes that I now no longer have. She handed over the frequent pain medication that I no longer need to help me deal with the back, knee, joint, muscle or tendon strains that happened all the time. She also has no need to put into little bags the ointment and antibiotics that I needed for my bouts of cellulitis, frequent eczema or other skin allergies that were aggravated by my frequent oedemas. 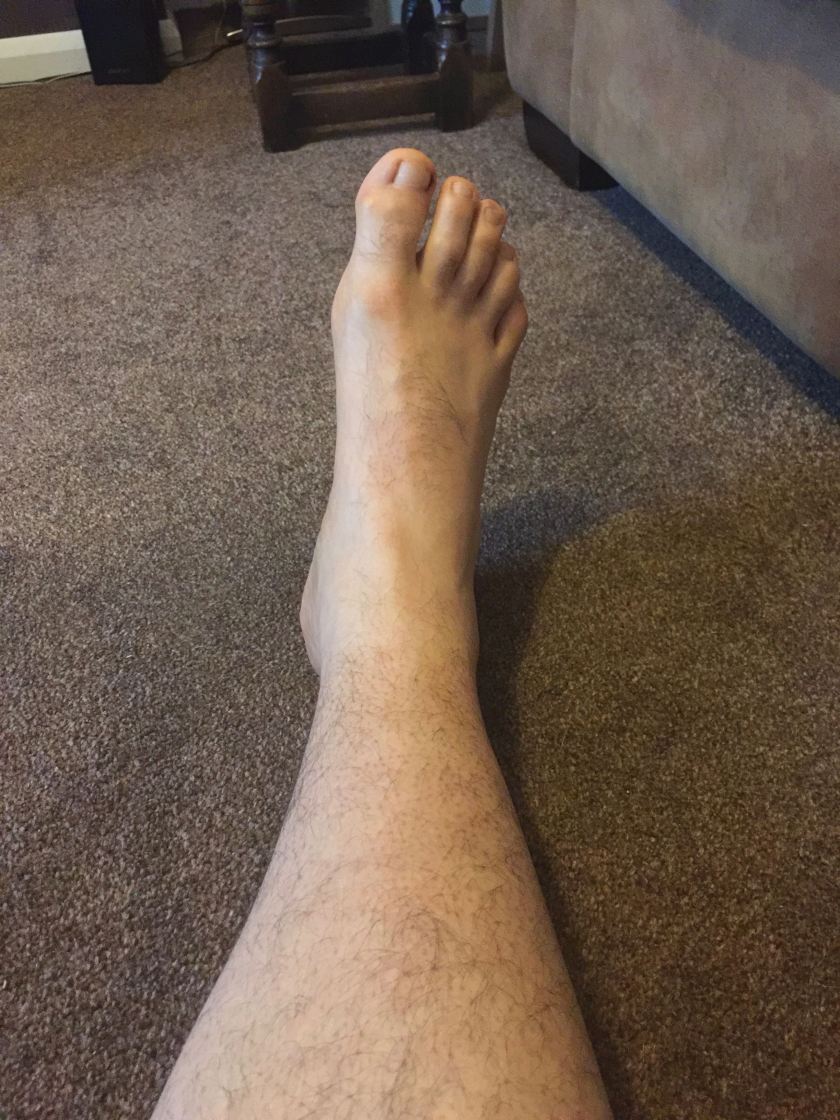 As we talked I realised how much I prefer the expression on her face now. Often I’m sure I saw pity (maybe even sadness – she’s a nice lady) and now instead I see admiration and happiness that I have my life back.

Who knows how long I’ll have the blessing of good health though. Nothing can be taken for granted.

As I mentioned to Angie today as I helped tidy up after group – I’ve done a lot to myself in the past.

There are some things I’m comfortable with discussing in public and some that are going to remain forever out of the wider domain. The odds because of some of these behaviours probably aren’t in my favour long term. I’ve done most things that are carcinogenic or supposed to damage my heart, circulatory system, kidneys or lungs and a few more besides over the years.

All I can do now is my absolute level best continuously – and to live each day as it comes, enjoying the wonderful gift of a life that I’ve given back to myself with hard work and persistence.

I’m not going to waste it or take it for granted ever again – and who knows internet – maybe this is why the universe has my back.