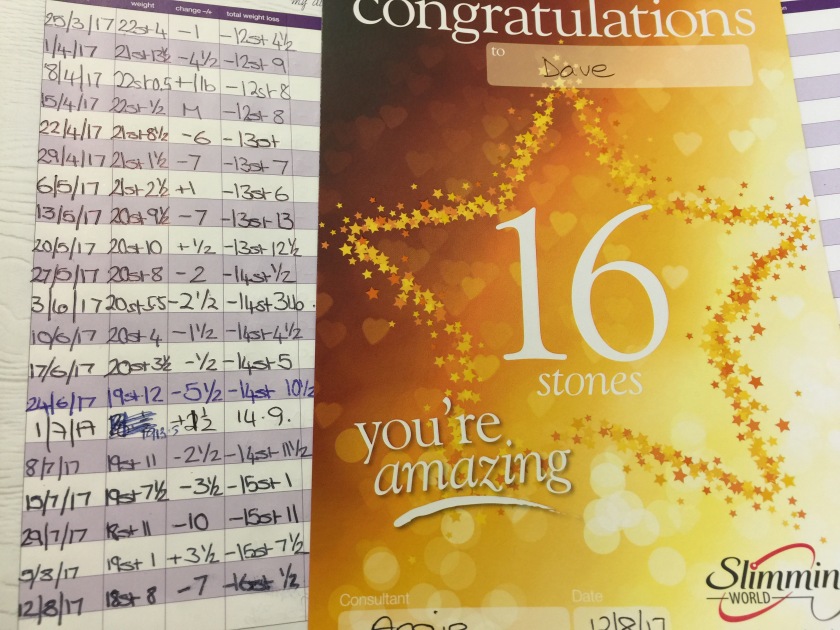 Although I didn’t get upset about last Saturday’s unexpected weight gain I’ve been trying really hard to focus over the last seven days on forward momentum – and making each day one that I consider to be positive so that I can turn things around.

Although a well rounded ‘positive’ day is also an emotionally balanced and productive one – I mean in this case specifically how it relates to the amount of calories I have taken in vs the amount I have expended.

Although I haven’t taken a tally of each individual morsel of food that I’ve eaten as I have at times in the past I don’t think I’ve had over 2000 on any given day (except possibly last Saturday) and on most days (certainly Wed-Fri) I’ve consumed well under.

As regular readers will have observed I can get pretty obsessive sometimes about this. In last week’s image therapy session the (guest) consultant was talking extensively about step tracking with smartphones – and asking members to keep a note of their daily totals and then try and hit 10,000 a day.

I do this kind of thing already, and I’m always poring over my stats. So – because I have pre-existing OCD in this area and I was staring at a membership book showing a weight gain this made me want more than 10,000.

I resolved to double the target and set myself a task of doing an average of 20,000 per day.

I’m quite happy to say I’ve managed to do it – and truthfully I’ve thoroughly enjoyed every minute of it!

Per day this week I’ve done an average of approx 22,000 steps, 11 miles, and burned around 4.6K total calories – which hopefully will translate into some solid progress on the scales at weigh in.

However – I never know. Exercise can often have the opposite effect – but even if it does there’s no denying that this week (no-matter what happens) has been a success in terms of goals achieved.

It’s later in the day now – and I’ve just walked into town.

I’m in a great mood!

Last week’s unexplained gain has been swept away by a superb loss on the scales. I’ve also got a new certificate – and I couldn’t be happier.

Saying it out loud sounds unreal enough – but typing it seems to be even odder for some reason. It’s an insane amount of weight and I long ago ceased to be able to visualise what it represents.

I’m a stone away from having lost TWO OF MY REGULAR WALKING COMPANION. A whole living breathing twalking person that’s been with me over hill and dale during the last year has almost been shed twice.

As I sit in a coffee shop typing this I realise I’m shaking my head from side to side at the absurdity of it all.

(Author shakes head from side to side…)

(Author considers the absurdity of it all…)

One of the good things about keeping track of my progress on the Slimming World site and having access to their usedul graphing tool (which I’m sure my teacher friend thinks could be better 😏) is that over time I can see that the losses are almost a completely straight downward line.

I’m still managing to keep an average of between 3-3.5lbs going – which I honestly never expected at this point in the game.

When I have a week like last week I could have easily given up and said ‘screw it’ in the kebab shop – but now when I look at the bigger picture here I’m reminded that over time it all evens out.

All I have to do is keep moving forward.

Things have come a long way because of this mantra. Even now I (in a very literal sense) just keep putting one foot in front of the other as best I can and try to trust that I’ll keep moving forward.

The constant hope is that what’s in the rear view mirror will not only remain there but that it seem more and more distant and disconnected from me as time goes on.

I remember crying after taking the above picture 16 months ago.

I wrote about it here.

That post seems so long ago now – and reading it still makes my lip tremble and my heart flutter a bit. I’m not sure that there will ever come a time when the intensely painful memory of that moment will not be etched in my mind.

Anyway. That’s enough ‘deep Davey’ for one day. It’s lovely outside and I plan to enjoy the living heck out of the afternoon.

Whatever you’re doing internet I hope you’re enjoying it – and that if you’re having a tough time you remember that whatever you’re struggling it’s only as impossible as you believe it to be.

Step back, get some perspective and look again.

You can do it.