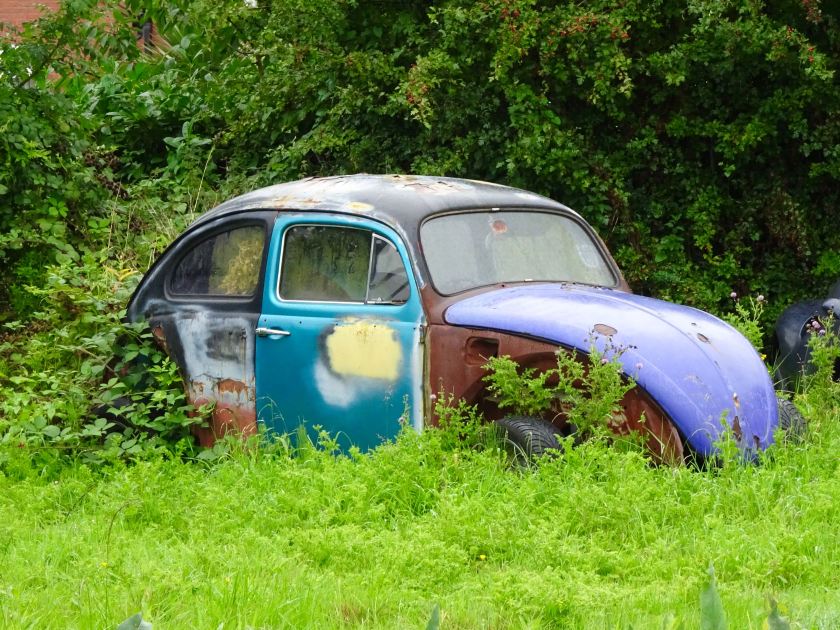 Today was supposed to be more inclusive of gradients and hills – and I was originally planning another exploration of the hills and tracks around Ilmington – however at 5am I was awoken by the hammering rain outside my window.

Fields full of livestock don’t make for particularly good walking after a huge downpour – and you tend to find that the corners where stiles and gates reside have two different kinds of deep mud. One smells really bad and the other smells almost as bad…

So my friend suggested that instead we take a walk along the Wyken Way – which is just on the outskirts of Coventry. As it’s somewhere I’d never been before I was pretty happy to go somewhere new – especially one with a nature reserve along the way.

The start of our walk was on the canal – right next to our parking space – and immediately as we crossed a bridge onto the towpath I could see that recent regeneration of the area had taken place. Both sides of the bridge were adorned with some really cool metalwork wildlife sculptures – which (like the signs dotted about nearby) suggested that there were Kingfishers locally. 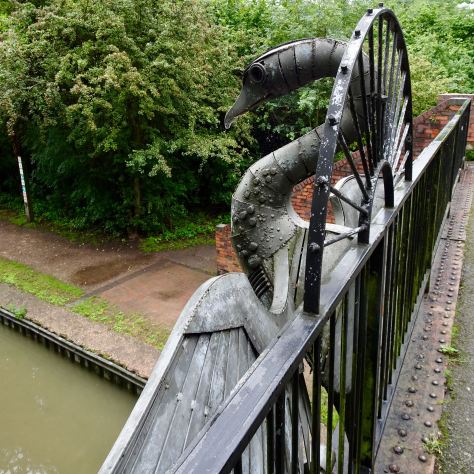 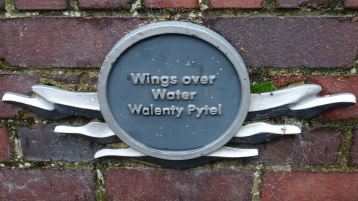 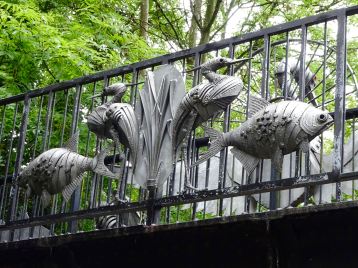 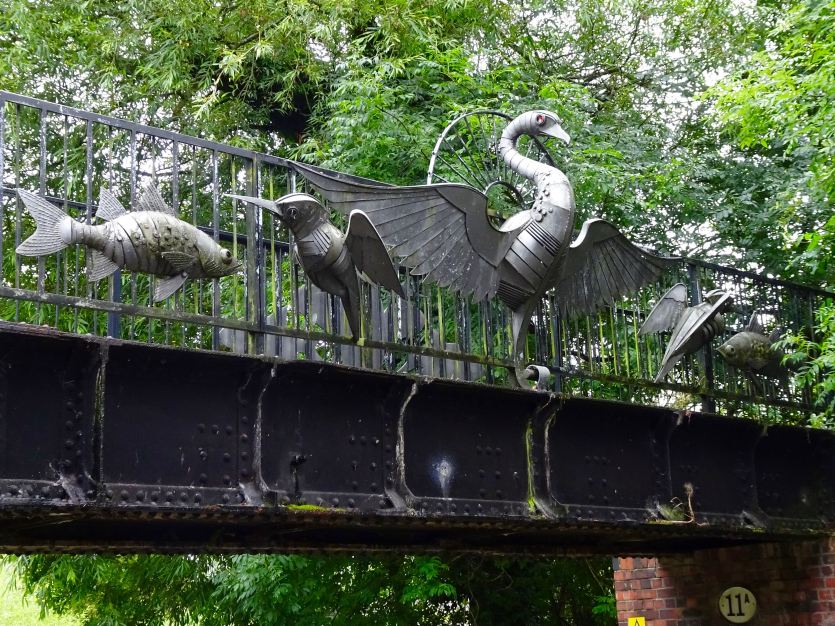 Sadly – despite both of us saying we’d never seen one before none were apparent as we made our way along the canal side. What was apparent however was that swanlings seemed to have a pretty good life in this area – and even before we got to the nature reserve I saw probably the largest surviving armada of them that I think I’ve ever come across.

Given that the brood that swans normally seem to have appears to be around 6/7 – unlike the swans in my local park – this family looked like all of them had all survived, which was really incredible! 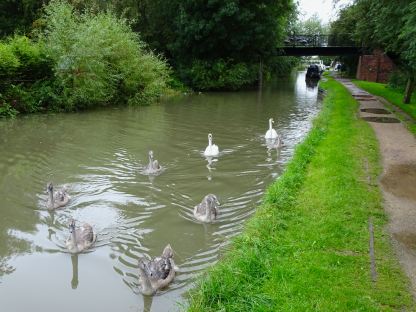 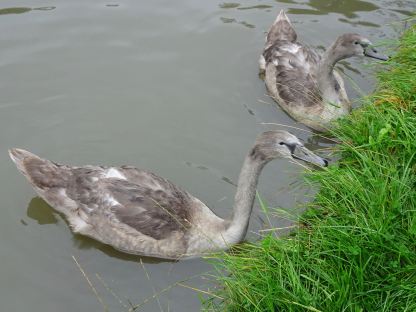 They were all really lively and healthy too – and very inquisitive indeed, coming up to see us and nibble the grassy bank.

Further up the canal we came to a fork – and stopped to briefly ask for some directions. The canal volunteer in the blue jersey retreated into his little hut, and much to the obvious delight of my companion returned with a huge OS map – and proceeded to point to where we were and where he thought we had to go. 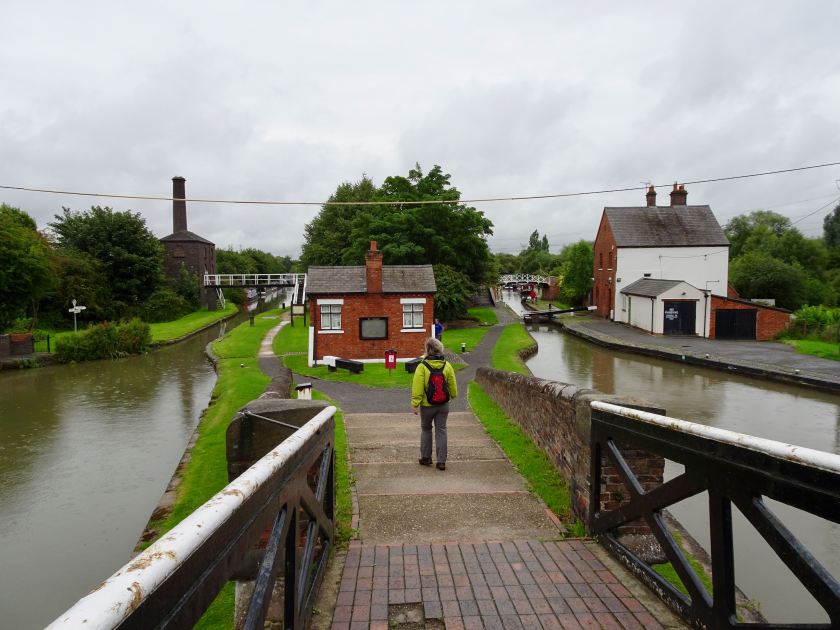 I was quite impressed – but as we moved away twalking and laughing my friend quietly pointed out that hers was a better resolution and showed much more detail.

I could be wrong but I think I detected a teeny tiny hint of competitive cartography in my vicinity. Never compete with a girl’s map resolution. It will end badly.

The opposite side of the canal appeared to mostly be taken up with national grid infrastructure – and there were many warning signs, along with lots of ‘planted steps’ for water voles, of which there were allegedly loads.

However they seemed to be hiding in the same place as the Kingfishers today because despite them having tons of places to climb in and out of the water they all seemed to have gone on holiday.

I imagine they were probably sunning themselves on a nice beach elsewhere while we stood in the rain on the bank opposite their empty homes waiting for a fleeting glimpse of their noses.

After a while (and a particularly muddy field full of cow s**t later) we found ourselves on a path to the Wyken Slough Nature Reserve.

As you may expect the rain has been a constant feature of the day – and despite the really rather miserable conditions it can produce (wet legs and leaky boots I’m looking at YOU) there’s also some real beauty to be found when things get a fresh soaking – and along this tiny overgrown lane everything seemed to be about to drip, but not quite making it to the ground. Every bush and branch had a weight and pregnant poignancy that probably only lasted for a matter of minutes while we were there and then was gone again.

At that moment in time everything looked wonderful. 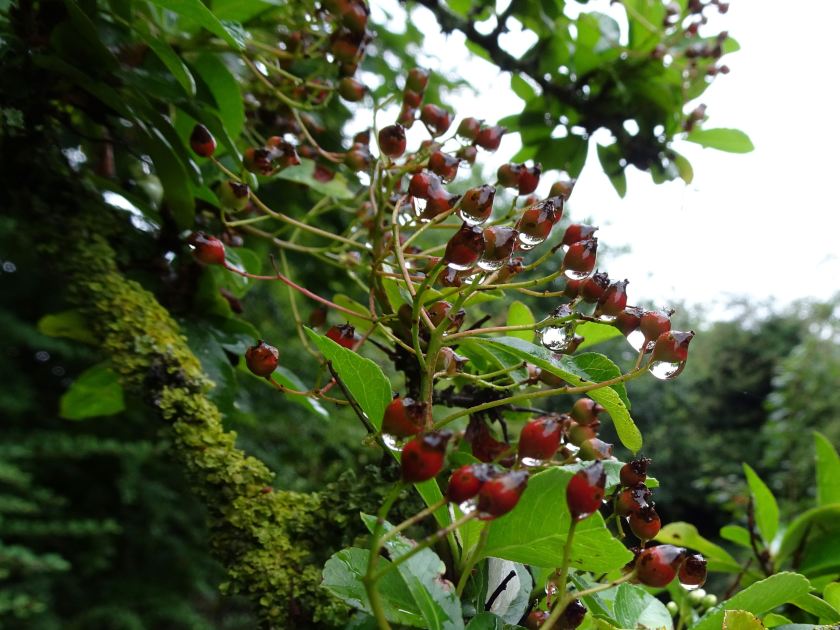 It was around here that we got a little lost – and spent a while walking into bushes and routes that effectively became dead ends around the back of an industrial estate.

But exploring is fun!!!

Getting lost is fun!!! 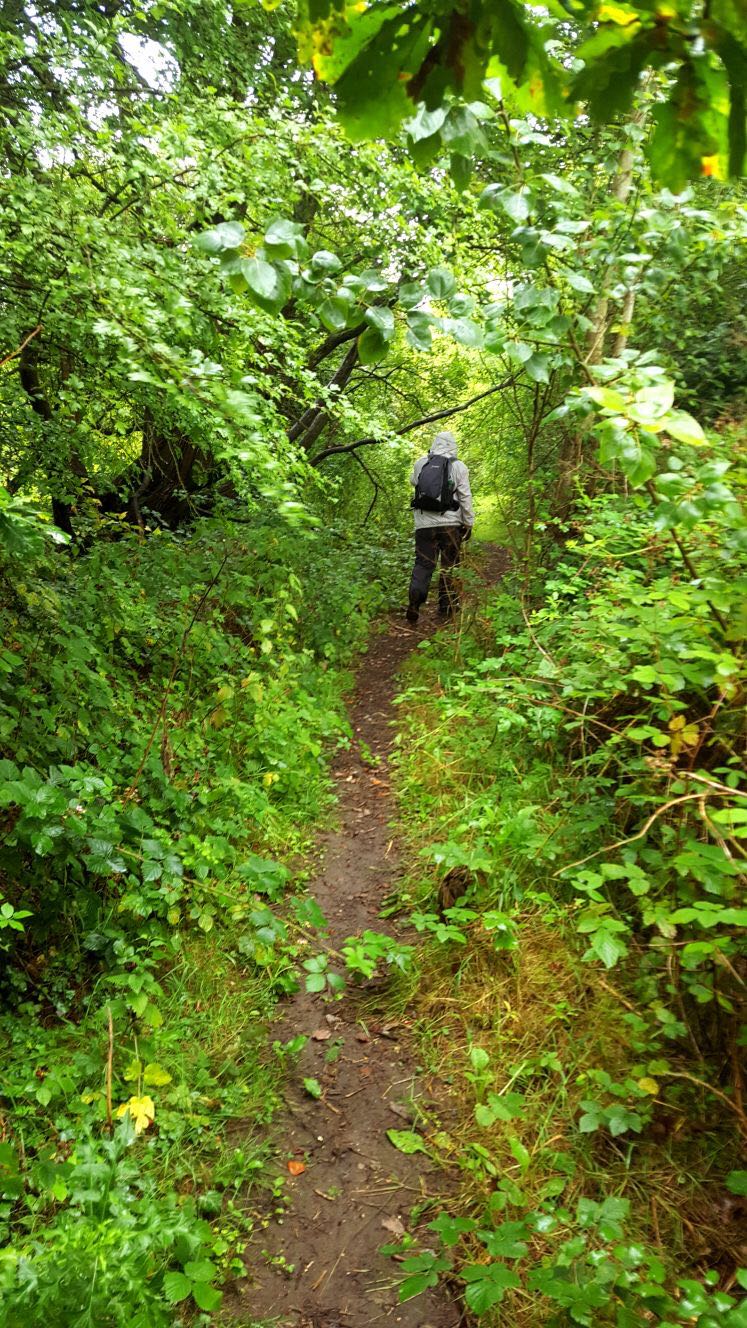 This didn’t last for too long however and we soon found our destination – along with a huge marsh of bullrushes. 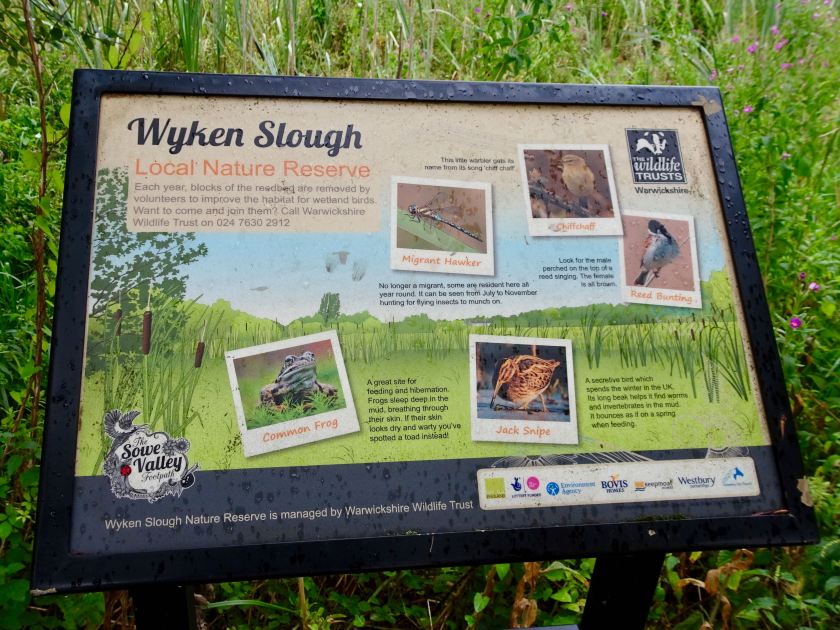 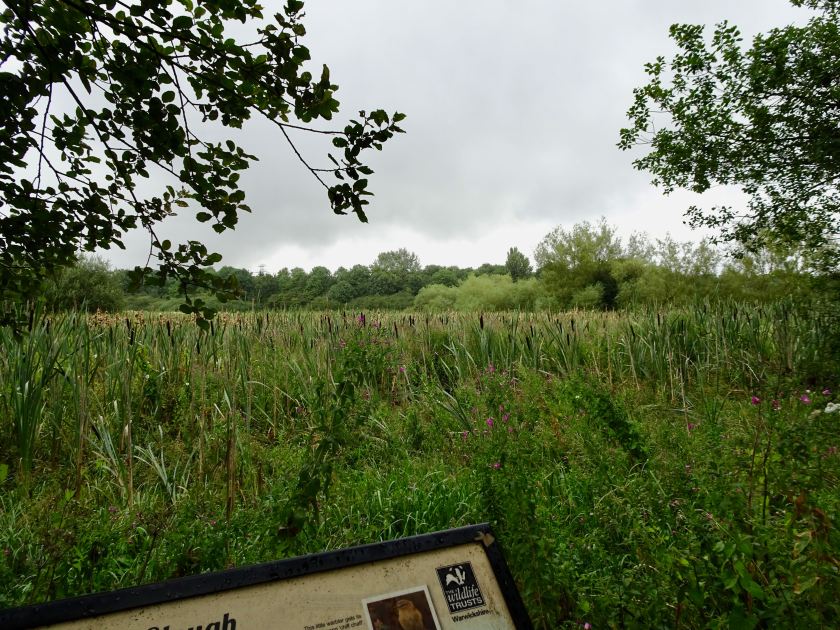 On the other side of the path however was an army of swans, ducks, gulls and coots! 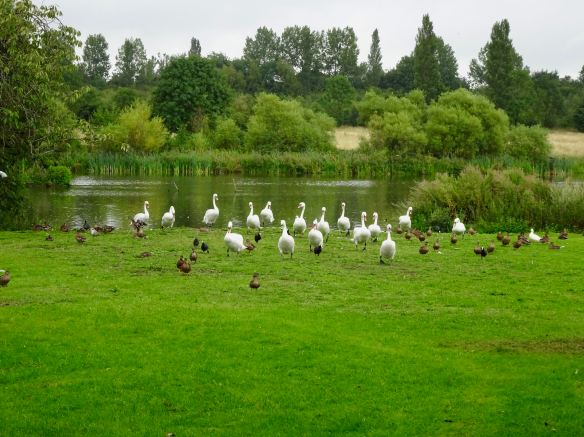 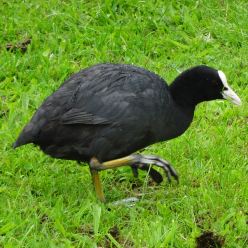 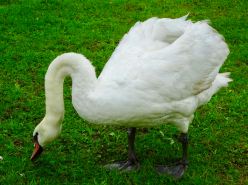 I couldn’t make out whether they were happy to see me and wanted food, or whether I was in imminent danger, as when I moved in for a closer look the swans (of which there were a LOT seemed to be making a rather direct path toward me…

Thankfully I didn’t get mauled and won’t be appearing on in any swan snuff videos on YouTube any time soon!

Shortly after this we decided to head back to a pub we’d passed earlier on the walk at the canal junction and have a bite to eat. We eventually found ourselves inside what turned out to be an unusually busy Tuesday lunchtime service. 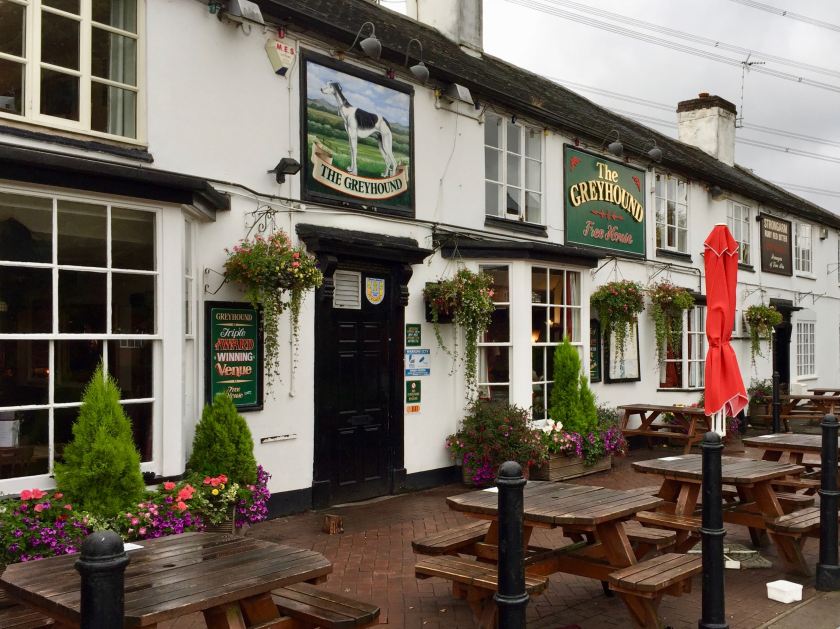 However, despite the Greyhound proclaiming it was a ‘triple award winning venue’ (and I hate to be critical but if the cap fits) it seemed to be staffed by people who had no idea who should be sitting where or the order in which people should served and were surrounded by lots of tables full of customers waiting for their lunch. Each table’s occupant looked either very annoyed or very bored and had half empty drinks glasses in front of them along with irritable, hungry children.

After we’d had our drinks we decided to move on rather than order and wait an eternity for food and have a coffee at home – saving £5.50 for a baked potato in the process.

This actually turned out to be quite fortuitous – because on the way back from my friend’s house (after being pleasantly caffeinated by her) I decided to check Kenilworth to see if there were any unicorn trousers.

I found not one, but TWO pairs within budget! I’d wanted to pay no more than a fiver – but each were £3.99 – and my favourite of the two was an almost BRAND new M&S pair!

I have no idea what’s going on with the residents of Kenilworth – but the tags were still on one shirt that I picked up today – giving a clear indication of just what a bargain hunt my clothes shopping has suddenly become! 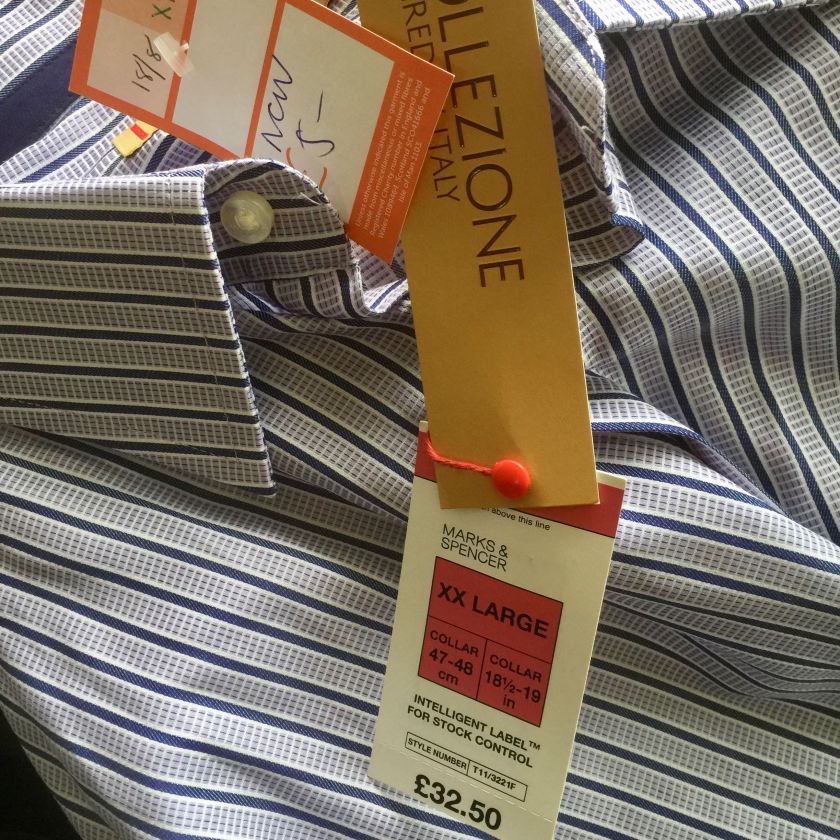 I now have multiple really really nice outfits of practically brand new clothes in my wardrobe for less than the cost of a single shirt when I was an 8XL guy!

To be honest it’s been a great day.

I’ve had excellent company and lots of chats with lots of friends. I’m also seriously winning with regard to non-scale victories.

If I ever ever decide to backtrack on any of the good choices I’ve made lately in life I want to remember how I feel today – and I’m so glad that I’ve gotten into the habit of writing it all down so that I can prove to myself if I need to what I feel and sound like when life is good and things are clicking into place.

I can walk for miles, I have great friends, I can get into cheap good quality clothes – and I have a sense of positivity that not only propels me forward, but that occasionally I can see rubbing off on others in a way that it never used to.

Although from time to time I have bad days internet the vast majority of them now are ones where I lift my head off the pillow and I’m just thankful I get another day full of possibilities.

Even if they so far have not contained a single Kingfisher…