This morning I’ve been out with a couple of firm friends, who only met each other for the first time this today… 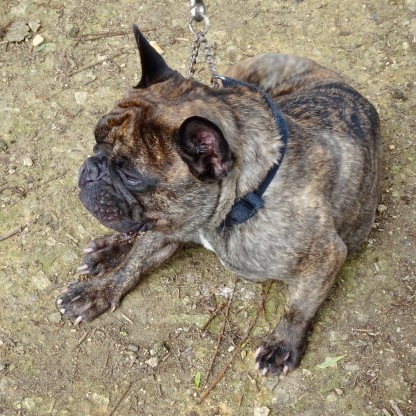 Initially they were quite wary – but in no time at all after some introductions they were getting on famously.

Probably bonded by their mutual love of bird watching Boris and Freckles seem to get along pretty well when they first met, and happily sniffed each other’s behinds for a while as their pet humans above greeted one another with (less socially developed) handshakes.

I doubt that Freckles and Boris would have minded me joining in – but I didn’t want to intrude and instead stuck to human pleasantries. Also – as fragrant as their behinds must be I was actually more interested in the other wildlife – of which there was quite a lot today at Arrow Valley. 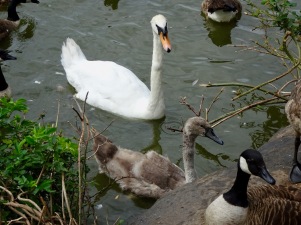 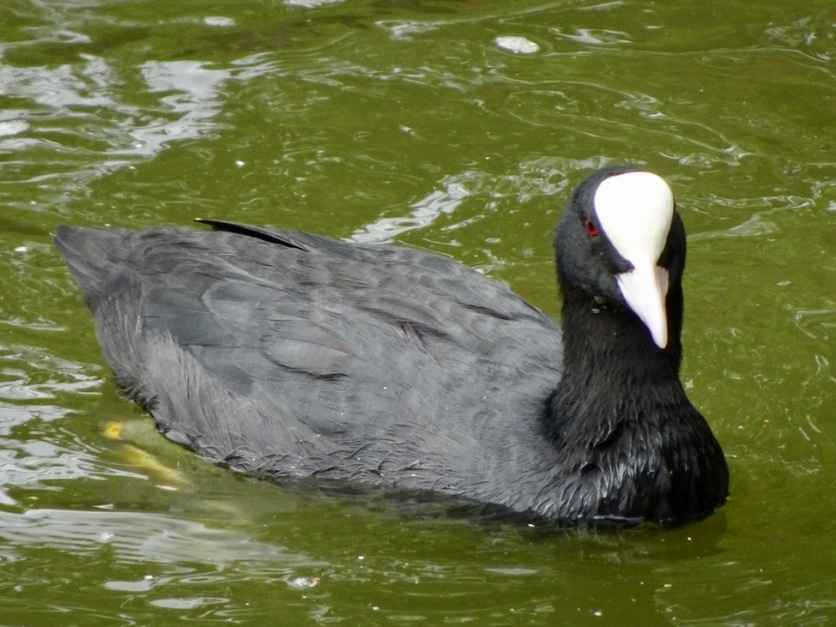 The Pooches also seemed unusually willing to be photographed this morning.

Normally they refuse to stay still for the camera, yet today here they were allowing me to take snap after in focus snap. 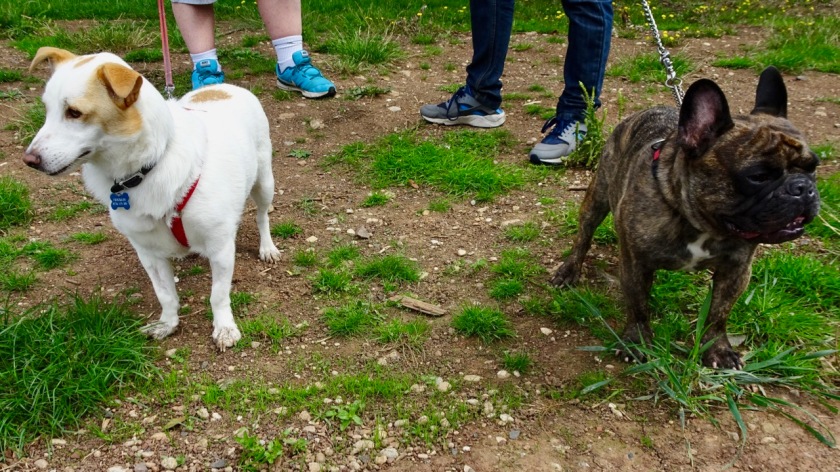 You might think that I’m a charming Dr Doolittle given how calm and collected they are, or what sweet little cherubs they have been to pose for my photo. However what you can’t see just behind me is the piraña like feeding frenzy going on.

A little girl was flinging giant lumps of bread to a growing collection of birds at the official ‘invigorate the ravenous little monsters with wings‘ baked goods slinging platform – and Boris and Freckles were both transfixed by the resulting commotion.

As I turned away from them to watch it struck me that some days what initially might seem like a great stroke of luck is actually the exact opposite.

Sometimes life isn’t what you expect when you’re the little duck that catches the golden crust.

As we left the beleaguered little quackers and continued around the park it was clear however that not all was well elsewhere. The strike by refuse collectors in Birmingham is having a pretty dramatic effect on this usually well kept space and the bins are currently overflowing at each and every corner.

(you don’t need photos of this – it was grim)

People have left carrier bags full of rubbish close to them and as you might expect with a lot of wildlife around these are quickly getting ripped open. Frankly the park is a mess today – and I really hope that this doesn’t hurt the birds – especially the fledglings.

On the main island there are a few nesting Herons – and from what I read on the visitor centre bird spotting chart they have some young with them. However when I looked I couldn’t see any – and only one of my full zoom photos of an adult came out clear enough to use. 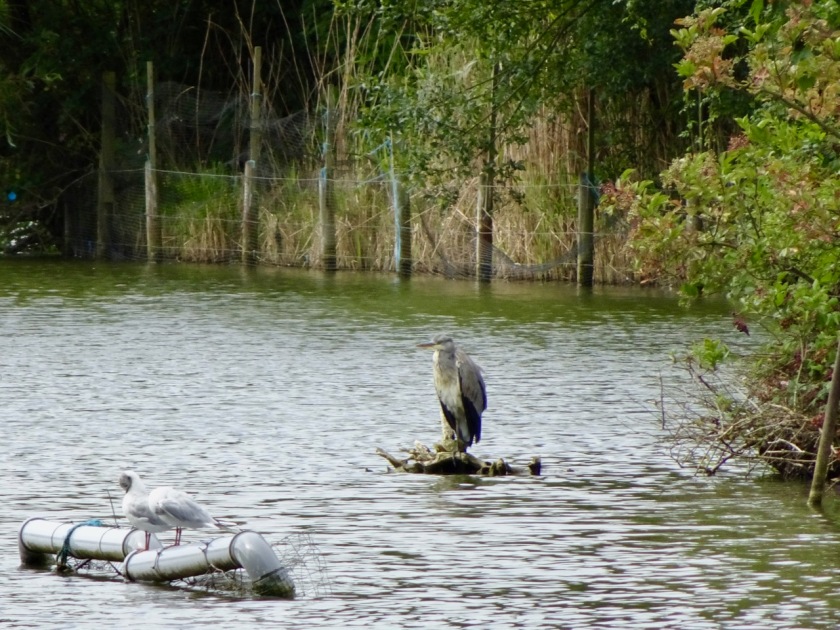 Apart from the overflowing bins and the skinhead-like seagulls though Arrow Valley was quite serene today. Whilst idly strolling we did around 3 miles around the reserve – all the time with Freckles and Boris sniffing away in the bushes and trotting back and forth to say hello to passers by and other dogs.

As lovely as all this was though I must fill my green exercise ring on Apple Watch (which sedate strolls do not do sadly) otherwise my OCD will cause my head to explode. As lovely as my amble was I needed to do MORE!

Since I am still in need of a pair of black trousers, I headed out when I got home for a brisker walk into town to try and find some.

Sadly these are proving difficult to find – especially given that I have mentally budgeted only £5 for them. All in all I walked a further six miles trying to find my mythically cheap item of unicorn clothing and returned empty handed – but I will persevere!

(I have heard a rumour that there are some in a pot – just at the end of a rainbow!)

On the plus side every step I do is something toward the scales next week – and given that the theme of last Saturday’s image therapy session was step counting and ‘body magic’ (exercise with Slimming World counts to awards) I’ve been trying to keep my numbers up.

I’m also trying to ‘tweak’ my food a little bit to reduce calories and today swapped out kidney beans from my favourite chilli dish and replaced them with an aubergine and some chopped green and black beans (both of which came from a friend’s allotment and were delicious). 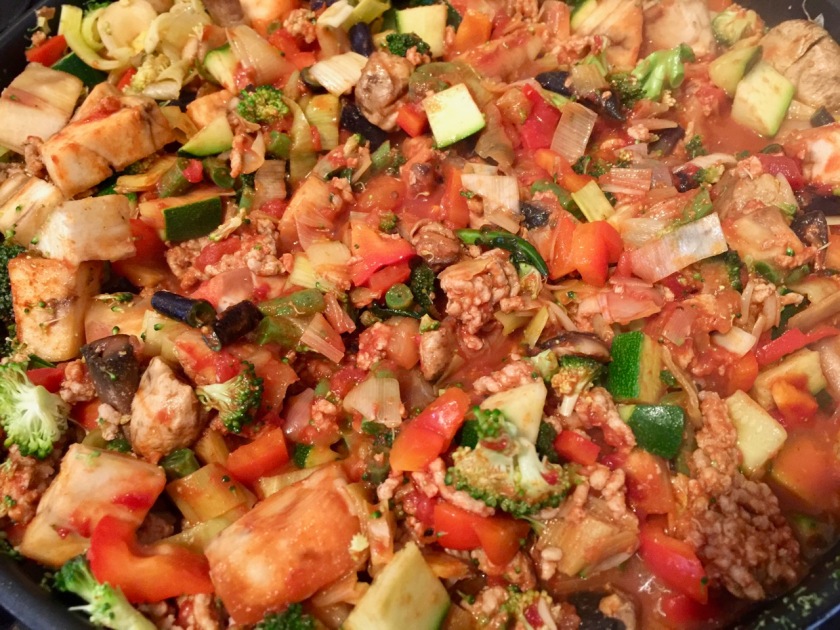 The other ingredients were a courgette, broccoli, red pepper, leeks, mushrooms and 5% fat pork mince. The seasoning was cumin, smokey paprika, chilli powder, salt, a beef stock cube, some garlic – and finally to season some freshly chopped coriander was thrown in at the end.

Honesty this was so good that I may just forgo the kidney beans altogether from now on. A can of them has 280kcal in it – whereas an entire aubergine has 50Kcal – and 100g of green beans has 25kcal.

Finally – Rusty McBike is now back in the saddle!

Well – at the very least Rusty has a new (old) saddle (courtesy of a friend’s dusty garage contents) and although I’ve not yet had a chance to properly test her out on a long journey yet things currently seem very secure indeed.

She has even got a new donated strap-on gel butt cushion to alleviate the intensely bruised bottom that the previous saddle was immediately capable of giving me. It’s early days but I’m hopeful that this superb combo means that we’re going to be very happy together. 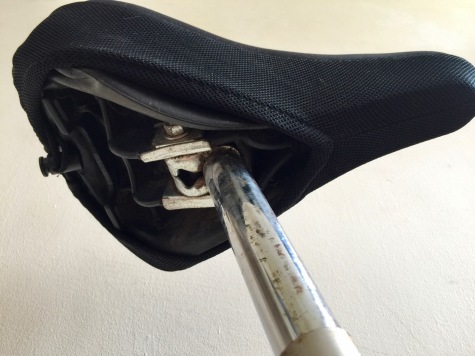 If worst comes to worst another friend has been a dumpster diving hero and secured yet another saddle clamp from the clutches of a nearby skip (in the right hand pic). As rough as it looks as long as I have a spare then I’m pretty happy.

It saves money on eBay and every little bit can go to my unicorn trousers!

As soon as I get a chance I’ll take her out for a spin and let you know how I get on. It’s most likely to be Wednesday however as I have even more planned for tomorrow! Time and tide waits for no man!

Anyway – I must get some sleep – nighty night internet.