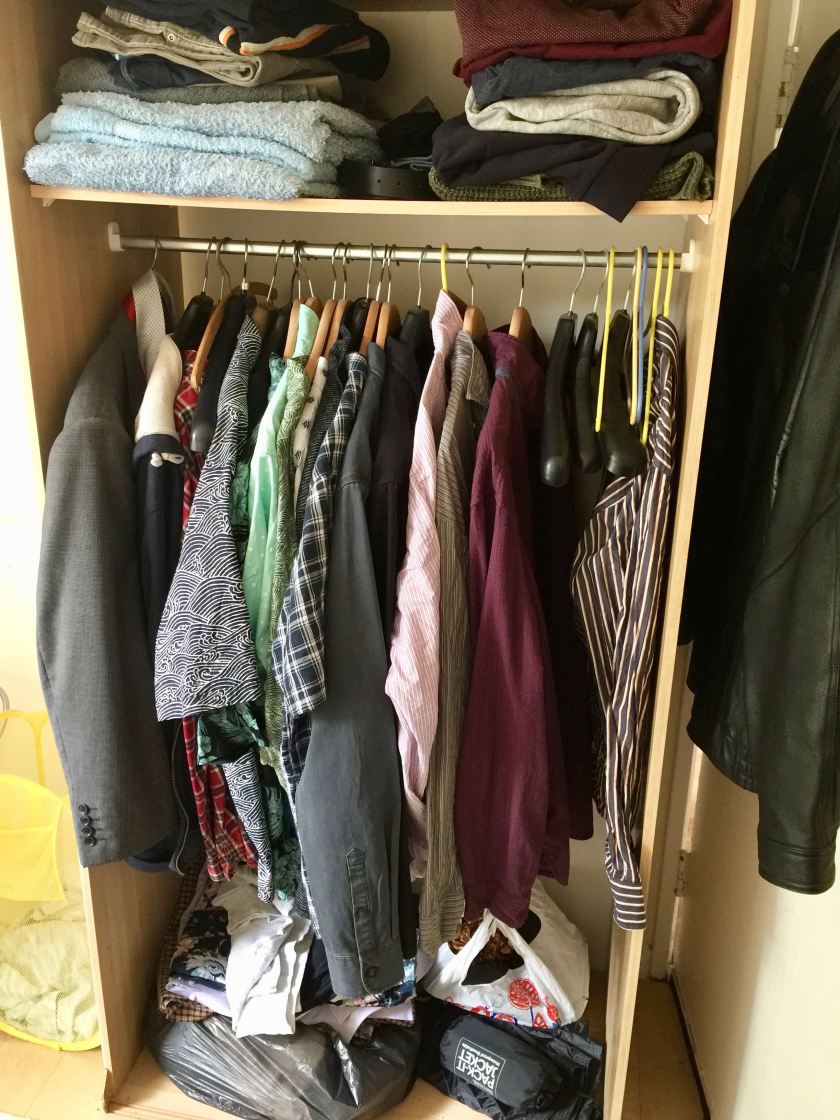 Although occasional insomnia sucks the catch-up sleep that follows it (at least in my case) is glorious. It’s now 6.25am on Sunday, the sun is coming up, birds are singing and I have about 11.5 hours of solid grade A shut eye under my belt. Honestly I feel like I could conquer the world!

But what to do with my Sunday?

(Author decides to move a wardrobe. Just for the hell of it.)

Well – I think that I can say with considerable authority that falling down the stairs being followed by an IKEA wardrobe wasn’t the plan for the morning.

I had been meaning to move one of my two wardrobes into the dining room of some time so that I had a place to hang clothes after ironing. Unfortunately while moving it I completely misjudged the weight and it slipped on the top stair – pushing me backwards as it fell about half of length of the staircase.

Thankfully I managed to stop myself after a few stairs with one hand on the rail and the other on the wardrobe. However – although I was unscathed my furniture wasn’t so lucky… 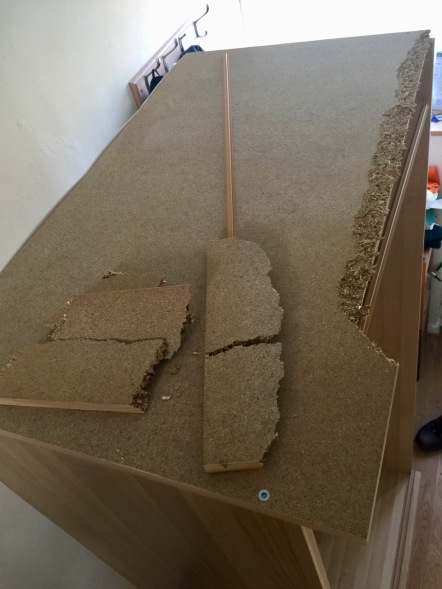 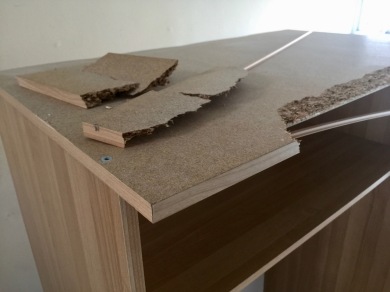 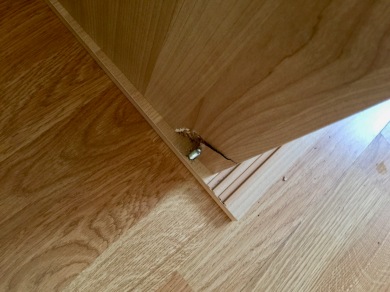 Mind you – as annoying as this is if I’d been doing this 15 stone ago the ending to this morning’s moment of excitement may well have been quite different. About two years ago I slipped while getting into my car and grabbed the steering wheel. This fared way worse than my bannister when faced with my (then) 35+ stone weight. 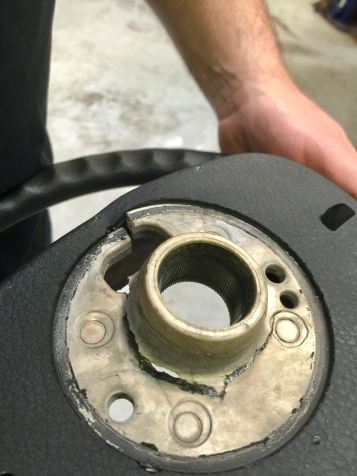 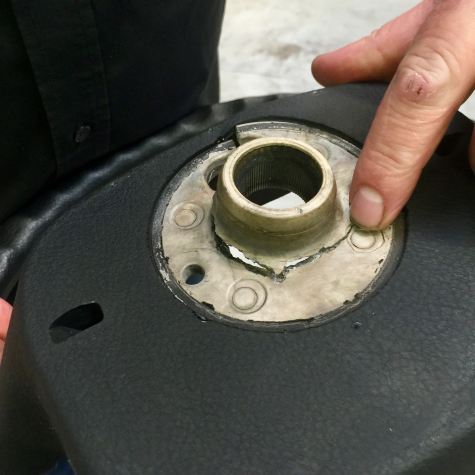 So, annoyingly – although this was very nearly the start of a ‘Darwin Award‘ story (idiot crushed to death at 6am by IKEA wardrobe) I like to think it’s actually more of a non-scale victory.

My smashed up furniture may disagree with my positive spin however…

But what to do with the REST of my Sunday?….

(author decides to do some organising then make do and mend)

Well – after a few nails were applied to what remained of my wardrobe I was still able to use it as a clothes organiser. Sadly the doors are now basically junk – and it will definitely need replacing – but hey ho.

It will do for now.

You might ask why I need a ‘clothes organiser’ downstairs rather than a wardrobe upstairs – and there’s (at least in my mind) a good answer.

Increasingly my store of clothing has become little more than a conveyer belt. The problem has actually gotten so bad that shirts are piling up on chairs because after a few wears and washes they simply don’t fit properly any more.

On the left is one 4XL and several 3XL’s that are almost too comical to wear but that I can’t yet face parting with because I like them. They’re not quite so large yet that I want to give them away.

The items in the middle represent things that I can currently comfortably wear and things that (to the right) are becoming wearable. To the far right is one smart striped M&S shirt that I can just about do the buttons up on – and it’s flipping lovely.

The pile at the bottom in the bin liner is 4XL clothing that’s now mostly destined for charity, and apart from the jacket and hoodie on the left everything is now graded in the order that it needs to be.

I can now finally see what I can and can’t wear at a glance.

This (for the time being) is my relationship with clothes. Nothing is has a sense of permanence and no item usually gets worn more than a few times before I have to say goodbye to it.

On the one side its annoying – but on the other also quite exciting. For the first time lately I have a variety of things that I like the look of to choose from, rather than depressing tents that just used to cover me.

IKEA has become something of a theme of today – and whilst passing the recycle centre on the way to the supermarket today I noticed a POANG footstool. My friend had said that if I saw another at the same price as mine to get it for him, so I popped in to grab it (It was £5 – an absolute bargain!).

However, right next to it was an almost brand new POANG chair.

Readers will know that I already have one of these but have been way too much of a sissy to sit on it (I have been convinced I’d break it) but my experience with the wardrobe, the bannister and my memories of the steering wheel made me think – ‘you know what – I’m going to make my house more comfortable for new Davey rather than the old me’ – and I bought it too for £15 (also an absolute bargain!).

I decided to put the other one in my study where I have a nice view out of the window.

This time however – rather than screwing around and just looking worriedly in its general direction out of the corner of my eye whilst sitting in my HUGE armchair (if you want to see how big it is look here) I’m actually sitting in the damn thing and it’s REALLY comfortable. 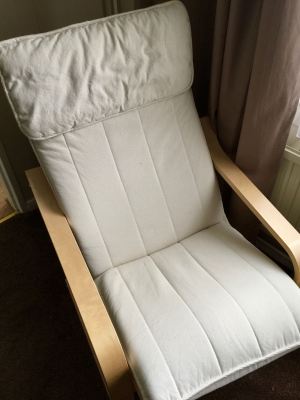 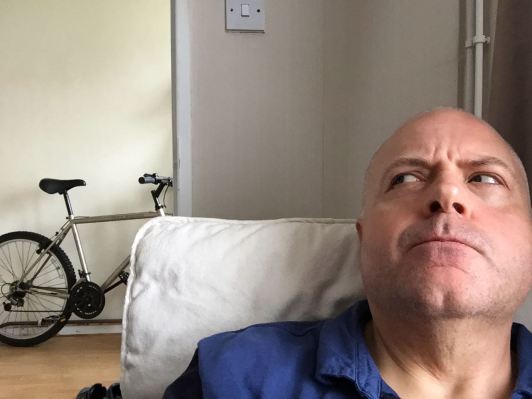 I’m not just static either – or propped up against the wall. I’m confidently bouncing up and down in it! However – when I take a selfie for the blog – I’m reminded of the next thing that needs sorting out.

It’s not the best to be honest – and is rocking back and forth like a see-saw, which is hardly surprising as its a teeny tiny bit corroded underneath. Annoyingly it seems that the stem on Rusty McBike is actually different to other newer bikes (it’s 25.4mm rather than 27mm), meaning that when I borrowed my friend’s stem and saddle yesterday it didn’t fit because it’s too big… 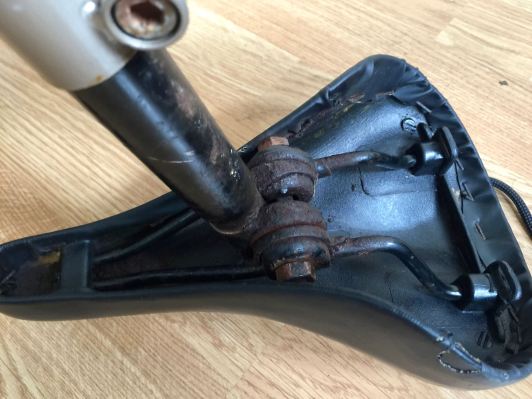 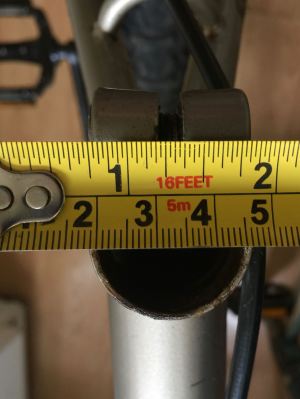 My other friend in the however reckons that it can all be fixed with this item: 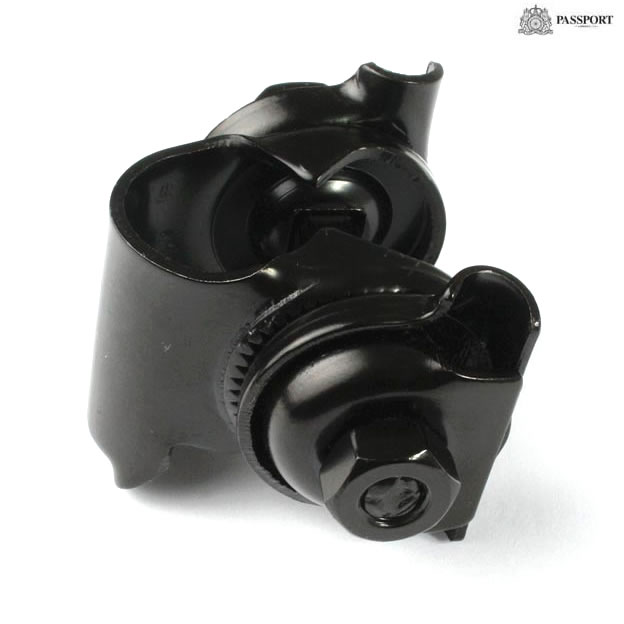 The problem is that I’m wary that my weight will make the same thing happen again – as it happened on my last bike years ago as well.

I know this is probably just in my head – but I can’t help it!

Well – the saddle came off a little easier than expected – now all I need to do is replace the clamp – or maybe even the entire stem. I found an alternative style (which is integral to the pole) that makes me feel a little less paranoid, and looks like it’s far less likely to rock… 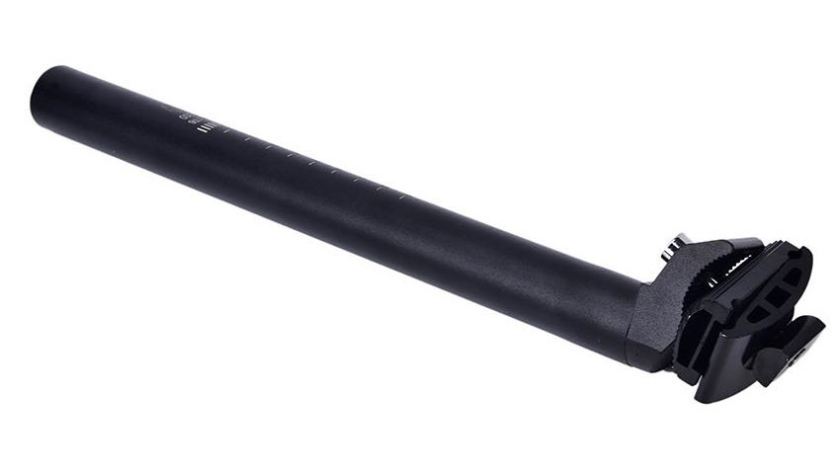 Guess what Davey will be doing next week internet!