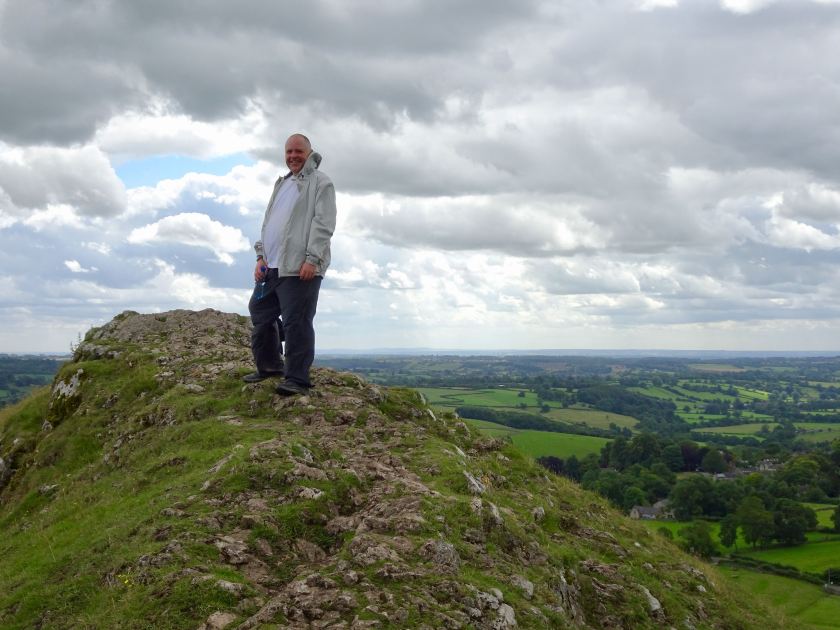 One of the things that I’ve been pretty happy about after going up Snowdon last weekend is that instead of being completely destroyed like I’d expected to be the absolute opposite happened – and I’ve been full of beans.

Although it may be attributable to further great progress with my weight loss – I’ve just felt considerably more ‘sprightly’ than usual over the last week and I’m not over exaggerating when I say that there’s been an extra spring in my step pretty much everywhere I’ve been. I feel quite light on my feet at the moment and I’m really beginning to like climbing gradients! Although I’m still not so keen on the downhill bits afterwards I’m gradually getting better at both.

Today I’d arranged to go and visit my friend in Derbyshire – and it was an excellent opportunity to have a go at some of the ‘bumpy’ bits in the Peak District.

I was previously of the opinion that I’d never been there before, until my mate pointed out that as unruly and savage youths in secondary school (although I speak primarily about my own feral self) we were taken to Dovedale on a Geography field trip (we go waaaay back he and I) and during this day release from our incarceration we walked along the river Dove taking photographs detailing the erosion and geology of the area. I’d also been back there with my Dad a few months later.

I hadn’t realised though that this was in the Peak District – and as soon as my friend mentioned climbing Thorpe Cloud (wikipedia link) I knew we had to go back.

Upon arrival this morning we parked up at a National Trust heritage site called Ilam Hall. This is a gloriously maintained place – and there’s clearly a lot of love and care gone into making sure that even on the most overcast day the grounds look in tip top condition. 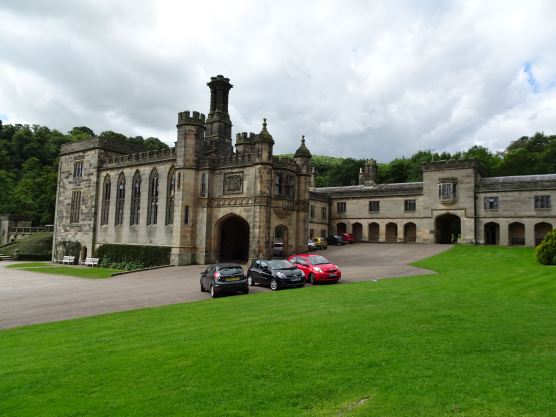 The nearby Ilam village also has some really nice little features – with a large number of rather twee matching cottages, a (somewhat ostentatious) monument and a genuine concern for smaller local residents that may wish to cross the road. 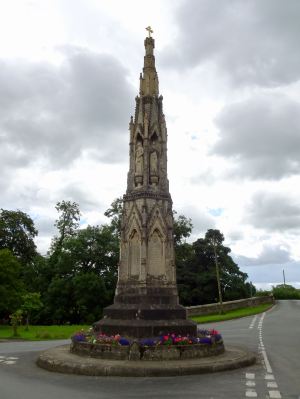 My friend had with him a rather cool little Garmin GPS plotting device that occasionally made little noises if it thought we were straying off piste, and with it and a full size paper OS map of the area (I’m definitely getting into these – my proud cartophile friend was RIGHT – I did learn to love them!) we made our way through the village, around Bunster Hill and across a few fields of sheep and cows until we hit the river Dove and the bottom of our objective.

Unlike the relatively winding and gentle start to Snowdon’s ascent last Saturday, this is a pretty steep, in your face clamber up a hill.

However, it’s over in a lot less time. 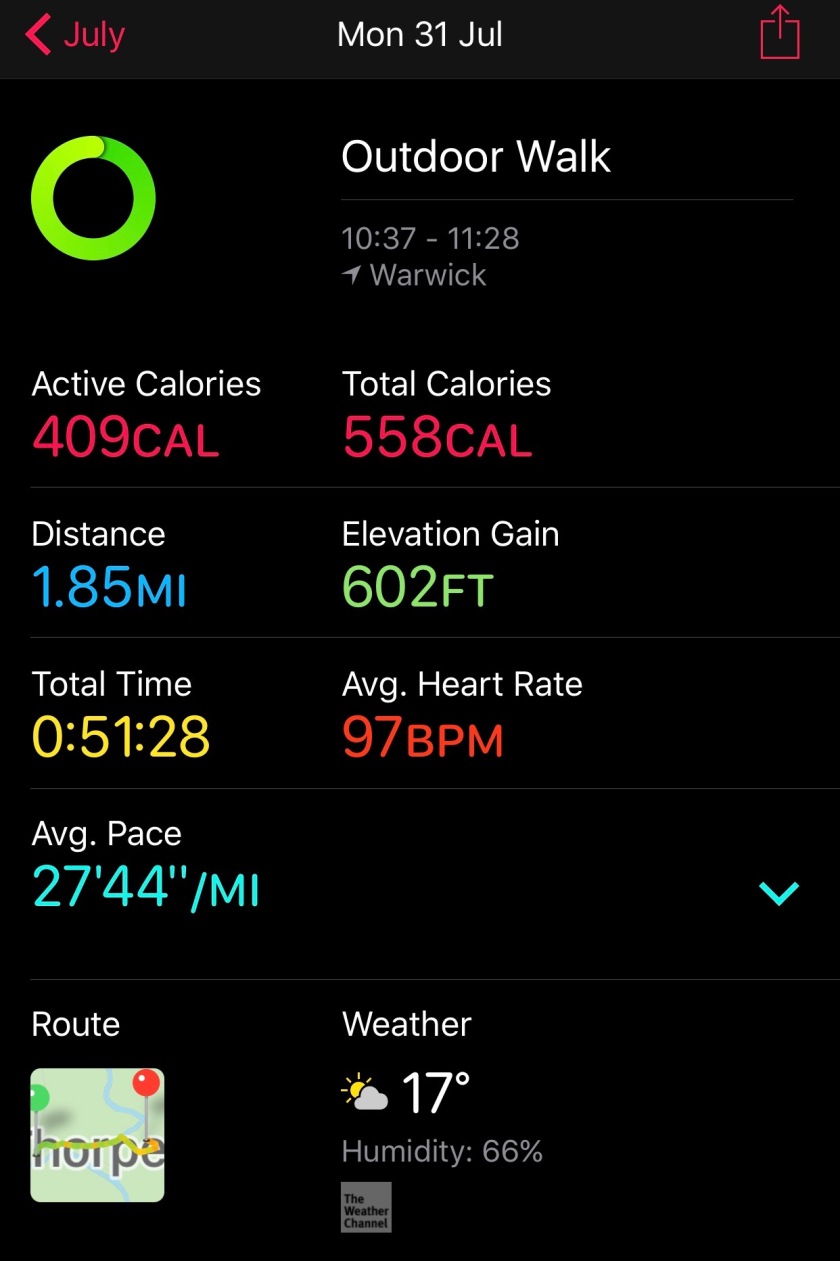 It’s not particularly difficult or technical, but it is some pretty good cardio – and by the time I’d reached the top my bpm had reached 140 – and it wouldn’t be for the last time today.

However – it was really worth it. The view was lovely – and in the distance (if you look at the video) we could easily see where we’d come from. 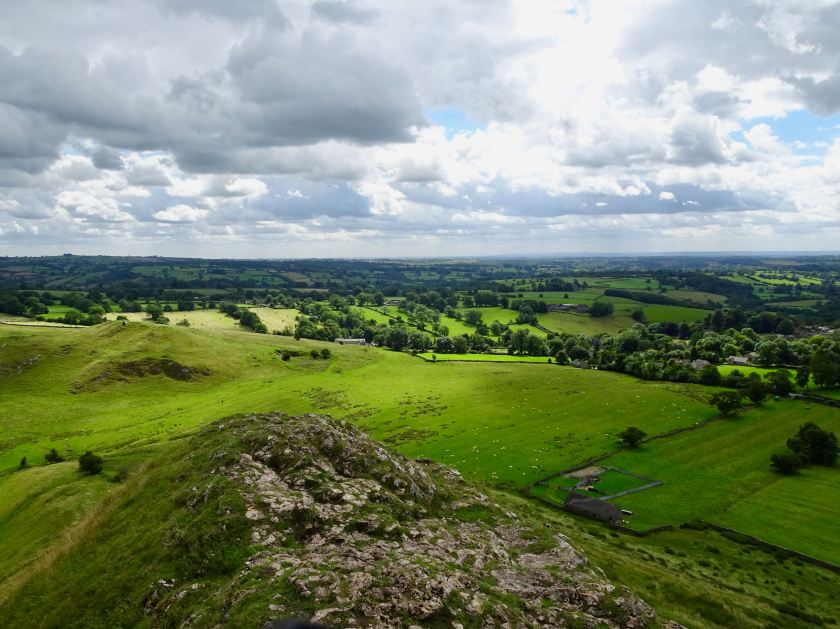 After reaching the top and looking at the view for a short while we decided to walk along the River Dove towards Milldale (re-tracing our field trip) which you can see in the distance when you start down the other side of the hill. Although not particularly spectacular, this is really nice (mostly wooded and shady) stroll along the river bank.

Within another 20-30 minutes we were down on the river bank by the famous stepping stones below and looking back up at where we’d just been.

If you’re thinking of going here for a day out be aware however that it’s quite undulating along the river and although it’s not particularly challenging if you’re moderately fit it’s also not somewhere to go with a buggy or if you have mobility issues.

It’s a lovely little oasis of wildlife though and there were plenty of birds and butterflies to keep the eyes engaged and interested. 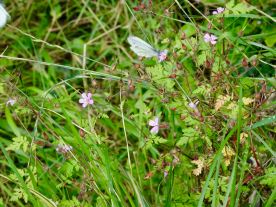 Although we’d originally started along the path to Milldale, the reality was that we’d really be able to do nothing when we got there but turn around and go back, so when we came to Ilam Rock Bridge after a mile and a half, and saw a signpost with a (two mile) path back to Ilam we decided to follow it.

Here the tone of the walk changed a little however. This was a lot more ‘woodland’ than ‘river-bank’, and after a short while onto the opposite bank we came to a foreboding sign…

How bad could it be though? We were already conquerers of Thorpe Cloud!

We tutted in the face of adversity and made our way up the muddy slope. After a few minutes on the way down a couple passed by us, and the slow moving lady bringing up the rear simply said ‘good luck’ as she gingerly made her way to the bottom.

We looked at each other. It was a little steep and muddy…

However – although my heart rate was immediately back up to 140 and it was pretty steep it definitely wasn’t all that bad!

Sure – it was slippery and you had to watch your footing, but the path was clear (if a little close to the edge at times) and there were a lot of railway sleeper steps on the way up, making it a workout challenge – but nothing impossible or dangerous if you were careful and took your time.

Before we knew it the steeper section flattened out and we were on a relatively gradual incline winding our way through the trees at the top of the valley and heading back along the river at a much higher elevation. 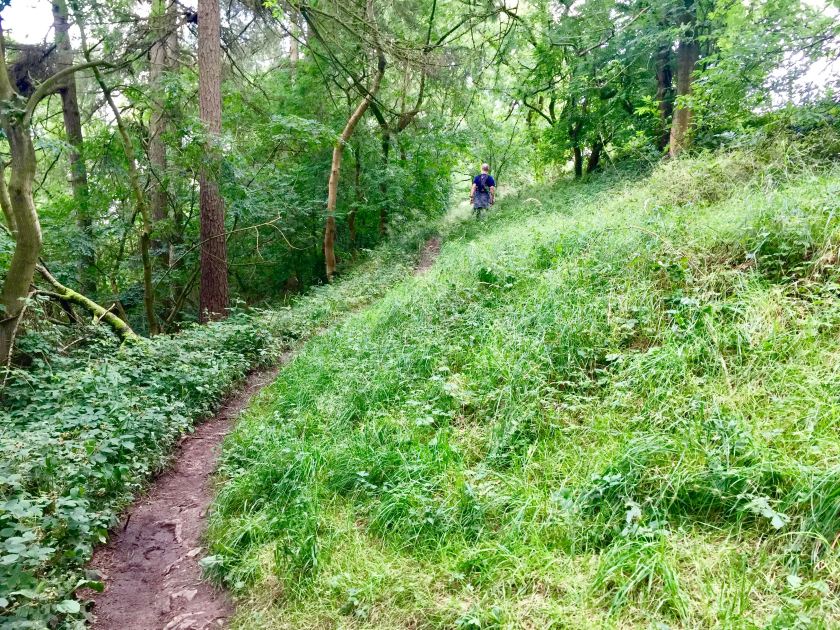 This went on for a while, and then all of a sudden we were back out in the open and looking at yet another absolutely smashing view!

Following the path (now much more rural – winding through open fields and over stiles) we were soon faced with surprisingly static sheep – who were standing completely still and just watching us get nearer and nearer.

I’m not sure what was going on up on that hill – but the sheep on the right was taking more than a passing interest in the sheep in the middle. However – as the saying goes, what happens in Dovedale stays in Dovedale, and who am I to disturb any of their high altitude pleasures?

After a very steep descent (thankfully on grass rather than rock and mud) we were soon in sight of our objective and could just see the tippy top of Ilam Hall in the distance. 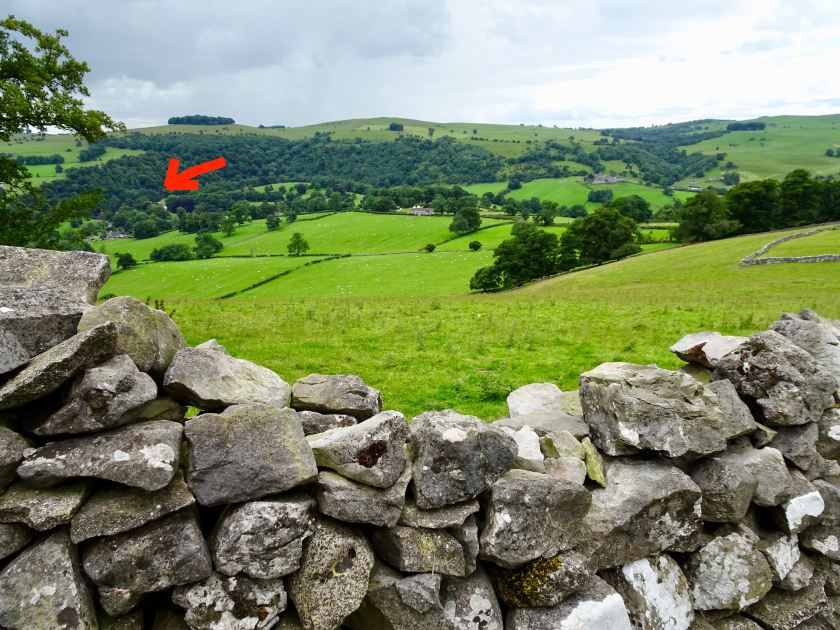 There was still a good quadricep workout ahead however – and after about 20 minutes of burning thighs we were back on level ground and once again (after a little more walking) at our starting point.

My friend uploaded a (frankly exceptional – I’m totally in love with his GPS and love the flyby in this link) video to show our walk time, elevation and route. If you’re interested in replicating it then this will most certainly help!

I wish I’d been able to do this with Snowdon last week!

When we arrived back at the Hall thankfully there was a cafe, and an opportunity to sit down – which we both did with a nice cold drink. 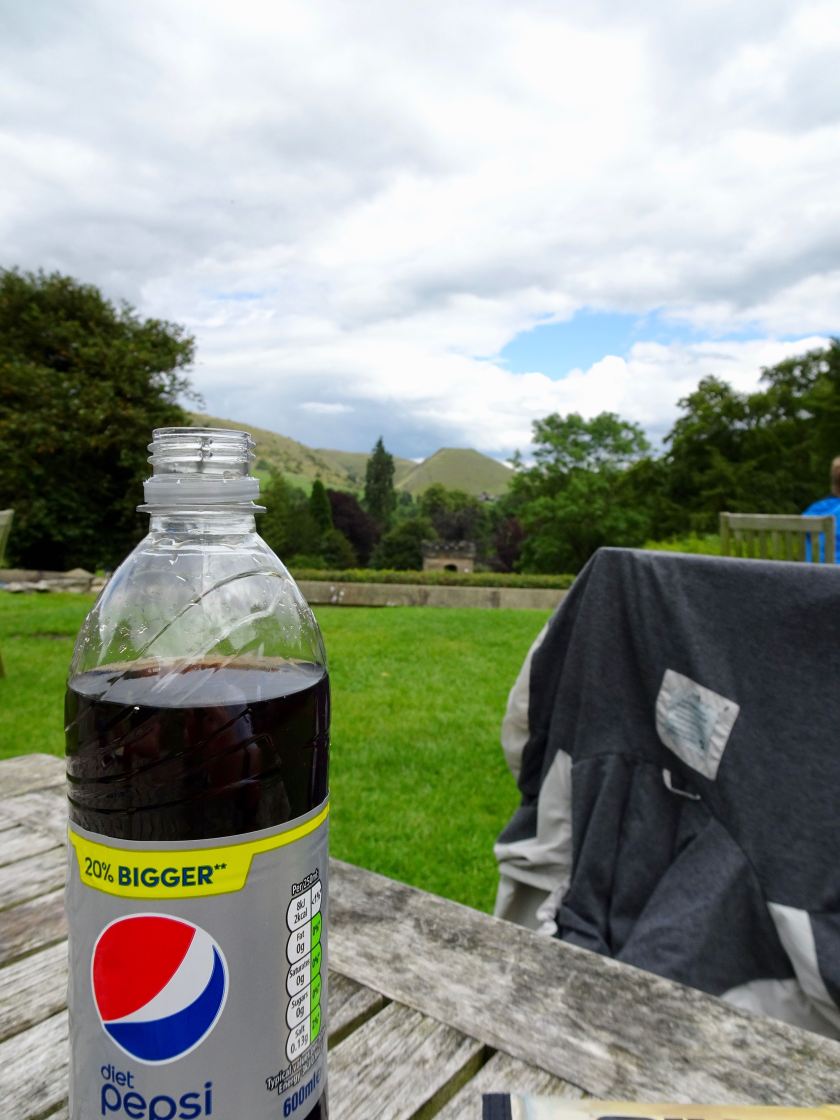 I couldn’t help but feeling we were being watched however. It was if the local residents wanted something from us…

There were robins, sparrows and these mean looking guys all over the place – waiting to hoover up any leftovers. I’m not sure who spent the most time watching who!

Frankly it was the perfect end to a perfect day out in the Peak District.

There will be more of that in another post!

I haven’t posted a weight loss picture for a while - as it’s fair to say that for one reason or another I’ve struggled lately. However - after some flipping hard work and a positive turn of events this year I feel like I’ve turned a corner. I think my mojo is back and I’m once again heading for my target weight. Hopefully I can get back to it (top of range with my current target is 15st 3lbs) in time for my 2nd anniversary of originally hitting target! #slimmingworld #slimmingworlduk #slimming #fitnessmotivation #fitness #healthylifestyle #healthyfood #healthyfood #foodoptimising #diamondtargetmember @angie.slimmingworld
I don’t normally post pictures of bags - but my fellow geek and partner in crime occasionally buys items on Etsy that really float my boat. This bespoke, one off handmade Star Trek bag is fudding superb!!! (Details of the maker on the last photo) #startrek @tarniacherrett
Had my flu jab today. I was a brave little boy. 😥 get yours and be safe. Or if you believe the conspiracy nuts join the Illuminati’s mass sterilisation programme and make sure you don’t impregnate anyone. 👍🏽
What on Earth was wrong with the sky today? Isn’t it supposed to be grey and filled with water?! ☁️ 🌞
I do love the geek statues and busts in collectors assemble - just wish I had unlimited disposable income!
The wonderful world of Victorian stamps 🤔
I’m sensing anger about the ‘accidental’ fire and subsequent redevelopment of this site.... 🔥🔥🔥🤔
2019 is nearly at an end - and while I could take a moment to talk about losing weight and how my Slimming World journey has gone there’s something waaaay more important that resulted from it - and I don’t need any words. I just look back at the smiles and remember every time I held hands with the person who’s become the centre of everything. Here’s to a lot more happy memories and a wonderful 2020! Have a great new year everyone 🤗
#maths #sprouts #tesco
Oh my word - although far from syn free we decided to try another way to do mince pies. These are milk washed weight watchers wraps with grated apple, cranberries, and mincemeat rolled into them before being oven baked for 15 mins till hot and crispy. The topping is vanilla Muller Light 😋😋😋
10 miles of body magic in the muddy but glorious countryside and sunshine of Warwickshire in Christmas Day #slimmingworld #slimmingworlduk #slimming #fitnessmotivation #fitness #healthylifestyle #healthyfood #healthyfood #foodoptimising #diamondtargetmember @angie.slimmingworld
Christmas Star Wars cufflinks!!! 😱😍🎅🏻🎄🎁