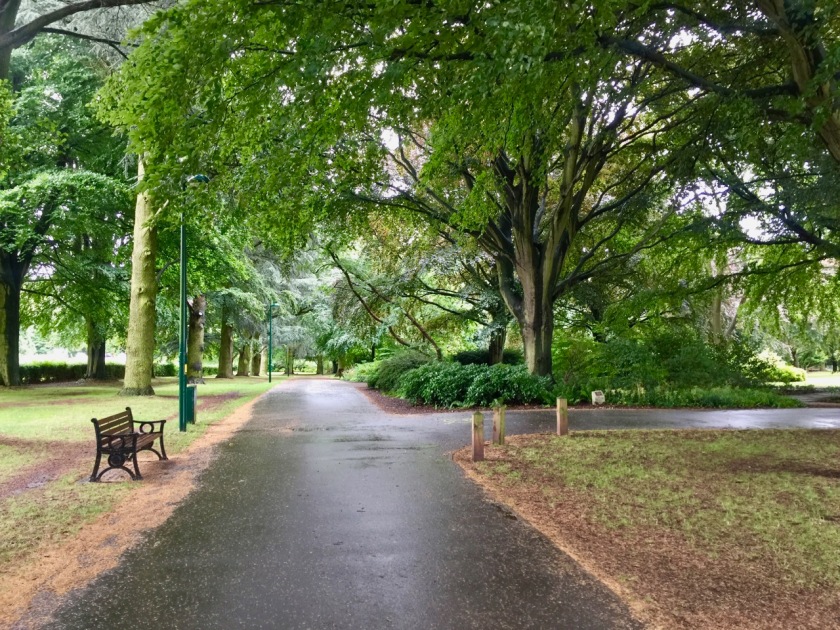 Boris is getting fitter.

The poor little mite’s suffered quite a bit of late with some spinal pain and has been seeing a doggy therapist. With some physio he’s managed to progress from yelps of pain when moving to a noticeably more bouncy gait as he trotted around the park and today, as I walked sedately with my friend in the rain he seemed really rather happy.

Well – as cheerful as a dog with a largely expressionless face and permanent frown can look.

It’s all contained in the eyes and ears with Boris.

He can’t wag (he has no tail) and he doesn’t pant or open his mouth much – but after a while you can definitely tell when he’s in a good mood. His ears swivel slightly, his eyelids lift a little and when he likes you he sits on your foot to keep his bottom warm and dry.

I also like walking in the rain – which is fortuitous because the only way we were going to get any exercise in Memorial Park today was under the cover of umbrellas.

The absolutely best thing about weather like this is that the world looks truly lovely. It’s all fresh, green, and you have it to yourself.

I really felt like I had to do more than normal today.

I needed to somehow be faster, go further – or to climb something. This is mostly because currently my appetite seems to be swinging back and forth like a pendulum and exercise appears to be the only way to suppress or control it. I appear to be alternating between moments where I’m ravenously hungry and days where I don’t think of food at all.

In both instances I’ve been trying to make good choices – because I’m increasingly aware that in a couple of days I weigh in for the first time in two weeks and I’m more than a little nervous about what the result will be.

So much so that as soon as I got home I immediately hopped on my exercise bike whilst chatting to my dad who sat nearby. He’s staying with me for a few days at the moment and I’ve been trying to gently persuade him that he should get bike of his own.

I (much to my surprise) managed to convince him to hop on my own after I’d finished and showed him via the wonders of a heart rate monitor and the readout on the bike what kind of activity he would need to do to burn 100kcal.

In my Dad’s case, freewheeling on the bike with no resistance for 15-20 minutes or so did that.

I then showed him the kcal values on the food he’d just been eating and together we began to join the mysterious dots between energy consumed, energy burned – and finally energy stored. It sounds really obvious – but until you realise exactly what it takes to burn off a bag of tasty crispbreads you’re unlikely to think twice about putting them in your mouth.

It worked for me – although it took quite a while to face up to the painful reality of this – but when you do it’s a great way to motivate yourself to eat more filling foods with a lower salt, fat or sugar content.

In my own case nevertheless I’m still unsure what will happen on Saturday.

On paper the results should be good. I’ve done a lot of exercise (I burned 5500 kcal climbing Snowdon alone) but that in itself doesn’t necessarily mean that my weight will go down. Sometimes the opposite has been true – and radically increased workouts have occasionally resulted in static figures on the scales.

Needless to say at the moment (because I’m preoccupied with this) vegetables are very popular in my house. I’ve been having lots of salads, stir fry vegetables, fish, lean chicken, fresh fruit and basically anything that’s speedy or free on Slimming World’s plan.

There are some days though where the cooking is out of your control – and you are at the mercy of an unknown chef in an unknown place. All you can do then is make educated guesses and hope for the best.

Unusually I texted my Slimming World consultant tonight because of this and asked for help. There was a family meal planned at a nearby Peking and Cantonese restaurant (The Emperors in Leamington Spa) and I’ve hardly eaten out at all in place like this since I started my plan last April.

She was (as always) very helpful – and as well as a few personal tips directed me to a members only part of the Slimming World site (which I’d missed by not logging in) that gave some low syn suggestions for eating out:

Armed with this info I ordered a ‘sizzling chicken and black bean sauce‘ from the menu when I got there, along with some steamed rice.

Frankly it looked lovely when it arrived with all of the other food, and thankfully tasted just as delicious.

Everyone seemed to agree that whatever they’d decided to order was cooked to perfection, and apart from some rice being left on the table (there was a massive bowl to share) everyone’s plate was clean by the end of the night.

The only thing left was to indulge in something naughty – so we called for the drinks list.

When it arrived I scanned quickly up and down. My favourite wasn’t listed!

I asked the waitress.

She nodded knowingly and scribbled on her little notepad.

I needn’t have worried. They were prepared for my one remaining vice!

Everything is right with the world when you add coffee.

It’s also right internet when you manage remain on plan – even when you feel like eating the furniture in an unfamiliar setting. It’s even righter-er when the evil little chocolate mint that they’ve given you remains on side of the saucer as you walk away with a self satisfied smile on your face.