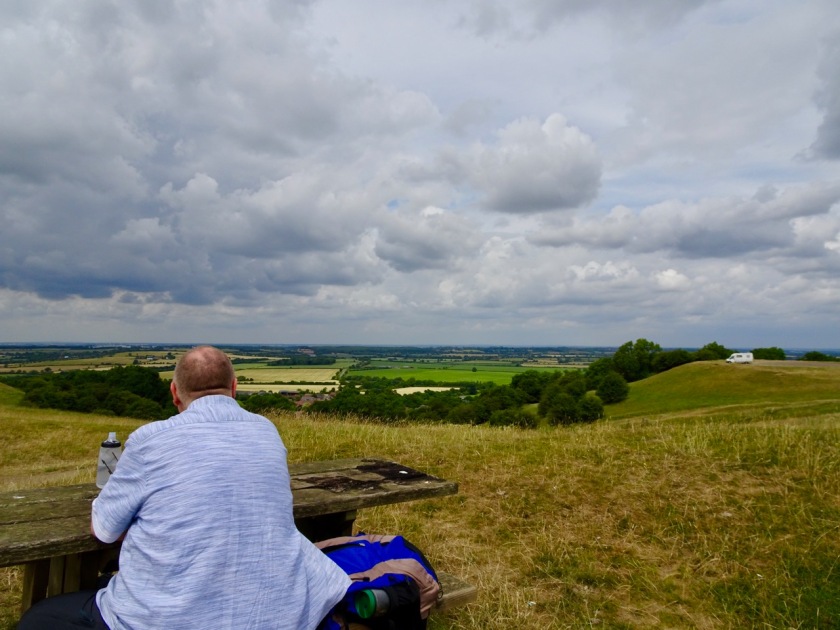 It seems a bit odd to me as I type it but somehow almost half a year has passed since I last visited Burton Dassett in February (link). Back then I was beginning to think of inclines and was already mentally leaning towards what I’d eventually need to be capable of when it came to climbing Snowdon (which is not far away now).

At the time I’d just tipped over the 10.5 stone lost mark at Slimming World (I’m almost at my 15 stone award now) and felt pretty chuffed that it took only 16 minutes to get to the top – where I took a selfie.

More of that later.

Today my companion and I parked much further away than my last visit in the rather picturesque Avon Dassett. Looking very similar to Ilmington where I went for some hill practice two weeks ago (link) it’s an absolutely delightful sleepy little sandstone village.

We planned to follow the green dotted line through fields past the parish church and via fields of sheep to the blue flower shaped viewpoint near the landmark beacon. We would then head into Northend and take the walking route to Fenny Compton through the surrounding fields then loop back down on the right along the road to the starting point – around 7 miles away.

The weather today was quite overcast – but occasionally there was a break in the cloud and the sun peeped through. Thankfully however the rain held off (probably just to spite me because I brought my waterproofs just in case) and although it threatened a downpour a few times it never materialised.

Today neither of us were in any rush – and we took our time to explore. If a place of interest popped up then we had a look. If it took a little longer then who cared? We were in it for the pleasure of exploration and wandering through fields today.

Just like the last time I visited we stopped along the way for a mooch around the All Saints Parish church – which I featured in my blog before (link) so I won’t go over again. There’s a lot of history there and as I was with a different companion last time I felt myself compelled to let my current one have a look at the stories it contained for herself.

I thought that such an experience would be hard to top.

I know how to show a lady a good time – and pushing her into a dusty church talking about death watch beetles tunnelling through the walls seemed at the time unbeatable on the fun-o-meter. However my friend is the competitive type, and after retreating into the nearby toilets at the beacon viewpoint she returned (almost skipping with glee) with photographic evidence that topped any ecclesiastical structure mentioned in the Doomsday book.

She’d just had the envious pleasure of planting her posterior on and tinkling into a toilet inside the LOO OF THE YEAR 2005. 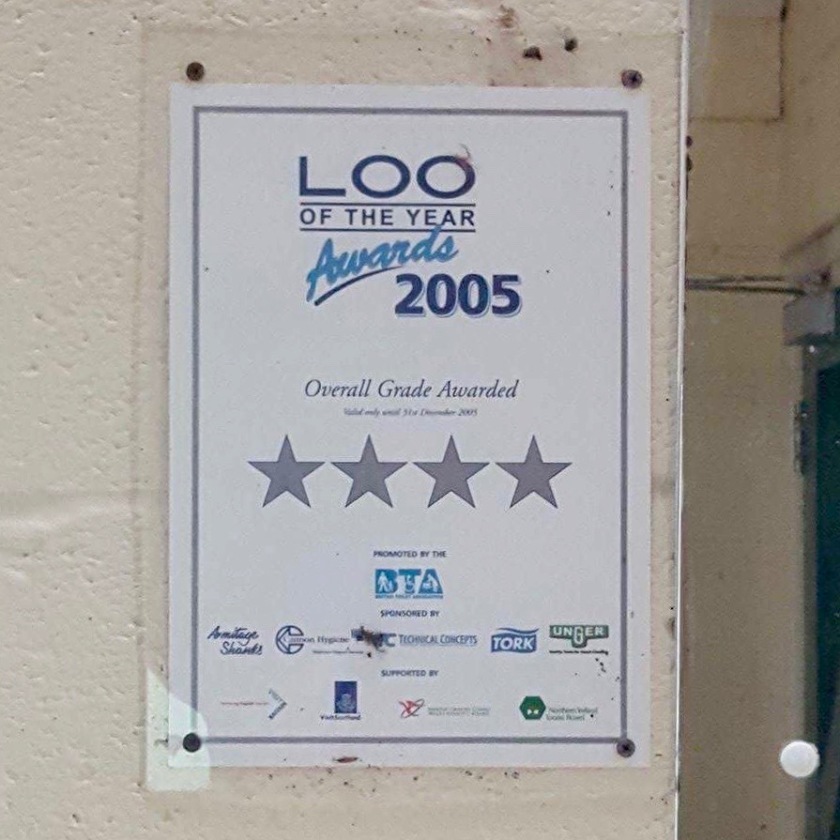 Those who were involved in and remembered the titanic battle for the this prestigious and coveted award must have felt justifiably proud when their local WC hit the big time. Twelve years on this pride is still burning brightly in the 2005 loo of the year and the poster remains mounted behind protective perspex to ensure that past glories are not lost from the annals (correct spelling) of history.

It’s one of the many times that being a man has worked against me – and I again today fell victim to the blind cruelty of gender bias. In my nearby hilltop urinal there were cobwebs from over a decade ago, and a couple of ancient looking toilet blocks – but no certificates.

The only thing that would cheer me up was a gratuitous selfie.

Although it’s not a massive change compared to my starting weight photos – I’m still pretty happy with the difference between February and now – which I can definitely see around my cheeks. There’s almost four and a half stone lying in a gutter somewhere and I don’t miss it at all.

Going up hills without it today was noticeably easier.

This by the way is a fantastic place to stop for a bite to eat. You can see for miles and miles around.

I’ve been attempting to be careful with food this week (I want my 15 stone certificate on Saturday) and have been trying out rice as an alternative to some of the meals I’d normally have while I’m out and about.

Although I’m not interested in going vegetarian I’ve been consciously trying to reduce (but not cut out) red meat in my diet so that I focus more on oily fish rather than harder to digest lumps of protein.

Basmati rice, prawns, mackerel and gherkins may sound like the devil’s work but I assure you (unless you count my endless capacity for churning out farts after eating anything these days) that it isn’t and that it’s totally delicious (plus not too filling during a walk.) 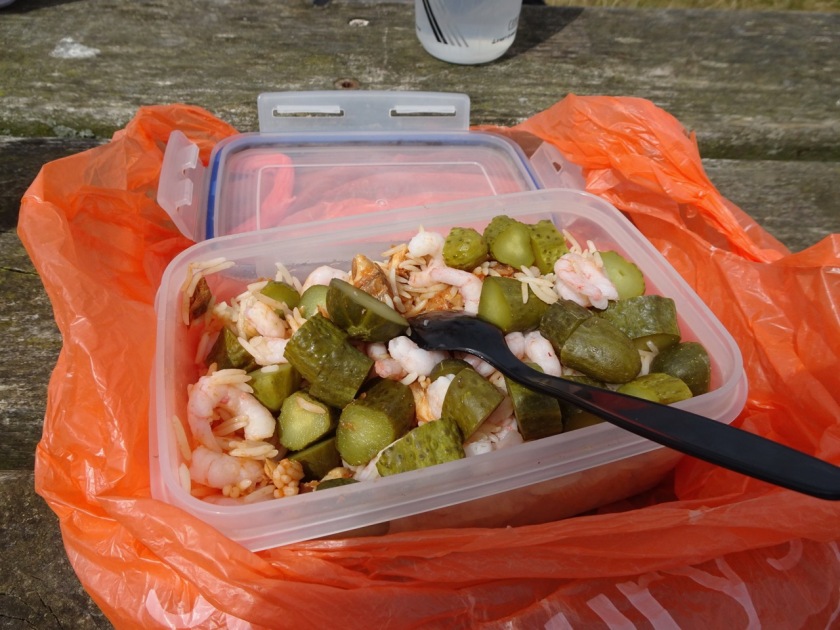 After a bite to eat we continued exploring and nearby noticed a lovely little coppice called Fox Covert -which was a small 1/4 mile wooded circular wooded walk near to the monument. We decided to have a look around its totally deserted paths – and it was like stepping into a cocoon.

Once inside the noise and wind of the outside world instantly disappeared – and all we could hear was birdsong above us in the leafy green canopy.

After a short while wandering around here we continued on to Fenny Compton, leaving the loo of the year 2005 behind and making our way through some fields of cows – where my companion learned the hard way that it’s best to look at the floor rather than the view while walking through long grass with bovine neighbours.

Thankfully the cow-mined no man’s land soon opened out into a wonderful whispering sea of wheat – and the path began to wind along the tractor lines left by the farmer. 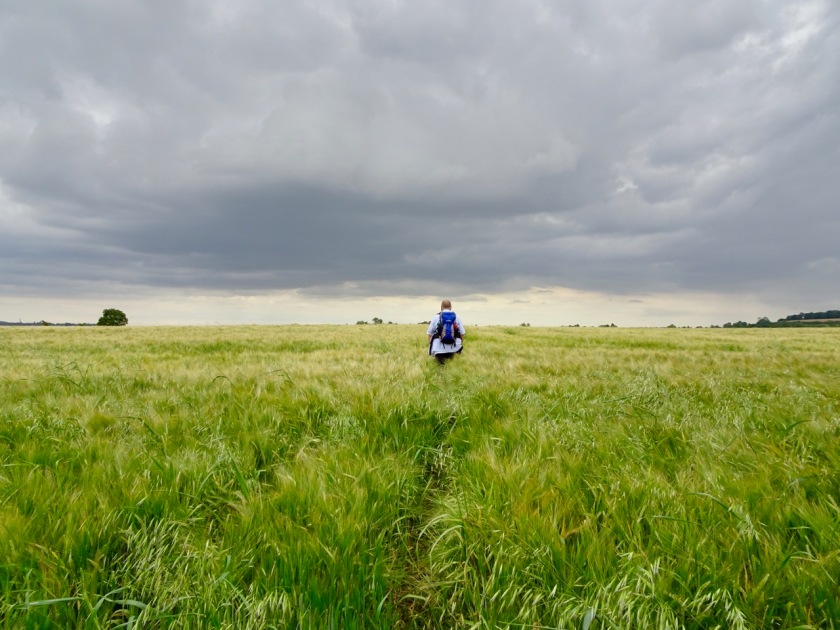 Although often people want blue skies as opposed to grey there was something about the skyline today that looked dramatic and had a continued ‘presence’. It wasn’t too hot, we were never short of a breeze and there were even occasional splashes of colour with flowers popping up in the hedgerows and hilltops. 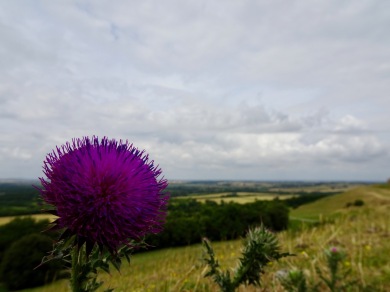 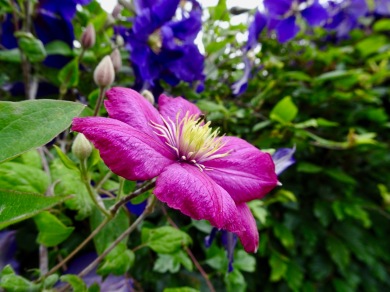 However – when we got back to Avon Dassett there was another treat. This small village houses not one but two churches. One of which (at the start of our walk) was locked up tight – but the second (Church of St John The Baptist) was open.

It also looked smashing from the outside. Easily better than the Loo of the year 2005. 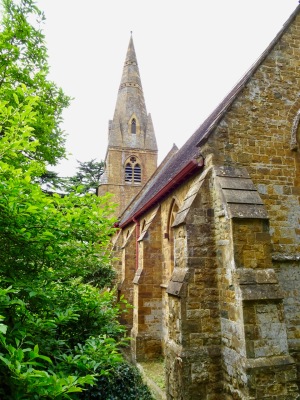 However, upon stepping inside we realised that the church seemed completely unused. There was a thick layer of dust on almost every surface and stacks of roof tiles and bricks in the corner.

It looked like there hadn’t been a service there in a long time – but oddly it was in infinitely better condition (built in 1868-89) than the nearby All Saints (first recorded in the 1087 census) and according to the signs had recently been refurbished.

Although I have an affinity with buildings like this I’m not entirely sure about the wisdom of repairing (at great cost) something that people no longer use or appear to love. The cobwebs and dust that layered Bibles, red velvet prayer cushions and images of the crucifixion seemed profoundly at odds with the (clearly amazing) work that had been undertaken to repair the ceiling and stonework.

I left feeling conflicted – and wondering whether such buildings should just be listed and allowed to be re-purposed into homes or business premises like they have been so successfully elsewhere.

I still remain undecided. If it had been I wouldn’t be able to pop my head around the door and have a mooch – but then if it hadn’t someone wouldn’t have wasted millions on something that no-one seems to want anymore.

Either way – I enjoyed my walk and look around.

Finally – whilst indulging in a post walk coffee I asked my friend to take a final photo for the day for my ‘about’ page. It’s of me, sitting in my natural habitat (Starbucks) and to provide a contrast to a super heavyweight photo (taken in the same chair and almost the same place) that I’ve been using for ages now to show just how bad things got for me.

The new one shows me in the same seat 16 months later and almost fifteen stone smaller.

You can see it here internet.