Yesterday was an empty day.

After a wonderful night out with ex colleagues on Thursday culminated in an unusually late night (I fell asleep in a Diet Coke related heavily caffeinated state after the sun came up on Friday morning) I really didn’t feel like doing anything of consequence.

Caffeine wasn’t the only thing keeping me up though. I was buzzing after seeing all of the people I used to work with. They’re alsolutely they best sorts (link) and when we get together it’s like no time has passed at all. We spent the whole evening catching up and I talked the night away until 3am before finally making my way home, tired but very happy.

It’s one of those moments when you’re reminded that you can be as poor as a church mouse but rich in terms of friendship. Long may our reunions continue!

Consequently I mostly spent my time dozing off in the middle of things yesterday – and in the absence of Apple Watch didn’t feel in the least bit guilty.

I have missed it terribly however – and called Apple yesterday to see what was happening. They’ve decided to replace the entire unit and a new one is hopefully going to be with me by the 10th.

I can’t frikkin wait as I’m sure I’ve done less without it watching me. Overall it’s been a good week for activity though – so honestly I felt it was ok to take my foot off the gas a little.

The problem is that it in doing so (even though it was only for a day) I was consumed with fear just before bedtime that I’d ruined any chances of a good loss at the scales this weekend.

Thankfully that wasn’t the case, and after a good 2.5lb loss I’m firmly back into the teens!!!

To say that I’m happy would be a vast understatement. I was so worried that I’d be above 20st again this week that I dreamt about potential failure last night and woke up panting and sweating.

This particular milestone is no small thing to me and I need to cling onto it for all I’m worth.

Honestly I’m mildly amazed sometimes that I’m still in the zone and feel like this about losing weight 15 months on from when I started.

I still really really want (need) to get to my target weight even now, after all this time. It’s simply inconceivable to me that I won’t do it. My brain will no longer accept failure as an option. I’m getting down to 15 stone (my current goal) by hook or by crook.

I’ve only got another 2.5 lbs to go and then I hit the 15st lost mark – but as I said in group this morning it’s less the increasing numbers in certificates that are motivating me lately and more the task of decreasing the ‘teens’. Being in the 19st bracket is great – but it’s just a staging point to hop into the 18st arena.

It will happen though – and within reason I’m in no rush. As long as I keep making progress I’m happy. There are other things in the meantime that make me happier.

In my continued quest to pick up items for my Snowdon climb I popped into a great local ski and trek shop in Leamington today called Lockwoods (link).

The last time I visited them was October 2016 (link) and at the time I was incredibly impressed that they weren’t trying to fleece me – just give me the best possible advice.

One of the owners is also a fellow Slimming World’r too – so I know I’ll be in good company there!

Today I found (what I consider to be) an absolute bargain in their walking trouser department -which goes up to a 44 inch waist (unlike all the other outdoors shops I’ve tried). In their reduced items were an absolutely wonderful pair of Berghaus walking trousers (with stretch!) for £25 in a 42 inch waist that fitted like a glove!

I know it’s just a number – but I started out wearing a 66 waisted pair of trousers and I’ve lost 24 inches to get to this point.

(That’s 60cm for all my Euro-friends)

To put this in context my friend is four months pregnant and my old belt not only fits round the both of us but it also does up!!! So – as well as losing weight this morning (and no longer carrying a woman and child in my trousers) I view this as today’s most significant non-scale victory.

That’s not the only one though.

Yesterday I summoned up the courage (egged on by a multiple people) to sit in my IKEA Poang armchair without it being propped up against the wall!

One friend took it upon herself to nag me all the way from sunny Wales on holiday – pointing out that I was over 6 stone lighter than I needed to be for it.

Another sent me evidence of his own Poang with one of the heavier members of his family stressing the tensile limits of the bonded wood. He assured me that Vinny (a portly but good natured lover of their Poang) had never had a problem with its weight limit. 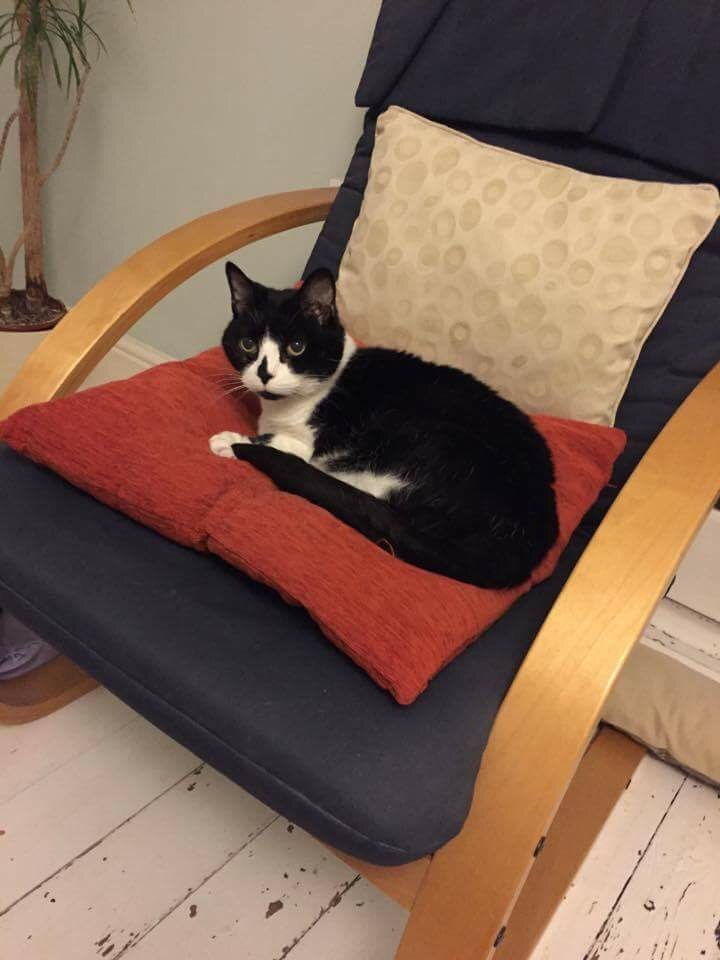 Encouraged by the fact that this feline tubster had managed to cheat the laws of physics I lowered myself into my own very very gingerly.

It creaked a little, and then settled.

I sat perfectly still for a while. I’d sensed a natural predator stalking me nearby (gravity – it’s evil and lies forever in wait) and it was watching me, preparing itself to pounce.

However nothing happened. No cracking or snapping of wood!

So I gently began to engage in the ‘bouncy uppy and downy rocky’ motion that you can’t seem to help yourself doing when seated in one of these.

A little more creaking, but no splintering!

So – after several weeks of terrified ownership I’ve conquered the Poang!

So it’s been a good couple of days. They’ve seen a 2.5lb weight loss, my first pair of 42in trousers, and new territory for my ass cheeks to explore and bounce (gently) upon in the pursuit of perfect relaxation.

There’s only one thing that can improve on perfection internet, and I’m currently working on consuming that right now!