I’ve got Vaseline between my toes and it feels funny.

Although I have my moments this isn’t me pandering to a weird fetish (for a start there are no llamas nearby) but trying to make absolutely sure I don’t get blisters.

At the moment I’m sitting outside The Hatton Arms, rather cheekily sipping my own flask of coffee. Apple Watch says I’ve walked 4.9 miles so far today and it’s 11.42am. Four of those miles have been between Warwick and Hatton along a familiar stretch of the Grand Union Canal – which looks lovely today.

It’s always a pleasure to turn around and see the church in the centre of the town perfectly framed by the line of the canal.

I’ve a long way to go though.

Today I’ve decided that no good mood or great result on the scales comes because I sit around waiting for it.

I’m pretty sure that the battery on my Apple Watch won’t make the distance to the train station at the other end if I run the battery sapping workout programs – but we’ll see. It’s at 72% so far and it’s going to need to monitor me for another 11 miles.

(Author sips coffee for a while.)

Right. Better get moving. My next stop is The Orange Tree in Chadwick End and that’s 4.7 miles away along the usually fairly busy A4141 (the Warwick Road). Thankfully there are paths. I made a mental note of this the last time I drove that way with just such a walk in mind.

My Apple Watch workout is reporting a walk of 4.65 miles and the poor little thing’s battery is at 42%. It’s flagging.

I totally get how it feels.

My feet and thighs are aching and although the Vaseline between my toes appears to be doing the trick the ball of my right foot is complaining a bit. I’m pretty certain that’s going to be a blister there by the time I’m done. My legs are pretty tired now so I’m going to take a while to relax on their comfy looking patio furniture and hope they don’t complain that I’m not buying anything.

I’m quietly sitting outside with my lunch. It’s microwave basmati rice (2 syns) with prawns, tuna, a can of mackerel and some gherkins.

I realise that I’m winning no culinary awards for composition or presentation here – but it’s cheap, (the whole lot is around £2) represents around 7-800kcal, has carbs as well as protien and also some ‘speed’ food in roughly the correct ratio. It’s my breakfast and dinner combined.

Honestly though – I was in a hurry and It took only two minutes to sling together before I left the house!

The next leg of my walk is mercifully shorter – around 3.3 miles to the Toby Carvery in Knowle. Unfortunately some of it will involve walking on the road as I know there aren’t any paths between Chadwick End and the Black Boy pub – which is the easiest place from where I am to hop back onto the towpath of the Grand Union Canal.

You may ask why I didn’t walk the whole way along the canal – and it’s a good question.

Some years ago I walked from Warwick to Hatton for a coffee with a friend and then she suggested we carry on to Knowle. The experience (although I was with great company) was miserable for the second leg of the journey – 70% of which was along overgrown, boggy and boring towpaths which were not well maintained at all.

At the end of it one of my toenails fell off and my beloved trainers (almost brand new) went in the bin. They were completely wrecked.

This is the primary reason I’ve done part road and part canal, but also because it’s shorter.

Right. I’ve had an hour’s break. It’s 2.33pm and I’m going to sneak into the pub toilets for a wee before heading off.

(Author points Percy at the porcelain briefly, starts another workout on his watch and heads off.)

It’s now 4.10pm. I’m lying on the grass outside the Knowle branch of the Royal British Legion about 50m down the road from the Toby Carvery. It’s quieter here and I can just chill without getting any attention. 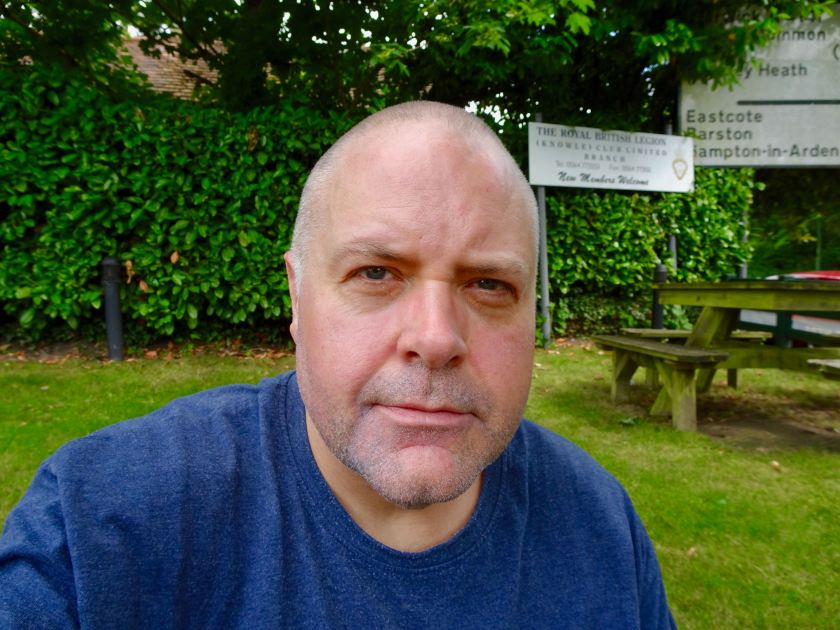 Apple Watch is on life support at 16%. If I don’t kick off another workout it may just make it home. It’s another three miles to Solihull train station, and then another mile from my stop in Warwick back to my doorstep.

My feet and legs are really aching now – but this is totally doable. 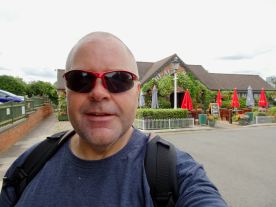 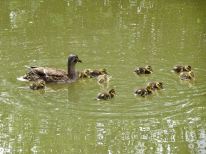 The last leg of the walk was quite nice – and took me along a lovely quiet stretch of canal and a set of locks leading up to the Kenilworth Road and Knowle church. I couldn’t help but pop in and have a look. I’ve driven past many times but never been in.

There’s some absolutely gorgeous masonry and stained glass! Despite my continued lack of interest in anything spiritual I’m still always blown away by how beautiful these places of worship are. The craftsmanship they required to build is something I doubt we’ll see the like of again any time soon.

However for once I’m not going to swamp this post with religious iconography. I have lots of selfies to pack in instead!

(Author moves on toward Solihull without a workout program. It’s a less than enjoyable stretch of busy road that goes over the M42 and through the outskirts of Solihull on the way to the train station. On the way my watch alerts me that its reached 10% and asks me if I want to go into power saving mode. I don’t. It won’t track my progress.)

Well I’m once again STUNNED by Apple’s customer service. Particularly this guy – Adam (who unfortunately looked away as I took this – but said it was ok to add him in my blog) 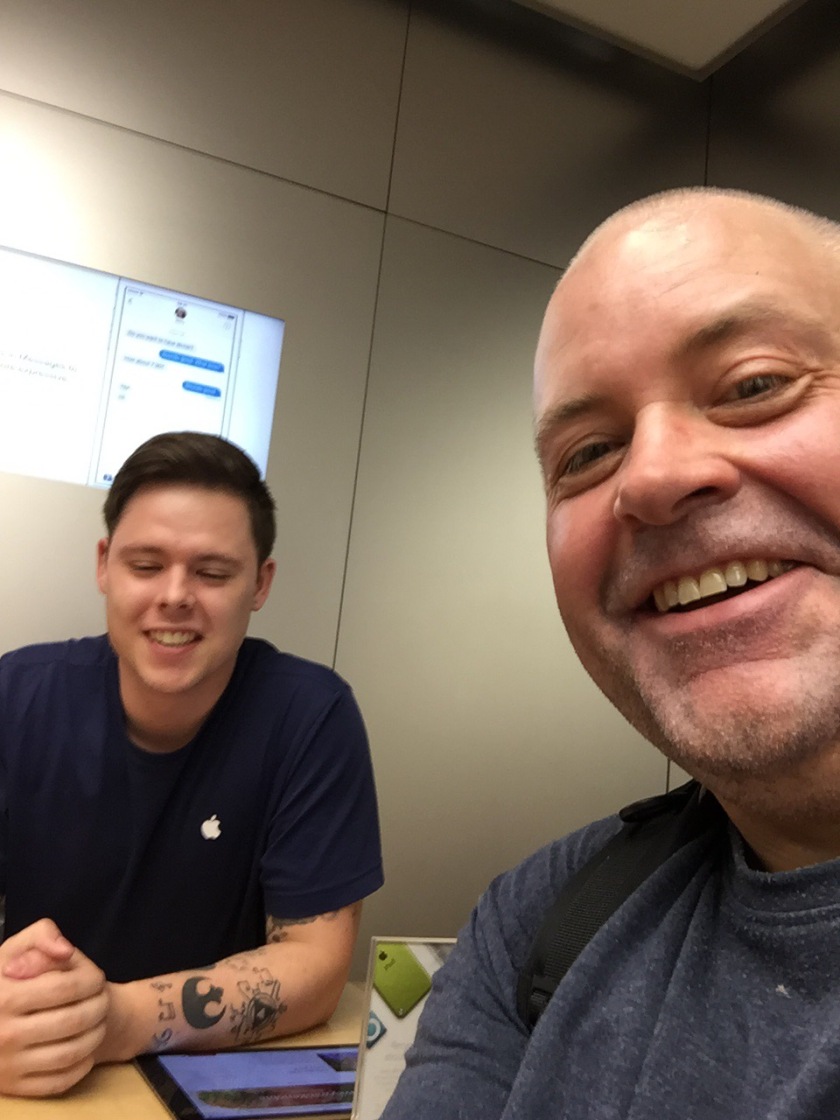 I’d gone into the Touchwood Apple Store in the hope that I could charge my watch (by that time it was at 7%) in there and keep my stats going.

They were very accommodating – and as it sat sucking up power at the Genius Bar I began chatting with the guy who was helping me. I explained that I’d walked from Warwick – which surprised him quite a bit. I elaborated some more and mentioned my weight loss so far, showing him my blog.

He politely had a look – and while he did I told him how (in many ways) how Apple Watch had helped make all of this possible. It kept me focused and on point. There was no hiding from its data collection (at least when it wasn’t completely drained of power.)

I told him I’d be lost without it.

I also reflected that the little guy was getting on a bit now and that I’d noticed the sensor on the back had begun to move when I cleaned it. I said it was probably only a matter of time before it died. I probably couldn’t afford to replace it.

He looked perturbed. He’d mentioned to me his own fitness goals (he was trying to improve his distance running) and he really wanted to help.

‘That might be covered under consumer law’ he said – and started tapping on his iPad.

‘Yep. It’s covered.’ He said. ‘We can repair that for free and send it back to you. It will probably take about three to four days.’

I’ll be honest. Despite this wonderous miracle initially I didn’t want to let it go. The little fella goes everywhere with me. I’m literally attached to it. However knowing I could keep it alive a bit longer (and maybe even get an upgrade if it can’t be repaired) was too tempting an offer to pass up.

‘Ok I’ll go for it!’ I said. After taking some details from me and filling in all the forms (a £165.83 repair suddenly became FREE on his iPad) I shook him warmly by the hand.

What a nice guy!

I’d walked 15 miles to get the best customer service possible – and it reminds me why I keep on choosing Apple products again and again. Sure there’s a cost associated with it but there are some things in life that are just worth a little bit more!

So now I’m in Starbucks without stats, and I’m also without my watch for several days. The next train from Solihull station is in 40 minutes. It’s about half a mile from here and at the moment I’m really really looking forward to getting home. 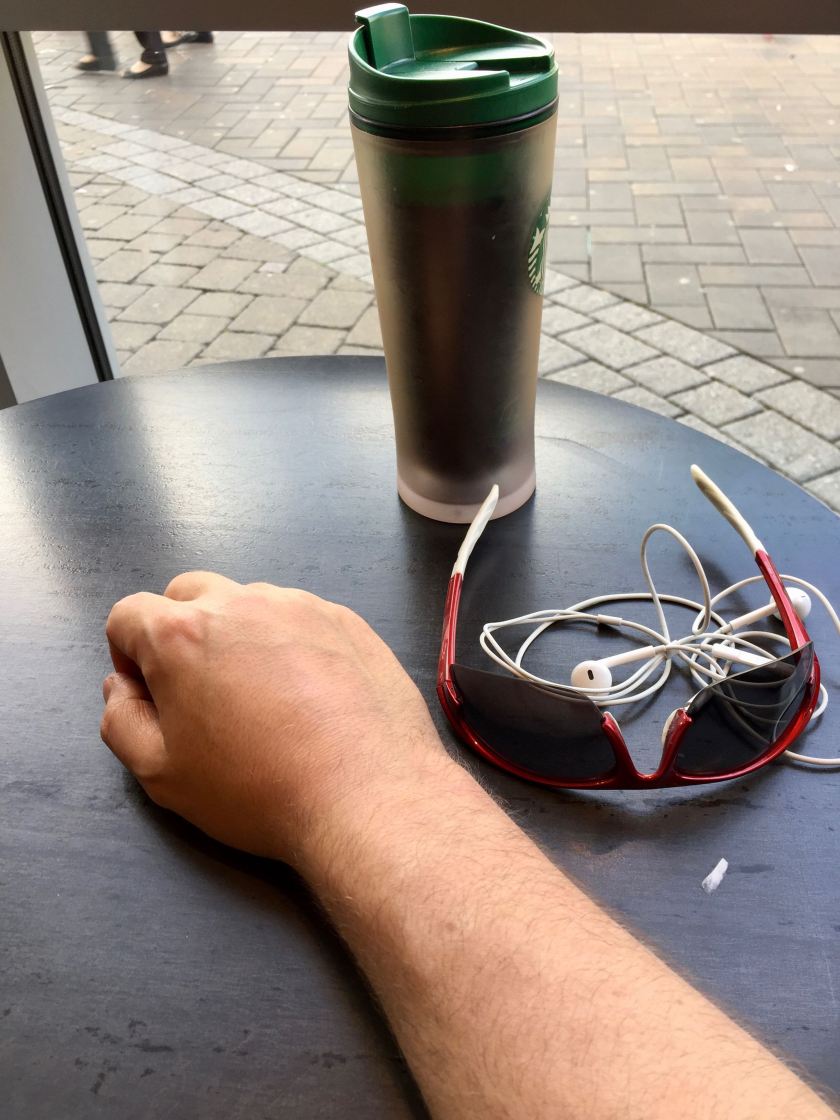 (Author sips coffee and looks at the blank space on his wrist. Feels sad.)

Before I handed my friend over, Apple Watch (waving goodbye with a sad expression on its face) uploaded to my phone all of the data for the day so far. By that point I’d done 230 minutes of cardio, burned a total of 4,266 kcal, mashed my blistered feet into the floor with 27,972 steps and walked 15.66 miles for a coffee. 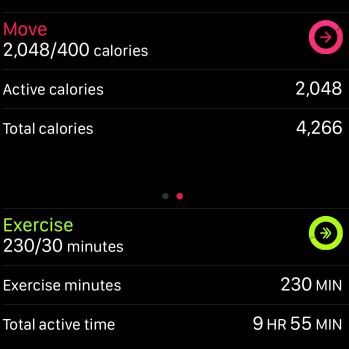 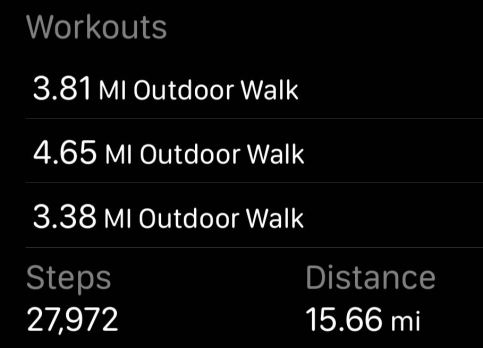 But I’m not done. I still have to get home.

I have an old app on my phone called ‘Walkmeter’ which I used when I first started trying to walk around the park. It’s a bit crap – but it has GPS functionality and I think it will at least keep the distance tally going.

(Author walks to the train station – which is 0.6 miles away.)

I’m now on the last leg of my journey and waiting for the 7.04pm train to Warwick. My feet hurt but I have a real sense of pride that I’ve walked here under my own steam today. I feel sweaty and tired but I’m very happy!

(gets on train, walks home, now limping a little)

I frikkin walked to Solihull!!!

I had contemplated a final picture of the blisters on my feet (both balls of my feet have epic ones – and one of them is an angry blood red.) but I think I’ll leave that to your imagination.

Saturday’s low mood is so far away in my rear view mirror that I can’t see it any more.

I’ve carried my 30litre rucksack the whole way with me today and it’s been full of water (2 litres, refilled once, 4 litres consumed in total), some spare clothes, lots of suntan cream – and basically most of what I’m planning to take up Snowdon.

I can do it. I can go a long distance with it on my back.

I’m SO going to climb that mountain with a vengeance, and I’m going to do it very very soon!