I know now that everyone with cautionary comments about my weight and my plans for running may have been right. It was Thursday evening that I made my first attempt – and today I’m still suffering.

This evening though it seems like the tail end of it – but yesterday I was really struggling. My legs had completely locked up and very unusually I felt like a vacuum had sucked all of the energy out of me. I ended up sitting in a pub for an hour to catch my breath on a two mile walk home from town yesterday and boy did I need it.

After a class of diet coke whilst watching the TV in there I could barely get up again – and when I got home a while later fell asleep on the sofa. I eventually slept for between 12-14 hours (I was occasionally awake in between) and clearly badly needed the regeneration time.

Because of this all I really had planned for the today was to do some grocery shopping and relax.

Or at least this was the plan until a friend unexpectedly popped around for a coffee.

It used to be the case that people I considered to be bad influences were the ones that said ‘come to the pub’ or ‘do you want a cigarette?’ or ‘would you like to supersize that?’. However now my world is very different. Maybe by virtue of being more energetic and upbeat I’ve attracted similar people to me – or maybe I’ve sought them out – but either way I know so many people willing to go for walks or even just discuss exercise and how to do more that it’s difficult to avoid them.

This particular friend is like me. She too craves the digital validation of her wearable fitness device. If it doesn’t tell her she’s been good then its a bad day, and it’s time to do more.

While she was here we discussed our addiction to this particular piece of technology, and also various upper body exercises that we’d been doing to improve our muscle definition. I said that I planned to finish the day on my exercise bike to give my legs a break but she (like the bad influence she clearly is) was quick to say ‘but Dave – it’s looooovely outside. You should go for a walk!’

Irritatingly she wasn’t wrong. It’s been stunning all day – and I was in a great mood.

Part of the reason for my frame of mind was my shopping trip earlier in the day. I’d popped into Starbucks for a coffee because the car park at Aldi was completely rammed at 12.30. There was also a lengthy queue along the road to get in, so I did a u-turn and went for a drink instead. As I sipped my coffee and looked at my watch, waiting for the crush to subside I decided to go and try on some of the clothes in the adjoining Sainsburys TU department and see what had changed due to the last stone I’d shed. 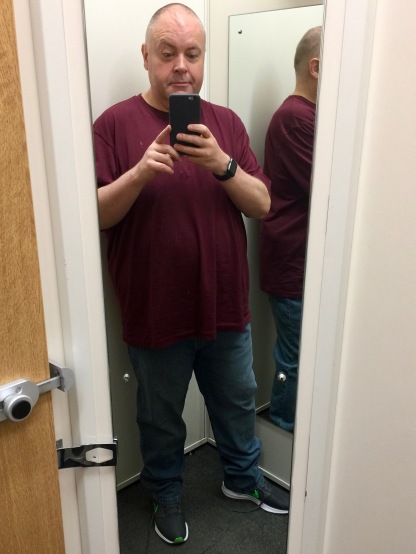 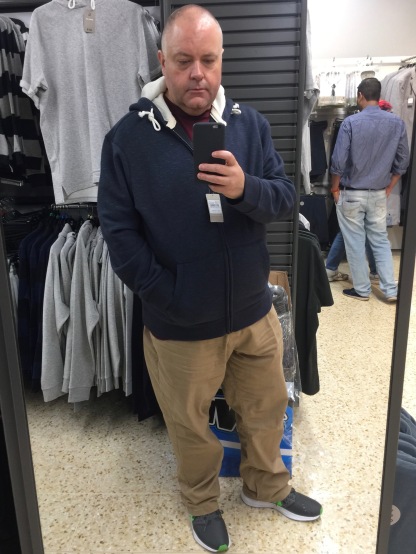 Quite a lot it seems!

I now fit into a 44 inch waist pair of TU jeans and 2xl t-shirts and sports tops.

Oddly none of the the 3xl shirts fit – and seem to be for men with a much smaller stomach – but flipping heck who cares?!

It seems like a long time ago (actually only just over a year) that I was a totally different guy, sitting in the same shop, drinking the same Starbucks coffee – but knowing these items (merely feet away) had no hope of fitting. 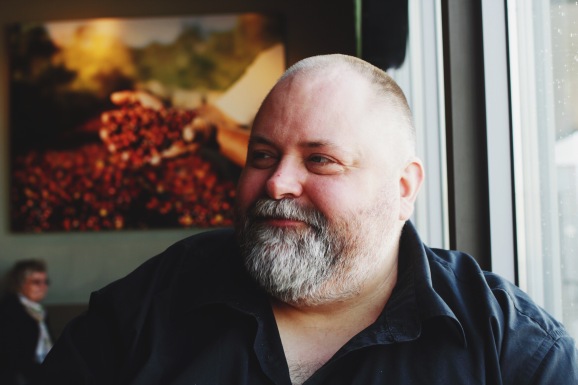 Processed with VSCO with 4 preset 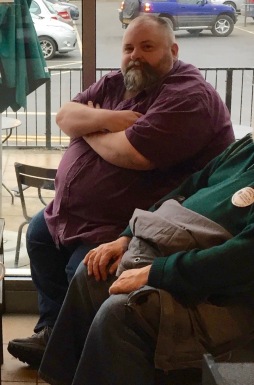 Although these items are a little snug now they are perfectly wearable – and if I had to wear then I could (and would).

To put this into perspective the cheapest jeans I can get from Jacamo.co.uk are £20 a pair and thats only if I buy two pairs to get a discount. The ones from Sainsburys are £12.50 – and have comfortable stretch fabric like the Jacamo ones. Furthermore they’re well made and nice material! The hoodie too (which I really liked) was £16 and that compares to the online alternative of £20.

I didn’t buy either as I don’t really need them just yet – but I’m going back there in a month or so and I’m dropping cash!

Anyway – when my friend left me with the idea of a walk hanging in the air as she skipped off down my garden path back to her car I couldn’t resist – and frankly I’m glad I didn’t. 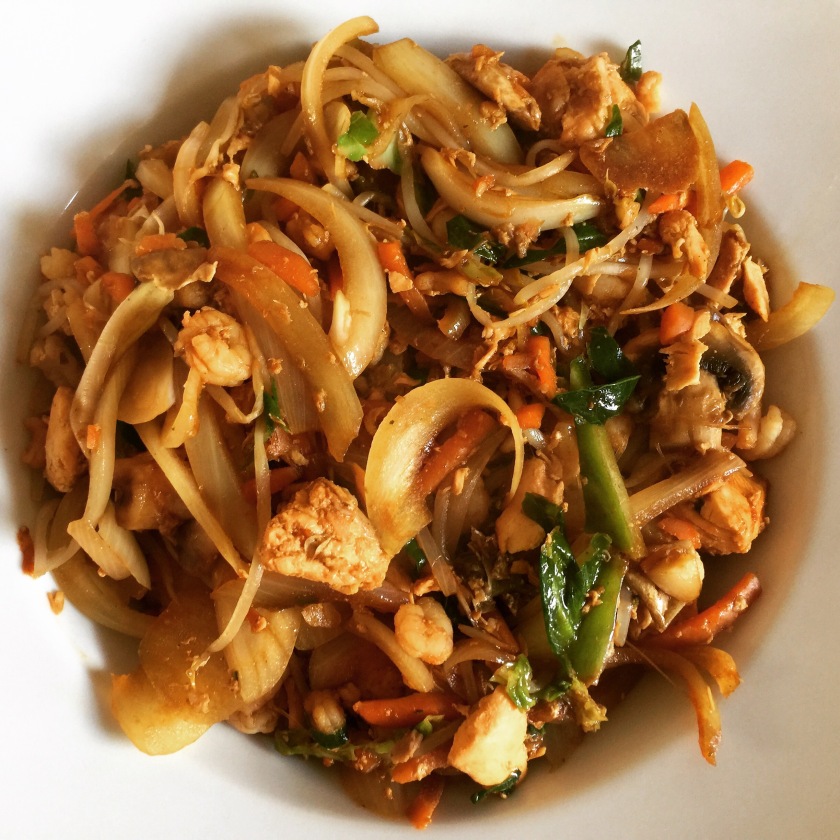 After cooking a quick and light mushroom and onion stir fry with salmon and prawns (seasoned with a veg stock cube and some soy sauce) I headed out to explore and fill up my exercise stats. I eventually did a five and a half mile circular walk through St Nicholas park, Old Milverton, St James the Great churchyard, the Saxon Mill and then back home.

An old work colleague who rows along the river in the morning past St Nicholas and Warwick Castle had spotted a new family of swanlings yesterday (there are apparently 6-7 babies) and I wanted to see if I could find them for myself. Sadly however there were no cute little balls of swanfluff to be seen (just lots of sleeping ducks) but the light in the park was wonderful under the trees! 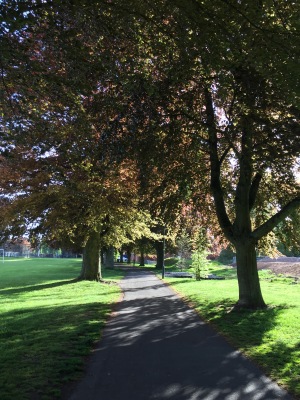 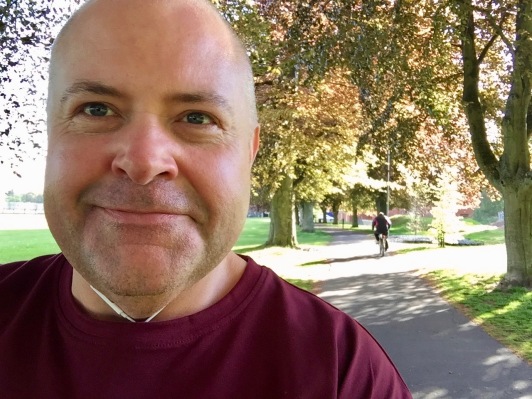 It wasn’t exactly grim by the time I reached Old Milverton and St James either. Since the last time I’d visited there the fields (recently sewn) had become a sea of green. I’m not sure what’s been planted though. Usually it seems to be rape – so I’m expecting all this to shoot up and become yellow – but I may be wrong. 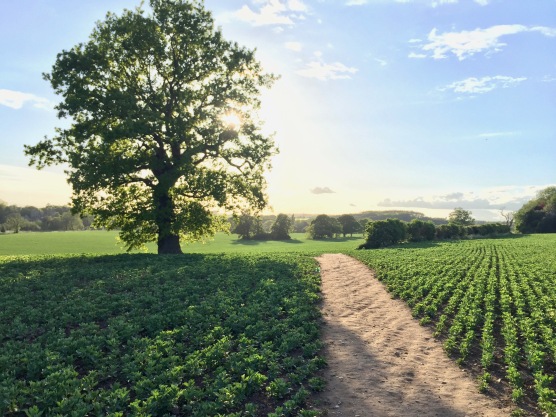 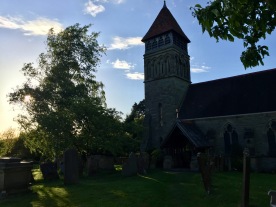 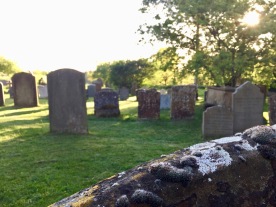 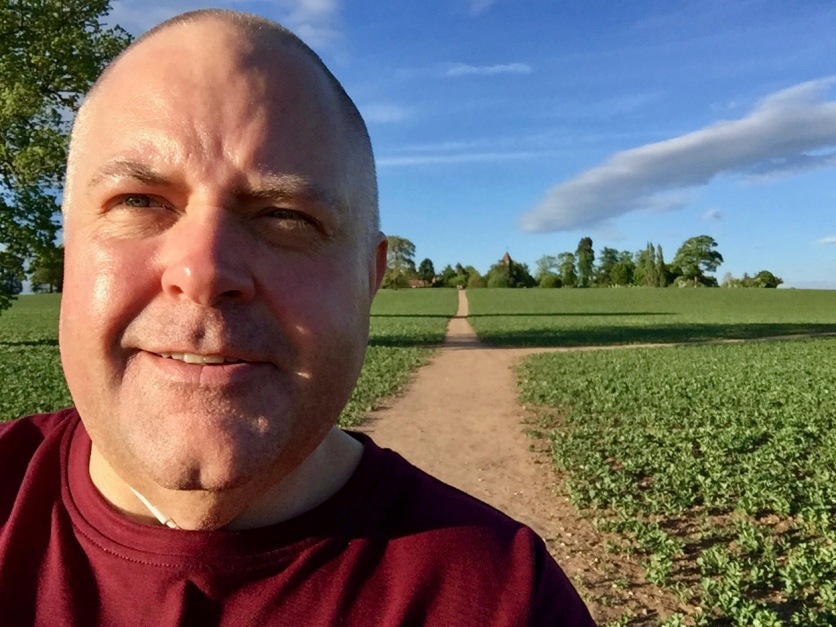 I couldn’t make up my mind whether or not to stop for a drink at the Saxon Mill when I arrived there – but all of the outdoor space was completely full of people and I really didn’t fancy sitting indoors on such a lovely evening.

Outside was fresh, cool and perfectly complimented by the river and the sound of the waterwheel – so I just stopped for a few minutes and took in the view. This really is one of the nicest places to put a pub that I can possibly imagine. 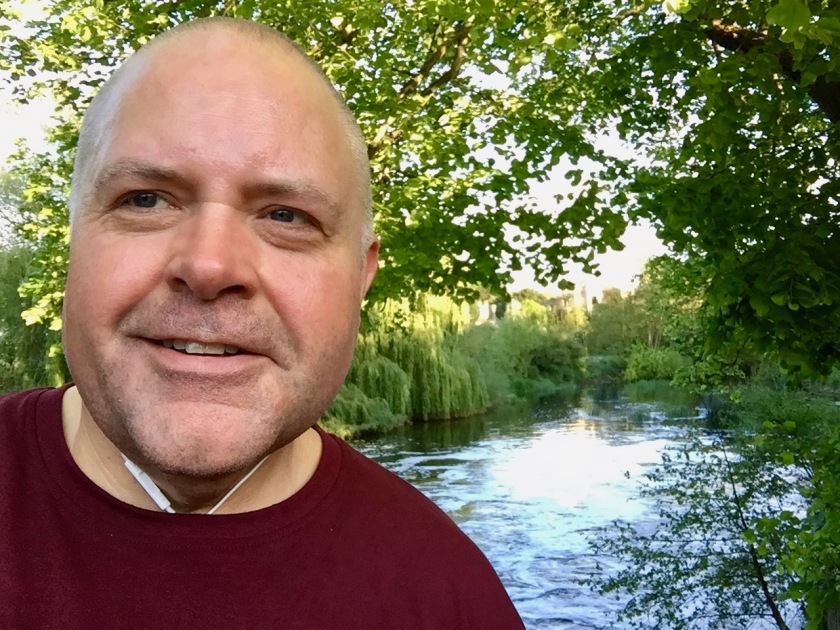 So – now I’m back home and thinking about what to watch this evening. I may look for a film on Amazon Prime. My trial subscription runs out tomorrow so I might as well squeeze the pips out of it.