It’s early evening on Thursday and I’ve done something I swore I’d never do.

I’ve ignored the embarrassment, I’ve paid little attention to the discomfort and I’ve been doing it in public.

It all started on Wednesday – when during a day of rest I decided that I’d do some dancercise (my word for jiggling around the kitchen while I cook) to make sure my Apple Watch’s exercise ring got maxed out. I’ve managed to get my heart rate up into the mid 120’s doing this and it genuinely tires me out as much as an exercise bike hill climb!

Obsession with my watch stats is what makes the difference (for me anyway) between a day where I would otherwise fly under the radar and do nothing or end up doing all of the somethings.

There’s simply no hiding from the spy on my wrist. I either do what it expects or I don’t. There’s zero compromise. If I ignore it then my little green ring doesn’t get filled and that will frankly drive me insane.

So – there I was, filling my ring whilst watching my chilli con carne cook – and I realised that for around five minutes I’d effectively been jogging on the spot.

Then it suddenly hit me. If I could jog on the spot then maybe I could jog in a forward direction as well…

So (unwilling to go outside) I began to jog the small distance between my back door and front door, up and down my hall – continually turning around at each end and speeding up a little each time to see how it felt. Although this wasn’t really jogging in the strictest sense (it seemed more like energetic waddling) it also wasn’t walking and that’s progress.

Doing this barefoot wasn’t ideal though. Until today I didn’t own a pair of proper (and by this I mean suitable for real exercise) pair of trainers under 10 years old where the soles weren’t hanging off. So this morning I headed into town and bought some cheap (but also rather swanky looking) running shoes. 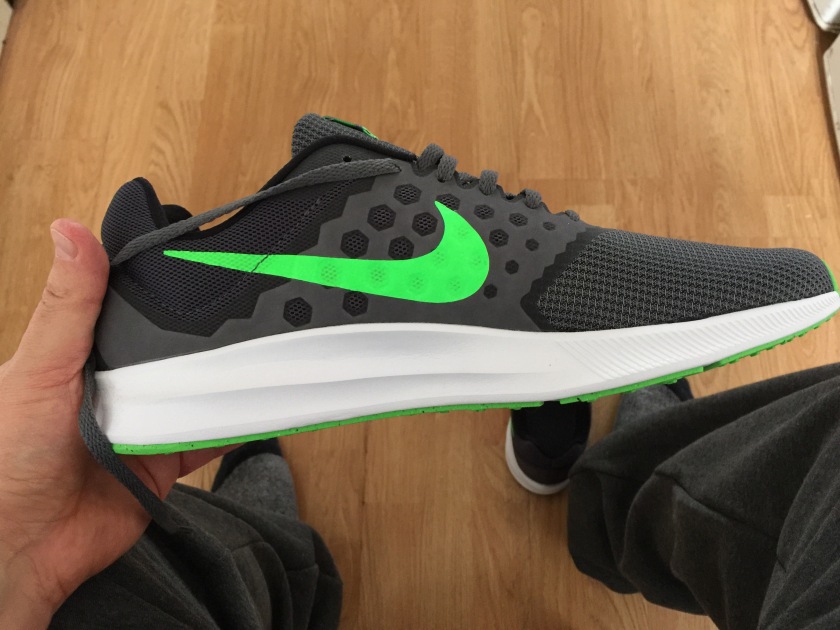 While I was in Sports Direct (otherwise known as the pits of Mordor judging by the employees’ faces) I had a ‘smack around the cheeks with a wet haddock’ moment.

Almost EVERY line of clothing they sell is available in both a 3 AND 4XL!!!

So – for another 45 mins or so I fumbled through their sale items finding one thing after another that not only fitted – but fitted REALLY WELL!

I ended up getting some dirt cheap Slazenger jogging bottoms (also in the photo) to match my trainers and headed off home.

(Via a coffee shop. Just because. I can’t help myself. I’m an addict.)

I have to be honest though. This sudden impetus didn’t come solely from within. My friend had mentioned to me the other day that she was planning to start running herself and was going to give the ‘couch to 5k’ podcast a try to see how effective it was.

She quite often prompts me to think about things that I would probably otherwise ignore (and I love her get up and go attitude) so I thought I’d try to do it at roughly the same time as her. She’s a LOT fitter than me, but who cares – it would be fun to see if I could manage to keep up!

I headed over to the NHS website (link) to see what all the fuss was about, followed the prompts and downloaded the app for my phone.

This app is quite cool – with a few different celebrity voices – and as I headed out to try it I chose my usual exercise music playlist along with Jo Whiley to talk me through the process.

It starts with a 5 minute warmup and then has 7 one minute jogs (at your own pace – not too fast) punctuated in between with 90 second bursts of fast walking to keep the heart rate up. I started on the streets around my house but was near a local industrial estate shortly after the first jog started – and since there was no security, people, or cameras after the first jog was complete I just started doing laps of their private car park.

From an ‘out of breath’ perspective I found this totally do-able. It seems that I’m fit enough to not be gasping for air after jogging – which is very encouraging.

However from a back, boy boob, wobbly flappy belly and knee perspective I definitely felt the 21 stone I still currently carry everywhere. Crucially though I was still doing it. I was jogging in laps around this beautifully desolate little car park in almost total seclusion.

However – rather annoyingly the app crashed on the last run and instead of a final 60 seconds followed by a blissful cool down I ended up doing two and a half knackering minutes of jogging before I realised it had killed my phone. Somehow the screen zoom had been quadrupled (making entering my password impossible) and there was no other way to get around it but a complete hard reset.

According to the app reviews I’m not alone in experiencing this – so one can only hope it’s uncommon rather than something that occurs each and every time. However – this is a major turning point. I haven’t jogged or run anywhere for around thirty years.

I’m just going to leave that hanging in the air while you soak up its significance.

Tonight, while clad completely in mainstream clothes from a high street retailer I went jogging for the first time in three decades.

I started my current journey back in January 2016 completely unable to walk to the end of my road – and have now managed to take my first tentative steps towards running.

I jogged for a combined total of eight and a half minutes.

Truthfully I’m feeling elated but cautious. I’m putting a LOT of pressure on knees that have already had a very hard life – but I’m hoping that I can keep this up and with all the correct warm ups from the app do it without injury.