Despite many weather forecasts suggesting today would see epic rainfall it’s instead proven to be absolutely gorgeous – and has been the perfect morning to be out and about in the countryside.

I’m continually stunned at the wealth of opportunities for exploration that have been (metaphorically speaking) under my nose for years without me once feeling inclined to go and have a look – but rest assured when I say that they won’t go undiscovered for much longer!

Today (as usual) I was up good and early to make the most of the weather – and the company of a good friend – who (also as usual) brought the sunshine with him.

Today it was the turn of the Kenilworth Greenway to be investigated by us – and I have to say we both loved it and agreed that this is probably one of the nicest walks we’ve both been on so far.

If you’re a local history buff the route dates back around 130 years (link) or so:

‘The railway branch line from Berkswell to Kenilworth Junction was opened in 1884. It effectively provided a short cut avoiding Coventry for freight trains heading south. Rumour has it that it was used in the war for the transport of munitions and the siding at Berkswell, left when the track was lifted in the 1960s, was used for ‘parking’ the Royal Train when the Queen visited the area. Later, even the siding was removed to make way for a station car park.

Left to itself, the old railway became a wildlife corridor. Hawthorn, birch and other plants quickly took hold and softened the edges, animals and birds found cover for dens and nests. People also found a traffic free route to and from Crackley Wood where, if you were quiet, you might see a fox.’

My friend and I (looking for the start of the Greenway) found ourselves instead in Crackley Woods to begin with – which was a rather lucky accident as it’s a delightful (and well maintained) piece of woodland with some easily accessible paths and even surfaces.

It’s a limited mobility walker’s paradise, and there were lots of slow moving elderly dog owners happily mooching around the huge swathes of bluebells when we arrived. 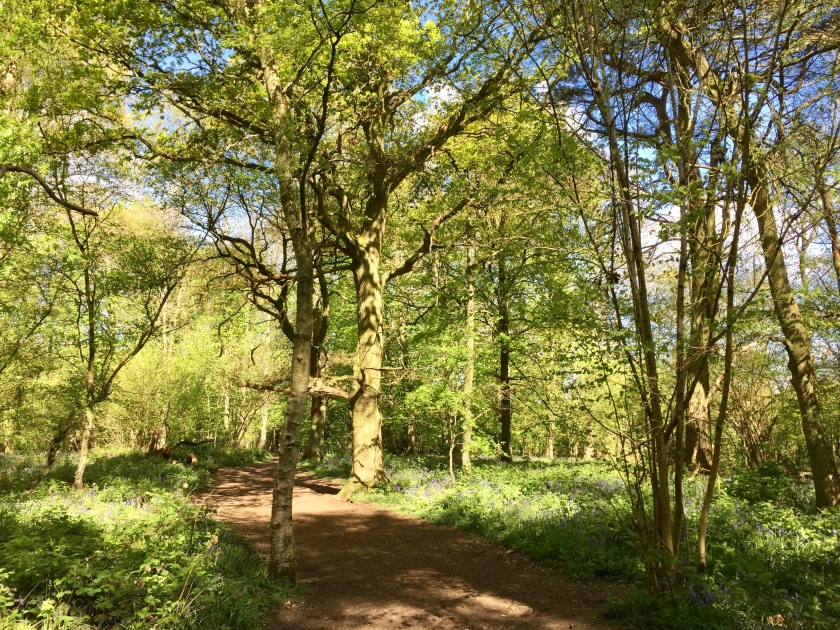 The short circular wood walk was lovely – however we had barely explored half of it before we broke off onto the Greenway towards Balsall Common (at the top of diagram on the sign).

Further along (in Berkswell) there was another helpful map to show the scale of the route (We went from the bottom right to the top left today). 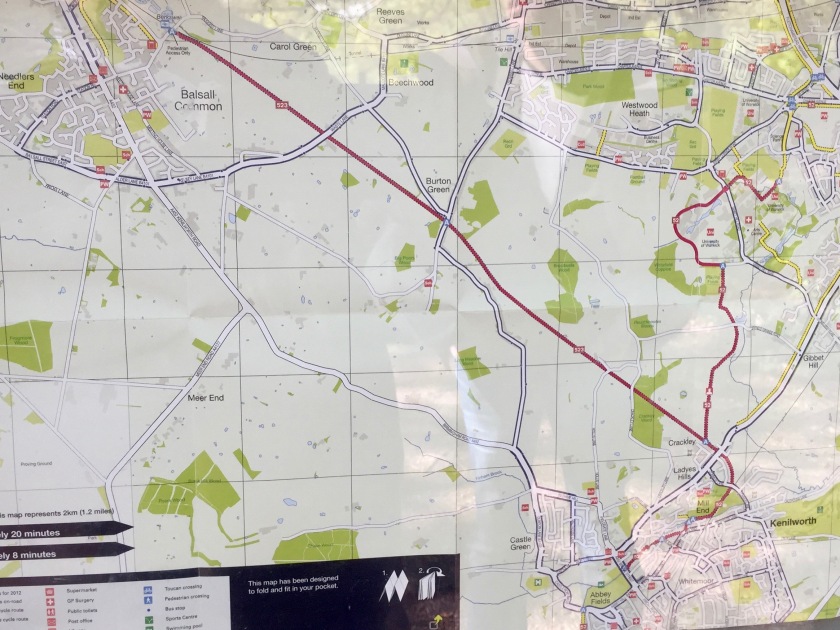 It’s roughly a 9 mile walk to Balsall Common town centre and back. For those who need to stop occasionally on the way there are lots of benches and places to sit and have a drink or a bite to eat.

This route (quite unlike the Stratford or Offchurch Greenways) is almost like a little micro climate for birds in places – with loads of robins and even baby sparrows everywhere we looked.

The route’s entire distance is rather like a covered arboretum with a shady canopy of bridges, trees and bushes for it’s whole length – only occasionally breaking off into other paths or trails, and here and there with a break in the foliage for a nice view.

By the time we reached Balsall Common about an hour and a half later (which I thought was way further away than it actually was) both of us were in the mood for a drink.

Thankfully there was a nearby nectar of life shop where I was able to address the dangerous over abundance of blood in my caffeine stream. 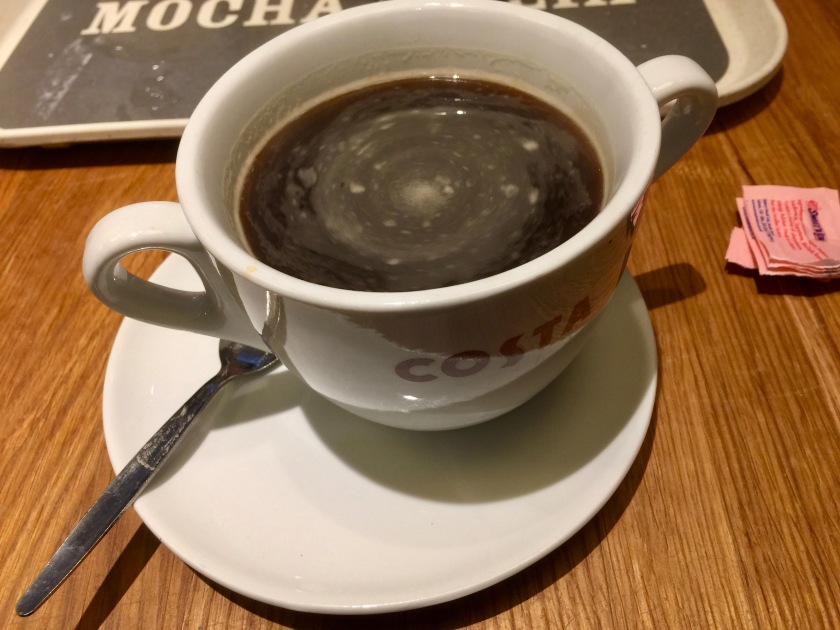 We sat here and chatted for half an hour or so, resting our feet and both absorbing the warm draughts of robusta and arabica goodness.

Although I’ve driven through Balsall Common a lot, neither myself or my companion had ever really stopped to look around. There are some great little pubs right at the end of the walk that are just stuffed full of character.

We both agreed that next time it would be a good idea to factor in a lunch at one of these (as long as the menu fits in with SW of course!) If nothing else I have to go for a coffee in a pub as wonky as the Brickmaker’s Arms. There isn’t a single straight line (or ironically a straight brick) in the whole place – and I can only imagine what it looks like inside… 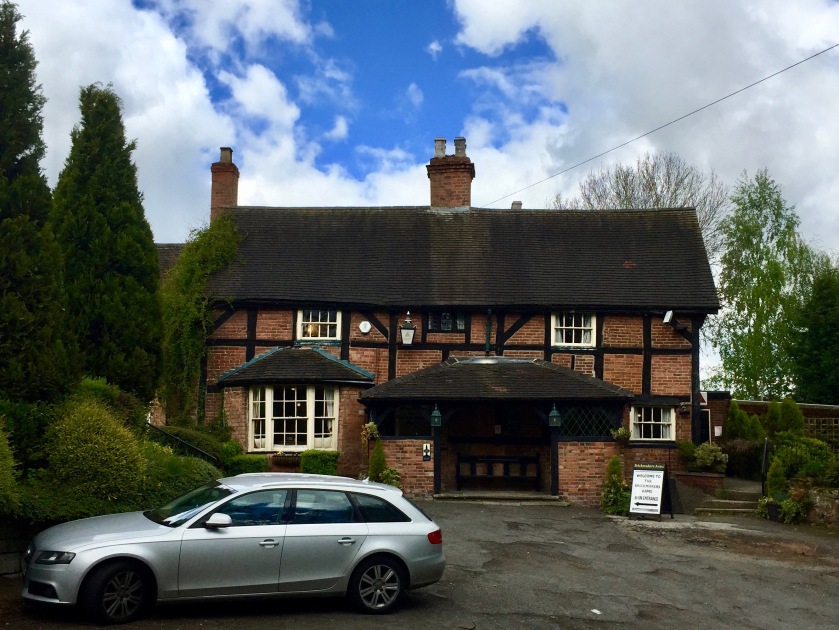 After coffee we headed back along the wooded greenway in the warmth of the sun to the car – this time heading downhill.

It’s at this point worth noting (in case any readers wish to explore this route themselves) that there’s a very mild gradient all the way on the first leg up to Balsall Common. It’s so slight that most won’t even notice it however. Visually you can see it – but otherwise it’s very very gradual – as this old railway marker confirms.

If you aren’t instantly familiar with what this means, here’s a description (link):

‘Gradients are expressed as a ratio, e.g. “1 in 200” means that the track rises (or drops) one unit for every 200 units travelled horizontally. A gradient post’s arms are inclined up or down to indicate the direction of the slope and each one has the value of the relevant gradient marked on it.‘

On the way back the downhill slope was also barely noticeable – but it’s worth bearing in mind if you plan to explore. The slight incline (from my perspective) proved to be good exercise (my watch showed 60 minutes of cardio completed on the way up) and both the environment and scenery have left me feeling pleasantly tired and supremely relaxed.

As I type the weather outside my living room window looks awful. Although it’s now raining it was (according to my friend’s wife) hailing in Warwick while we were wandering around Balsall Common (15 or so miles away) in the sunshine – which is proof that it makes way more sense to just get out there and hope for the best than try to plan ahead or sit indoors thinking that it may rain.

You never know for sure internet. Just get out there and explore!!!