I’m currently revelling in two different kinds of little miracles – the first as old as time and the latter a far more recent thing.

It’s fair to say that some (but not all) of my darker moments in the past week can be traced back to the doorstep of an increasing lack of it – or at least the absence of the good quality and unbroken variety.

Since I repaired my bed and had a good result on the scales however things have improved – and my addled and depressed mind finally shut down and forced my eyes closed at 6pm yesterday. It (and they) didn’t open for business again until 1.30am. After three hours of pottering around the house I nodded off once more and awoke at 8am with around 10 and a half hours of refined weapons grade premium quality highly concentrated sleep under my belt.

I did have a weird dream about standing in a pub full of porridge (up to my waist) and feeding cabbages to the alligators that lived in the gloopy oats however – but I’m not going to even try and unpick that subconscious pile of spaghetti like metaphors. Instead I’ll move right along to number two.

The second miracle is wireless internet.

I’m currently 8.5 miles into my walk for the day and I have approximately four miles to go until I reach home. As I type my blog online I’m eating my lunch in the countryside whilst listening to the birds sing.

How cool is that?!

Although I originally started out with the intention to just do some shopping and go home the day turned out to be so nice that I changed my mind when I reached Aldi and decided to instead buy some bits and bobs for a picnic – and spend the day out and about.

It’s been a superb choice – and the food I chose was not only totally on plan but cost me only £4.31 – which is a great price to pay for a day out with meals included!

Whilst walking along (munching carrots and apples for my breakfast) I’ve retraced the route I took last week (here) along the Grand Union canal through Radford and Offchurch (and it’s Greenway) before returning via Newbold Comyn and Leamington. This time however instead of parking near the canal and doing a circular five miles I’m doing a ‘full fat’ route from my front doorstep and back.

The canal and countryside has been absolutely FULL of life – and today I saw my first little ducklings of the season all paddling furiously with their extended family to wherever they were heading. These little guys are so cute and they make the most adorable little chirpy quacking noises! 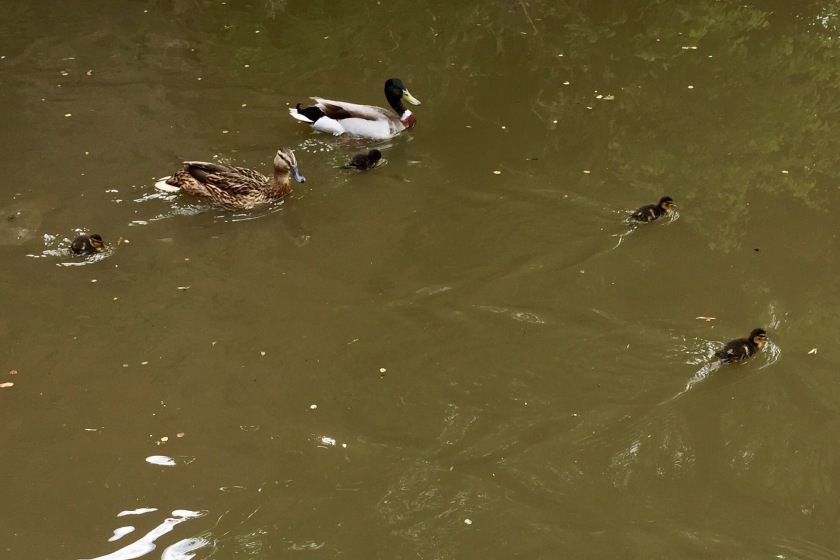 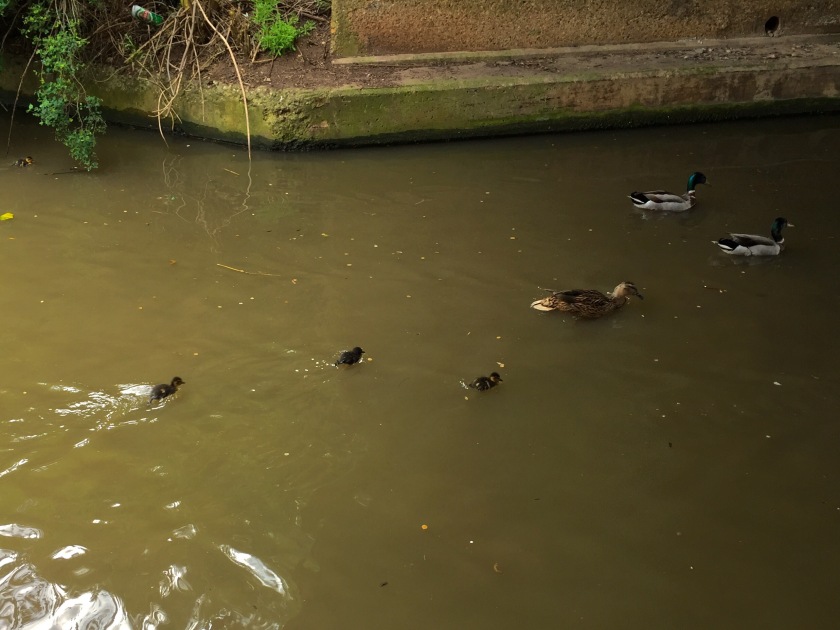 Just a little further along there was also evidence that the swan nesting by the bank that I’d previously met (here) was close to having swanlings of its own. Initially it was quite tricky to pass the nest due to the extremely territorial and sentinel like partner on the bank who tolerated my photography but wasn’t keen on me walking any closer to the nest than the very edge of the canal towpath.

I kept talking gently to them both however and I think they got the message that I was only passing by and didn’t mean any harm. They also let me take a short video before I moved away!

Even though it’s not been all that long since I passed by here before the thing I love about nature is that all you need is some slightly different lighting to change everything up a bit and make the walk interesting all over again as each time it takes on a subtly different hue.

Consequently there’s always something new to look at – and where there are nice views there there are also opportunities for gratuitous selfie shots!!! 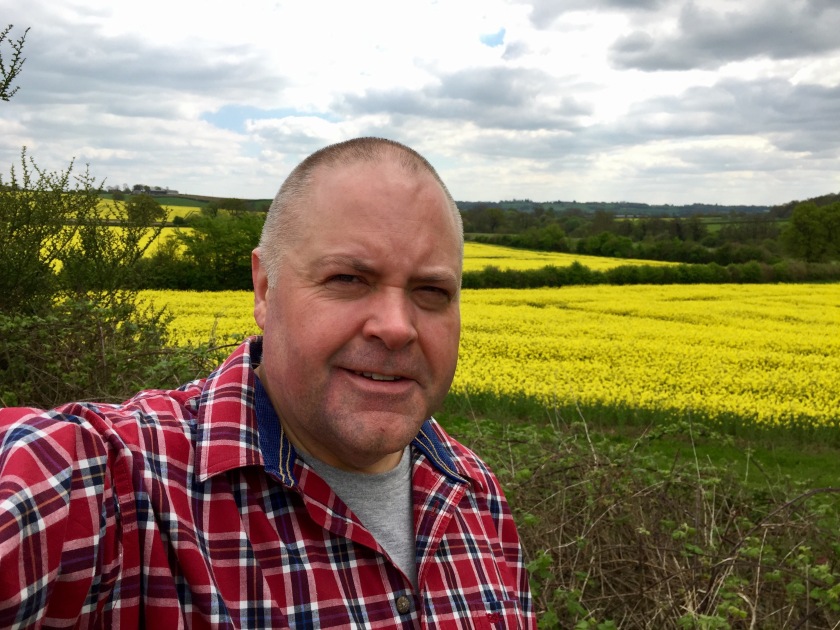 The character of Offchurch is absolutely lovely – and it’s so quiet and peaceful that I’m amazed you don’t see cars crashed into lamp posts all over the place with snoring drivers at the wheel.

I can understand why people will pay a lot to live here. It’s about as close to an idyllic little English country village with thatched roofs and red brick cottages as it’s possible to get – and I’m sure that somewhere in the world (if there’s any justice) there’s a chocolate or biscuit tin in circulation with a picture just like this on it.

The last time I was here I stopped at the pub for a drink and a rest – but this time I moved right along. I had all I needed in my picnic bag and was feeling both frugal and spritely. As I was walking I was also occasionally drinking my flask of coffee and munching a carrot and chicken ‘brunch’ at the same time.

I can understand why they’re so relaxed. As long as no-one says ‘Quarter Pounder with cheese’ for a while they’re likely to stay in their idyllic setting without a care in the world.

It seemed to me that it wasn’t a bad life being this particular cow. There was birdsong all around her, food right under her nose – and plenty of bluebells in a nearby coppice to idly study (if indeed there is such a thing as bovine botanical curiosity). All she had to do in return was chew grass and tolerate an occasional chubby weirdo with a smartphone.

Otherwise she didn’t have a care in the world.

I left the cows and continued through the fields and over the river to where my blog started as I sat to eat lunch. Nearby here was a sign I’d missed the last time around that shows a bit more about the conservation of the area – and suggests that I have much more to explore than I have already. 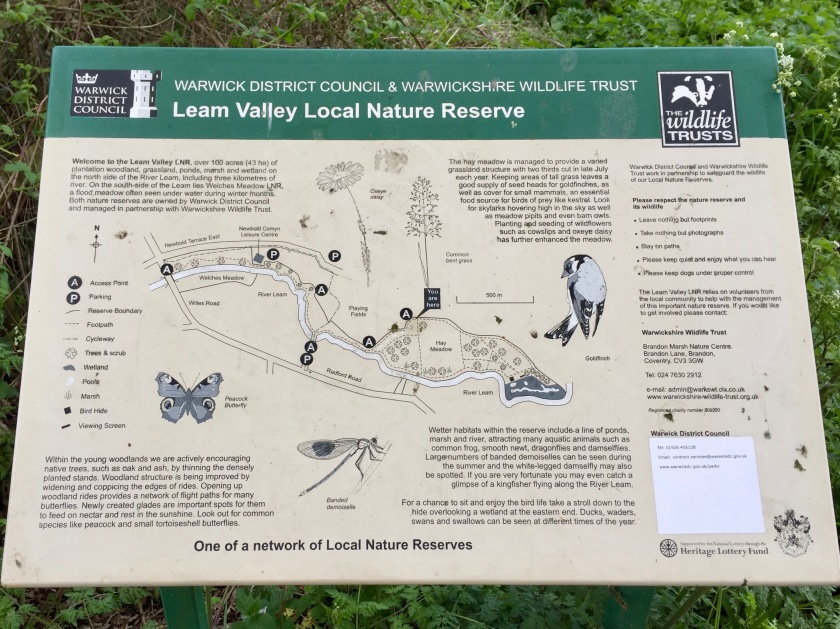 I haven’t seen any Kingfshers so far but it’s an incentive to come back again and again if they live around here. I don’t think I’ve ever seen one in the wild before and I’d really like to! Watch this space!

Shortly after I stopped in Leamington for coffee and then moved on towards home.

As I type the final words to my post, in the background I have a hearty beef and swede stew bubbling away on the stove. I like to let it slowly simmer for at least an hour and a half before I mash it up a bit, add some mixed beans and tuck in.

At the moment my living room is full of gentle afternoon light and birdsong from the trees outside. There’s a pleasant aroma of garlic and bay leaves permeating the house and as I sit with my legs upon a tall leather pouffe I can feel the balls of my feet throbbing a little from all of the walking today.

I’m struck as I finish typing this – that at the moment – I love my house and the things in it, despite their associations to ‘old me’. I no longer want to smash it all as I did in my post the other day (link).

It’s folly to be angry with inanimate objects when they are merely reflecting your own negative feelings about yourself.

When I disappear down my own particular rabbit hole I still unfortunately find a lot of regret in there and I’m often annoyed that it took me so long to find what I have today. The silver lining here though is that regardless of how long it took to get to the (physical and mental) place that I currently inhabit – I eventually did, and for that I’ll be eternally grateful.

Although my aching feet may have a different opinion – but they’ve done me proud. As I write the final line of my post today they’ve walked 25,353 steps and 12.58 (blissfully enjoyable) miles. In the process they’ve have helped me burn 1763/4275 active/total calories and made my picnic and impending dinner guilt free.

Their sacrifice will be not be forgotten as I sit this evening watching Doctor Who with a large bowl of what will no doubt be a delicious soup – which I think is now ready to eat. 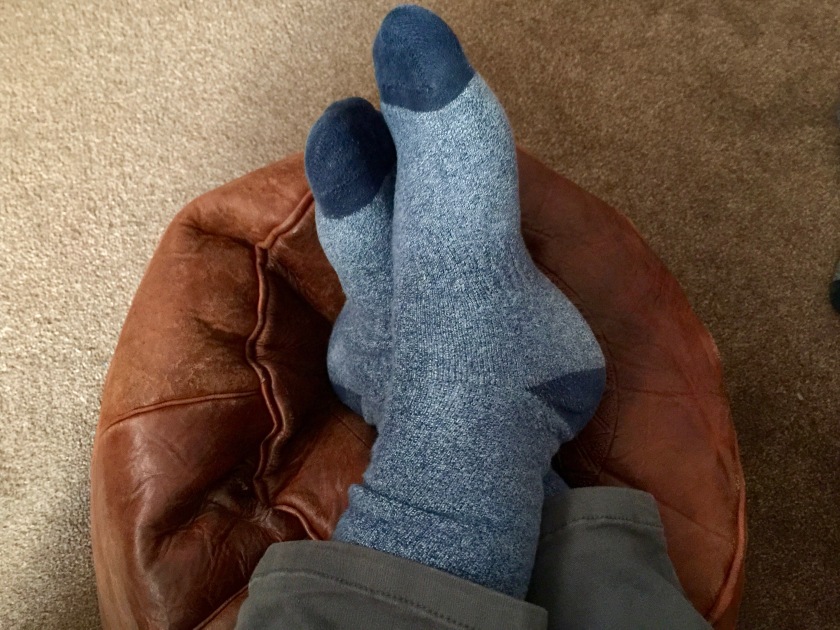