I felt like a broken man when I woke up yesterday.

I knew that my enthusiastic tramping around the Malvern hills on Sunday may have repercussions but I was expecting it to be in my knees – and not… well… EVERYWHERE.

OK – I’m probably overstating it a little – my upper body escaped largely unmolested – but every time I tried to sit, walk down stairs or gradients my legs started screaming.

Oddly my knees were absolutely fine. Not a single twinge. I’m actually really glad about this because I always thought I’d done long term damage to them while I was massive. My main issue was instead the front of my thighs which were complaining like they never had before.

Around this point (whilst gingerly hoisting myself on and off the loo) I received a text from a friend wondering if I fancied a walk around St Nics park.

We’ve not had a chance to catch up for a couple of months now thanks to various circumstances, so I immediately replied back that I’d love to. It would also be a good opportunity to try and stroll away my aches and pains.

Sitting down all day would do them no good at all – despite that seeming a very attractive alternative.

By the time I met her I’d already walked a mile and a half (cursing each downward hill like a drunken sailor with Tourette’s) and was a little warmed up.

Thankfully though our walks have never been about speed. They’re always just a really nice chance to chat and catch up on family events or Slimming World progress.

They’re also usually a smashing opportunity to see what’s happening with the swanling and the other people we both meet regularly in the park. 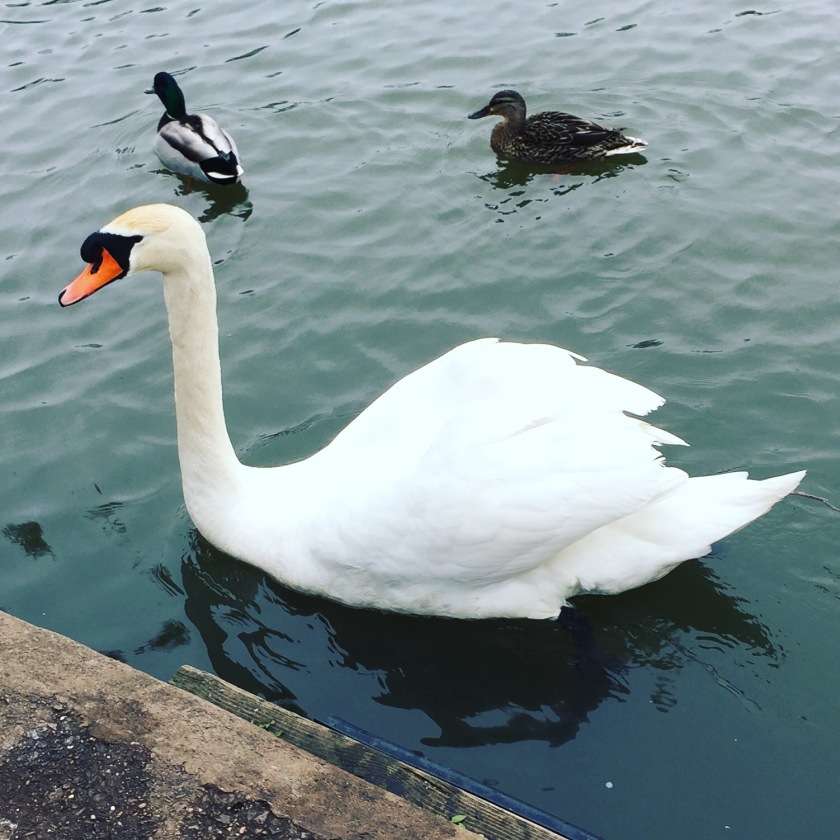 As it happens the swanling (which I saw from a distance last Thursday but couldn’t get a good photo of) is now all grown up.

This makes me both happy AND sad. As a friend said on Facebook when I posted this picture yesterday we’ve both grown and changed a lot over the last year – and our progress seems to be inextricably interlinked in my mind.

To see it proudly and capably making its way in the world is a wonderful thing. I’d be lying however if I said I didn’t miss the little ball of fluff that last summer was busy surviving the gradual demise of its little siblings.

Still – the world is always changing and we have to adapt and change with it if we want to survive. This little fellow is no exception.

Neither was the curly haired toddler I usually see wrapped up warm in his buggy with his always chatty mother. She is never less than delightfully complimentary about my weight loss when I see her – so ranks highly on my list of people I like to bump into. I always walk away from our chats with a smile and a little spring in my step.

Her little one is now out of his pushchair and walking slowly around the park with his mum. This little fellow’s grin (much like the enthusiasm of his mother) is completely infectious – and his impossibly clear and sparkly brown eyes never fail to remind me how wonderful it must be to be a little almost brand new person with the world waiting you to grow up and explore it.

After a couple of laps my friend and I hugged and headed off in our respective directions to continue our days.

By this time I felt that if I stopped I probably wouldn’t start again. My legs still felt awful.

This could be bad news as I had another walk with a friend planned for the early evening – and we never fail to have an excellent natter. It was something I didn’t want to miss.

So I kept walking.

When I’d finished I went home and kept myself moving about with housework and cooking (it’s a soup themed week at SW and I was making an appropriately speedy beef and swede stew) before heading out once more when my friend arrived.

She (like me) is always checking her watch for her step count – and last week I was marginally beaten in our increasingly regular (good natured) battle to be the king or queen of putting one foot repeatedly in front of the other.

By the time I’d finished yesterday though I think I’d taken pole position (at least this time – she’s quite feisty and I expect spirited competition next week 😄).

I also smashed my record for distance walked in a day – and managed over sixteen miles!

When I awoke today (and multiple times in the night) I was hoping that the aches and pains would be subsiding – however I probably should have taken into account the fact that I clearly don’t know when enough is enough any more. When I should have been resting I instead went out walking like I was on a mission.

Only a fool would do the same again.

So today I did the same again.

As I type I’m sitting in Solihull after a completely unplanned (but immensely enjoyable) early morning walk down the canal and around town to Warwick Parkway three miles away (the out of town train station as opposed to the closer one around the corner).

I have a coffee in front of me and I’ve been reading a book. In case anyone wondered whether I’m still reading self help manuals – I am – and at the moment I’m making my way through this:

For someone that claims to be an optimist he has a pretty gloomy assessment of the world at the start of the book. Essentially his opinion is that everything is out to get us and every social and political structure is designed to control or enslave us.

This may or may not be true. In some respects I often think it is – however I’ve come to the conclusion that living your life motivated by the claustrophobic awareness that invisible forces are trying to crush you is no way to exist.

Whether it’s a reality or a fiction I have pretty much zero control over it and I only form such opinions because I’m continually drip fed them by a 24 hour media cycle which at times I feel I can’t escape.

If I choose not to watch and worry am I stupid or am I just happier?

It’s clearly a personal choice though and others may find not knowing or acknowledging what’s going on in the world equally as stressful or upsetting.

Furthermore they may believe that my lack of political engagement exemplifies everything that’s wrong with modern society. They may be right – but I don’t care. It’s all too depressing and I no longer want to engage with it.

Either way so far the author and I seem to fundamentally differ in our world views and unless he cheers the **** up in the next few chapters I’m moving on to greener pastures.

So – in the meantime I’m going to indulge myself with some window shopping, and looking at things I probably shouldn’t covet any more (but still do a little bit).

I can’t help liking shiny things Internet but I’m trying not to!