Despite my post on Sunday (titled ‘determined‘) striking a defiant ‘can do’ tone and me completing an epic day of activity (at least by my standards) if I’d written a post on Monday it would probably have been titled ‘hungry‘.

From the moment I woke up until the moment I hit the sack in the evening all I could think about was eating – and if I’m honest I acted upon these impulses – although still made ‘good’ choices.

Regardless of me eating the right things (and by this I mean there is still no processed or junk food in my life) I was still aware that I’d eaten too much.

Maybe it was a consequence of this mild lapse that Tuesday was also a struggle, but for other reasons. My malaise yesterday was less related to food, and more to energy levels.

I found myself hitting the sack last night at an appallingly early 8pm. I was fast asleep by quarter past, and apart from a sudden wide awake moment at 1am this morning (thinking about work related things I’d been learning the day before) it was a slooow day exercise wise – much like the one that preceded it.

Today therefore I’ve been filled with diet related guilt and trying to confront the elephant in the room.

Activity on a work day.

Thankfully it’s been a good time to wade in on this subject. Although overcast it’s been strangely bright today. There were showers on my drive in this morning but the remainder of the day has been dry and relatively warm.

Every day for the last three weeks I’ve been jumping on my exercise bike at 6am – and rather like I hoped its become ‘the new normal‘. In fact I’d go so far as to say that at the moment I no longer consider it as counting toward my daily activity. Occasionally I’ve resented the early start and not enjoyed it – but I’ve got up every day, started pedalling – and crucially completed every single hill climb without stopping early.

It’s now just something I do every day.

I still miss the walking though – and decided this lunch time that with the good weather I had no excuse not to go and explore a bit locally.

I’ve been warned by my new colleagues to be careful with walking along the country lanes nearby – so I’ve been a little on my guard. Apparently not so long ago someone from my workplace was killed when they were hit by a car at lunchtime walking down these where the paths disappear into hedgerows and there are lots of blind corners.

My headphones remained in my pocket today. It was just me and the ambient noise.

This wasn’t a bad choice – and although I only managed two and a half miles or so in my lunch hour it was quite pleasant. There are lots of fields and open land locally and once you step away from the main road the traffic noise largely disappears.

There’s something really wonderful about getting out and about in the middle of the working day. It re-connects you with the world, and takes you out of whatever mindset you had before the walk. If you’re really lucky nature is also ready and waiting with open arms to say hello as well. 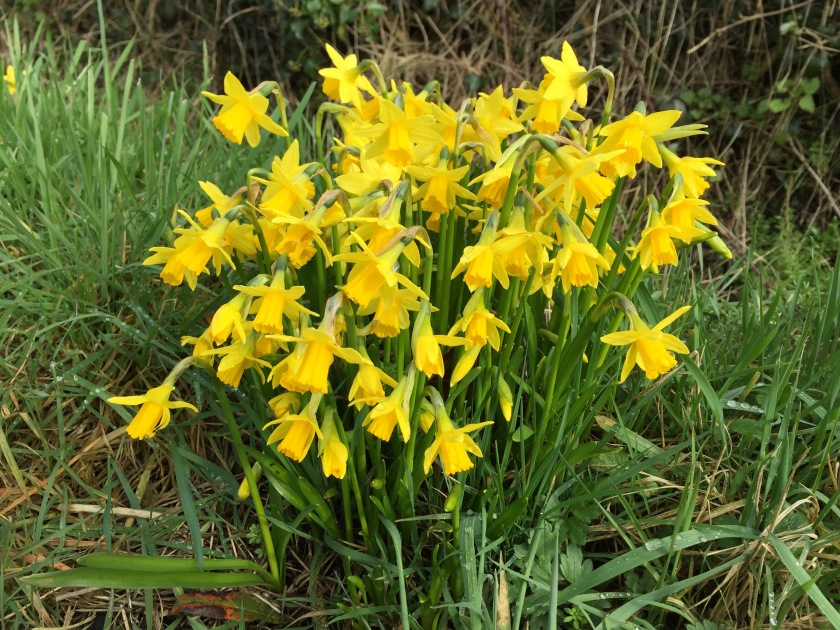 Just around the corner is a really nice little church which looks like it might have some nice stained glass windows inside. Although I didn’t have time for a look around I’m going to have to go back and have a look at it from the inside.

I particularly like the bell tower – as I’ve not seen one quite so open to the elements for a while. It’s quite an interesting architectural feature I think – although it seems to be lacking anything vaguely resembling a bell!

I was planning to go for a walk when I got home in the evening as well – but when it came down to it I honestly didn’t feel like spending the length of time it would take to burn the calories that I wanted to, so I elected instead to have my third workout of the day on my exercise bike – making the total for the day 4.35 miles walked and 13.5 (virtual) miles cycled.

This leaves me at 93 minutes of cardio and around 1600 active calories burned – but I fear I will have to do much more for the rest of the week if I’m to have a good loss on Saturday.

I wonder sometimes if anyone does?

It would be nice for once to put my head on the pillow and think (without any voices in the background) that I’d done all I possibly could on any given day – rather than feeling that I hadn’t accomplished what I should have done.

Don’t get me wrong – I don’t sit around feeling down about this – but this sensation almost never leaves me and the thought process is there in the back of my mind no-matter what I’m doing.

Sometimes it really wears me out.

It’s like I’m competing with an ideal of myself that some hidden part of me set without ever letting me know what the parameters were. All I know for certain is that whatever the goal is I never meet it – and regardless of what I accomplish I can’t sit back and relax physically or mentally.

However – on the flip side of that coin I’m now also someone who is driven, and needs to be.

If nothing else this eternally vague sense of personal dissatisfaction propels me off the pillow without pressing snooze at 5.50am and makes me willing to improve every week – and in that respect it’s supremely useful.

Three cheers internet for negative obsessive compulsive behaviour thats been re-purposed to benefit the fatty afflicted by it!