‘The fools.’ I thought as I looked at the salad bar. ‘Don’t they know who they’re dealing with?’

Moments before an innocent young waitress had handed me a large plate and confirmed what I had hoped was true. ‘Yes‘ she said. ‘the salad bar is unlimited – you can go back as much as you like.‘

It’s my birthday today – and in my ‘new normal’ the brakes are off. I’m treating myself. Nothing is going to get in my way. However – very little can when you feel as good as I do at the moment.

For instance – nothing stopped me this morning from getting up early and celebrating for 35 minutes on my exercise bike. Very little was capable of preventing me from enjoying myself further by going to weigh in with my friends either. Wild horses couldn’t have pulled me away me from giving them hugs (as well as getting them back) and several tug boats couldn’t have dragged me away from petting the cute doggies people brought to group for me to play with on my birthday.

Yep – there’s no limit to my celebrating.

This is the extent of my excess in the new normal.

Where once there was a stinking hangover, kebab wrappers and a sense of vague regret there’s now me treating myself with things that are good for me. Great people, exercise, and healthy food.

Also – who needs to go off the rails when I have the support of the guys in my Slimming World group to feed off? They’re worth getting out of bed for on their own – even if nothing else happened today!

They were lovely this morning. I arrived to several unexpected cards and a surprise present (a really cute little knitted doggie which is definitely going on my new desk at work!) and lots of really embarrassing singing of ‘Happy Birthday’ by the ladies as I stood in line waiting sign in and get weighed.

By the time I stood on the scales it barely mattered what the result was – as I was in such a good mood.

In the end I lost a pound and a half – and got the group’s slimmer of the month award which was a nice pat on the back. This means that I’m not quite at the 11.5 stone certificate point, but I’m VERY happy to just be moving forwards – and I’ve only another pound and a half to go! 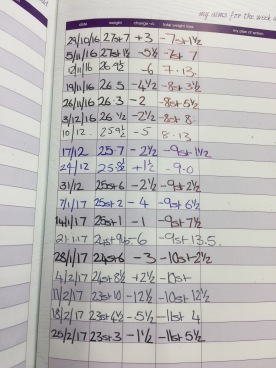 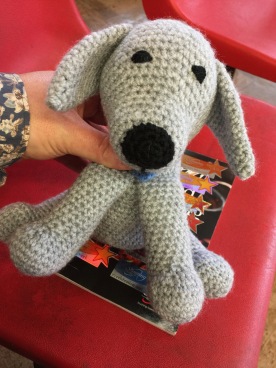 Although I started the month with a gain due a lot of effort in the last three weeks I managed to turn it around and ended up 17lbs lighter than I was at the end of January.

I love my Saturday mornings at Slimming World. There are some things in life I don’t resent paying for at all, and this is one of them. The people are wonderful and I couldn’t wish for a better support network both in person or online.

Of course – many of them wondered what I was doing to celebrate for the rest of the day.

‘Going for a meal.’ I replied.

‘Do I need to be worried?’ Angie (the group leader) asked.

I almost laughed. Definitely not.

If it was fried, covered in batter, full of e-numbers and carbs or loaded with sugar then it had precisely zero chance of getting onto my plate. I knew what I was going to do. I knew that there was a salad bar at the Shelly Farm.

And an hour later – there I stood. Surveying the battlefield from above, and planning my attack. 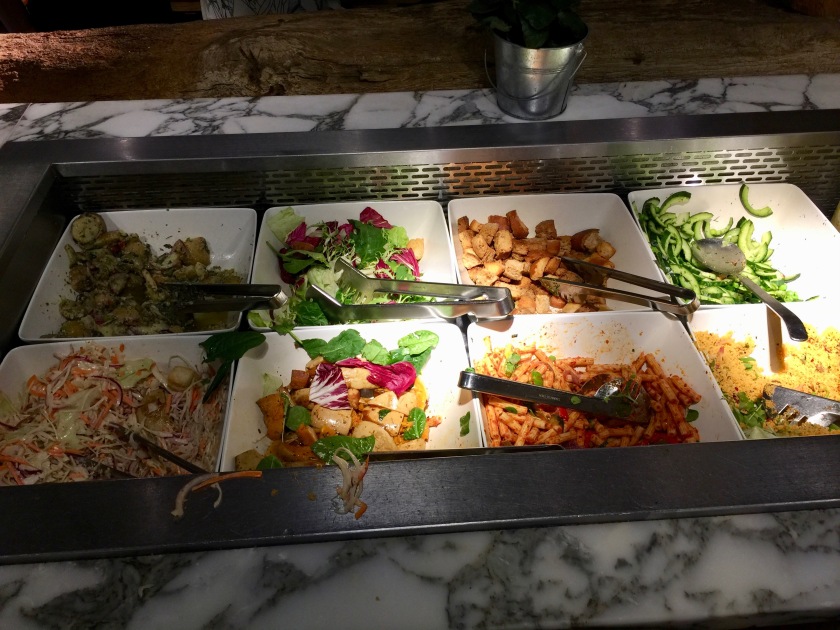 Although there were ‘only’ 9 choices (7 if you discount the potato salad in the upper left which looked like it was swimming in oil and the croutons second from the right) what was left was never going to cause any serious damage. I have no idea what the syns were – but they couldn’t be anywhere near as destructive as a plate of fish and chips or a pizza (there was a huge pizza oven in the background churning out carbs at a frantic rate).

From the top left clockwise (minus the evil ones)

So – the vast majority of it was either speed or free – and the rest? Well – it’s my birthday!

I also had some olives (10 per syn I believe) 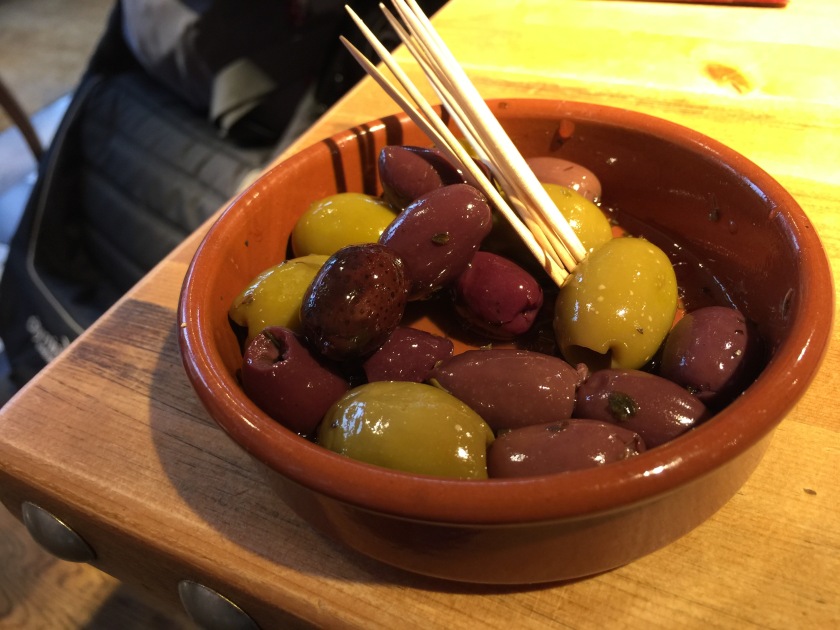 I went back to the salad bar three times (leaving out the coleslaw and pasta on the last two journeys) and was finally being beaten half way through the third plate by a ridiculously filling chunk of butternut squash.

All around me steaks and pizzas fell by the wayside – and were soon followed by ice cream and cookies.

Did I feel disadvantaged?

Hell no! Look at my food! It’s AWESOME!

Why on earth would I want anything else? Not only was my birthday dinner 1/4 of the price of steak and chips (it was £5 for my unlimited platefuls compared to £20 for a hunk of beef and some fries) but it was exceptionally prepared, insanely fresh and light – and thanks to my complete lack of shame very filling indeed.

I finished with a nice coffee – and it’s accompanying biscuit remained unmolested. 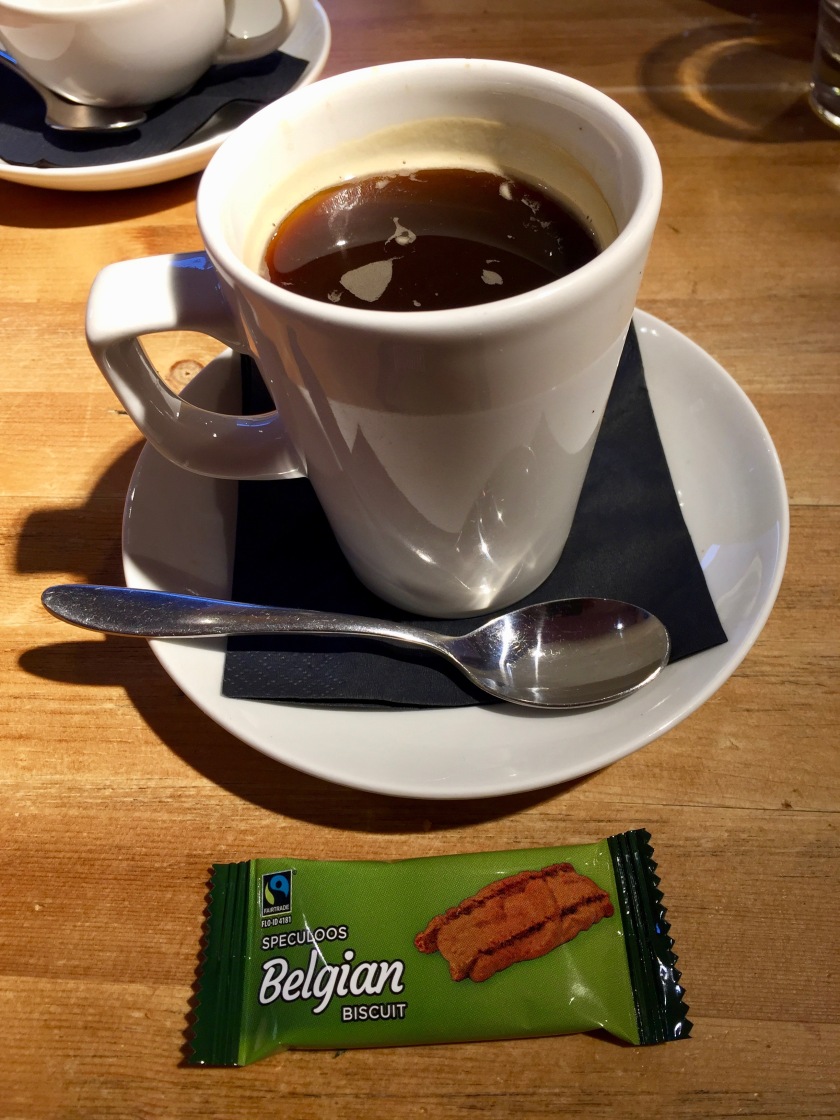 Now I’m back home after another metric ton of goodbye hugs and I have a full evening ahead. I’ve also got an even fuller day planned tomorrow as I try to squeeze the pips out of my final day of freedom. I’m using my weekend to hook up with as many people as possible, and going for multiple walks!

I’ve also got to do some food prep for my new job on Monday (yikes!).

I couldn’t care less about another day. It’s just a number. I also had no sleep last night and my eyes have been killing me all day. My shoulders are aching and I have a pain in my left calf from a persistent cramp.

I should be in a bad mood – however, none of that matters.

The reason I feel so good is people. They’re all around me lately and they’re lifting me up out of myself all the time. I’ve seen nothing but smiling faces all day and this evening.

I feel happy internet because today I feel richer than any man has a right to be in life – and it’s rooted in something that no salary or pile of gold can buy. Long live the new normal.