I think my mood is being affected by my cold as I’ve no other reason to wake up feeling glum. However for some reason I did.

Oddly today everything seemed grey when I opened my eyes and my enthusiasm for anything and everything was at rock bottom.

Although… now that I think about it – maybe there is something on my mind.

I know I started to deal with my clutter the other day – but I’ve not finished. Doing so has unearthed items I’ve avoided for a quite a while – and some ‘scabs’ are still sitting in drawers and cupboards waiting to be picked.

It’s been over a year since my mother’s death and I’m still seeing things around my house that came from her bungalow or that belonged to her and remind me of times and places I don’t really want to remember.

There was so much of it that it seemed impossible to deal with it at the time. However – now I’m feeling like I want a new start for so many aspects of my life it seems appropriate to try and face up to this.

I’ve not buried any of the feelings I experience about her. It’s quite the opposite actually. I’ve lived them in public as I’ve written them down here – and it’s helped.

There are some things that I ‘inherited’ that are tougher to mentally process and physically deal with though.

I’ve given a lot of the generic stuff away rather than sell it. There were things that could help friends and that I had no need for. Practical stuff – like incontinence pads, cleaning supplies, garden tools, and cans of food.

It made me feel good to see her possessions helping people and re-wrote much of the negative narrative in my mind about the items I was left with. The things she obsessively hoarded could now be used as they were intended to be – in a positive way.

But then there are her paintings and masses of scribbled (and repetitively duplicated and muddled) notes about the family. All of these are individually wrapped – as if a squirrel inhabited her mind instead of a human being.

It makes pulling the mental puzzles apart that are contained within exhausting.

However the information they hold is useful and relates to the history of my family. I can’t just throw them away – but I also can’t easily order or make sense of them. Up till now it’s been easier to leave them in a cupboard and come back to them at a later date.

‘Later’ is now a year on though and I still haven’t tackled those or the paintings – of which there are a lot – all painted by her.

Although this may sound callous none of them have any emotional attachment for me. With very few exceptions I dislike every single one of them both in style and for what they represent.

The frames and the oil paint she used is discoloured and yellowed by the same cigarettes that killed her and every one of them has lived in the house of a heavy smoker – in some cases for 40+ years.

They smell – and every time I catch a whiff of the odour it brings back a memory of her, attached to oxygen and struggling to breath – but still smoking.

By the same token though they’re paintings and getting rid of them seems almost akin to burning or defacing books in my mind.

On top of that they’re by my mother. She created them. They’re the legacy of her mind and one of the few things she really loved in life.

They’re also one of the few things (now that I reflect upon it) that seemed to make her happy.

It makes me feel nothing but bad that I want to discard them – and I fear that if I do so then later on I’ll regret my decision.

But I don’t want them in my life.

It’s a conundrum that I don’t have an answer to. Every time I look at them I then immediately look at the loft hatch, which leads to the last totally empty space in my house.

Do I move the problem to yet another location and ‘store’ them there – or is this just avoidance? If I put them in my loft am I deferring the decision or am I sensibly preserving the past?

I do know that the only things that make all this go away (at least temporarily) are exercise and going outside.

Doing so gives me a sense of purpose that blows away the cobwebs of the past and reminds me that even if I feel a little low today that tomorrow is a totally new day.

Walking fast and getting out of breath makes me remember that regardless of what’s in my cupboard at home I’m continually moving forward. Even though I’ve yet to deal with this aspect of the past I’m making progress.

Plus it’s the right time of year to confront the reality of bereavement because the world is suddenly walking up. Nothing truly dies. It’s all just a process of continual rebirth.

As I walked briskly toward my customary coffee shop this morning I noticed that (during the last 48 hours that have passed since I last walked here) spring had arrived.

Hiding in the grass by the path were the first crocus shoots of the year, pushing upwards into the warmth of the Sunday morning sun as it peeked through the cloud cover above. 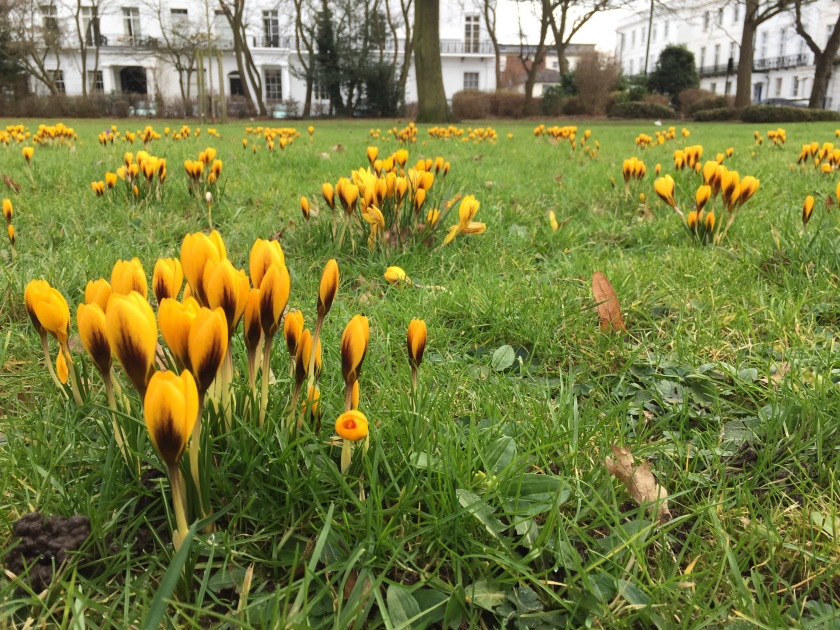 They look lovely and really cheered me up.

So – after my coffee I’m going to go home and start again.

I do know one thing though.

It’s important to come out the other side feeling like more than you were and not like you’ve been somehow diminished. A person may be gone but they left a legacy – and I don’t mean in terms of property.

Each and every life that ultimately leaves us lives on in the changes that they prompted or the thoughts they left in our minds – be they good or bad.

Every day is a conscious choice for me about what to do with the memories of her. Each time I think about my mother I consciously choose to be inspired by her failings in life and not buried by the weight of her problems.

Plus she liked crocuses Internet. She’d be happy to see them right about now.

If she was alive she would probably be contentedly watching her own grow from a seat in her back garden. She’d be wearing her well worn and faded slippers and thoughtfully smoking a fag – all the time sipping from a hot, milky, sugary mug of tea with a picture of the queen’s jubilee on it.