It seems not all that long ago that I struggled to mow my front lawn.

It’s not a particularly large lawn – and it has an extremely modest slope. It’s probably around 12ft square, yet when I used to cut the grass (when I could bear the physical pain and humiliation) I had become so immobile that I had to position a stool just inside my front door so that I could pop in and sit down to catch my breath and wait for my heart to stop pounding.

I usually had to do this three times to complete the front lawn. The back one (being much larger) was way worse.

Right about now (if I was writing this six months ago) I would have written ‘I dislike gardening’ or some other dry witticism intended to explain my lack of pruning. Indeed – I did this in my blog last May (here) – jokingly cursing my (actually very nice) next door neighbour for trimming his lawn, because it meant that I also had to do mine.

I used humour a lot to deflect both myself and others away from the truth when I felt vulnerable – but I’m trying not to these days. I’m just trying to be honest.

I used to give many other excuses or opinions as reasons for not doing things. I’ve realised over time that these blanket statements about disliking or disapproving of an activity were actually just ways of covering pain and embarrassment.

I know now that my much used phrase ‘I hate gardening’ never actually meant that I hated gardening. Instead it translated to ‘I hate the way it makes me feel. It hurts and I feel exposed’ and was instead a defence mechanism.

This method of avoidance however has had consequences for my garden.

My front bush was shameful (insert joke here). It looked completely unkempt (insert further childish humour) and was badly in need of trimming. 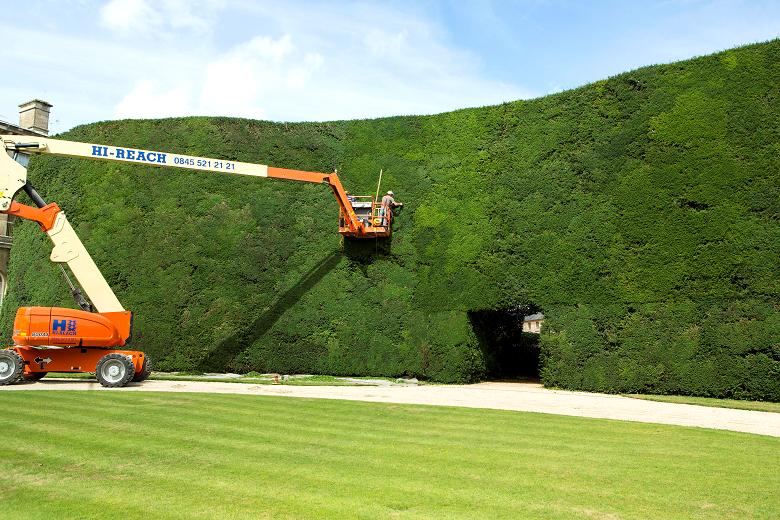 As I returned to my house yesterday the lady from next door approached me and asked what I’d like to do with it – and whether I would agree to us mutually cutting it down. The answer frankly was ‘yes!’ I’d never liked the thing and always wondered who it belonged to (me or next door?) but we’d both let it grow for so long that it had just become a huge obstacle.

Again I realised though that old thought patterns had made this so. I still looked at the garden and thought ‘pain and humiliation’, rather than ‘I can make this look nicer and enjoy it.’ So I immediately agreed with her to make a start on it – and this morning at around 11am stepped outside (wrapped up warm as it was cold!) to start hacking away.

Before long my large green recycling bin was completely packed solid with snipped up branches, so I went next door and grabbed theirs. Soon that too was half full and I was dragging ever longer lengths of brambles and branches across my garden to chop up and stuff into it.

Another neighbour popped out and said hello as he passed – so I asked if he minded me putting some of my cuttings in his bin as well. ‘Not at all – I have two. Help yourself!’ he said before heading off to work.

I carried on filling up the second bin and looked at the time. I’d been standing outside for two hours now and I felt great. Apple Watch was also reporting that I was doing a lot of cardio – which meant I was also getting the exercise I’m so enjoying at the moment.

Then the next door neighbour’s son came out to help me fill bins three and four up and for a couple of hours we chatted and got to know each other a bit better – all the while chopping and sawing at branches and talking about fishing, cars, computers, and work.

Then yet another neighbour drove past and stopped to say ‘Hi’. Quite out of the blue she told me she’d been reading my posts (I had no idea that any of my neighbours knew about my blog – but via Slimming World word appears to have spread!) and that she was amazed at how much I’d lost – telling me that she too was trying to lose weight and that it was really encouraging to see me out and about walking.

Like most people in modern life I never really talk to the neighbours much. It’s not because I don’t like them – it just never seems to happen.

In the past I used to come home with my provisions after work, shut the door and usually not open it again until it was time to go to back the next day. Even after I lost my job I never really found the time to say hello other than in passing – but already today, just by getting involved and saying ‘yes’ rather than ‘no’ I’d spoken at length to several of my neighbours, children and partners.

When we filled the fourth green bin and another neighbour returned from work I upped the chat count once more and asked whether I could fill his bin too.

By the time I’d had enough for the day I’d been outside chopping, packing, pulling, snipping, talking, drinking coffee and just generally enjoying bringing order to the world for four and half hours – 62 minutes of which my watch considers to be good exercise – so who am I to argue!

I still have a bit more to do in the morning to finish the job, but once it’s done I’m going to feel a real sense of accomplishment – not just because my overgrown topiary is finally gone but because of the following:

So – it’s been a good day Internet. If your garden needs a pre-emptive strike before the grass begins to grow again I suggest that you have a go now, and have a natter with passers by while you do.

You never know what you’ll learn about each other!