For the second Friday in a row I haven’t been stressing about pounds and ounces, and it’s an odd feeling. I woke up this morning (Saturday) and was again completely stress free about standing on the scales – and it’s not because I don’t want to lose weight. It’s something else entirely and I’m not completely sure what that is.

I do know that in a relatively short space of time I’ve felt a rather profound change in my attitudes towards exercise and how it makes me feel.

Frankly I’ve never felt like this before in my entire life.

The reason for my shift in focus is as much a mystery to me as anyone who may be reading – but ever since my Apple Watch challenge a couple of weeks ago (which entailed filling all three of my activity rings for a whole week) my focus has moved from pounds and ounces to making absolutely sure that my day contains enough of the right type of movement. 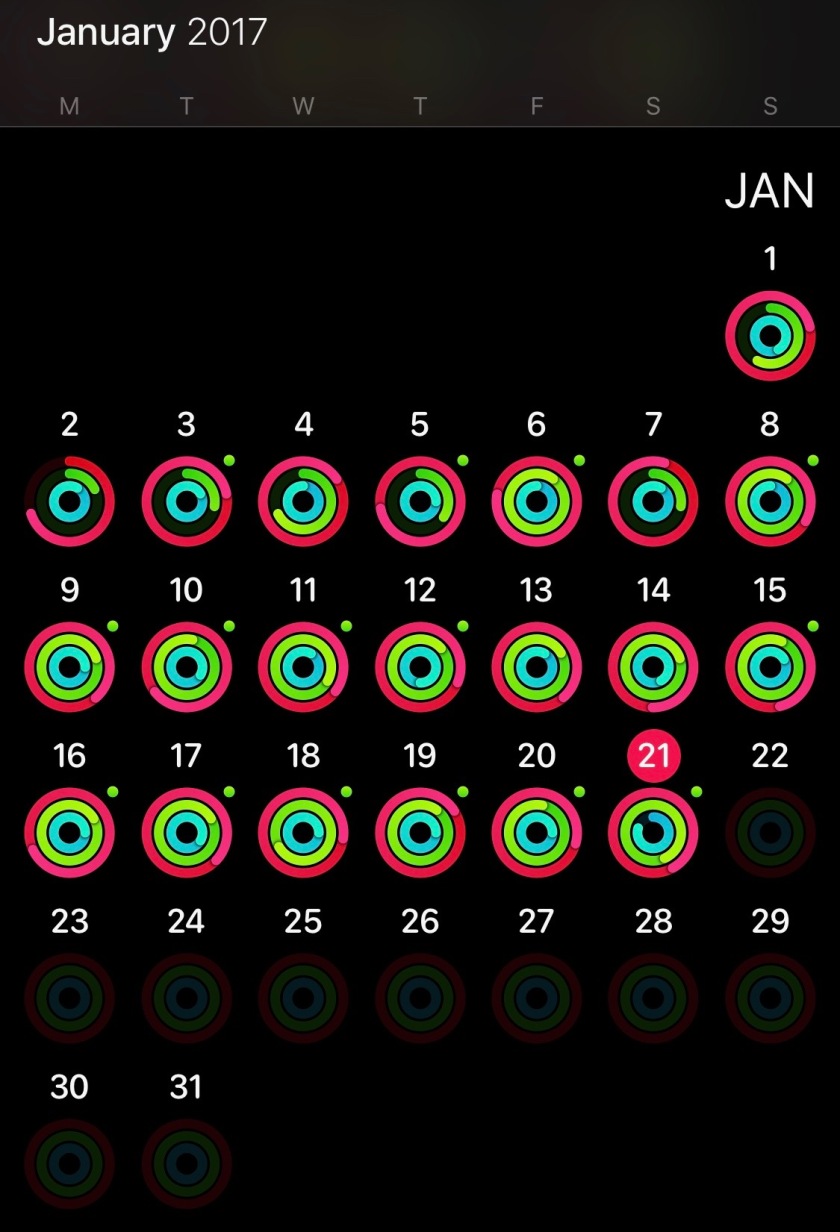 Although I’ve walked some epic distances lately (I’m at around 1000 miles walked since I joined Slimming World in April last year) one thing I’ve not really paid attention to is the cardio element of my exercise.

I’ve not consciously avoided it – but crucially I’ve also never proactively sought it out either.

As you can see in January (the start of the month is pretty typical of most months preceding it) there’s been a significant shift in my behaviour in the area of my green exercise ring.

This is clearly having a continued positive impact on my blood sugar. I’m still not taking any medication for my diabetes and since the 10th Jan I have been managing my condition with diet and exercise alone. The list below is measured in mmol/L (millimoles per litre) and should be between 4-7 to qualify as ‘normal’.

Although my change in exercise behaviour initially slowed my weight loss – this week the pendulum unexpectedly swung back in the opposite direction and I lost a whopping 6lbs on the Slimming World scales this morning. 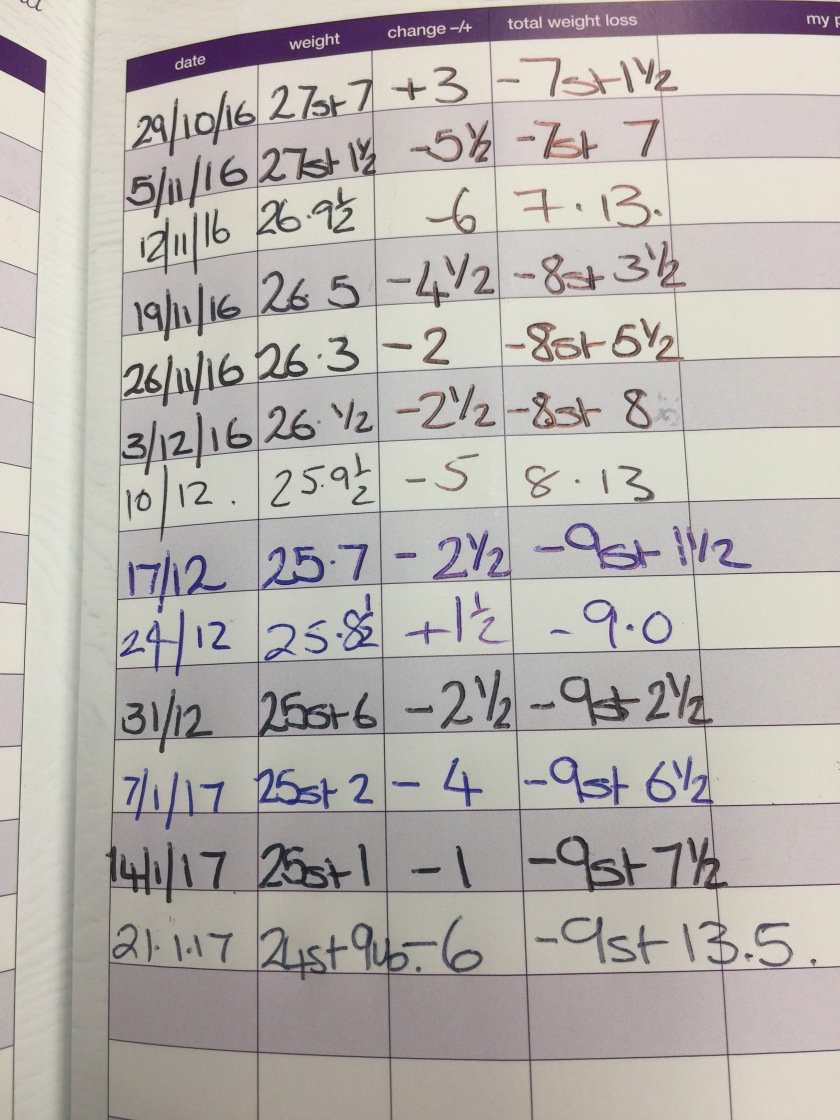 As long as my body doesn’t circle the wagons next week and slow right down I am (seemingly out of nowhere) on target to hit my 10 stone goal by the end of January. I have one more weigh in to do it and for it to happen I only need to lose half a pound.

I’m not going to be complacent though. I need to remain focused and keep exercising whilst following the plan. No celebration meals, or belt busting treats for me. I started the day as I meant to go on – with a 35 minute hill climb on my exercise bike at 9am.

I’ve found that as long as I don’t do this EVERY day I am seeing tangible improvements each time I do this. My heart rate is now lower, I can go a bit faster, and for a bit longer than I could only two short weeks ago.

I’m still not loving the bike however. It’s a means to an end at the moment.

My first love is still walking and thankfully the ladies at Slimming World have my back. They know of my weakness for little waggy things with four legs and wet noses and strolling in the park. 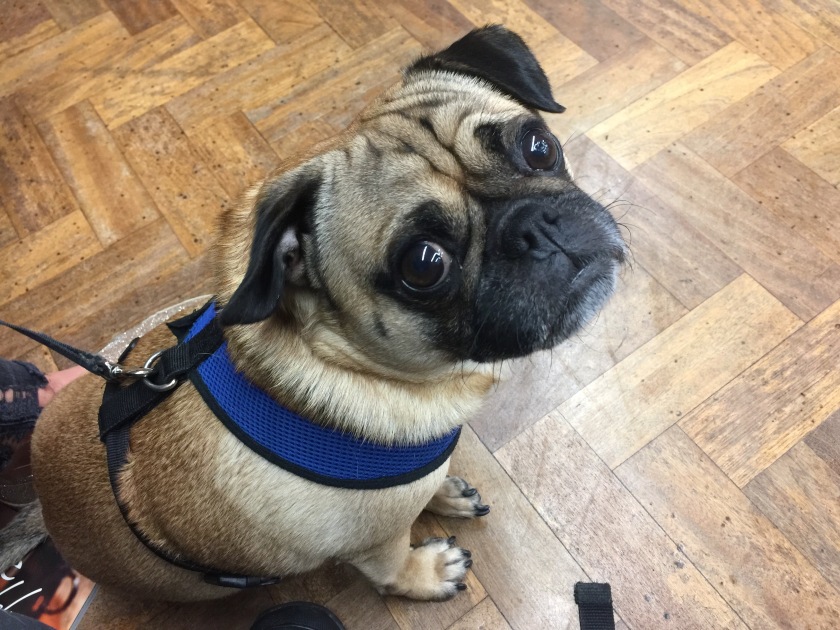 Today I’d arranged for a walk with a fellow slimmer after group and despite my assurances that I may steal her dog and take him home as my own my companion still brought little Pugly along with us today.

He’s an outrageously cute little fellow – and absolutely full of beans. He also appeared to take quite a shine to Angie (our always buoyant SW leader) in group today – which is totally understandable. He’s a good judge of character.

He’s a little more nervous of other dogs however, but is quite a plucky chap and only turned tail to run when an extremely playful black labrador decided that Pugly would be the object of his affections. Honestly I doubt logistically either of them could have pulled that feat off – so he was never in any peril.

I’m not sure the same could be said for my Swanling however – who was finally around to say hello for the first time in weeks today. He/She (I don’t know which since there’s still no sign of a handbag or a briefcase) was hissing almost immediately, and was shortly after joined by the other two swans, who looked like they didn’t like poor Pugly at all.

My four legged comrade wasn’t quite so chipper and inquisitive four miles later however. His enthusiasm was definitely on the wane as on the third lap he slowly began to lag further and further behind. Having little legs clearly has a bearing on distance capability and his appeared to be giving up the ghost somewhat by the time we headed back to my companion’s car.

By the end of it though we’d walked for about an hour and 45 mins, rattled off a relaxed four miles and had both had a lovely chat. We said our goodbyes, wished each other the best for the week ahead and started making our respective ways home.

In my case as I walked to my house all I could think of was food.  I’d missed breakfast before my weigh in and I doubt that much on the planet would have been capable of standing in between me and lunch – which in my case was going to be a beef and vegetable chilli.

I dont have rice with mine (mostly because I try to limit carbs wherever I can) and instead bulk it up with LOADS of speed food. I limit the meat intake by adding chick peas and split it over two really healthy and filling meals.

The ingredients for today’s chilli were (with calorie values on NON speed foods):

The non-speed food adds up to 1535 kcal. I rarely bother counting the other veg – but it’s minimal.

This seems like a lot – and for me it’s two large and very very filling meals. I’m also fully aware this means I will today be eating significantly larger portions than many other people reading this. Crucially however, I can eat all of this today and remain (even if I didn’t exercise) fully in plan.

I may have some natural yogurt and frozen berries later tonight – but it’s highly unlikely that my day’s intake will exceed 1800 calories.

According to Apple Watch I have already burned 1464 active calories out of a total of 3800 kcal, and its only 4pm.

The reason that I’m going into this fine level of detail is that half way through writing this I realised why I’m not stressed any more on a Friday.

Although I’m following Slimming World for simplicity I realised a while back that I needed to understand exactly what speed, free and syn REALLY means in the real world, so that I don’t worry and guess all the time (and potentially overdo it) and then face unexpected disappointment.

I may have a week here and there where my body decides to slow down – but crucially I know that even with this generous amount of food for the day (and I know that one day I’m going to have to look at reducing this in order to become who I ultimately want to be) I am in control like never before.

So internet – that’s my day.

Emotionally I have a tough week ahead – and today was just the start I needed to make absolutely sure that I’m in the best place I can be mentally and physically to deal with it. With this in mind, as I reflect upon today I can say that without exaggeration I feel (in both of these respects) as good as I think I’ve ever felt at any time in my life.

I couldn’t ask for more than that!