As is now customary for a Friday my routine today has mostly revolved around quietly stressing about whether I’ve done enough to lose weight on Saturday morning.

For this reason alone I don’t think I’ve slept properly on a Friday for about nine months. I’m always like a cat on hot bricks – simultaneously wanting to stand on the scales and also not wanting to go anywhere near them.

I’ve noticed that I’ve fallen into a routine that I suspect most fellow slimmers will recognise. On Saturday afternoon I’m full of thoughts that mostly revolve around putting my feet up and having as big a dinner as I can possibly get away with. By the time Monday arrives I’m thinking that I need more vegetables and less meat followed by a bloody good walk, and by the time Thursday and Friday land I notice I’m eating smaller portions and walking loads. According to Apple Watch I’m almost at seven miles so far and the day’s not yet over.

People that I weigh in with are also never less than intensely focused as they stand in line – and often don’t say much until they know the good (or bad) news. It’s the fulcrum of the week for many of my fellow dieter’s emotional states – and I’m no different. It means a lot to ALL of us.

Last week there was a lady weighing in from anther group in just her pants and a vest to get the vital few ounces off that she needed – and while I was impressed by her willingness to disrobe in front of strangers (and to an extent I definitely understood the impulse) tomorrow I will have to make do with just taking off my coat and shoes.

None of the lovely ladies there need to be subjected to my expansive underpants just yet. I’m a long way from feeling confident enough to stand in front of a room full of people in just my trunks.

However I’m getting ever closer. I had three rather monumental little moments yesterday.

The first was that I took this rather boring and mundane photo.

You might ask why the empty inside of a suitcase warrants inclusion in my blog – and you’d be quite right to do so.

In April when I started going to Slimming World this suitcase was full (and I mean FULL – I could barely lift it off the wardrobe) of perfectly good clothes that I was no longer able to wear. Back then when I started I was wearing 8XL shirts and 66 inch waisted jeans. The sizes inside ranged from 7XL to 4XL and from a 60 inch waist all the way down to a 52 inch. It held around 15 pairs of jeans and trousers, 20+ shirts, a couple of tracksuits, 9 polo or teeshirts and a pullover.

Although two of the items that were in there are still a little snug, EVERYTHING THAT WAS IN THIS SUITCASE AND MY WARDROBE NOW EITHER FITS ME OR HAS BEEN TAKEN TO CHARITY BECAUSE IT’S TOO BIG.

The second was that (without realising it until much later) I smashed my mile walking lap time.

I’d agreed to go for a walk with an ex-colleague yesterday when we were chatting at our meal on Saturday, and for the second day in a row I found myself at Arrow Valley park to meet him. The weather since Wednesday has been a bit more misty – but despite the beard dew that this causes (I look like a wet Wookie after a few laps) it’s great for getting out of breath and sweaty because it’s nice and cool.

As I’d never walked with this person before I didn’t really know whether it was going to be brisk or sedate – but since I’m generally good with either these days I didn’t really mind which it turned out to be.

As it happened the pace he set was slightly quicker than I’m normally used to – but not at all unpleasantly so. We were still able to walk and talk perfectly well and had a fine old natter about lots and lots of things which ended (as most truly great things in life do) with coffee.

When I got home and checked my stats later in the evening I realised that I had cracked the 19 minute barrier and done the first mile in 18.37!!! 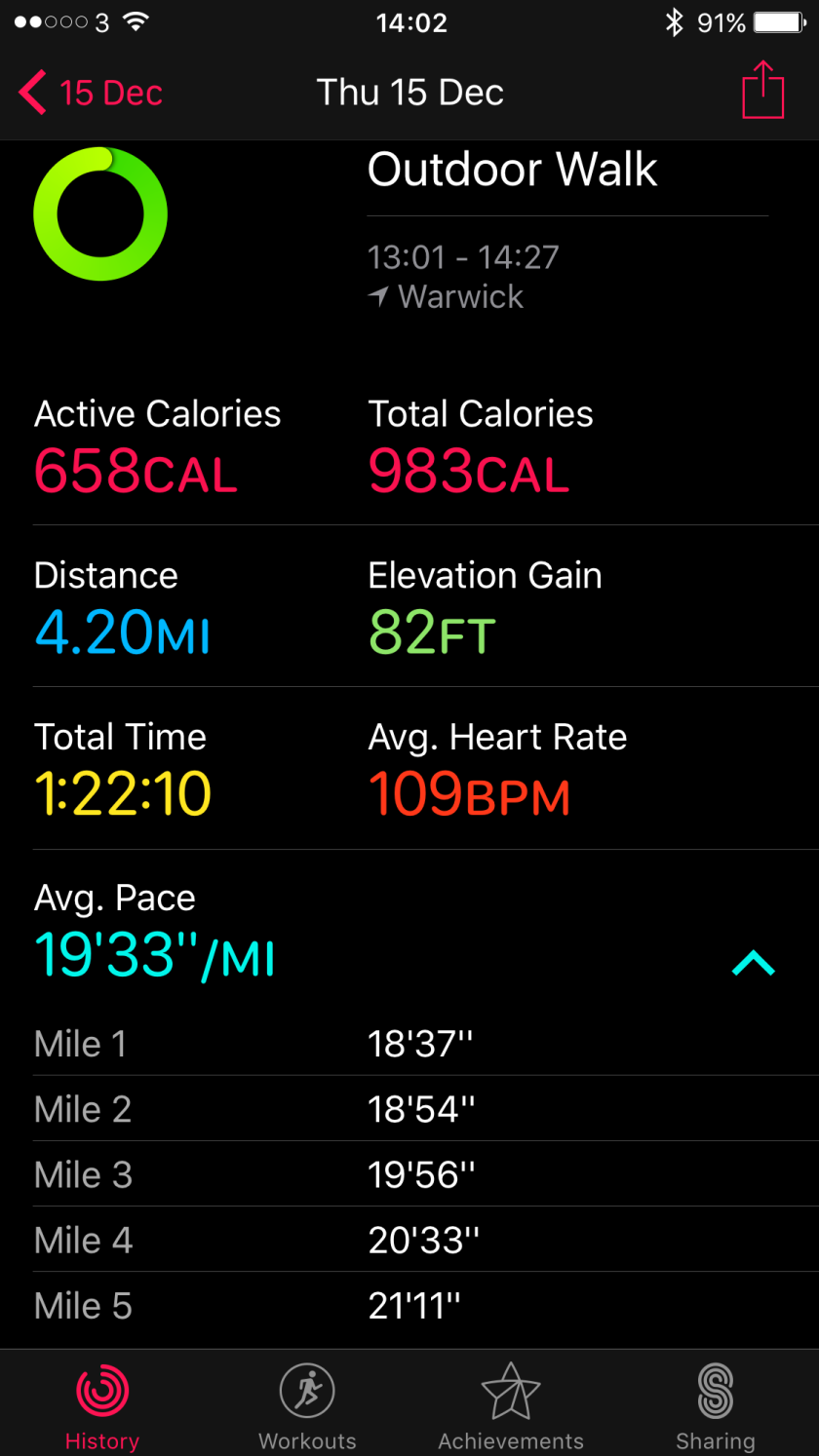 Honestly I was a bit surprised about this as I truly didn’t think that I had this in me (yet) – but it just goes to show what you can do if you put your mind to it.

Those with a long memory and lengthy patronage of my blog might remember my first attempt to track my fitness with a (rather crap and unreliable) application on my phone called Walkmeter. On June 3rd using this I recorded a slightly shorter lap of the route we walked yesterday, which shows that my average pace per mile back then was 40.09 minutes.

I’m now more than TWICE faster than I was on that day – and I was much slower before I began using technology to keep note of my achievements.

The third was that yesterday was ROGUE ONE DAY!!!

After months and months of salivating over trailers and teasers involving Darth Vader the 15th on December was finally the night that the release date crawled round. As I’d booked the tickets shortly after midnight when they became available a few weeks ago myself and four friends were front and centre to watch arguably one of the best films yet to come out of the franchise.

It was very different in tone to the main films (no John Williams music for instance) in many ways – but also instantly familiar in all the areas that mattered. It’s DNA is pure Star Wars and it definitely deserves your visit to the cinema.

Anyway – now I have some decisions to make. Tomorrow morning is not only weigh in day but it’s the Slimming World Christmas party, where we are all encouraged to wear festive attire and bring in something that we’ve cooked at home to share with the group.

I have a couple of ideas for what to do internet but as yet I can’t make up my mind.

Whatever happens I’ll take a few pictures of the culinary carnage and let you know how it goes. Either way I’ll be cooking something that I know I want to eat – so even if no-one else likes it then at least I’m guaranteed a pre-prepared lunch!

Fingers crossed it all goes well!