I unexpectedly found my happy place in some sprouts just now. I bought them last week thinking that I’d make them part of a recipe with some bacon, but never got around to making it. This afternoon though I suddenly had a hankering for their sweet but slightly bitter taste and decided that I was going to have a hot and filling comfort food lunch.

It’s a cold day and I thought it would just fit the bill.

I’ve said again and again to people (I did again this morning to a lady who I’m finding quite inspirational) I don’t really want to use my daily syns on junk food like chocolate or crisps and that I’d rather include them in my meals. At the moment this for me means very mundane things that some may not see as a treat – but a level tablespoon of set honey (which is 2.5 syns) in a hot fruit tea can make the difference between me feeling deprived or treated. I mostly have sweetener – but sometimes I pull the jar of honey out of the cupboard and indulge. When I do it tastes fantastic.

Today I was cooking with olive oil (6 syns for my level tbsp) and some flavoured rice thats been hanging around in my food cupboard for a while (I normally only use boil in the bag unflavoured rice but this is 2 syns).

The olive oil may seem like a waste of syns to many – but I have a lot of it left and very rarely use it. I’m doing so today because I’m both economising and because when I bought it I was probably being a little over cautious.

I’d heard some not so great things about spray oil and Soy Lecithin from a friend with some serious health issues.

I’ve since looked into it in a bit more depth and found that the UK (Dairy Crest) product Fry Light (both the sunflower AND olive oil varieties) contains Sunflower Lecithin which is an entirely different matter and has a wide range of health benefits not associated with the (often GM) Soy alternative widely used in the US.

(If you’re interested there is a broad overview here.)

Having done some research I think I’m switching back to the spray alternative as soon as this 1 litre bottle is done – although it’s not done me any harm so far. I’ve been using it for a few months and it’s about half way down. So far I’ve seen zero impact on my weight loss as I’ve been careful to add it to my daily ‘budget’. 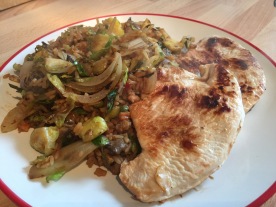 Once the mushrooms, onion and sprouts were fried down and soft I added some Worcestershire Sauce to the turkey steaks (a free food) and then mixed in the beef flavoured savoury rice with the veg. My ratios seem spot on here. At least 1/3 free food, 1/3 protein and 1/3 carbs. I washed it down with a pint of water and a large black coffee. This meal accounts for eight of my 20 syns available today and was flipping delicious.

Plus I feel stuffed.

I suppose I’m focusing on all this because I want to make a significant push in the coming week to meet one of my unspoken goals. I have a couple of weeks to do it and in order to get there I need to now have a very good couple of weeks – but I can still do it.

Today the scales at Slimming World said I had lost two pounds – which pushes me a little closer to my eight and a half stone award and also managed to net me the Slimmer of the Month award along with a sticker and a cool inspirational fridge magnet!

Honestly I couldn’t be happier with the way things are going at the moment. This morning I managed to get into yet another previously ‘snug’ shirt that I haven’t worn for almost eight years and I can’t put into words how good that feels.

Every time I post a selfie like this I’m almost duty bound to post another more awful one next to it to continually remind me where I was – as opposed to where I am now. There’s still a long way to go – but my word do I feel better.

Now internet – what to do for the rest of the day…? I might just go for a walk into town before the light fails.

Have a good Saturday 🙂