It’s been a drizzly and damp day today – and I guess maybe as a consequence the group this morning at Slimming World seemed smaller than usual. However they were no less bouyant or positive – regardless of the inclement weather outside.

There were a good few happy grins today as several ladies stepped off the scales with big smiles, having worked hard for some pretty significant losses.

Many have set a Christmas wish for themselves to reach a certain goal before the 24th of December. They all seem to be very motivated to get as much hard work out of the way as they can before the festive season when the twin spectres of mince pies and egg nog will no doubt descend to do battle with their good intentions.

For my part I’ve been rather reticent to make a seasonal wish. I’m slightly wary of targets and the impact they have on me if I don’t meet them.

Truthfully I do have a Christmas goal, which I voiced in the group this morning – but for the time being I want to otherwise keep it to myself. It’s nothing particularly heavy or serious – just something that I want to get done by a certain date. I’ve mentioned it to close friends in further detail along with my reasons, and for the moment thats more than enough for me.

I don’t want to jinx it.

I was no less excited than the ladies this morning however as I’ve been waiting for a few weeks for my stickers to be delivered to Angie to go with my last two certificates, and today they arrived. 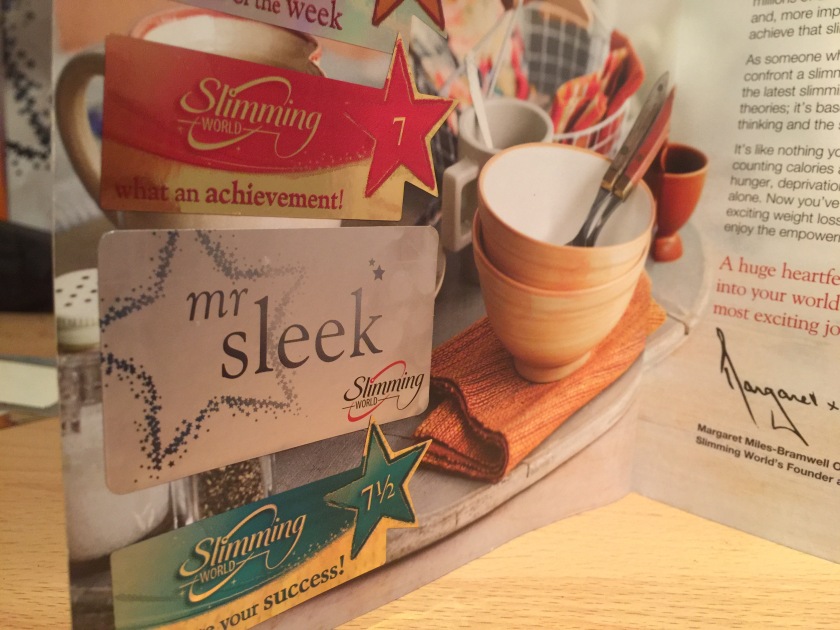 I’m not sure why these shiny little things mean so much to me – but I’m majorly addicted to putting them all over (and now inside) my SW record book. I’m like a cub scout with a new tea making badge when I get one. If I could sew it onto my shirt I probably would!

I very nearly got another one today too as I managed to get rid of another 6lbs this week, taking the total really close to eight stones lost.

I really didn’t expect the eight stone mark this week though – so I’m not in the least annoyed by the near miss – it will come next week hopefully.

One of the members today reminded me of my goals post (here) where at eight stone I’ve lost Miley Cyrus. However, I re-visited the photo I uploaded for that blog and it turns out I’ve actually already lost her as I’m now 111 pounds (50.5kg) lighter than when I started.

Miley will twerk in my trousers no more.

In fact I have less than half a stone to go and I’ve lost an entire Kim Kardashian!

Today was a success for more reasons than this however. Loosing weight is one thing, but getting a table at Coffee Architects in Leamington Spa is quite another.

This insanely trendy place on the high street is continually packed whenever I pass by and so far my attempts to go there and get a seat have been thwarted. Even getting a coffee is a challenge most days as the queue often means you have to stand on the pavement outside.

Angie today had mentioned it in group though and I decided that since I was heading in that direction to meet my brother anyway that I’d give it another go. I’m glad I did – the coffee there is absolutely divine, as is the food!

Since pretty much everything on the menu had some kind of syn contained within it I decided to live a little and indulge myself.

I chose the Billy Can Beans from the specials board.

I rarely use syns on convenience food or snacks – and I much prefer to factor them into meals like this one, which seems to me like a far healthier approach to eating. I feel far more virtuous after eating this than I would after a packet of french fries (4 syns) and a curlywurly (3.5 syns) in front of the telly, even though they may overall have less calorific content.

As I know (from Angie) the food here takes Slimming World into account I checked with the waitress what the syns of the two potato cakes came to and was told they were around 4.5 each. This tallied with others I could find in the SW app – and combined with the roughly half an avocado on top (which is 7 syns) I estimate this absolutely scrumptious meal came to 16 syns in total. The bacon rashers were already trimmed medallions (free) and as you see in the pic I cut all visible fat off. The beans were free foods.

What’s more as I walked back to my car I felt satisfied and happy. It was warming, just the right size – and perfect for a cold, rainy day.

I’m not sure what the rest of the weekend holds – but I’m pretty sure that CV writing will be a part of it. I have an interview at the job centre coming up early next week and I doubt they will be as happy as I am if I show up with my book full of stickers, expecting them to be impressed.

All I need to do now internet is decide what the hell I want to be when I grow up.