My companion and I couldn’t find the ruins of the abbey we were looking for. We’d followed all the markers leading to it on the little wooden posts in the park but our way now seemed blocked.

There was a padlocked gate, and a picture of a free grazing bull with large pointy looking horns nailed to a post near the impassible metal stile.

My friend’s pram didn’t seem like something we could easily lift over the fence and neither of us wanted to be chased by a bull – especially one with pointy horns.

The Arrow Valley Abbey and nearby nail museum (which I really want to see now purely because it’s a nail museum and seems wonderfully random) would have to wait for another day.

We resolved to turn around and walk around the nearby lake instead. Walking was walking, and wherever we were going was good exercise and a chance to chat.

As we walked the autumn colours were everywhere. The nearby Abbey Golf Course was filled with trees covered in rich aubern shades of brown and orange. It looked lovely – and little shafts of blue were peeping through the clouds. 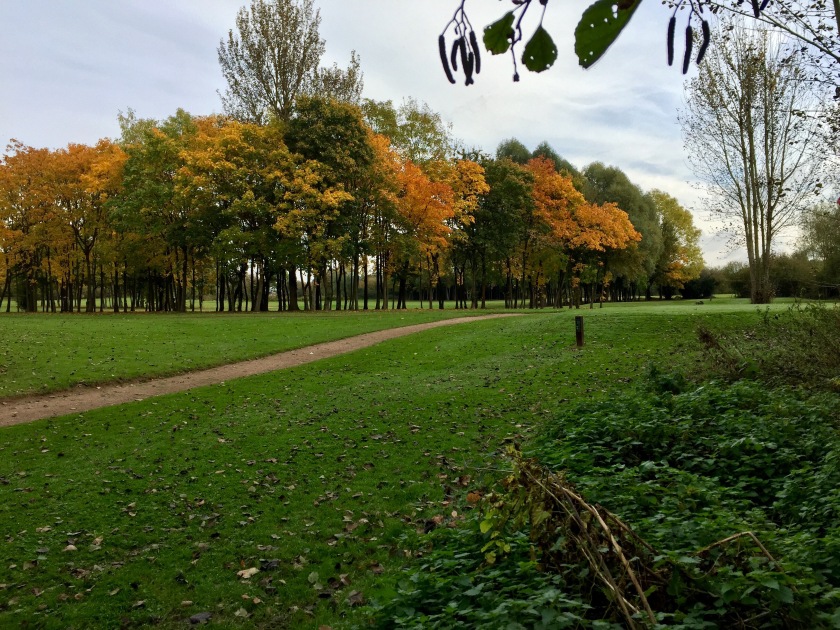 It was quiet and peaceful – and apart from the sound of some nearby ducks the parkland around us was almost completely silent.

‘Awww do you want to sleep?’ My friend attentively said to her toddler. He looked sleepy, and she adjusted the angle of the buggy and pulled the hood over so that he could nod off.

We carried on walking back to the lake, chatting. The paths were covered in leaves and as we walked underneath a road bridge I remarked that with the close bushes and tall black street lamp it looked like Woody Allen and Mia Farrow could stroll around the corner any minute.

A car rumbled past us on the road as we continued to walk, temporarily ruining the mental illusion of Central Park in the Autumn.

In front of us as we left the small meadow and crossed over a road there was an elderly man standing in a wooded grove next to a small white dog with a short pointy tail.

The dog was stationary and didn’t seem interested in moving in any particular direction.

‘He’s getting slower’ said the man to me and my companion as we passed him. We stopped, smiling to examine his portly Jack Russell.

The small waddling white dog at the end of the man’s lead was indeed moving slowly – and seemed preoccupied with a scent in the grass which had rooted him to the spot. He had his nose buried there, investigating.

‘He’s sixteen now. Getting on a bit.’

We all smiled at the dog. He looked cute.

The white haired dog walker was casually dressed with a shiny sky blue tracksuit top that was zipped up to the chin. It had a circular Birmingham City Football Club logo on the left breast.

‘We got him from Birmingham dogs home’ he said with a beaming grin full of big white teeth.

‘He was a rescue. Brought in with another dog who died the same day. They’d burned him over half his body and dislocated this one’s back leg. Tortured them for ten days these yobs had in a derelict house. You wouldn’t believe it.’

I paused. This wasn’t the usual dog walker’s banter.

I looked at my friend. She was nodding at him and didn’t seem worried. I sipped my coffee.

‘I went back to the home every day for three weeks to see him with my disabled wife on the train to be sure we’d get him’ he said.

The man smiled – he had a broad grin and a mouth filled with large white teeth. His hair was neatly combed and under his darker blue tracksuit bottoms were an even darker blue canvas pair of slip on plimsolls with clean white rubber soles.

‘When we eventually went to get him these yobs turned up and tried to drag him out of my wife’s arms’ he continued. ‘A disabled woman’s arms. Two of em. You wouldn’t believe it.’

I shook my head and looked politely incredulous. His disabled wife wrestling with two yobs over a Jack Russel with a dislocated leg in a dogs home.

‘I lost it.’ He said, looking at the dog, who was now pulling toward another scent, making the red dog lead taut in his owner’s hand.

He looks back at us. ‘Back then I’d had a head injury. I thought I was Rambo’ he mused.

‘No – I REALLY thought I was Rambo.’ He confirmed.

I silently nodded again. Rambo. Got it. Ok.

‘Broke one guy’s ankle and nose, broke the other guy’s arm and face – made a real mess of ’em. They called the police. You wouldn’t believe it.’

My friend started gently rolling her pram back and forth to keep her toddler asleep.

‘The people in the dogs home had to drag me off. Told me to leave and said they’d tell the police they didn’t know who did it.’

He paused to look at both of us, gauging the reaction. I looked at my friend again. She was still nodding.

I smiled and nodded as well.

‘I went to a cafe up the road in Digbeth – I knew the guy there – and bought him a sausage.’ He reminisced. ‘Big sausage. This long!’ He motioned with his hands.

It looked like about six inches. A lot of sausage for a Jack Russell.

We all continued to focus on the dog. He looked like he’d had quite a few sausages since that day – and was sniffing some leaves.

‘I felt a little guilty about three hours later’ he continued ‘and I called the dogs home in case they’d got into trouble. The man said the police didn’t care once they heard what the yobs had done to the dogs.’

He smiled. He obviously felt he had done a good deed.

‘They never forgot me after that – got a card from them every Christmas’ he said.

‘They all know me.’ He said proudly.

‘I’m the dog man of Arrow Valley’ the mad said grinning with lots of teeth.

My friend laughed along with him and we all looked at the plump Jack Russell – now in another bush investigating what was there. He turned and looked up at us expectantly.

‘You know them calls? The PPI calls? He knows. You wouldn’t believe it.’

My companion continued to nod, rocking the pushchair slowly. I nodded too and sipped my flask of coffee.

‘We ‘ent learned him to press the button on the phone – but he knows. He hears the phone ringing when it’s them, knocks it off the cradle and starts talking to them.’

We continued to look at the dog, smiling. He was standing on the path now, looking bored.

‘Ow wow wow ow woow wow he sez to them. He does – you wouldn’t believe it!’

The Jack Russel looked up at him. There seemed to be a brief flicker of understanding.

‘Course the wife never liked the name the dogs home gave him.’ He mused. ‘Called him Rooney. She likes Manchester United. Did it just to wind me up’.

He motioned to the football club logo on his left breast. ‘You wouldn’t believe it.’ He said again.

I bent down to stroke the pooch. He had a little pink bone shaped tag on his collar with ‘ROONEY’ engraved on it.

‘Well – better go! Nice to meet you!’ He said, and just like that the dog man of Arrow Valley was gone, with his reluctant Jack Russell waddling slowly behind.

We continued our walk around the lake.