A friend said to me tonight that they were struggling to look at the future in a positive light – and for a while we talked about all the good things that they had either currently happening or that could happen to them in the coming months and years.

Hopefully after we chatted this person’s fears were abated. They deserve to be happy in my humble opinion and I think they will do very well in life thank you very much.

I will admit though to feeling a bit of a fraud sometimes when I try to cheer someone up or give advice that highlights other people’s best qualities.

I said as much to my friend.

I’m absolutely useless at taking my own pep talks – and for every time I’ve tried to convince someone else that life is good I’ve had several instances where I doubt myself or judge my own efforts harshly.

The problem I think is a deep rooted (possibly healthy, possibly not) paranoia that I’ll fail, backslide, get depressed, go back to my old habits and confirm my worst fears about my lack of ability to succeed in life.

At the moment I’m pushing myself really hard with exercise and focusing hugely on how many pounds I’ve lost.

Rational Dave knows that he’s doing well. This calm and measured part of me is very happy that in five months he’s lost almost six stone. Furthermore the lengthy distances he can now walk are cause for much back patting.

He’s getting out a lot and socialising every day.

Emotional Dave on the other hand is terrified that on Saturday morning he will not have lost weight – or even worse put some back on. He’s been walking everywhere as much as he can all week (and has 5 blisters to prove it.) If he doesn’t get up and propel his fat ass at least five miles forward every day he thinks he’s not doing enough.

He’s also probably becoming a bit too obsessed with fitness stats and honestly needs to wind his neck in a bit.

This morning I walked into Leamington for a coffee with a friend, around town for a bit, and then back again. My friend seemed like he’d had a good workout and I was definitely hot and sweaty.

Shortly after this an unexpected (and lovely) phonecall meant my trip into town was followed with a drink with another mate at the Hatton Arms.

As I drove home from my lunchtime catch up I kept saying to myself ‘you haven’t done enough!’

Yesterday evening I went for a walk in the park and my legs were tired and kept cramping. I had to keep stopping and I didn’t have the energy I expected to have. I only did four miles yesterday. I was annoyed with myself.

So I stopped at the park on the way home from Hatton this afternoon and walked another two and a half miles, bringing the total from my various activities to around nine miles.

The result of this is I’m aching all over – although honestly I DO feel good. Despite the blisters.

(Thinks for a while and stares at the wall.)

(Literally, not figuratively. It’s a calming wall. I like it.)

Maybe this isn’t all bad.

Maybe I just think too much, and I need to work on taking my own advice as much as working on my fitness.

I should probably just be glad that I’m so driven at the moment, and happy that I don’t see sitting on my ass all day as a fruitful use of my time anymore.

Maybe this is what other ‘normal’ people (I know they don’t REALLY exist) do? Who knows?

I do know one thing. My friend told me today that my shirt looked too big for me.

That felt good. Really good. That wouldn’t have happened five months ago.

Maybe I should take a leaf out of the metaphorical (and waterproof) book belonging to the independent little swanling at the park.

When I walked past it today its bottom was in the air as it foraged on the river bed for food. It’s undercarriage is slowly tuning white – but for the moment it’s still a youthful dappled fawn colour.

It didn’t care that it’s bum was in the air – and it seemed carefree and happy.

When I walked to the river edge it came closer (probably expecting food) and rested its head on the bank looking at me as little droplets of water rolled off its head onto its beak. 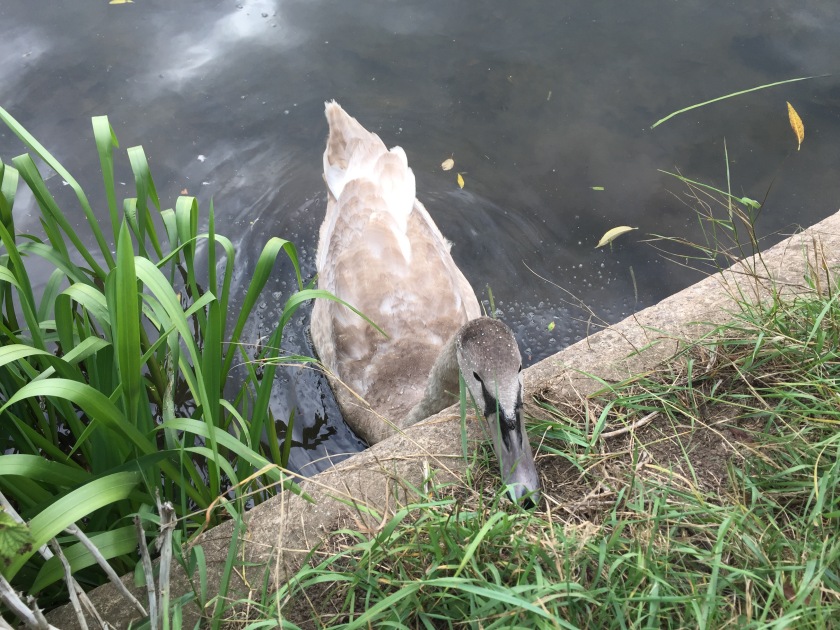 I love this animal.

It’s serene and calm but also a survivor.

It’s outlived its four siblings and prospered, growing stronger and more self reliant day by day.

It’s been blossoming alongside me in the park as I’ve changed and grown in confidence and ability myself. In a way I feel linked to it.

I just need to keep sticking my own ass in the air and putting my head down to the task at hand – not caring who sees my undercarriage and stop stressing. Things will sort themselves out whether I gain a pound or loose a pound.

The only thing I’m going to try and cut down on internet is feeling guilty. Like I said to my friend – I need to take my own advice.