Keeping a diary, journal or blog helps fitness and weight loss. I can’t say it any simpler than that.

If nothing else it’s a brilliant way to note just what you did previously, EXACTLY how you felt at that moment and what it means for continued improvement.

To be fair though I’m unlikely to forget my walks in Wales over the last few days. Yesterday was cramp city.

I had a couple of things planned for the day but without warning both of them were cancelled and I ended up spending the whole day watching movies or sleeping. Although this made me feel a bit guilty (I also had the munchies and ate three epic meals) I’m glad I did as today I felt all of the benefits from my Welsh hill walking and seaside strolls.

This morning an ex-colleague (now they’re all just friends – which I’m still getting used to!) came over with his pooch ‘freckles’ for a walk around the park and I could definitely sense some fitness progress. Almost nothing was cramping – although I felt generally quite stiff in my upper body and back which is unusual as all the effort this week has been in my legs.

Thankfully my mind was taken off every ache and pain while my mate and I chatted on a bench or two. His pooch sniffed and licked me at every opportunity and stared expectantly for some petting, which I’m happy to say she got a lot of.

After a couple of laps we headed for Starbucks (mainly because they have outside seating where freckles could have a bowl of water) and sat chatting in the shade.

It was great to catch up – and before we knew it almost four hours had passed!

My mate was due to pick up his wife for a visit to the cinema and after a bear hug he headed back home with freckles sitting in her comfortable dog basket in the back of the car.

When I came home I was surprised how much get up and go I still had, so I decided rather than waste it that I’d test my limits a bit and go immediately for another walk to the Saxon Mill – a local pub about a mile from me with a picturesque water mill and bridge. 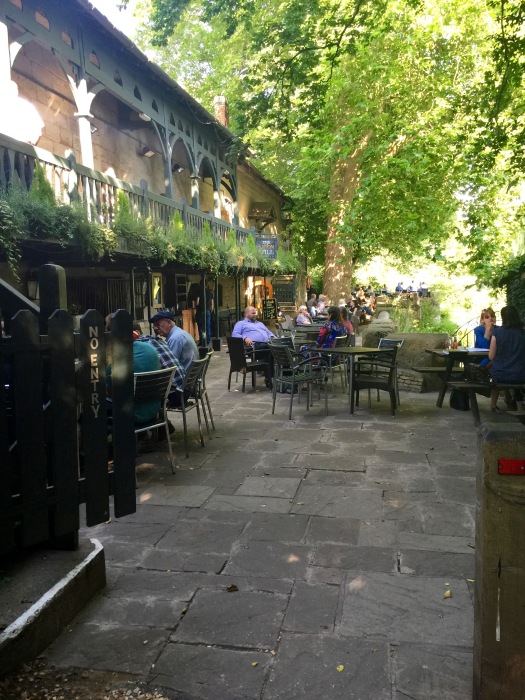 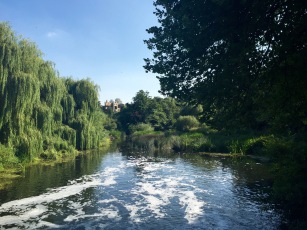 Oddly my walk there was characterised by cramp in my left shin. For some reason my right never cramps at all – but I have one leg shorter than the other so this is probably the problem. Upon arrival I sat down for a while in the shade and started the usual tiresome balancing act between getting rid of cramp and getting up before my plantar heel pain starts.

It’s my own fault for being a tubby lop sided mutant.

I had originally intended to just walk back home – but it seemed silly not to explore a little further. In the (distant) past I’ve walked through the field behind to a picturesque little church which looks awesome at dusk.

I’d never followed the river however and had no idea at all where that came out. It was hot and there wasn’t much shade but I’d not long re-applied my factor 50, so it would probably be ok. 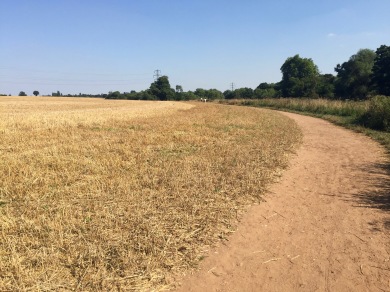 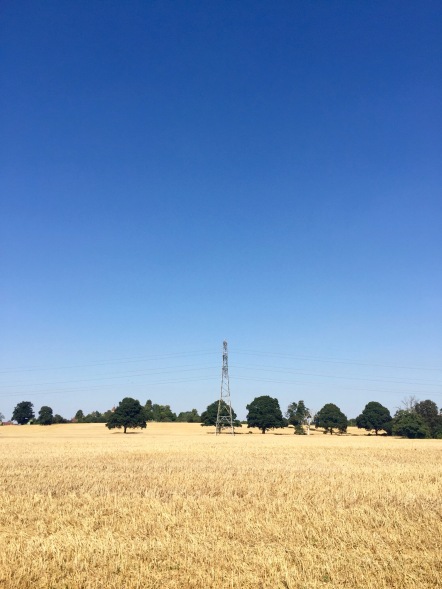 Oddly now all of my cramp was gone – and I felt (after sitting for 20 mins) re-energised. I followed the path, checking my walkmeter app from time to time to see where I was going. It didn’t look like I was going to end up where I thought I would…

After some gentle strolling and a little hill climb I noticing two ladies emerging from bushes. 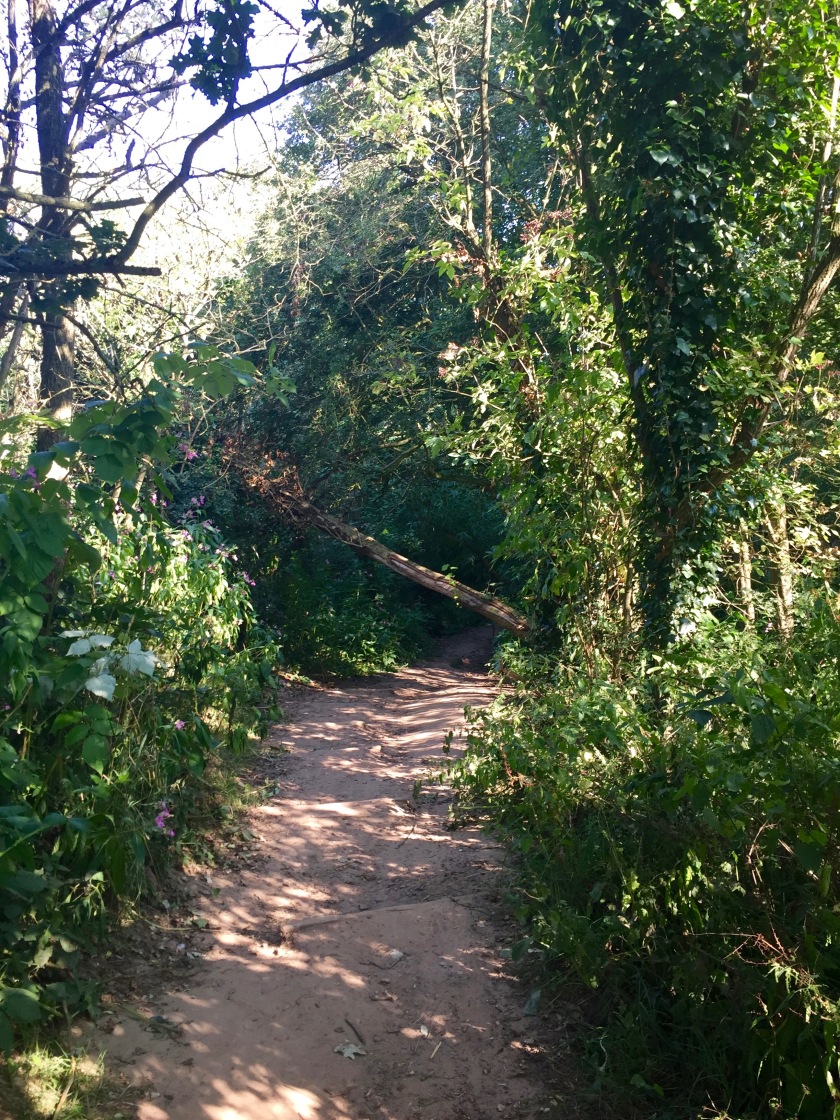 Initially thinking there had been some hanky-panky going on (one was straightening her dress hurriedly) I realised that instead they had been on a path back to civilisation via a tiny culvert. When I followed it this emerged into a well to do cul-de-sac. I checked my map again and this road would eventually lead me to Old Milverton and the War Cemetery, which was half way to Leamington…

Clearly I was entering new fitness territory. My app noted I’d already walked just under two miles, which added to the 2.5 miles around the park earlier meant that I had done 4.5 miles already – and I still had a way to go before I was home.

I noticed some nearby children going into a local shop and followed suit to get a cold drink.

It was a REALLY warm afternoon, and the cool of the shop was absolutely wonderful. I slightly regretted this though when the bottle of Diet Coke I had purchased exploded all over my chest and stomach shortly after I opened it, making me look like I had major trouble finding my mouth.

As I did this a guy in a silver Mercedes van helpfully slowed down beside me to lower his passenger side window and call me a ‘fat c**t’ while he drove by – but to be honest today I couldn’t have cared less.

In total today by the time I got home I had walked five and a half miles. According to Apple Watch (by 6pm) during that time I also burned 1403kcal during exercise with a total of 4,743kcal expended, did 14,790 steps and completed 35 minutes of exercise that significantly raised my pulse above normal walking.

Let me just take a minute here, and rewind time. On June the 3rd I was ecstatic about beating my personal target of completing six miles in a week. I had instead done 7. At the time I was 33 stone exactly. I was doing a mile in around 45-50 minutes with lots of stops and it REALLY hurt.

According to my app (I did pause it for a rest occasionally when i stopped to sit) I now do a mile in approximately 30 mins flat. What’s more – I still have energy. I’m not a complete wreck, and at the moment I feel great.

So internet – here’s to the power of blogging and logging. It’s genuinely useful if you’re in my shoes. It’s not easy to do when you’re feeling like something someone just stepped in and your confidence is low – but as things improve there’s an ever growing sense of satisfaction about making the right choices and just enjoying the ever improving you.

Here’s to the next milestone – whatever that is!