The last couple of days have felt a bit odd. Some parts of me are supremely relaxed, while others are quietly panicking about not having a job anymore.

It’s an odd sensation – and I didn’t feel the way I expected to when I woke up on Monday. It isn’t like I’ve never had a day off before – but oddly every part of me felt like I should be getting in my car and driving to the office.

I suppose I could if I wanted to, but they wouldn’t let me in any more, so instead I have (over the last two days) set about quietly bringing order to my life.

It didn’t start that way. I was actually exploring my wardrobe whilst listening to some chilled Ella Fitzgerald after the wedding shirt suddenly became wearable at the weekend. I wondered what else fitted, and decided to have a hunt through the huge suitcase of clothes on top of my closet that’s been forgotten and covered in dust for years.

As soon as I started to find pairs of jeans and shirts that now fitted me I realised how my weight had changed my house and what’s in it.

I have a MASSIVE wardrobe in my bedroom. Well, it’s two identical IKEA ones actually, pushed together so it looks like one huge one. When I looked inside it yesterday afternoon I realised that about 1/6th of it was actually being used for clothes. The rest was boxes of…

Well I didn’t know what was in the boxes actually – so I started opening them.

Some of them have been sitting in in my wardrobe since 2009. I know this because they were full of dated bank statements, insurance letters, paid bills, phone contracts, receipts – in fact absolutely anything from that date onwards that I couldn’t be bothered with filing correctly or disposing of. It’s just been piled together as my mind began to mirror my physical agility.

I can see from the items contained in them the point where I stopped caring about a lot of things and started to mentally sink lower as the weight piled on.

The clothes took up less and less space as the number of items I could wear slowly reduced. Eventually I washed and wore most of it – so it lived on the clothes horse downstairs, or on the back of a dining room chair, rather than in my wardrobe – which now seems to be full of dusty crap, and hasn’t been explored for a long time.

So – as I took clothes that would soon fit me from the suitcase I also removed potential rubbish from the wardrobe to sift through and throw away.

The truth of the matter is that I’m a bit of a magpie. I’m not a hoarder like my mother was, but I do like to keep memories and things to refer back to in years to come. This can be a good AND a bad habit.

Sometimes the memories are unexpected – like the unopened letter I found further down the pile from my mother that arrived while she was still alive in 2010. It contained £20 ‘for petrol’ and suggested that we should move our relationship to a ‘brother and sister’ footing because mother and son wasn’t working.

She didn’t have my address at that point and hadn’t for three years because I couldn’t take any more of her abusive or strange behaviour. It had therefore been sent from Birmingham to my father in Wales and then forwarded by him to me in Warwick, where like many others it remained in a pile, unopened.

Her reasoning behind the rather odd proposed change in familial status was unclear – but in her mind it would fix whatever was wrong between us. It wasn’t long before further down the dusty box I also found other more confrontational examples of her correspondence which indicated that her idea wasn’t much more than a passing thought.

I photographed the letter, put it in with the other papers for recycling and spent her £20 this afternoon on petrol as she suggested.

I sometimes think I’m supposed to find meaning in things like this, but I’ve pretty much realised that there isn’t any really. Where my mom is concerned there are only moments of normality and moments that make no sense – and thats about it.

I’ve learned the hard way that the only person that can provide closure in her absence is me – and that’s OK. I’m still trying to think good thoughts about her, and despite what became of our relationship there was love deep down – I’m sure of it.

I can see it in the photos from back when I was tiny – and even if later in life I struggled to see it in the woman I knew, I prefer the reality I have now. Whether it’s constructed or not it’s no longer destructive, just full of positivity.

Further down my boxes of crap were other reminders of the past. 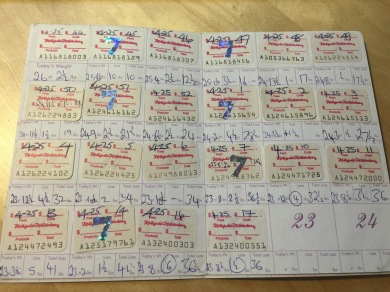 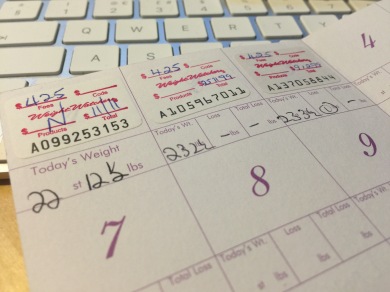 As an adult the very first time I tried to address my eating and drinking problems was when I lived in Wales on the 27th Jan 1999. I know this because it’s on the cover of my old Weight Watchers booklet.

Strangely I remember feeling heavy and immobile back then – but I was surprised to find that my starting weight was 26st 2.5lbs. The lowest I managed to get down to on that attempt was 23st 8lbs.

Shortly after I moved to Bristol – and after a rather epic row with my girlfriend in November of 1999 I went back to WW when I was 22st 12.5lbs. At the time my relationship with her was hitting the rocks, and there was a rather splendid kebab shop on my way home from work which consequently absorbed more than it’s fair share of my earnings. The second time I actually succeeded in putting weight on instead of loosing it, and finished that group at 23st 3.5lbs.

In another box I found a Boots weighing in slip from 2008, which charted a couple of months while I was on the Cambridge Diet (meal replacements – soups and shakes).

I know from old photos that my lowest recent recorded weight was 24st 5lb on the 3rd May 2008, and that shortly after I’d put all of it and more back on at the rate of a stone a month by Feb 2009.

All of this digging through boxes had moved me from a moment of success and jubilation over my new ‘wedding’ shirt finally fitting to sitting silently in my room, surrounded by dusty rubbish mentally kicking myself for what I’ve done with the last decade and how I’ve squandered my time and energy.

I know that thinking like this is unproductive, and I should give myself a break – but maybe I needed to see all this and remember it. Maybe I needed for a little while to feel betrayed by myself, and remember why I’m trying so hard at the moment.

More importantly it also makes me want to become a target member at Slimming World more than anything.

It’s so far away at the moment that when I think about it my mind turns in on itself with thoughts of the effort that lies ahead of me – but I NEED to get there. I NEED to go and stand on the scales every week, even when I’m at my goal. I NEED to remember all this and not make the same mistakes all over again.

So – cards on the table internet. I’m having a wobble of sorts, but nothing thats going to de-rail me.

I am taking everything in these dusty boxes that no longer has any relevance or hold on me to the tip after I’ve shredded them, and then I’m slowly going to get rid of the clothes and burn all the routes back to being 34st to the ground, blowing up all the bridges on the way.

One thing that all this HAS done is give me a new interim goal, which previously I didn’t have. I want to be 22st 12.5lbs or lighter, because I haven’t been that weight since before the millennium.

Pffft. I can do that standing on my head. Bring it on.