It’s Wednesday afternoon. Despite a damp start to the day it’s now become unexpectedly sunny with a cool breeze. There’s cloud cover but I’m taking no chances. Before I left work I covered my arms liberally with suntan lotion.

I’m sitting in a coffee shop, and for the last 30 minutes I’ve been watching people to relax myself. It’s fascinating and highly recommended. 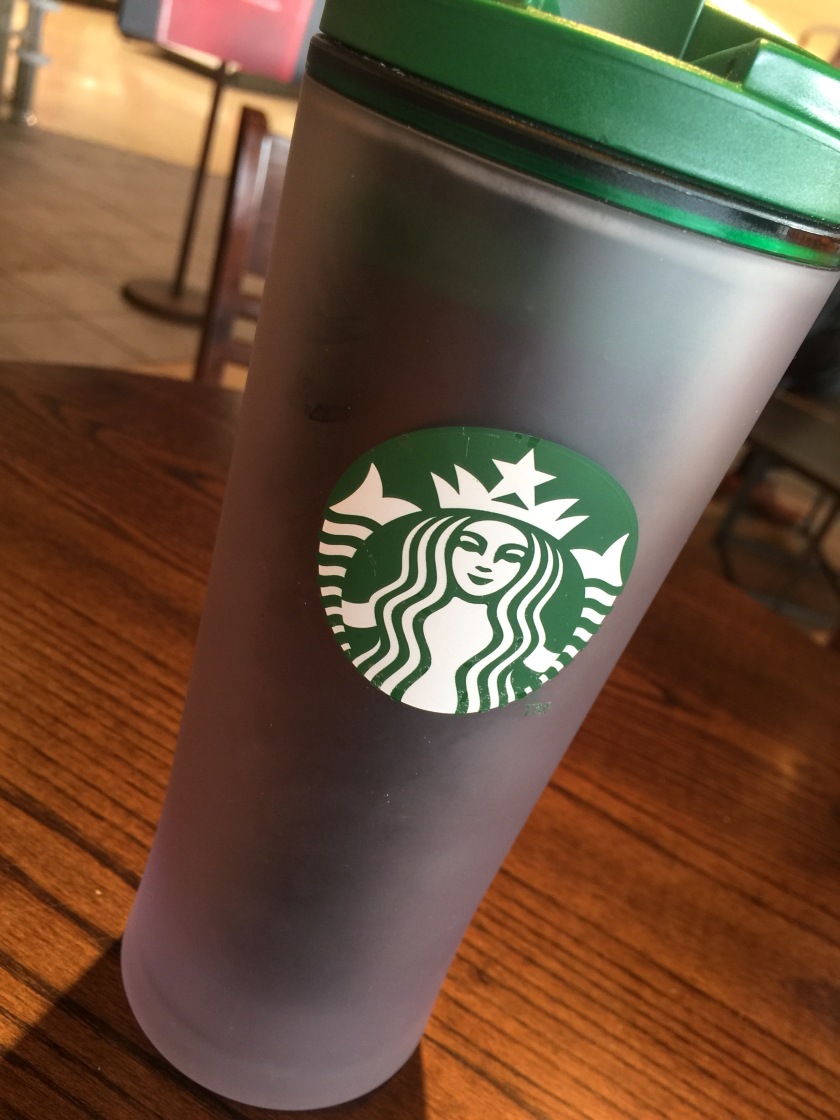 Behind me on a comfy bench there is a Polish sounding couple and their discussion is chugging along at a high tempo. The heavy set gentleman (boyfriend?) that the lady is talking to seems irritated and his girlfriend (?) has the tone of a woman discussing a toilet seat that has been left in the upright position.

He’s tapping the back of the bench quickly and displaying obvious irritation. I think his dinner may well already be in the dog, and judging by his body language he knows it.

In front of me a young Indian guy in a sharp blue suit with neatly coiffured hair (he looks like a go getter) is interviewing someone for a job of some kind.

His prospective employee has an ill fitting shirt and it’s tugging at his waist. I know this feeling well and I can see him occasionally re-adjust his shirt just above the belt to introduce a gap in the front – which sadly just tightens the back. The process is repeated at front and rear every few minutes. He looks nervous, and occasionally places his hands flat on his legs to tap them to an invisible beat.

Behind them is a man who may have Tourettes, although he’s most likely just anti social and doesn’t care who knows it. He came in with a 2 litre bottle of Pepsi and between him and his friend they drank the lot without buying a single beverage.

They played Pokemon Go for quite a while – discussing their monsters loudly behind the interviewing pair before they finally left to annoy other people.

I’m listening to the slow Jazz music in the background and wondering what I will do with my days next week when I have no work to fill them.

So far there’s a friend coming up to meet me on the 2nd which I’m looking forward to and another windswept and interesting chum has an art exhibition at the end of the week in Leamington so I’m going to that as well. I could also go to the cinema. I haven’t hidden in the pictures during the day for ages…

I think I may also try walking in the REAL world, and it occurred to me that to save yet more money I could try to stroll to the park, go once around it, and then walk back, instead of driving there and doing a couple of laps. It will save petrol, get me used to some gentle hill walking and be good exercise.

I’ve also got a lot to do in my back garden – which once again I’ve neglected. I’m sure I heard Tarzan out there last night swinging from vine to vine – and that’s not good. Cleaning up ape shit is a real nuisance, but excellent cardio depending on the quantity.

The fact is that I’m probably going to need to move my lardy ass twice as much next week. I’ve struggled with my mood (as I mentioned in the last post) but also my sleep since Monday. Drinking nothing but green tea hasn’t helped much either.

This has a bit of a corrosive effect on my willpower, and in an effort to stop myself going off the rails yesterday afternoon on the way home I stopped in at Marks & Spencer.

This is the wrong place to shop if I’m soon to be unemployed and in truth I’m a bit annoyed with myself.

The alternative though was a bag of chips – which I’d been fantasising about all the way home in the car – and having a bargaining dialogue with myself about how I would feel if I did it.

Would the disappointment in myself be worth the crime?

I’m not certain it would. I think it would actually do more harm than good. I get way more happy feelings from loosing weight than I do from the momentary pleasure of stuffing myself with fast food.

Plus, a new acquaintance from Slimming World posted in our Facebook group that she had gone for a burger in a bun on a night out. Afterwards she said she felt heavy, bloated and wishing she hadn’t.

Her post was on my mind when I bought some (free) ham pieces, some (speed) celery hearts and a pack of 6 (free) Jazz apples.

It was maybe a little further from my mind when I practically inhaled three 120g packs of (scrummy) ham, a 450g punnet of (free) cherry tomatoes and all 6 apples for dinner – but there we go.

It could have been way worse, but it still annoys me when I have ‘binge’ moments.

Although the food I chose limited the damage the impulse to overeat is very much still with me and I’m intensely irritated by what I perceive as a weakness.

I know that I’m being unreasonable with myself – and that I should forgive the inner me – but frankly sometimes I feel like I let the naughty little sod get away with far too much over the years and from time to time he deserves a bloody good spanking.

Maybe today is not the day though. I have more than enough to get through without needlessly beating myself up – and what happened last night can’t be taken back so I just need to carry on and not stress about it.

Tonight I am returning to some veg in the slow cooker which should have reduced enough by the time I get back to fit some frozen Quorn chicken pieces in with them. I’ll leave those in for half an hour then add some fresh coriander before watching more from season 4 of Downton Abbey (it makes me feel dirty but I love it 😄 !!!!)

Internet – If I don’t find out how Lady Mary is coping with inheriting Matthew’s share of the estate then I think I’ll just die!