I woke up with a mission today. Start the day the way I mean it to go on. Create my own positivity – especially where none exists.

I’ve put off mowing the front lawn for a while. I hate mowing the lawn.

I jumped (well, rolled a bit faster than usual) out of bed and put on my Apple Watch. This is extremely important. I use it to capture snapshots of the limited exercise that I do from day to day so that later on I can marvel smugly at how good I’ve been while I sit in front of the TV in my comfy armchair.

Since I can’t cut the lawn naked I also popped on my jogging bottoms and a teeshirt, headed downstairs, out of the back door and up the back garden to get the mower out of the shed.

This was much to the horror of the huge fat black cat that appeared to be fast asleep at the back of it behind my collection of antique broken strimmers.

I am pretty confident that we mutually scared the living **** out of each other when I opened the door. The hissing and panicked cat dived past me like a miniature panther in an attempt to escape and tubbily clawed its way over the garden fence to safety.

As momentarily scary and as unexpected as this encounter was, this finally explained the mysterious warping of the bottom of my shed door – which has been displaying a large and slowly widening gap recently.

I checked quickly. The cat had not stolen anything, and I could see no evidence of criminal activity. Sadly the lawn mower was still there.

I picked it up, locked the shed and carried it to the front of the house.

There’s method in my madness when it comes to doing the front first, even though the back is closer. My front lawn is completely in shade until late morning and I won’t burn.

Just in case (since I usually go red faster than an albino in a furnace) I’d already liberally covered myself in factor 50.

In the past I have taken my kitchen step stool to the front of the house so that I could sit down periodically when I was out of breath – or when my back was beginning to hurt too much. I used to need to park my bottom up to five times when doing the front lawn and was usually drenched in sweat by the end.

I decided to leave the seat where it was and see how things went.

This morning I mowed the front lawn without a break, or sitting. Once finished I looked at it, decided I could make it a bit trimmer, and then did it a second time on a lower height to make it really neat.

How cool is that?

If I deconstruct my feelings on the subject, maybe I don’t hate mowing the lawn after all – otherwise I wouldn’t care about going over it a second time.

Maybe I’m just scared of what it represented, and the pain I felt during the task. This was also compounded by the embarrassment I felt when my neighbours and their kids saw me struggle with something others take for granted.

In reality I actually like the end result and it makes me feel happy and positive to see it nice and neat.

Once this was done, and since I wasn’t a palpitating mess close to cardiac arrest I decided to do the washing up, clean the kitchen, prepare a chicken curry stew and have a nice breakfast. Before anything else was done however I needed to ingest the most important food group. 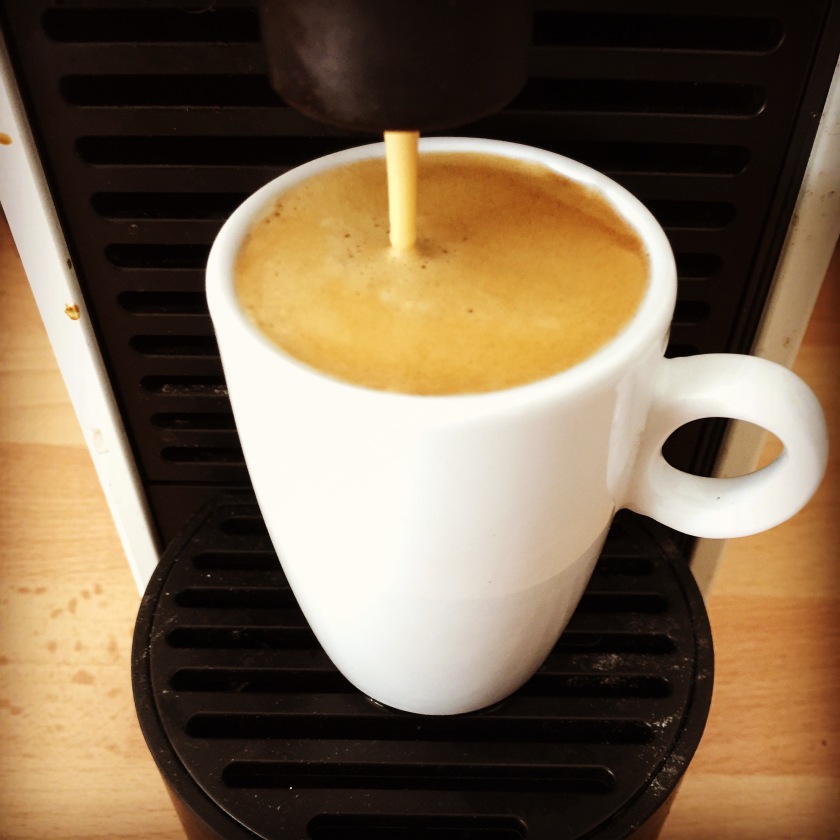 (Big shout out again to Lidl for their stupidly cheap but amazingly tasty Nespresso pods!)

I’ve come to realise that although it sounds a bit trite the reality is that with Slimming World when I fail to prepare, I prepare to fail. As long as there was something hot and ready to eat later I wouldn’t be tempted with anything else, and would stay on plan.

I have 6lbs to loose before I get my 3 stone award. I woke up this morning wanting it BAD.

I’m trying for a no snacking day today – so it was time to fill the slow cooker.

Chicken curry stew (as I make it lately) is stupidly simple, and just requires two syns on the Pataks curry paste (1 level tbsp) for a really flavoursome meal that’s dead easy to prepare. Just chop it all up and throw it in. 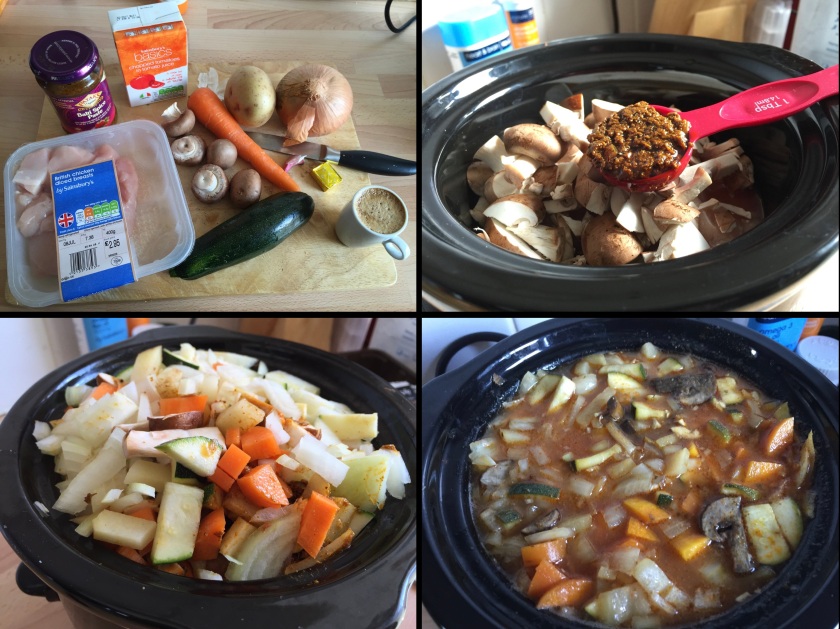 By the time this has finished cooking (the 4th screenshot is after about 3 hours, but I’ll leave it for approximately 10) it will have thickened and reduced down by about an inch to the point where it looks like a thick broth that will fill about 2 bowls. At this point the chicken will be falling apart and the courgette will be mostly mush – adding wonderfully to the texture.

Importantly as well the ‘speed’ ratio is well over a third of the final meal.

And no – I didn’t put the coffee in too – that just looks nice on the chopping board. Everything looks better with coffee! 🙂

Once this was in the pot and turned on it was time to prepare breakfast – and this had to be oats and berries. It goes so well with a sunny Sunday morning that its next to impossible to NOT have. I prefer mine with cinnamon and a spoonful of Truvia (stevia based sweetener). 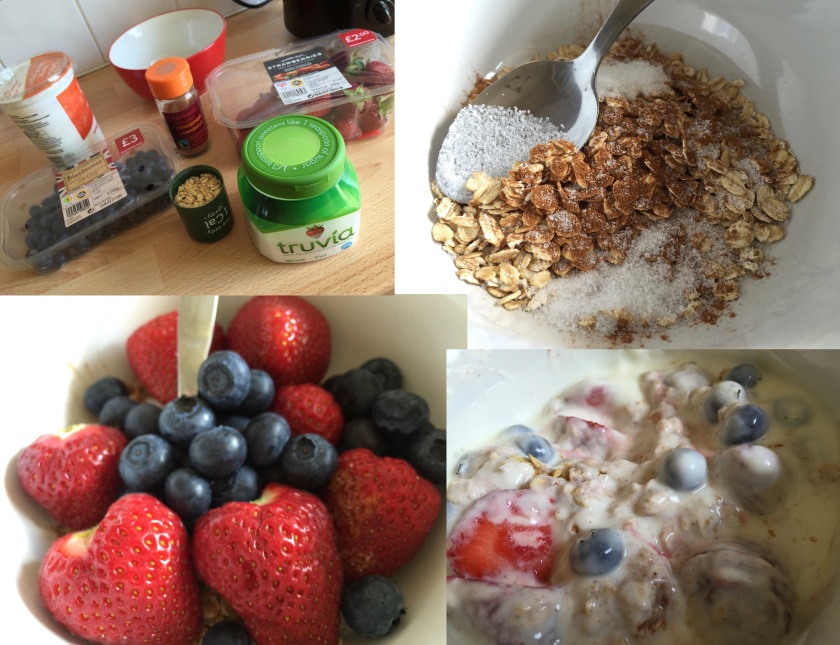 My healthy extra ‘b’ choice is the oats (35g). The blueberries are ‘free’, the strawberries are ‘speed’ and the Sainsburys basics natural yogurt (250g) is 2.5 syns.

The added benefit of this is that the oats are good from a diabetic perspective (as is the stevia) and slowly release carbs throughout the day, rather than causing a blood sugar spike. Both meals are a win – and I can’t think of a better way to spend 4.5 syns out of my daily allowance of 20.

Importantly for me the syns I’m using here aren’t crap.

The alternative (a few months ago) could have been this 40g bag of Chilli Heatwave Doritos. This snack, which would barely touch the sides with me, and CERTAINLY would not fill me up, would set me back 9.5 syns.

When you consider the alternatives I know which meals I’d prefer.

However – each to their own. If people need these kinds of snacks so that they don’t go quietly crazy with their eating plan then they should use them. I may well have a bag sometime in the future. I may not.

It helps however to be highly aware of what it means to my plan if I do.

So – thats my positive start to the day.

I’ve made things look neat, tidied up, had a bit of gentle exercise in the process, made some lovely food (I also just ate some salmon and stir fried veg for lunch while typing this which was as speedy as heck!) have been to the tip with my recycling and out for (yet more) coffee with my brother and his wife.

It’s definitely better than sitting down feeling gloomy about life.

So internet – if things feel crappy today, get up and do something to make yourself feel better. A good mood doesn’t just fall in your lap. Sometimes you have to make it yourself.

Push the hoover about and get your pulse up a little. Make something worth eating. You’ll feel better and if you do and your body will love you for it. I bet you’ll be in a good mood for the rest of the day.