There’s a small but lively group of people at Slimming World in the school hall seated around me and in the background Angie’s portable stereo is playing a selection of pop songs.

I haven’t recognised a single track so far, which I think means I’m an old fuddy duddy – but they’re pleasantly distracting. I like the hubub of Slimming World and the chatter of people before the meeting starts. There’s always an energy to the group and its nice to sit and absorb it.

There’s also a lady walking around offering raffle tickets to the everyone at’50p for a strip’ which is poking my bawdy sense of humour with a long pointy stick.

Every fibre of my being is being mustered to suppress my inner Sid James who would probably be ill recieved with his double entendre reply. I decline the raffle tickets and hold back my ‘Carry On’ cackle.

The truth is that regardless of my untapped potential for smut all my loose change is at home since I emptied everything out of my pockets before I came out. I travel light when I’m weighing in.

If I could wear a mankini to stand on the scales I may just consider giving it a go – but currently I think thats a spectacle no-0ne needs to be subjected to.

The group is a positive one at the moment and everyone seems to be in a good mood. Angie has just moved to the front and asked someone to press pause on her doo-dah (her pet name for the stereo).

(The music stops. Our intrepid dieters and devilishly handsome blogger listen to the group chat…)

Well as always it was a good group full of positive and and helpful people – some of whom met some impressive milestones, including a happy target member sitting in front of me in a summery cobalt blue dress who hit her ideal weight and got a nice little certificate and badge.

I noticed that even at her milestone of success she still commented that she felt she hadn’t done so well and was beating herself up for some chocolate she’d eaten.

I’ve seen myself do this many times before. Snatching defeat from the jaws of success, and not focusing on the evidence that I’ve done well. I wanted to say ‘Hey! You’ve done good – feel proud!’ but I thought it might be a bit forward.

Thankfully Angie was there to re-frame it and highlight the positives. The lady had lost weight – and therefore she must have done something good to get there.

The woman in the blue dress admitted after being questioned that she ate speed food with everything, and it transpired that while she may have had the occasional treat, she was doing really well elsewhere.

She then shared that next week was a new clothes shopping trip and I felt a big grin spread around my face. I clapped extra hard for her. I didn’t know her but I was happy that she’d achieved her goal.

She’d climbed her own mountain and as she metaphorically stood with her Slimming World flag in hand at the summit she embodied my own hopes (and fears) for the future.

Everyone clapped for me and smiled. Its always a little embarrassing when people do things like that but also honestly it makes me feel incredible and its great to get a pat on the back.

I set my sights on it, accepted my mistakes, made the changes I needed to, and executed my plan.

I couldn’t be happier!

However – my celebration has been modest. I rocked up at M&S a few hours after group (Starbucks with my bro beckoned prior to this, and regular readers will know caffeine is more important than air to this blogger), bought a large punnet of Santini tomatoes, and some honey roasted salmon and ham pieces.

Whilst (still) munching my tomatoes and reasonably sized (but slightly over priced) lunch I realise I feel good about my achievements today on a number of levels. With all the things going on at work and pending redundancy I can’t think of a single thing that I need more than to feel positive about myself and my capabilities.

I’m beginning to visualise myself in smaller clothes, presenting myself to a potential employer in the future, and knowing that I will represent value to them.

Rather than sitting and feeling glum about such challenges like I used to (and doing sod all about it other than drinking and eating more) I’m now continually trying to improve in a structured and planned way, and it’s extremely empowering.

My first stone and a half off!

I’ve now lost one stone eight and a half pounds. 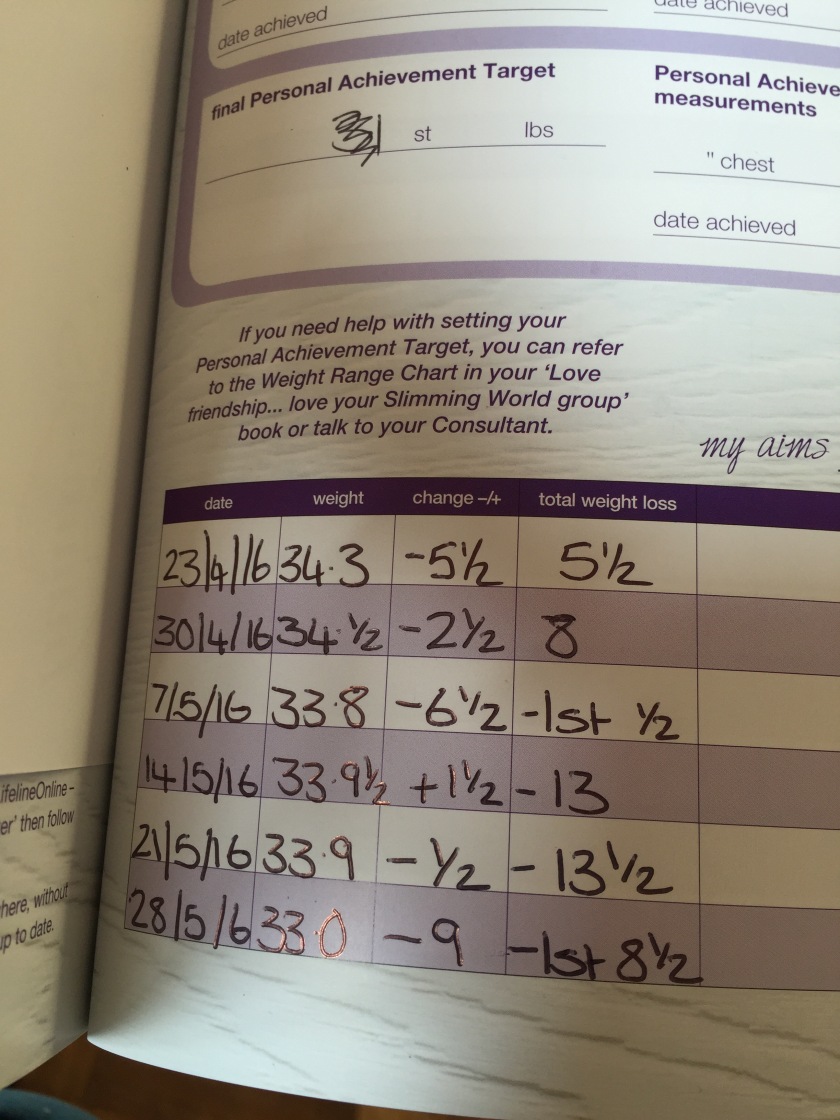 I’m not a glory hog – but I’m taking this major victory and I’m nailing it to my mast. I want to remember how I feel right now, today and use it again and again.

Also today – I had the first person since I started Slimming World look me up and down today and say I’ve lost weight, which was immensely encouraging. It also happened to be my brother, whose opinion means everything to me so it was doubly sweet.

If anyone is interested in what I ate this week (and they’re on their own journey) here is my seven day food diary. Feel free to comment if you want. As you can see I’ve not been starving myself – but I’ve also not been eating crap.

With a few exceptions my appetite has remained satiated and portion sizes are currently under control. I’ve only veered off what I would considered to be a ‘normal’ portion twice during the week – which I’m taking as a win rather than a failure.

With that internet I’m going to (munch) carry on (chomp) eating my (munch munch) apple and my (scrunch) tomatoes, which are (gulp, chomp) absolutely (swallow) frigging delicious (sigh…)