So. It’s Saturday. The fulcrum of my week. As per (what is becoming) usual I woke up at 7.30 thinking about how I might have done, and what the scales would say.

I haven’t found this week easy on some of the days – and periodically it’s been hard to not get down and beat myself up.

I also felt like I’d eaten well. TOO well if I’m honest.

I’ve had many an evening where I’ve felt absolutely stuffed after a meal – and had worried that although I was eating the ‘right’ things that I may have been eating them in the wrong quantities.

I know that portion control is something I need to address at some point – but at the moment it’s remaining on my list of to do’s. I’m hoping I can avoid it for a little while longer as it’s keeping me sane currently.

I still have a very big appetite.

Last night I dutifully wrote out all of the things I’d eaten during the week (I’d put it all in a notepad on my phone) in the format Angie/Slimming World prefers.

I hate separating out all the food types instead of writing them down as meals so I’ve decided that this is the least annoying way to complete this task. Plus it allows me to re-assess in one go wether I’ve had a good or bad week.

Strangely it didn’t seem so bad. I was a bit surprised. Was my perception so different to the reality of what I had eaten? Why had I been beating myself up?

As I looked at it I confirmed that I hadn’t forgotten anything and re-checked the list.

While I had the phone app open (to check food values and types) I decided to have a look at what I might have had in the past on a typical binge night 3 months ago.

Given I should have 30 syns (for mere mortals it’s 15) a day this would have come to approximately 163 syns in one evening. A NORMAL evening when I was drinking.

I could often eat or drink a lot more, and this didn’t include the daytime.

I haven’t worked out what an entire full size Dominos pizza comes to, but sometimes they also featured in an evening’s self destruction.

I dread to think.

All of this was on my mind when I stepped on the scales. Today I was in jogging bottoms, rather than jeans. I thought I’d need all the help I could get.

The world went a bit silent and the lady watching the meter said quietly ‘well done that’s •••••• off’.

I hadn’t heard her and asked again.

‘Six and a half pounds.’ She said, this time a bit louder. ‘You have your one stone award.’

I stepped off the scales, stunned.

14.5lbs is now in the toilet or ozone layer or washing machine or on the floor, or wherever the hell it goes.

Not that it really matters. It’s no longer on me which is a real bonus. 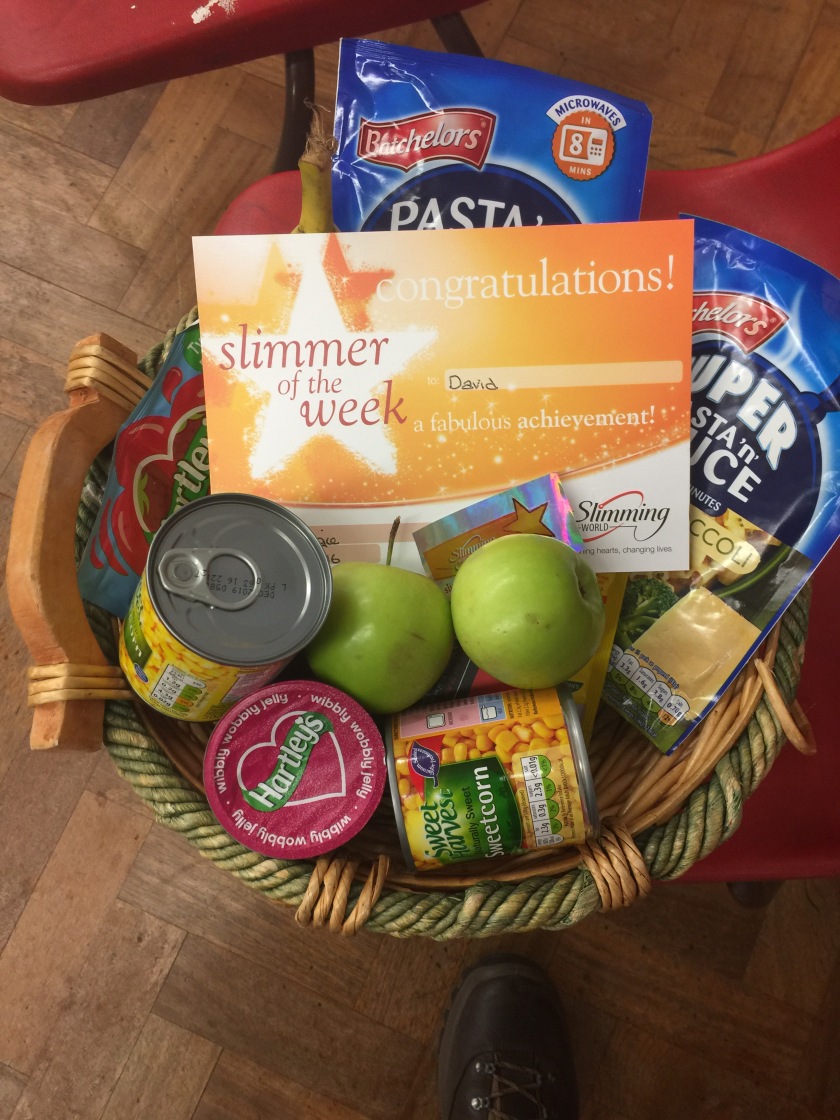 I’m not sure what I’ll do with them at the moment but I’m going to put them to good use – as for the most part they’re store cupboard friendly.

Whilst in the meeting I had a text – my friend was unexpectedly in town and wondered if I fancied meeting in Solihull at Starbucks for coffee.

I quickly checked Google. The Pope appeared to still be Catholic and all evidence suggested that bears were highly likely to defacate in wooded areas.

Now – this to most is not a big deal. So let me explain before I continue.

It’s been sunny all morning and warm. My very least favourite weather. It makes me sweaty and self conscious.

On the way to Slimming World I parked up with 10 minutes to spare, walked in and realised I had forgotten my book (where my weight is recorded) and meal planner (for Angie to review).

Old me would have continued without them.

I decided to drive home, rush into the house, get this and drive back, and walk in again. I’d also walked from the car into the group – stood in the line to be weighed and then sat down.

Previously this would have seen me out of action for a while, and most likely in pain. Not today.

I was feeling really good. Not at all like I used to. I wanted to go to meet her.

I covertly arranged to meet in an hour or so with a few texts while Angie talked and  then waited for the meeting to finish.

Once it was done I skipped up the stairs outside the school, jumped in my car, got home, briskly walked up my path, opened the front door, quickly up my stairs, got changed, forgot my wallet, went upstairs again to get it, came back down again, texted my friend, headed off, parked up, walked through John Lewis, through Touchwood mall, waited in the Starbucks queue, walked up 3 flights of stairs to and sat down with my drink.

I hadn’t started sweating. My back wasn’t hurting. My knees weren’t screaming. I wasn’t out of breath. I didn’t feel bloated and miserable, dreading the moment when an acquaintance I hadn’t seen for a while would look at me, visually register I had put on yet more weight and not say anything about it.

When my friend arrived we sat and talked while her daughter watched Postman Pat on my phone.

I had good things to report and good thoughts to share. I felt good.

I felt happy, and I was able to share that mood and positivity with someone I care about.

We talked about what she wanted to do to get fit again herself and about the insane number of syns in crisps. We chatted about things we both wanted to do, and what we were doing to achieve them.

It was a good conversation.

We hugged and went our separate ways, with her daughter waving to me as I disappeared up the escalator in John Lewis to collect my car.

I’m now in another Starbucks writing this. Because I can. Because I feel like I want to be part of the world and at the moment I have no interest in sitting at home alone in my armchair.

Hell – I feel so good I’m willing to use because at the beginning of a sentence.

Because I want to.

Because I’m just that kind of bold italic crazy.