Destiny is the digital version of crack cocaine.

If (like me) you’re the type of highly intelligent, erudite and devilishly handsome person that plays video games and you’ve never tried it then part of me suggests you play it immediately because it’s without a doubt one of the absolute best first person shooters ever created.

Another part of me, more concerned with sleep deprivation and eye strain is likely to caution you against playing it altogether. Once you start it you may well get hooked.

Destiny’s major bonus is that although it doesn’t make me loose calories it doesn’t contain any either. If it did I’d probably be the size of a barn door, since (as mentioned in previous blogs) I’ve played it a lot.

In the last two years, according to worrying statistics it accounts for 28 days, 5 hours and 55 minutes of my life. The one saving grace is that my friends have played it with me for a significant portion of this time – which has been a great laugh.

I’m trying not to play it as much these days, but sometimes I can’t help myself.

This morning I woke up at 4am. I was rather excited to be going to Wales and seeing my friend for the first time in a few months and consequently my head shot off the pillow three hours earlier than I had intended.

I was wide awake and there was no putting the genie back in the bottle.

Initially I tried to return to sleep and spent a fruitless 25 minutes intently examining the inside of my eyelids.

They’re featureless and boring and only lead to thoughts of video games.

‘I could complete a couple of bounties in Destiny instead….’ I mused.

‘It would keep me busy and I MIGHT get a sweet loot drop.’

I got out of bed and padded downstairs to play my game.

Two hours later and after many many dead aliens (approximately 100 vex, 100 fallen, 50 hive and around 50 taken) I had no sweet loot, just eye strain and I felt tired.

I’d been suckered again by a game that’s both brilliant and infuriating in equal measure.

It decides when it wants to pay out loot – not you. There’s next to nothing you can do to ensure that you’ll get what you want. Often you feel like you’re just along for the ride – which would be bad if the ride wasn’t so exciting. Unfortunately though when you boil it down it’s basically a hugely complex fruit machine that I keep pressing buttons on.

Consequently when my 7am alarm went off I was dead to the world. The only thing I was remotely interested in was pressing snooze – which I did three times.

When I eventually got out of bed I was running at least 10 minutes late.

This resulted in not two, but four slices of burned toast, as I managed to kill two batches of breakfast whilst pulling on trousers and socks.

As I set off late to Cardiff (well – if I’m being specific Cowbridge) I also failed to notice that Google Maps had chosen a route that took me via a toll bridge. An hour and a half later on the wrong side of a huge waterway I had no choice but to pay to get through.

I arrived early at 10.15 outside Cafe Nero in the Waitrose car park (proudly proclaiming its 2 hour wait time at the entrance) thanks to this minor financial sat-nav faux pas. As it happened this enabled an unexpected short period of relaxation. My friend, nursing an ill youngster had been up all night and just like me had overslept.

She would be a little while said her text, but would be there ASAP.

I purchased a large Americano in the almost completely empty shop and sat down to check the news and see what was going on in the world while I waited. 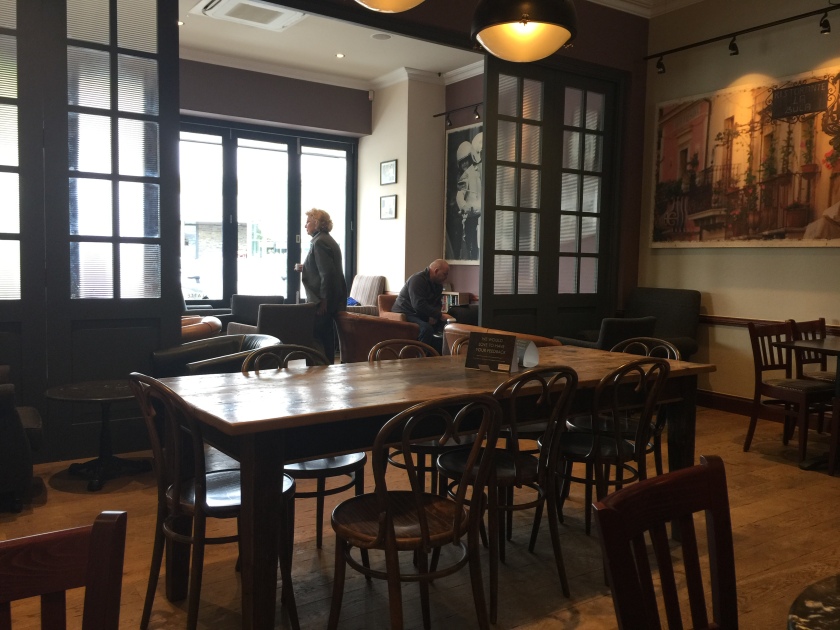 As with all the best friendships time had once again failed pathetically in its attempts to separate us and we instantly launched into some hardcore nattering. It was as if we’d seen each other only the night before.

Time flew by as we chatted, drinking obscene volumes of tea and coffee and sharing stories about what had been going on in the last few months.

Both of us have had interesting years, and faced our fair share of very similar challenges. Thankfully we’ve always been able to provide a compass for each other and I always find myself drawn to her advice.

We stopped talking only to move coffee shops and hopped from Cafe Nero to Aroma Cafe two doors down.

This was primarily so we could move cars to confuse the 2 hour parking Nazis as they goose stepped back and forth outside. I noted that they occasionally clicked their heels together and saluted a black shirted colleague as they noted down offending registration numbers under Waitrose’s ever watchful searchlights.

Collectively they looked like fantastic contributors to the rich fabric of society. Their mothers would be proud.

As this new cafe served light meals I quickly took the opportunity to inhale a baked potato with tuna and my friend also gulped down their best toasted bagel with some pink salmon.

Oddly, neither of these had any of the Cafe’s implied aroma, but I decided not to ask for my money back as I was in a good mood.

Shortly afterwards the stealthy but friendly staff carefully disguised their intentions toward us by continuously cleaning everything nearby, saying goodbye loudly to everyone leaving and offering us a choice of the day’s newspapers and supplements to TAKE HOME and keep.

Despite the subtle nature of their almost indecipherable hints, we got the message and at 4.30pm finally stepped out blinking into the bright grey drizzle of a fine Welsh afternoon for a big hug and to head off in our opposite directions.

It was a wonderful day out – and I left my mate feeling positively charged, despite the weather facing me on the way home – which in the best of Welsh traditions was wet, damp, waterlogged, rainy, moist, and generally sodden all the way to the English border.

Upon reaching the edge of civilisation it suddenly turned into an infinitely superior ‘grey and pissy’. This subtle shade and outlook is one that everyone in the English home counties knows and loves for its infinite (but rarely realised) potential.

So – now I’m home and the day (I feel) has been a minor triumph.

I’ve shown hundreds of alien b*****ds the error of their ways, driven to Wales and back without bumping into anything, hooked up with my mate, helped reduce the country’s dangerously high coffee surplus, set the world to rights, stayed on plan with Slimming World with my saintly baked potato and now have my feet on the comfiest pouffe in western civilisation watching the telly.

Life, frankly doesn’t get much better than today. I’m happy with my world and what it’s once again becoming. I’m a lucky man with good friends – and I  have absolutely nothing of consequence to complain about.

Now if you excuse me I’m going to have a teeny tiny nap and sleep off my tupperware box full of last night’s chicken curry. Which was yummy.