I was quite lucky when I was younger. At the time I just accepted it, but now I realise that the freedom I had as a child was more than children today appear to have, and there’s a lot more fear in society around child safety.

Sure it’s a good thing to be safe – and parents need to be aware of dangers – but it also means that the endless exploring I did in parks with my friends, and with my dog (Will) is something other children don’t seem to do any more.

We used to take long, aimless walks along the local green belt and spent many happy hours just watching the world pass while sitting under a tree (1).

It’s changed a bit now – but looks mostly the same from what I could see as I drove to my mom’s nearby bungalow. There are a few new swings and slides, and houses have encroached a bit on what was once green but its essentially the same park I remember. 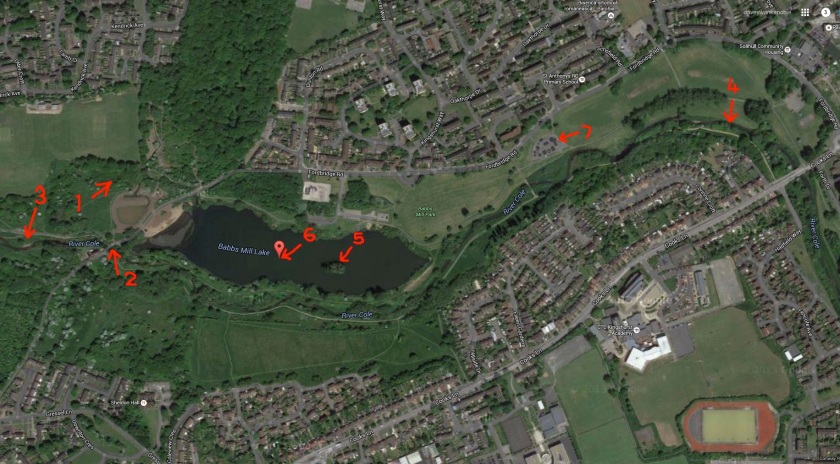 From where I grew up you could actually make your way almost completely into the centre of Birmingham totally through parkland along the path of the River Cole (which I did a couple of times). There was the occasional road in the way, but these usually had bridges, which were also great to sit under and watch the water go by.

There was one particular bridge in this park where for some reason myself and my friends always sat underneath in the shade (2). It had badly cracked concrete either side, which had failed in such a way that it made almost perfect seating for teen bottoms. The grass was worn under the bridge by the continued presence of children, and the hard dirt bowed into a basin where our feet dangled or stood.

We could also often be found playing pooh sticks here as we stopped for a break on our way to wherever we were aimlessly wandering to.

Just next to the bridge was a largely disused building, from which the park gained its name – and was known locally as Babbs Mill. I always imagined that a mad old man lived there – but I never once saw a single soul enter or leave. The place still holds an air of child like mystery in my mind.

Since a lot disappears with the passage of time I honestly don’t remember what as a child I talked about with my friends, but I do remember feeling relaxed and close to them when we watched the river go by, sheltered from rain or sunshine by the rusting steel above us.

The river was also special, and I regularly on hot days waded into it at my favourite stone skimming spot (3) and walked along the river bed in my shoes. This was much to the annoyance of my mom who often saw new leather trainers mysteriously turned to stiff cardboard almost overnight.

I actually waded about a mile down it one particularly sunny and hot day. My friend walked initially with me in the water and then as it deepened alongside on the bank, just to see how far I could get.

When the water level reached my teen testicles (4) I realised the folly of the operation and made my way to shore, realising only when I got out that there was a thick green tide mark  below my trouser waist that would be difficult to explain when I got home.

One winter the man made lake in the middle of the park completely froze over, and my friends and I were amazed to see people walking over to the island in the middle (5) – which previously I had never set foot on.

Plucking up all my courage I walked with my companions over the creaking and cracking surface to this forbidden territory, and stood there with them – exhilarated and almost too scared to go back.

As we plucked up our courage and gingerly made our return journey over the ice to dry land I noticed that some older boys (proving that age doesn’t always correspond with wisdom) had gathered in the middle of the lake (6) and had made a bonfire there. They were sitting around it eating, laughing and joking – all completely oblivious to the danger they were placing themselves in.

(This video on YouTube – not made by me – shows the island on the right from the bank, and you can see the birds sitting on the ice as they did.)

When I reached the shore Will slipped on the ice and fell in at the edge. I quickly pulled her out of the water by her lead and collar, shocked and bitterly cold. She sprayed us all with freezing water as she shook herself off trying to get rid of the moisture. I scooped her up and placed her under my jumper, as I tried to get her warm and dry – in the process making my own teeth chatter. She nudged her sodden head past my chin and out of the loose neck of my clothes, unwilling to miss what was going on despite her shivering.

Will stayed there for a good portion of the journey home until she had warmed and dried.

The lucky older boys never fell through the ice, much to my complete amazement. I could never walk past that spot again without marvelling at their stupidity.

Further down from the lake was a children’s play area with two metal slides. The larger of the two started at the top of a small hill, and although it was terrible for sliding offered other opportunities to an inventive young mind (7).

With nothing to do one summer my friend and I spent several hours sitting on the swings and then taking it in turns to lie under the slide with our mouths open as the other attempted to roll a sweet from the top to the bottom in a precision bombing operation.

The 1980’s sweets in question were called ‘trillions’ and were silver, shaped like tiny 3mm aniseed flavoured ballbearings. They coated your fingers and the bag in which they came in this silver dust, and were probably highly toxic, but infinitely pleasurable to suck in large numbers.

Watching their chaotic bouncing descent on the slide was for some reason hilarious at the time. I couldn’t stop laughing at the noise they made on the metal and the complete impossibility of hitting the intended target by anything other than random chance.

After nearly choking to death several times during our game we realised the folly of it and headed off on our bikes to find another source of amusement.

Still – if they were I might go and find a slide somewhere just to roll them one by one, purely for the sake of nostalgia, and the skittering sound they made, which I can still hear today.

Childhood can be crap – and it frequently was for me, but sometimes it can also be absolutely bloody awesome, and give you memories you’ll never forget.

Parks and dogs, and childhood friends…