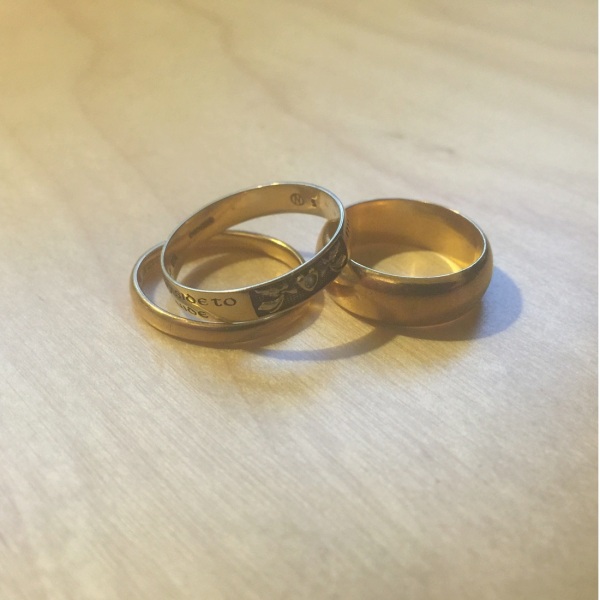 I left work a bit early today to visit the funeral director for the last time. I’d been putting off collecting my mom’s rings for long enough.

The traffic was absolutely awful, and as I sat at a complete standstill on road after road watching swarms of schoolchildren crossing behind me, in front of me, to the sides of me and (it seemed) underneath me I realised what an idiot I was to think I’d picked the right time of day to make the journey.

By the time I got to my destination I was about as annoyed as it’s possible to get when faced with largely stationary traffic and idiots in Range Rovers who try to drive round you as if you have eyes in the back of your head then cut in to traffic to save precious milliseconds whilst nearly causing a collision.

It isn’t enough that these impatient arseholes survived natural selection. They have to rub your nose in the reality of their continued existence by driving a car thats 10ft feet higher than yours with tyres that would suit a bus.

Such desperately retarded brain donors then suddenly loose all peripheral vision when stuck parallel to cars they’ve unsuccessfully attempted to cut in between of and pretend to be absolutely oblivious to your presence.

After my third lengthy effort to stare one of them to death resulted in abysmal failure I resolved to calm down, move the radio on to Classic FM and focus on the task at hand.

The point of my journey if I’m honest had definitely contributed to the tension. I didn’t really want the rings.

My mom’s ashes were already long gone. My brother and I directed them to be scattered at the crematorium, as there didn’t really seem any other appropriate place. Her physical remains therefore were no longer an issue. The only task left was to pick up the jewellery that we had been unable to get at the hospital when she died.

Mom never stopped wearing her wedding ring after my father and her divorced, so it wasn’t surprising to find that it still on her finger when she passed away. I’d always assumed that the other rings were related to Dad, as she had two gold bands and a third, smaller one.

I rarely paid attention to her jewellery, which was mostly eccentric, covered in butterflies and sourced in Poundland along with anything that had ‘silver’ written on it.

However tonight, when I got home and looked at one of them I noticed that it housed a tiny stone and had a delicate inscription engraved around the outside.

Not being of a religious persuasion I Googled this and the majority of the links appeared to point to this being a Catholic prayer. My father is most definitely not of that faith and I couldn’t imagine him giving her anything like this.

Curious, I contacted him and asked whether the ring had any special significance. It seemed however that this wasn’t from him, and neither was the smaller gold wedding band. He didn’t know where they were from.

Only the larger gold band appeared to jog any memory, and it was this one that symbolised their marriage.

The others it seemed were most likely the remains of my mother’s first marriage in 1962, which was to a Catholic.

She and he had (by all accounts) a violent and tumultuous relationship, which resulted in her absconding a year after they married and ultimately divorcing him in 1972 before hitching her wagon to my dad.

So why was she wearing the rings from her first marriage when she died?

She still bore her first husband’s surname when my dad and she met, apparently having no willingness to officially separate unless she was going to re-marry (according to my uncle).

I’ve never thought it odd that she kept wearing my father’s ring, as she was completely unable to let go of the fact their marriage had failed and despite her bitterness professed love for him (usually in a manner that suggested the absolute opposite) until the very end.

This marriage (just like her first) took close to a decade to legally draw to a close – and despite their estrangement she bitterly fought against a second divorce. To her such a thing was inconceivable.

In conversation my mother often retreated to the events of the past in order to provide justification for the arguments of the present, and seemed unable to move on from any event where she felt harsly treated. When I was at home her daily reality often hovered somewhere between 1968 and 1978 and she chewed over the fat of this part of the past whenever she could.

This period was in retrospect one of recovery from violence, and renewed love. It was also one which letters showed was not easy for her, and she did not end up with the life she expected.

One had to be careful therefore (both then and in later years) to avoid heading toward many subjects relating to this period. Whilst this pivotal decade provided her with many happy memories these could quickly link to ones of bitter unhappiness. Once you entered this territory there was rarely an exit sign that was easy to find.

I never heard in all the years I knew her a single reminiscence of her first husband that was positive or forgiving. Given the level of violence I have been told about independently of her version of events this is probably understandable.

I’m not sure then (with these contexts in mind) quite how to view the three of these. Part of me wants nothing to do with them, but like with her bear I know that if I give them away or sell them because I don’t like how they make me feel, in the long term I will do myself a disservice.

One of them symbolises her union with my father, which is a good thing (despite its many tempests) because my brother and I are alive and are inseparable friends. My Dad is also slowly beginning to find peace with the past as I am, so that too is positive.

The other two symbolise a violent, impulsive and often confused past. A part of her life I thankfully wasn’t alive to experience.

The three combined could be interpreted as an unwillingness to let go of the past and move on… but also maybe they show a need to remember past love, however wrong it may have ultimately turned out.

I don’t own any other item that is made of gold since I’m not much into bling or displays of wealth, and I’m not married. Because of this I’m surprised by how heavy these small items are when I hold them in my hand.

Their emotional weight is much the same.

I think I’m going to keep these rings, and get them out of storage again in a few years. It will be interesting to see what they mean then – and what I will feel when I look at and hold these strange little bands of metal.